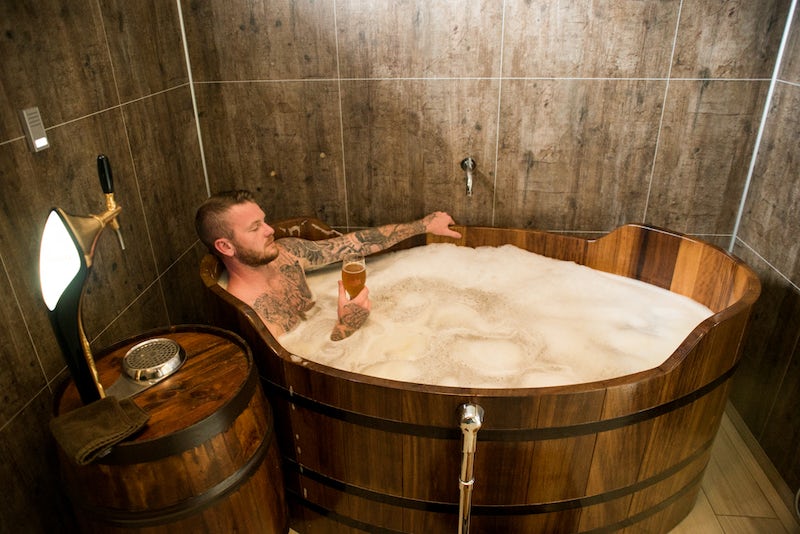 Ever dreamed of soaking yourself in a tub full of beer? Well, your dream could actually come true. The Beer Spa, located in North Iceland, offers visitors to bathe in hot tubs filled with warm beer while sipping on some cold craft beer.

Iceland‘s very first beer spa will be opened it's doors on the 1st of June 2017.

Located in Árskógssandur in the north of Iceland, you will soak away the stress of modern life by relaxing in a bath of warm beer.

Beer yeast is used in various ways, the most common, is a tablet form where the effects of the yeast are very benefitting.

Beer bath, where you bathe in both young beer and live beer yeast, without showering it off until some hours later, has an extremely powerful effect on the body and skin. The treatment is both cleansing for the skin and has a very positive effect on health

All the tubs also have a draft beer tap alongside, so that visitors aged 20 and over can help themselves to a cold drink of beer while they bathe. We will also have an outdoor beer hot tub for bigger groups and a new restaurant with beer-related food.

You get both towel and a bathrobe when you arrive, with lockers for your valuables.

You don’t need swimming suits for the beer bath but please use them for outside tubs.

Is this experience for me?

​Children of 12 years and younger can go with parents/guardian in the bath for free.
13 years and older pay the prices above.

You don’t need to shower before the bath and we recommend that you don’t shower afterwards for at least 3-4 hours.

What do I need to bring?

We recommend skipping your bathing suits for the beer baths. But if you feel better bringing them, that's all right too.