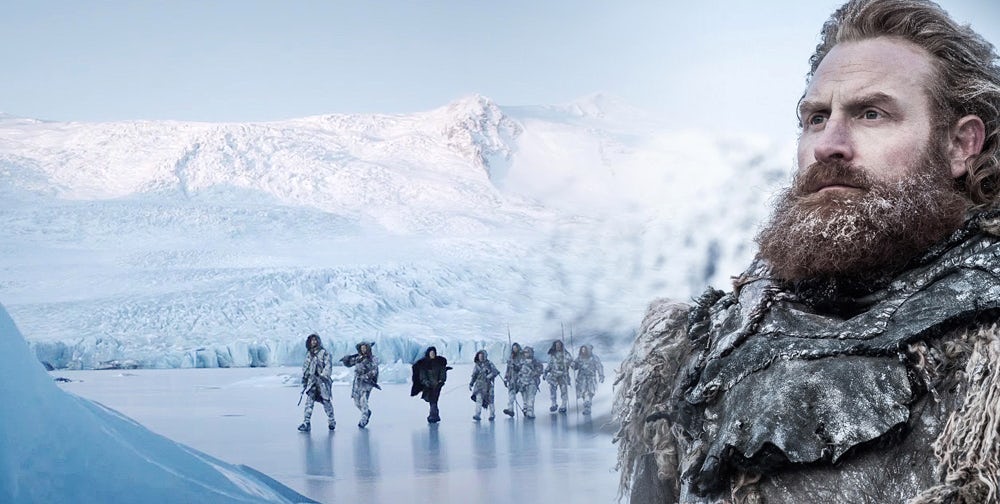 Game Of Thrones Locations in Iceland

Explore all the filming locations in Iceland for the popular HBO show Game Of Thrones.

If you are as much a Game Of Thrones fan as I am, you have definitely noticed the amazing locations in the Westoros world. While we wait for the next season I got together information and pictures from most of the filming locations in Iceland. For each place you can also find information about in which season and episode this location is featured. S03E04 translates to Season 3, episode 4. 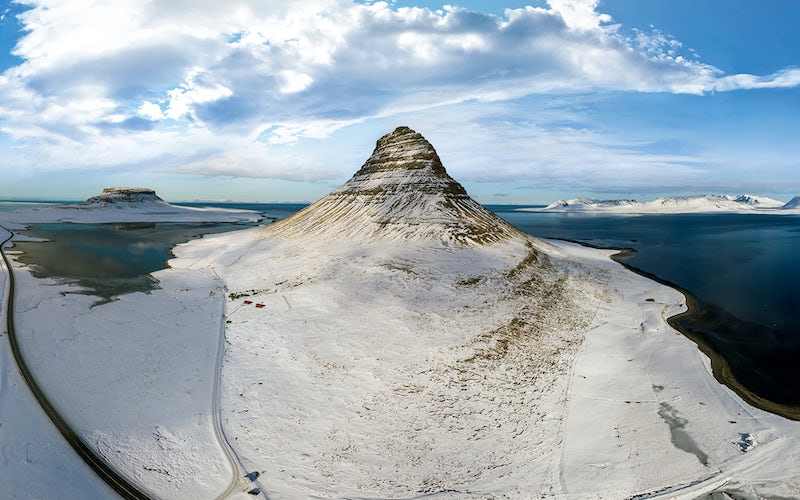 Kirkjufell is on the north coast of Iceland's Snæfellsnes Peninsula and not far from the town Grundarfjörður. It is the most photograped mountain in Iceland.

It can be seen in season 7 episode 6 when the heroes go to north of the wall, described as the "Arrowhead mountain". It also appeared in season 6 episode 5 with Kirkjufellsfoss which is also on the photo, when the children of the forest created the first White Walker. 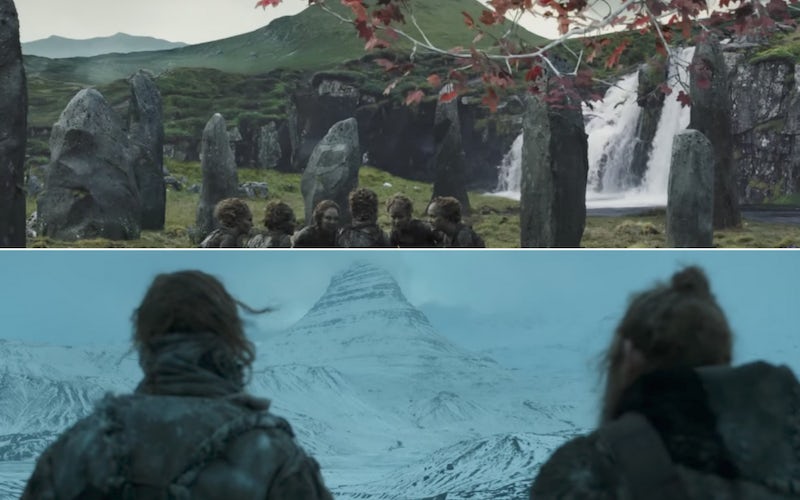 If you want to check out the amazing scenery of the Snæfellsnes Peninsula, we have many tours available: There is a cave tour to Vatnshellir , Minibus tour around the highlights of the area and this one day Mysterious Snæfellsnes tour. 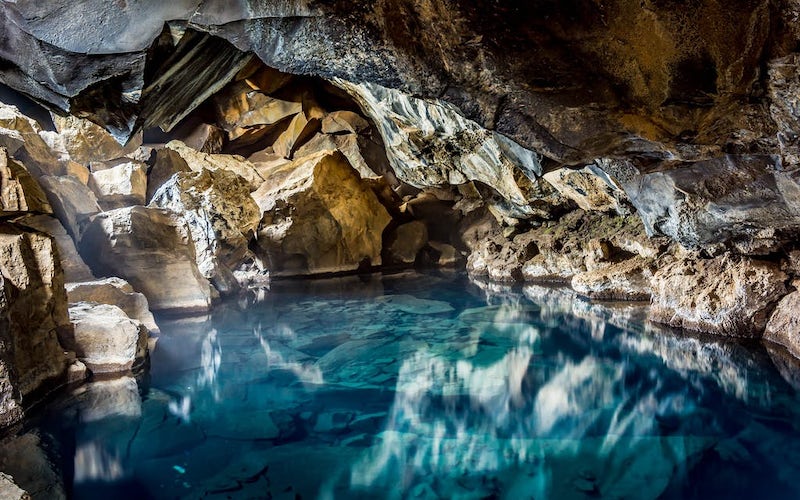 Grjótagjá is a small a cave in the Lake Mývatn which used to be a popular bathing place. In the early 18th century, the outlaw Jón Markússon lived there and used the cave for bathing. Geological activity in the period 1975–1984 caused the temperature of the water in the cave to rise and it hasn't been possible to bathe there since.

This is where the actors Jon Snow (Kit Harrington) and Ygritte (Rosa Leslie) had their moment in Season 3 episode 5. Actually, the steams rising from the hot water disrupted the shooting, so most of the scene was shot in a Northern Irish Studio. 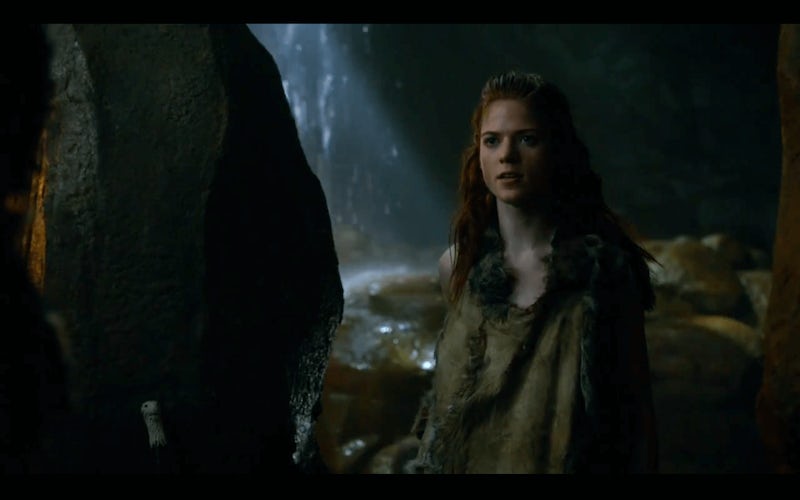 I would recommend the Diamond Circle Tour for those interested in going north of the wall (pun intended). Myvatn Super Jeep Tour also stops at Dimmuborgir, Grjótagjá and Höfði with more amazing scenarios where Game of Thrones was filmed. 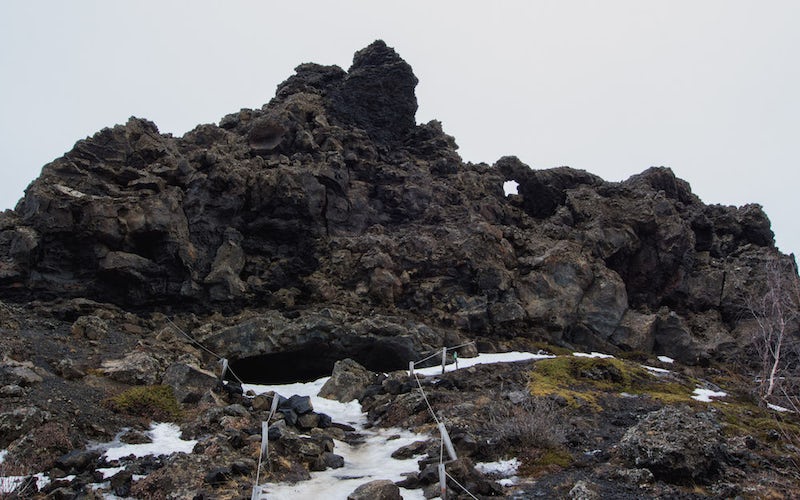 Dimmuborgir is a large area of unusually shaped lava fields east of Mývatn. The area is composed of various volcanic caves and rock formations. It is one of the most popular natural tourist attractions in northern Iceland. According to folklore, Dimmuborgir is also the home of a famous troll named Grýla and her third husband Leppalúði.

This is where the wildlings set up the camp in season 3 north of the wall. It can also be seen when Ygritte steals Jon´s sword and gets him into the cave. 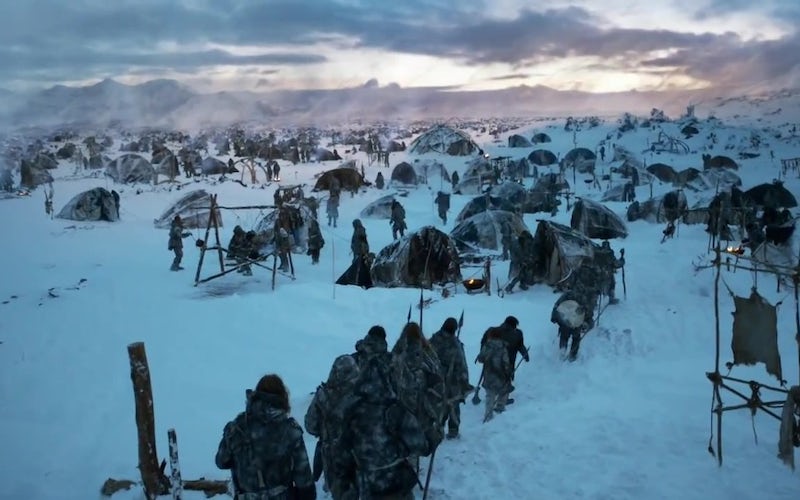 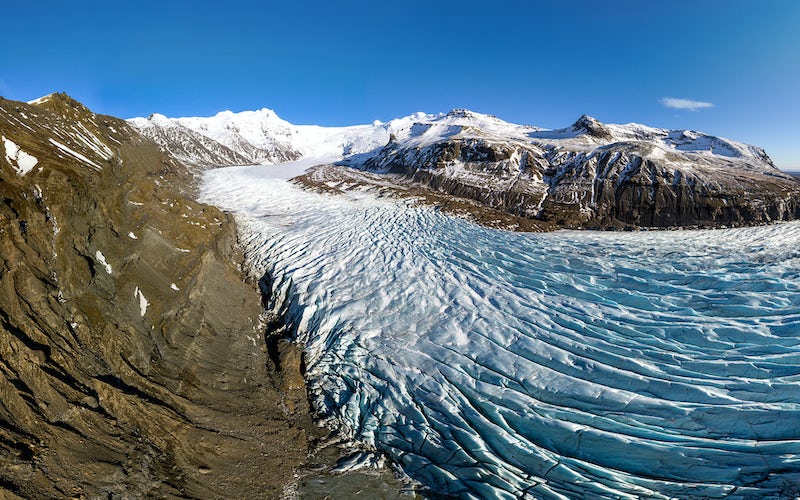 Svínafellsjökull is an outlet glacier of the Vatnajökull glacier that offers amazing views. It is easily accessable from the Ring Road and there are not many places you can visit as close as Svínafellsjökull.

It can be seen in season 2 and 3 as most of the beyond the wall scenes were filmed there. 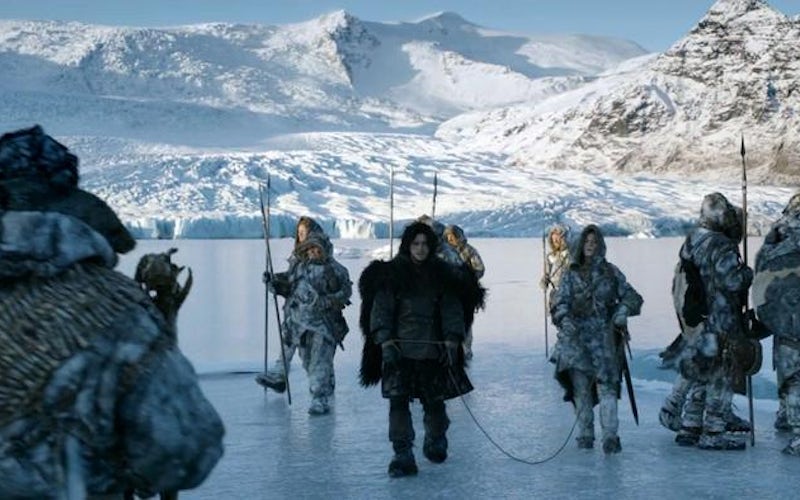 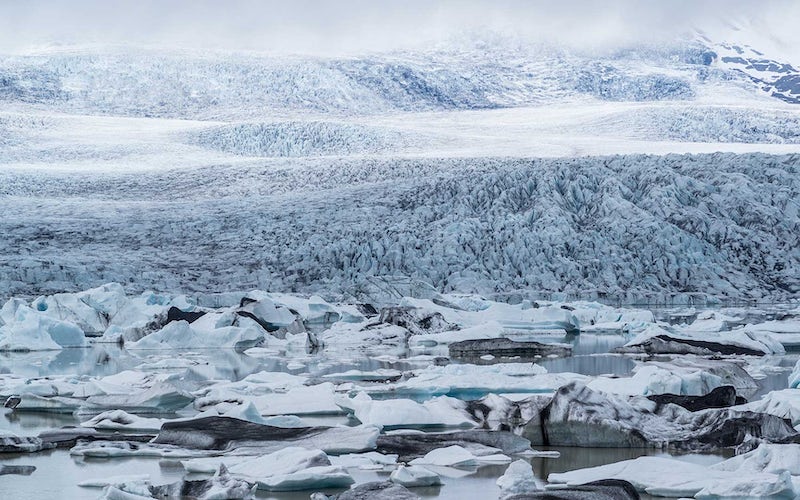 Vatnajölull is the largest glacier in Iceland, and one of the largest in Europe, covering more than 8 percent of the country. Under the ice cap are several volcanoes and volcanic lakes. It was used in the second season as a film location north of the wall. 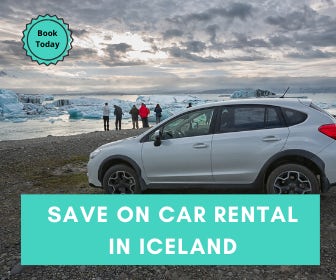 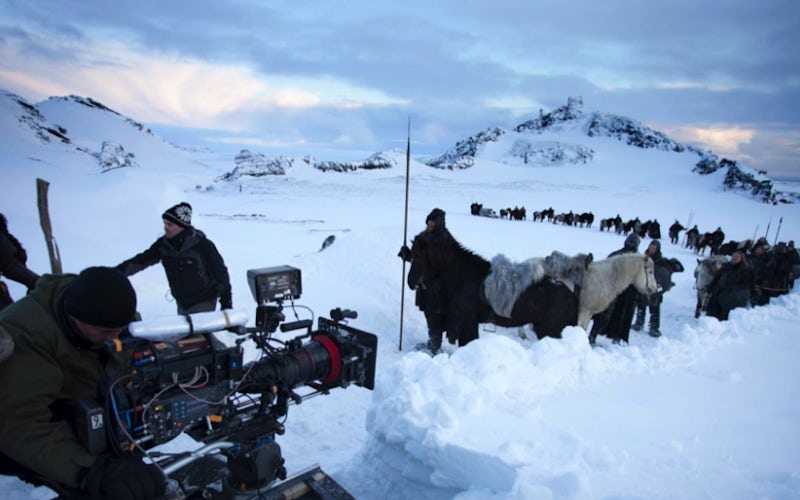 To check out Vatnajökull glacier there are several tours available, a Super Jeep Vatnajökull Glacier Walk tour with a short zodiac boat ride. Also this Glacier Discovery on Vatnajokull Glacier which includes a 4x4 transfer and is designed for those who are looking for an in depth glacier hike in Iceland. Then there is this unique Blue Ice Cave Adventure that offers an unforgettable experience and amazing scenes. 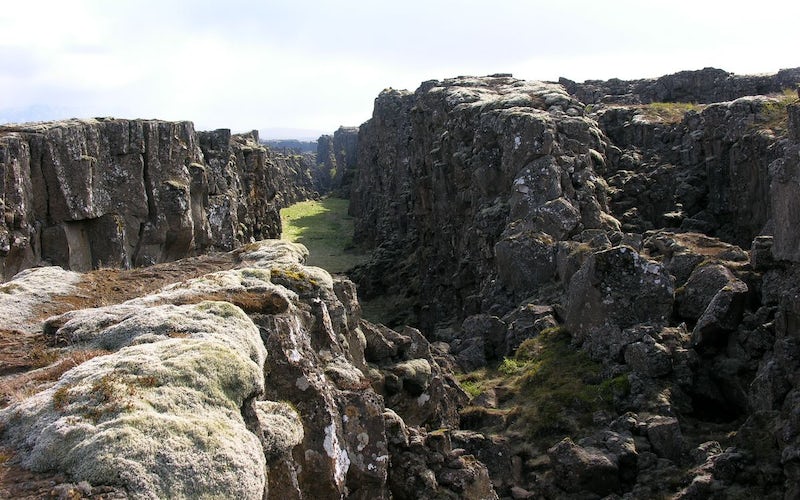 Þingvellir is a national park about 25 mi (40 km) from Reykjavík. It is one of the most popular tourist destination in Iceland as it is a site of historical, cultural and geological significance (also a UNESCO World Heritage Site). The Mid-Atlantic Ridge passes right through the national park and seperates the Eurasian and North-American tectonic plates. 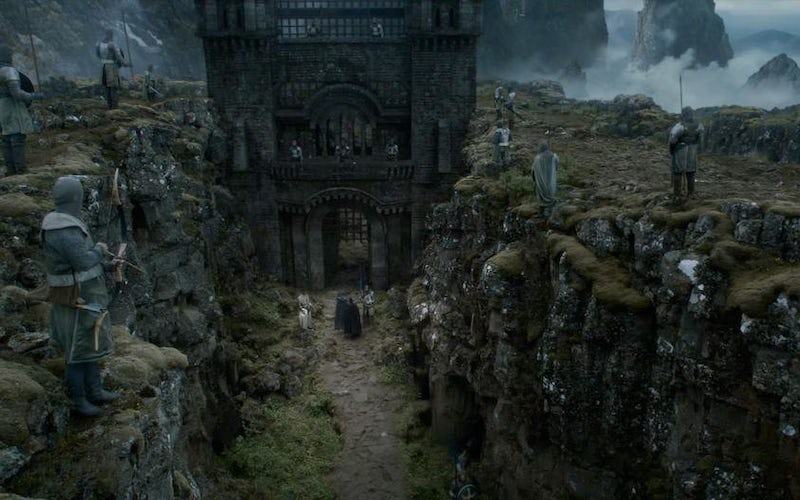 There are a few ways to see the National park and the area around if you don't have your own car. One of the most popular tour is Golden Circle & The Secret Lagoon. But you can also get a combo with snowmobiling - Golden Circle and Snowmobiling.

There is also this amazing experience where you can go snorkeling in the crystal clear water in Silfra, I have done that one and I can personally recommend it to anyone looking for a unique experience. 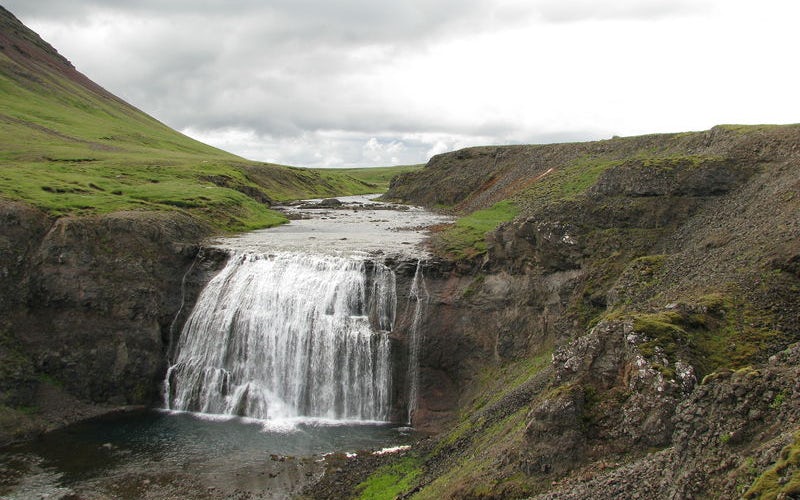 Thorufoss is around 18 meters high and is located near Thingvellir. This is the waterfall where Drogon eats the goat in season 4 episode 6 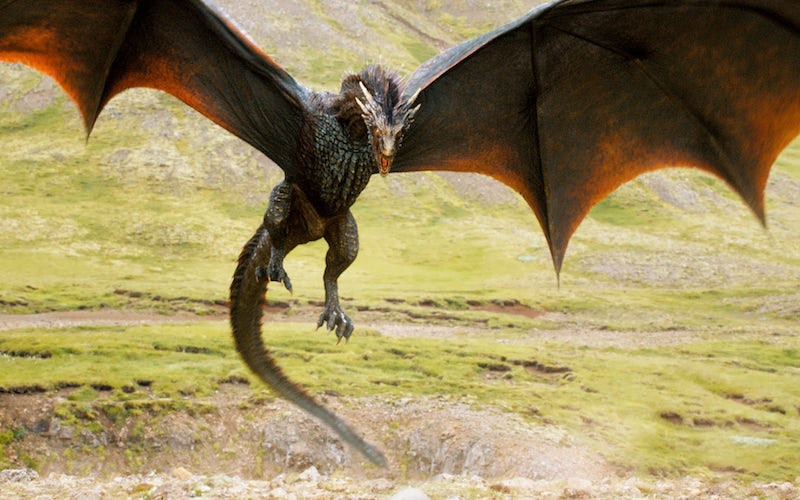 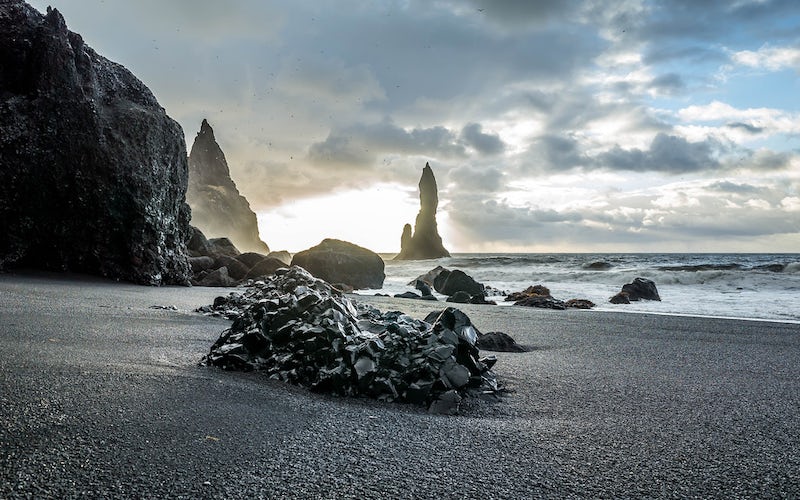 Reynisfjara beach, near the town of Vík on the southern shore, is perhaps the most impressive black-sand beach in Iceland. It features an amazing cliff of regular basalt columns resembling a rocky step pyramid, called Hálsanef. Out on the ocean there are also stacks kalled Reynisdrangar.

It is the beach at Eastwatch by the sea where the men in the night's watch are guarding the wall. 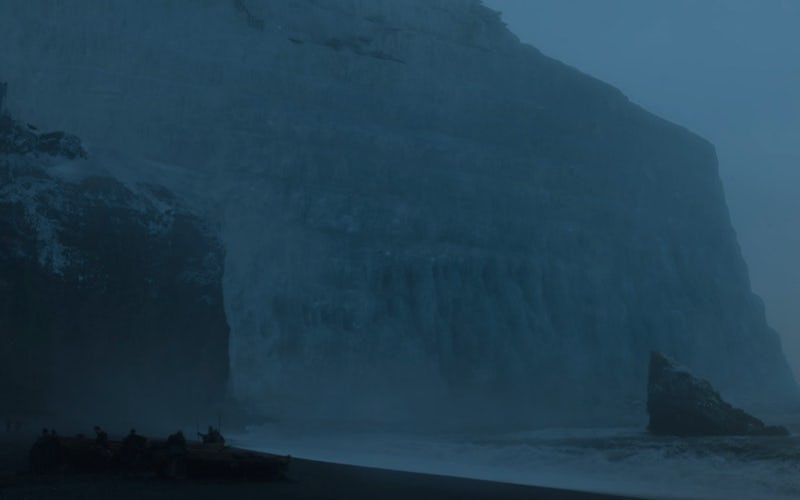 There are many tours that allow you see the black beach, including this  ATV tour and the South Coast Tour. 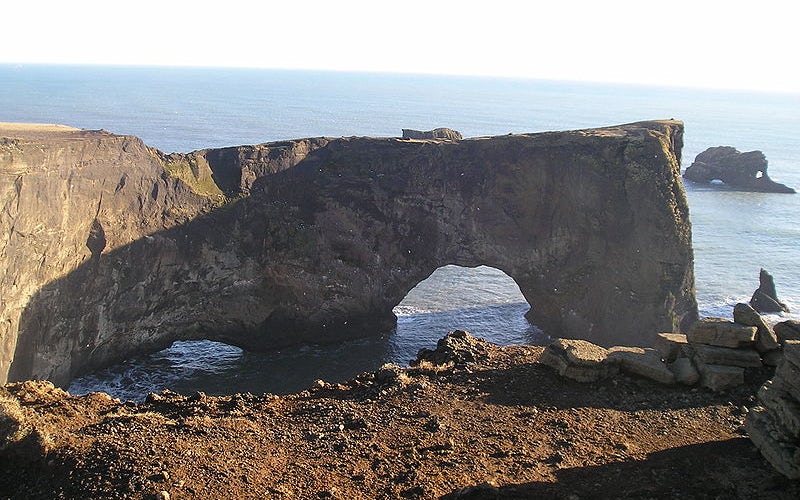 Dyrhólaey is a tiny peninsula, formerly an island, famous for its staggering views of Iceland´s south coast and wealth of birdlife.

This "island" can be seen in the episodes that show Eastwatch by the sea in season 7. 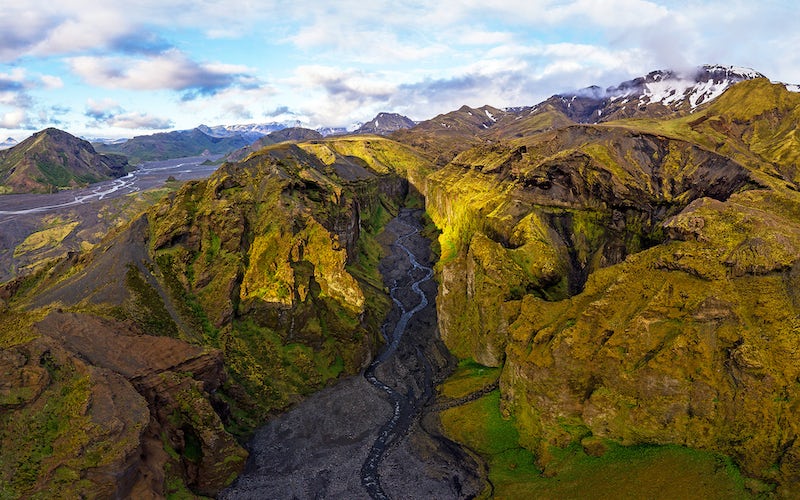 Stakkholtsgjá is a canyon located close to the entrance to Þórsmörk. It has a narrow riverbed and ends in a beautiful waterfall. The canyon is up to 330 ft (100 meters) deep and 1.2 mi (2 kilometers) long.

In season 7 when Jon leads the team to abush a group of wights, this towering moss-coverd canyon near Þórsmörk is used for that sequence. Because of the formation of the canyon, it´s deathly quiet and very calm. 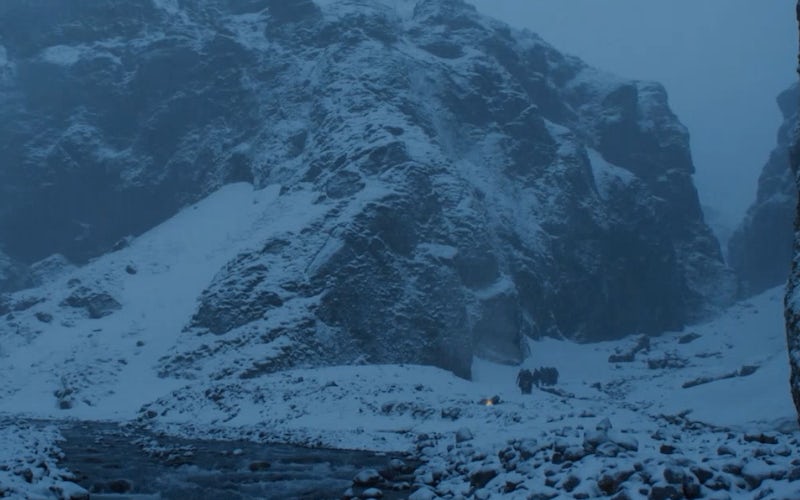 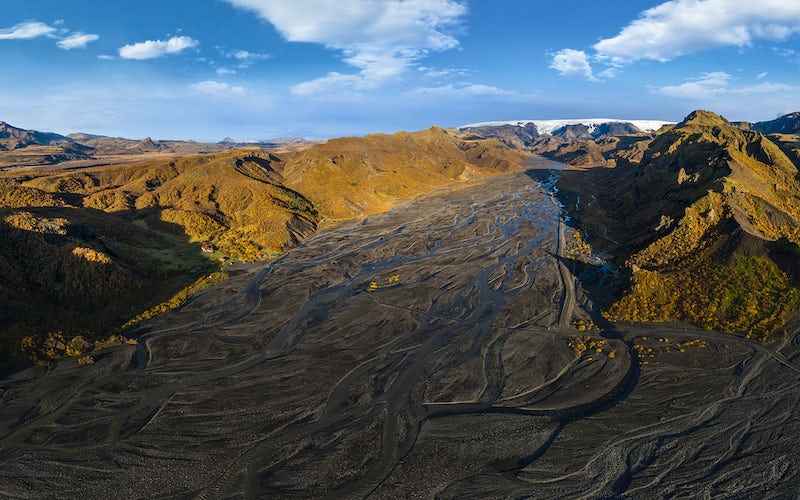 Þórsmörk is a very popular place for traveleres to go camp and hike through the mountains and a favourite location of photographers. Þórsmörk (Valley of Thor) is a valley and a mountain range between the glaciers Eyjafallajökull (yes, that is the famous volcano), Mýrdalsjökull and Tindfjallajökull.

The scene where Jon and his team are trekking across the lands beyond the wall is filmed in Þórsmörk. Below, you can see a part of the water-carved landscape they traverse at a less snowy time of the year. 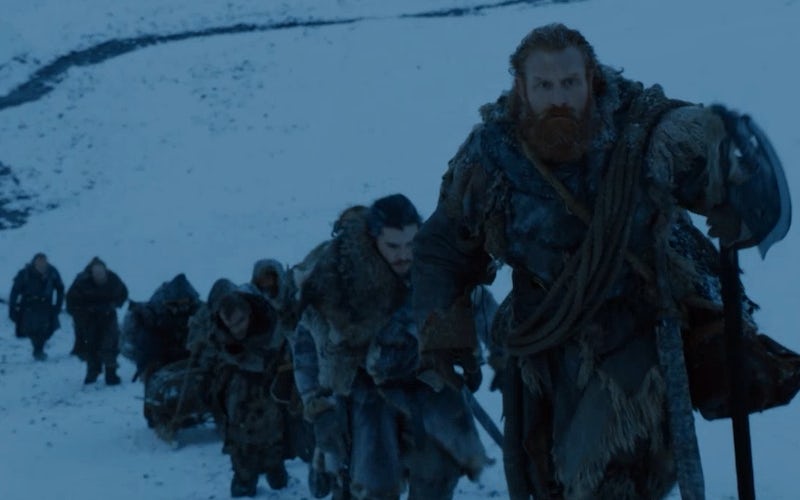 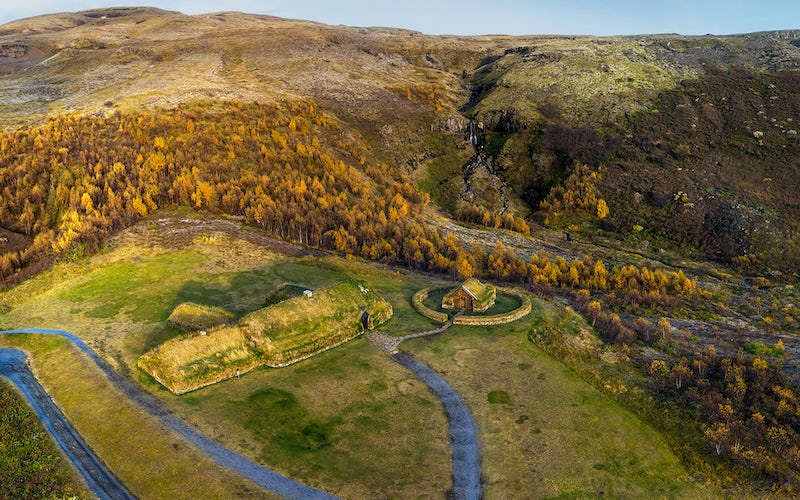 This farm is a reconstruction based on the excavated farmhouse Stöng from the Commonwealth Era in Iceland. This allows visitors to study the buildings of our ancestors and learn about the background and daily life. It is believed that the farm was destroyed when Hekla erupted in the year 1104.

This is the farm in which all the inhabitants were killed by wildlings when they climbed the wall. The only survivor is a small boy that rode to Castle Black. 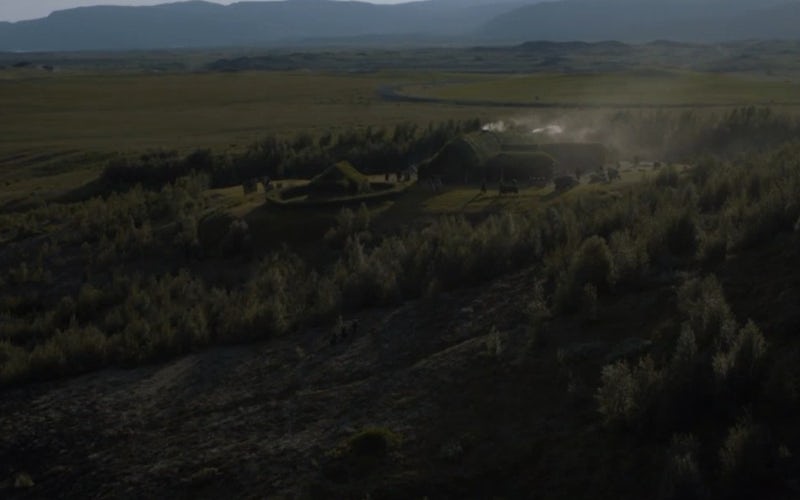 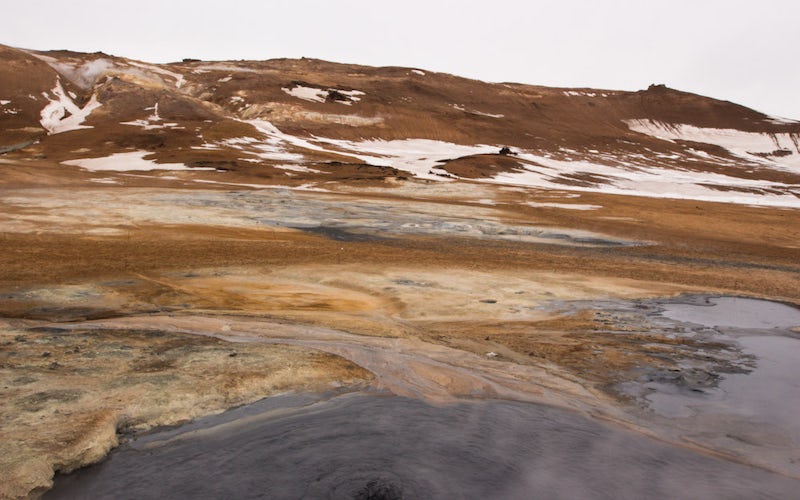 Hverir is a unique waste land with pools of boiling mud, hissing chimneys and hot springs.

In the beginning of season 3, we see Sam wandering through an impenetrable blizzard. This is an illusion created on the bubbling mud flats of Hverir: The blizzard is actually a thick mist emerging from geothermal vents. 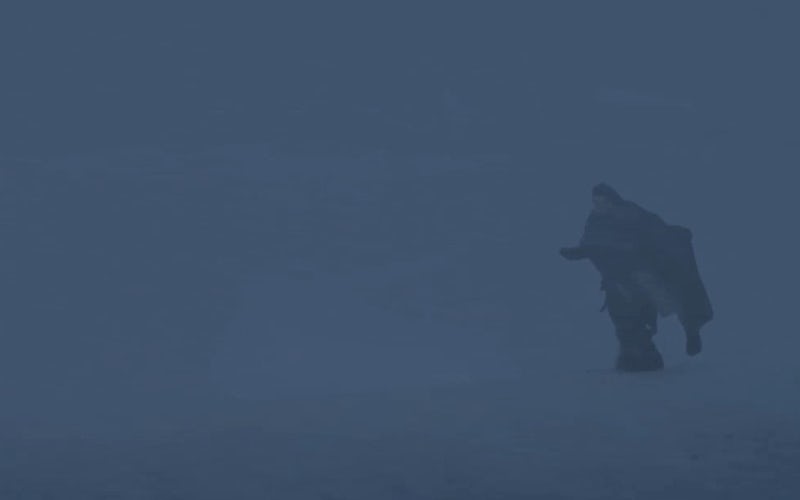 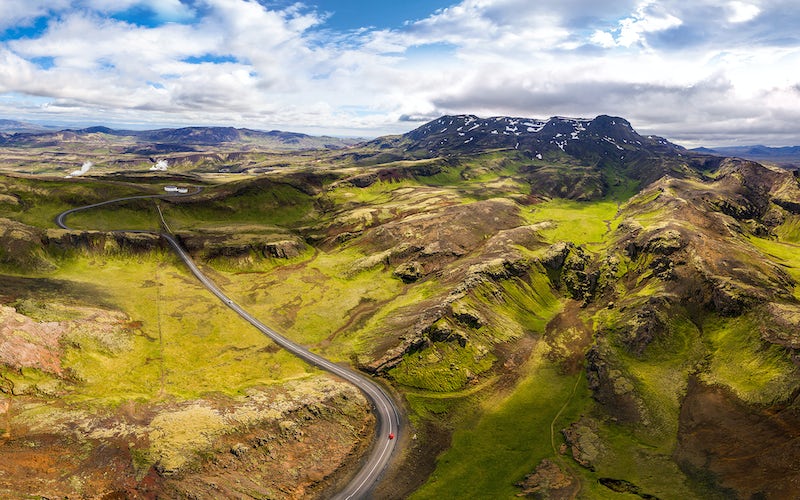 Nesjavellir is a geothermal area in Southwest Iceland where you can find the second largest geothermal power station. This site is located a short drive from Thingvellir National Park. 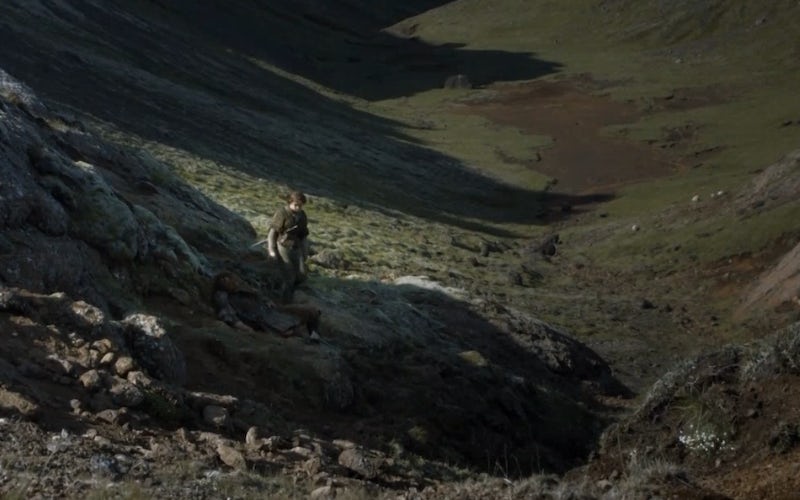 Special thanks to Snorri Þór Tryggvason. 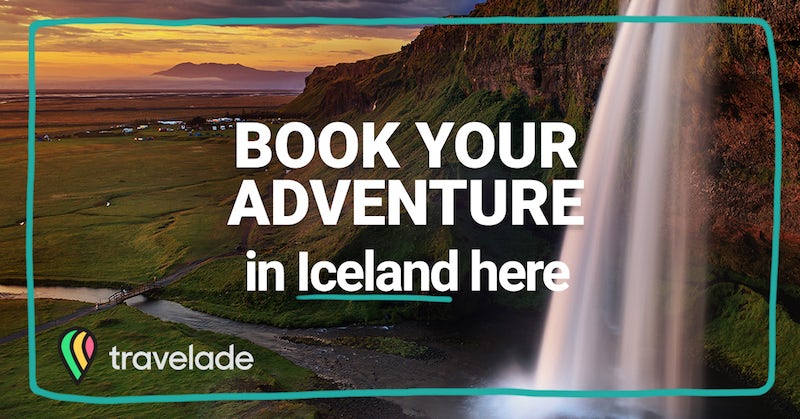 Into the Glacier Classic Tour | Meet on Location
Experience·$149