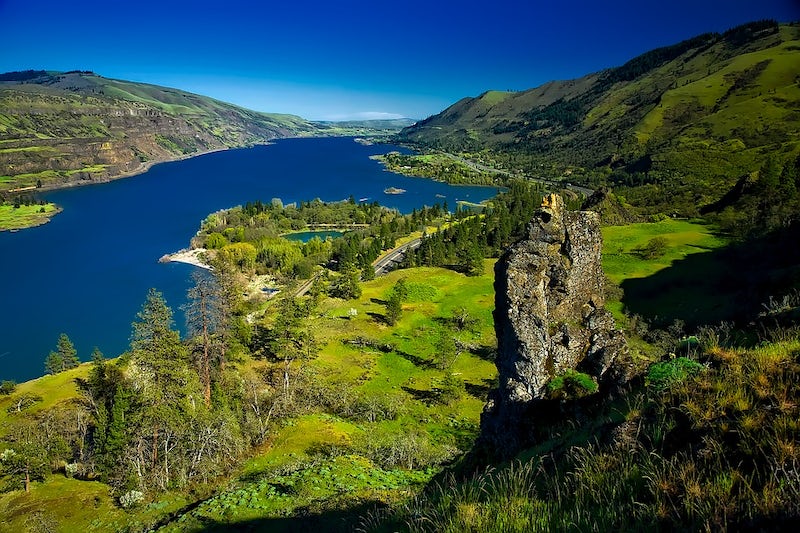 Visit the top outdoor attractions near Portland, Oregon on this guided, half-day tour. Spend the morning taking in amazing views of Multnomah Falls and other Columbia River Gorge Waterfalls.

Visit the beautiful Columbia River Gorge! Your adventure will take place along the Historic Columbia River National Scenic Byway, where some of the locations we may stop include: Portland Women’s Forum, Crown Point Vista House, Latourell Falls, Multnomah Falls, and Shepperd’s Dell.

You tour will start with the view from Portland Women's Forum. This location is absolutely breathtaking and it's one of the best spots to soak in a view of one of the most beautiful places on earth: the magnificent, awesome Columbia River Gorge.

Our next stop is Latourell Falls. This waterfall plunges 249' over a massive wall of columnar basalt, some of the best formations in the Pacific Northwest, before cascading hastily toward the Columbia River. This waterfall is usually most recognized for the large patch of bright yellow lichen adorning the cliff face to the right of the falls, and this characteristic has led many famous photographers to this captivating location.

Other waterfalls we may stop at while driving on the Historic Columbia River Highway include:
Sheppherd's Dell- In 1915, a local dairy farmer named George Shepperd gave all that he had (this tract of land) to the City of Portland as a memorial to his wife. The upper fall is around 42' tall. The lower tier is around 50' tall.
Bridal Veil Falls- Beautiful Bridal Veil Falls is an elegant and graceful lady that can be fully appreciated from the deck of a viewing platform rebuilt in 1996. The creek hustles down from the top of nearby Larch Mountain, tumbles over the cliff and eventually flows into the mighty Columbia River.

Next we will drive to Multnomah Falls. According to Native American lore, Multnomah Falls was created to win the heart of a young princess who wanted a hidden place to bathe. Multnomah Falls is the most visited natural recreation site in the Pacific Northwest with more than 2 million stopping by each year to take in the views! Fed by underground springs from Larch Mountain, the flow over the falls varies, but is usually highest during winter and spring. This is also one of the best places in the Columbia River Gorge National Scenic Area to study geology exposed by floods.

Return to Portland and drop off at downtown Portland hotels.