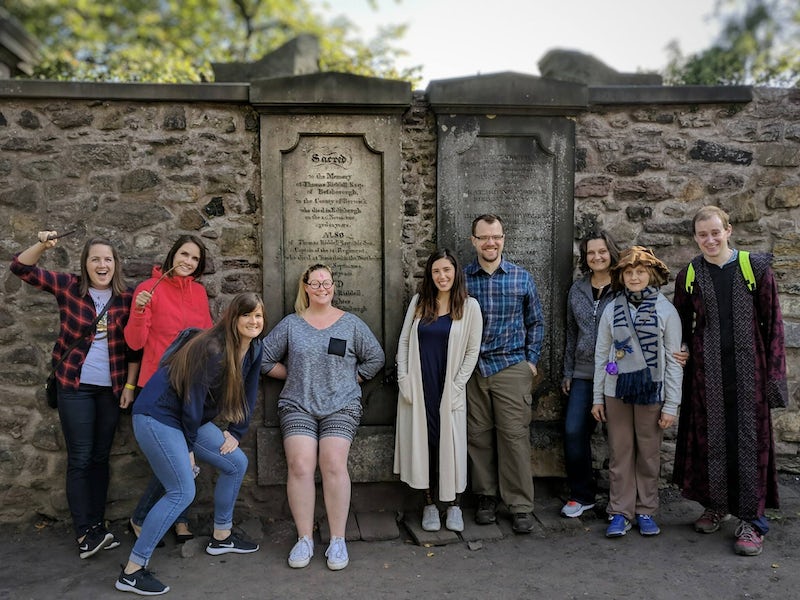 Immerse yourself in the life of JK Rowling and relieve the inspirational spots behind the Harry Potter series. Treat your tastebuds to a sample of chocolate frogs or Scottish ice cream as you walk around Edinburgh.

JK Rowling is a moderately influential woman who's sold a few books. On this tour we dive deep into her history. Learn to use failure as a springboard, be inspired, stay committed and conquer the world. Discover the sights that inspired her and the cafes which fueled her. Experience how, through her adopted daughter, Edina (Edinburgh) once more left footprints upon the world.

1. The Balmoral Hotel: The tour begins with a sorting

Opposite the Balmoral Hotel, where Rowling finished writing Harry Potter and the Deathly Hallows, the tour begins.

I acquired a magic hat from a witch and we separate people into houses. Pottermore sorted me into the Snaky house, so when they win the house contest I'm especially pleased.

2. The Royal mile, melting pot of old Edinburgh & Rowling citizen of the world

This tour is thorough, so we'll discuss how the original idea hit Rowling - traveling from Manchester. We'll discuss what Rowling developed about the world living in Manchester.

We'll trace how Rowling's Portuguese romance and the implosion of her first marriage impacted the saga.

We'll cover Rowling's studies, how these prepared her to map out a whole new fantastical world.

Rowling is Britain's primary role model, so we'll chat a bit about her charity work, how this impacts the world and Harry's too.

5. Potterrow - did it gift the name of Britain 's most famous fictional hero?

We'll discuss the mythology behind this street.

7. INSIDE: Museum of Scotland for a film prop and inspirations

Why is Ron Weasley better than Hermoine Granger at wizard chess? We find out here.

Death is a major theme in the Harry Potter books. We'll study the Millenium clock, commemorating human suffering in the 21st century, and discuss thematic connections to Harry Potter.

In Rowling's daughter's favorite part of the museum, we'll chat about Scottish mythology around unicorns and connections to the Philosopher's Stone.

Sometimes, depending upon familiarity we'll debate things like - 'Who is a more loyal friend to Harry - Hermoine or Ron?

8. Greyfriars Kirkyard & how it helped create the Wizarding World

Pushing baby Jessica around trying to get her to sleep Rowling wandered into this cemetery dating from Mary Queen of Scots - 1560, she was inspired.

9. 'Hogwarts', the finest school of witchcraft and wizardry in the world

We'll have a look at George Heriot's school, chat about its similarities with Hogwarts and what Rowling's first child Jessica got up to as a pupil here.

10. The grave of Tom Riddle also known as Voldemort

The tour is really about what you can learn from how Rowling overcame hardship and accomplishes so much, but I have done a Horcrux sacrificial ritual with 23 Aussie Scouts here, the authorities became cranky - 'oh great, now we've got Satanic rituals in the Kirkyard', so we don't do this often.

11. The Elephant House - the most famous 'Harry Potter cafe'

Second novels are often claimed to be the hardest, this is where Harry learned to walk then run.

The cafe has one of the best views of medieval Edinburgh.

We'll discuss how this helped write the Chamber of Secrets and beyond.

12. TRY: Scottish Whisky ice cream, at present, they even have Butter-brew flavored (not always open)

We chat about how the street was in the 90s

If people are interested, this is Potter central, I'll chat about some of our Diagon Alley style Potter shops.

There will be books written about Harry, every child in our world will know his name.

Little did Rowling know it would come true.

This is the most romantic sight in Edinburgh so we chat about Harry Potter and love.

The story of how the books became a publishing sensation, tracing it from Britain to America to gripping - and paving - the planet. Lifting Rowling from poverty and rocking her world.

At the end of the saga, having taught a generation of kids to read across the globe, the honors began rolling in.

We'll celebrate her and give thanks to her.

The house cup will be awarded and chocolate frogs shall be served (do not tell children in case of Frog failure).

Is this experience for me