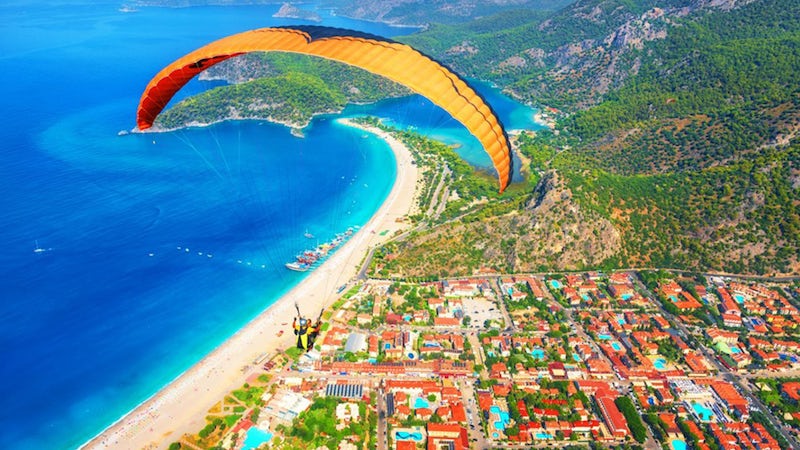 Want to experience the freedom of an eagle flying high? Want to overlook the deep blue in the silent sky? Want to feel the excitement of aerobatics? Then you must go to Fethiye to experience a paragliding! Under the guidance of the pilot, soaring between the canyons above the sea of clouds, you can have a panoramic view of the sea and the sky, overlooking the breathtaking panoramic view of the Dead Sea at your feet, and feel this dreamlike romantic feelings~

Tomb of Amynthas, son of Hermapias , There are many rock tombs carved on steep rocky slopes, three of which are of the temple type and others are civil architecture examples.. It is the rock version of the facade of a temple, named the Tomb of Amynthas due to the inscription “Amynthas, son of Hermapias” in the middle part of the eastern anta wall, dating to the 4th century BC, and having an in antis plan (temple type with two columns between antae). Amynthas Rock Tomb, which is the symbol of the city, and other tombs on the same steep slope to the east are the best examples of the metal and wood workmanship of the Lycian Region.

With our one day trip ,you can enjoy the most important places of Fethiye ,and make your trip more unforgettable.