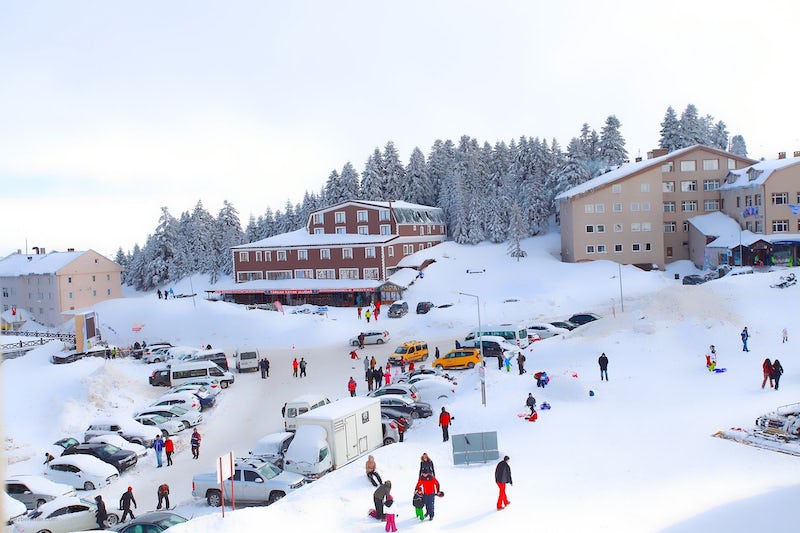 Bursa is a city in northwestern Turkey and the capital of Bursa Province. It is located at the northern foot of Ulu Mountain; it was a military important place under the rule of the Byzantine Empire; in the 14th century, it was the religious and cultural center at that time; in the 17th century It is one of the three capitals of the Ottoman Empire and the second largest city after Istanbul; Bursa is famous for its ski resorts, the tombs of the Ottoman Sultans and the fertile plains, and it is also the birthplace of many famous Turkish foods.

Do you like season-changing travel? The transition from sunny weather to flaky land always excites me. Especially if I see the snowfall first. As you know, the number of snowy days in the world does not exceed the finger of a hand. We find the solution to go to ski resorts to satisfy our longing for snow. Uludag, Turkey's largest ski resort is also one of the most preferred ones. Uludağ, the apple of the eye of Bursa, is actually a huge 27,300-hectare National Park. Uludağ, which was declared a National Park under protection in 1961, is a natural wonder that can be visited in four seasons, although it is popular in winter. Uludağ, which is extremely suitable for trekking as well as camping, especially in the spring and summer months, offers a distinct beauty to its visitors in every season.

In Uludağ Ski Center, the lowest point is 1750 meters and the highest part is 2435 meters, the peak point is 2543 meters. The highest point of the area where the Hotels Zone is located is an average of 2000 meters. There are 24 tracks in total in Uludağ Ski Center. In Bursa Uludağ Ski Center, skiing can be done in all parts of the very wide and suitable land, together with the ski runs in many styles such as snowboard, alpine style, heliskiing and cross country. Of the 24 lifts in the ski center, 14 are chair lifts and 10 are teleski. There are also 7 t-bars, 24-hour emergency aid center and a mobile clinic. The largest runway is 2450 meters, and the longest chairlift is 1.980 meters. The total length of the tracks in the Uludağ Hotels Area is said to be around 60 km on average.

By joining our Ski tour ,you will make your trip more exciting and unforgettable.