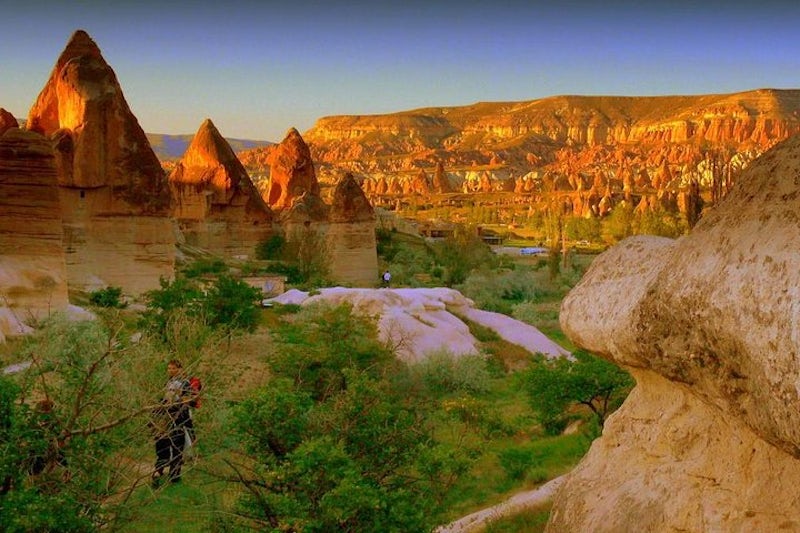 This is a customized full-day small-group tour with an expert local guide to the underground cities of Cappadocia. Skip-the-line tickets, lunch and transportation provided

According to your tour pick-up time meet with your guide and start your full- day tour. Visit Rose and Red Valley ; is an incredibly unique area of Cappadocia with sharp ridges, tinted in pink especially during sunset! the minerals in the sandstone have a pink tinge. This pink becomes more and more evident throughout the day, peaking at sunset when the sun glows directly onto the Rose Valley giving it that fine shade of pink so many people come to see. Next Cavusin ; is surrounded by a valley, which becomes gradually wider, called as Red Valley. The houses of the village were cut into massive rock formations. The village is famous for its rock-churches. Next; Pigeon Valley ; earned its name from the countless man-made dovecotes (Pigeon Houses) that have been carved into the soft volcanic tuff. Pigeon Valley is one of the best spots for walking in the marvelous Cappadocia region.

Next; Underground Cities ; once a place of refuge for 15000 Christians. These settlements were of enormous value to the development of Christianity as they provided shelter and worship and were in use until the end of 7C AD. Witness the ancient bedrooms, church, meeting hall, and food storage rooms in this eight-story city connected by 30km of corridors and passageways. Tour continues with Ortahisar ; famous for its friendly inhabitants, picturesque stone houses, narrow streets and lovely churches as well as the castle-like rock formation after which the town is named. At the end of the tour drives you back to your hotel.

Take passport for children if any