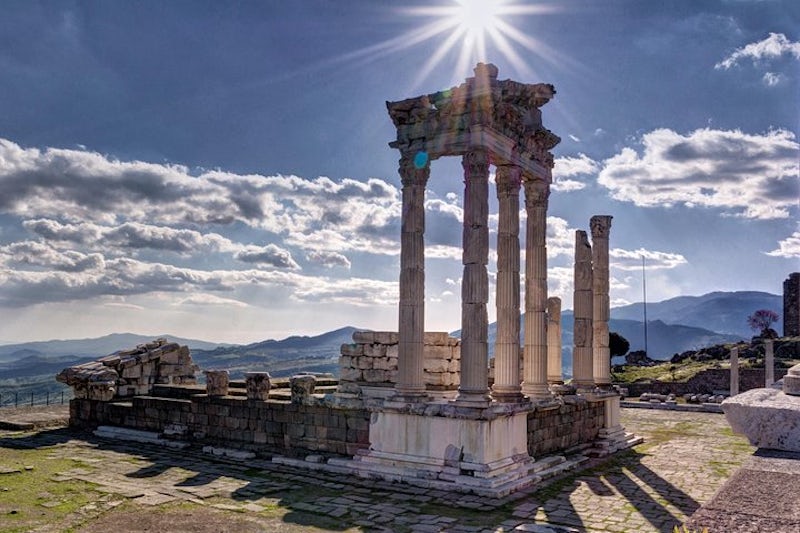 Visit Pergamum&Asklepion with local tour guide in a luxury vehicle from/to Kusadasi amd Izmir. This is a private tour and flexible. Its always up to you to modify your itinerary according to your travel preferences even during the tour.

According to your private tour pick up time, meet with your guide and start your full-day tour. The first visiting place is Pergamum ; When John wrote his Letter, Pergamum had been a capital city for almost four hundred years. After the mythical times, Pergamum Had been the scene of several cultures, ranging from those of the Stone and Bronze Ages until the Archaic and Classical Periods. Among the temples, palaces and agora’s, the Asclepion, which were constructed in the course of one century, belonged the big Zeus Altar and the Parchment Library There you explore the impressive Acropolis, the actual ancient city and see the Altar of Zeus which is mentioned as the throne of Satan’, Temple of Trajan and the thirds biggest Library of antiquity. Next; Asklepion ; was known under the name of "The Pergamum God of Health". Asclepius the deity of health and medicine served the people For several hundred years; thus making Pergamum a medical center of very great importance. Famous medical Scholars, like Hippocrates and Galenus, were born in Pergamum and worked there.

Lunch in the local restaurant

All sightseeing mentioned in the itinerary

Take passport for children if any

There will be roughly 2mile walking during the tour.