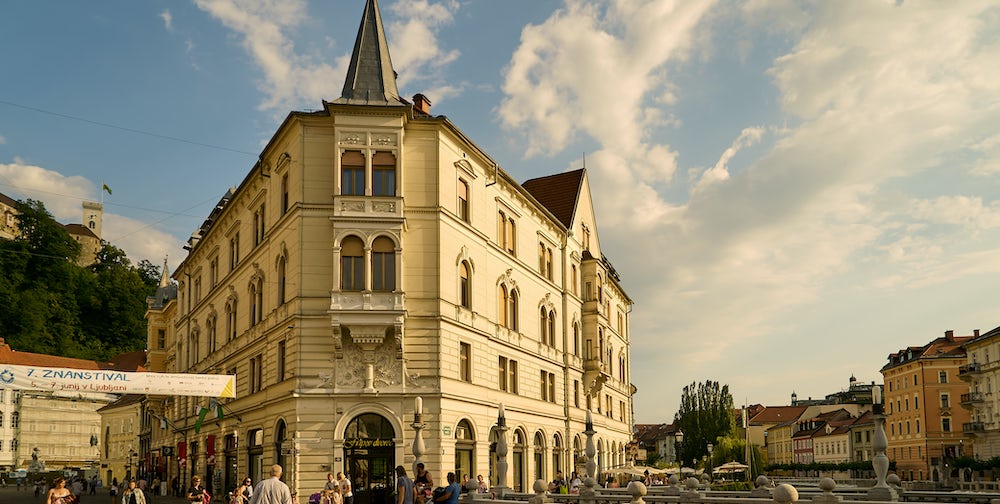 What to Do in Ljubljana, the Capital of Slovenia

Ljubljana has endless things to offer, whatever the season. Check out this city guide if you are planning on visiting the charming capital of Slovenia.

Two thousand years ago, a Roman city called Emona was placed on the site of the present-day Ljubljana. Today, the capital of Slovenia, is a charming Central European city with a population of 300,000. Ljubljana itself means “beloved”, and is famous for its architecture and atmosphere that is both Central European and Mediterranean.

What to do and where to go

With the castle raising up in the middle of the old town, surrounded by the river Ljubljanica, this picturesque town offers numerous possibilities of spending the time. By just walking around, crossing the river and admiring more than 10 bridges, the city streets, colourful houses and parks, it’s inspiring knowing that the famous slovene architect Jože Plečnik, created one of the 20th century’s magnificent total works of art, the so-called Plečnik’s Ljubljana. 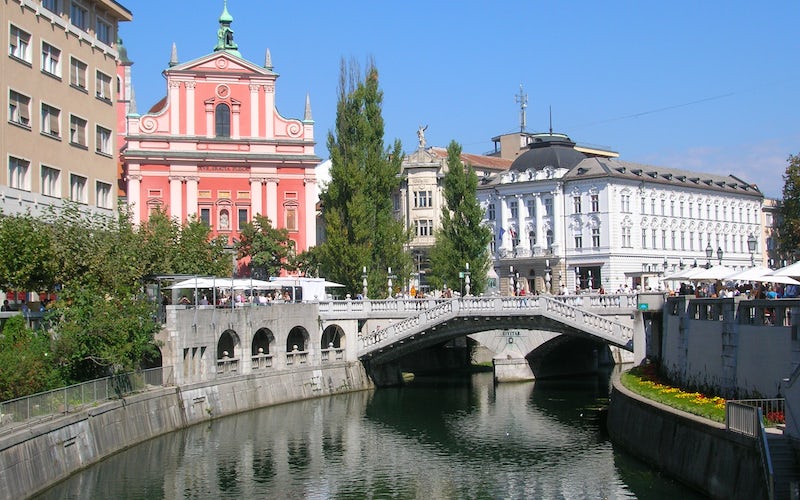 The area can nicely be experienced on a tourist boat cruise. You can enjoy sightseeing of the urban part of the city as well as the wild area of the basin of Ljubljanica. More than 200 years ago Gabriel Gruber, the engineer and architect, designed a river crossing in order to save the city from flooding and enable the drainage of the Ljubljana marshes. With so-called Gruber’s canal he actually made a Ljubljana’s old town an island. 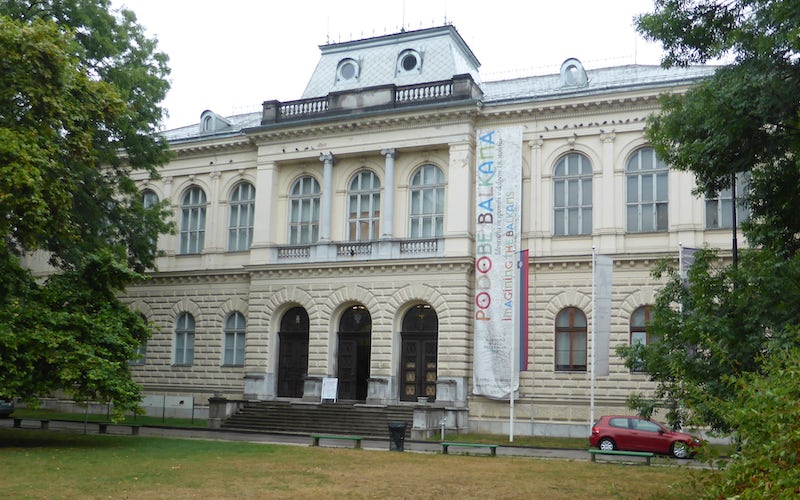 Ljubljana has everything the big cities have got to offer, but on a smaller scale. Its smallness is its big advantage and everybody feels safe and comfortable here. People like to hang around, have a drink in the bars along the riverbanks, visit museums and galleries, libraries or theaters or sit under the tree in the Tivoli park, the biggest and the most beautiful park in Ljubljana. In the instant vicinity, under the hill Rožnik, there is the Ljubljana zoo, mostly attracted to kids but also to all animal lovers. 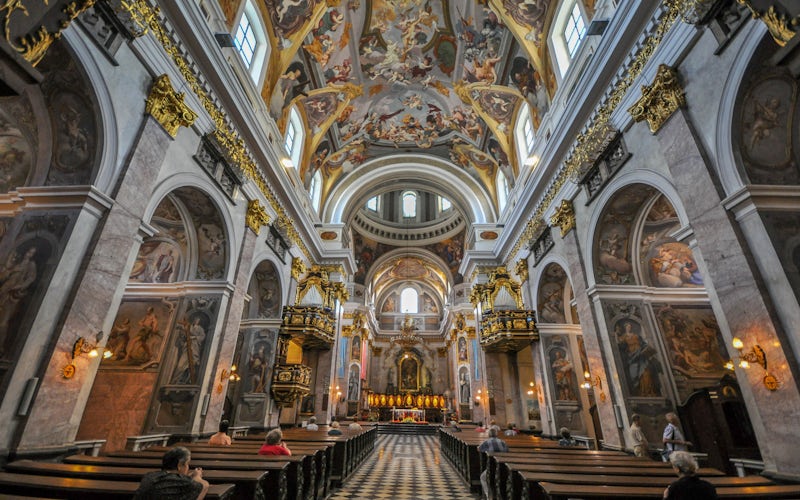 The interior of the Church of St. Nicolas. Flickr/Jorge Láscar.

One of the main spots on the right side of the Ljubljanica river is the central market, where you can buy fresh fruit and vegetable, meat and dairy produces from the local farmers. On Saturday mornings, you’ll find parades of ljubljaniens and visitors as well. If you go a little further towards the Town hall, there is a Ljubljana’s Cathedral - Church of St. Nicolas. With its green dome and twin towers it’s an easy recognizable building. Even though it is magnificent from outside the interior is breathtaking in any way. 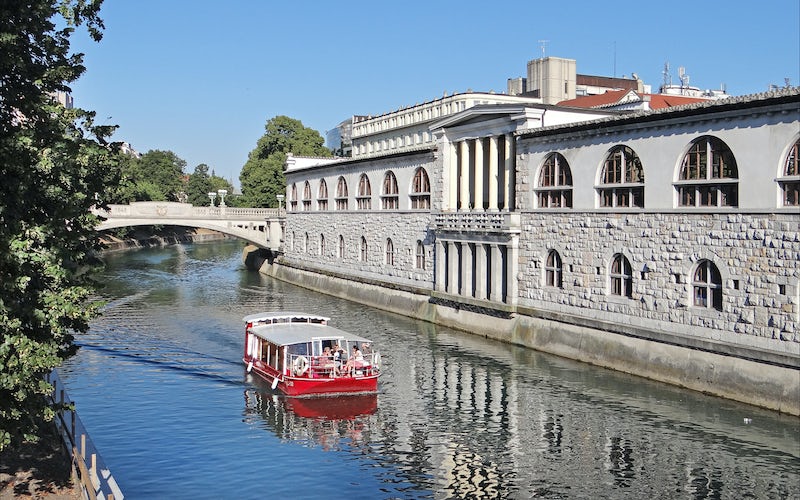 The central market at the Ljubljanica river bank. Flickr/Jean-Pierre Dalbéra. 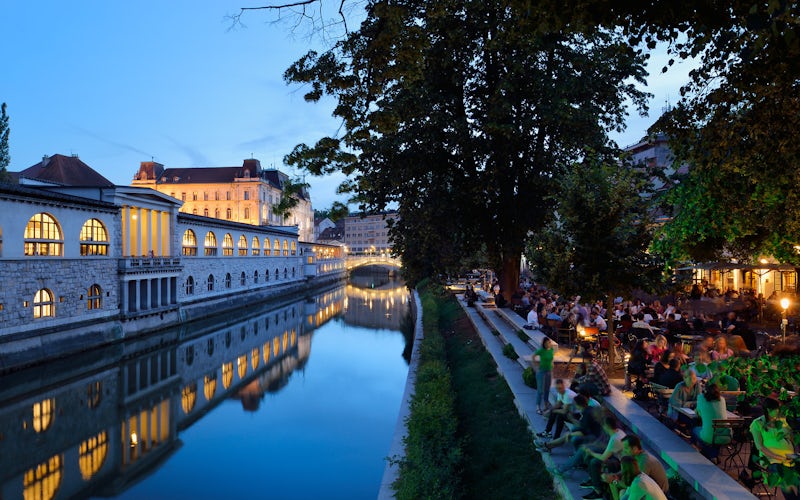 After crossing the Triple bridges, you’ll find yourself in the middle of Prešeren square, named after the Slovene poet, France Prešeren. In November 1844 he wrote a song “Zdravljica” and the seventh poem of the song became the national anthem in 1991, as Slovenia became an independent nation. 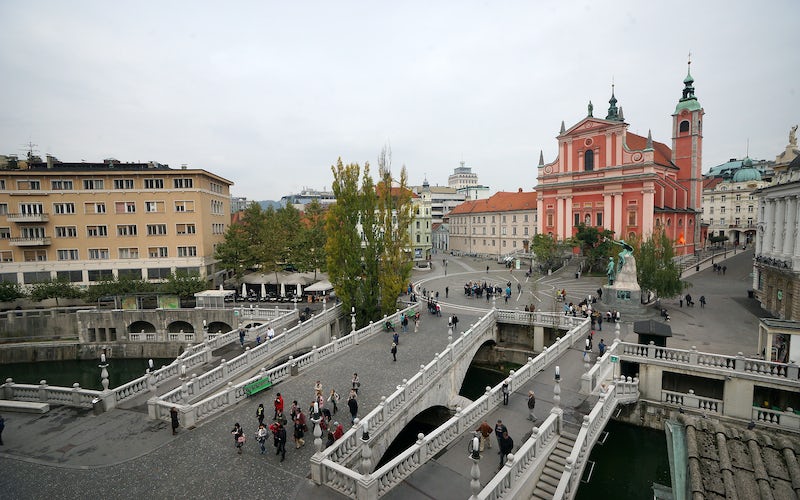 Ljubljana's main attraction is the castle that has been standing on the hill above the old city center for more than 900 years. From its tower you can admire one of the most beautiful views of the city. Ljubljana’s castle can be easily reached by a funicular railway. There is of course also a road and many narrow and relatively steep walking paths which will lead you to the top of the hill. Visiting the castle’s museum exhibition on Slovenian history, a puppet museum, and a number of historical rooms, is simply a must see. You can easily spend the whole day in the old fortress since there are two famous restaurants, Strelec and Restaurant Na gradu, a café and a night club. 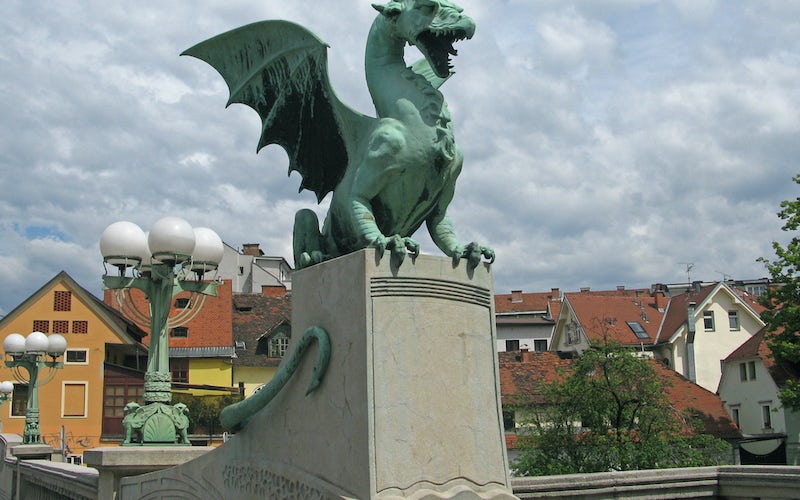 The symbol of Ljubljana is the dragon which dominates the iconic Dragon Bridge. The dragon’s image is also represent on the town’s coat of arms, flag, river walls and even on the crest of the local soccer team. Have you heard the story about Ljubljana dragon? The origins can be traced to the legend of Jason and the Argonauts. Jason was a Greek hero who stole the Golden Fleece from the king of the Black Sea and to act even more heroic he also stolen the king’s beautiful daughter, Medea. They fell in love and together they defeated the beast.

You will love the Ljubljana old town since everything is in the walking distance, beautiful and full of life.

Alternative things to try in Ljubljana

Summer, which is high season, attracts travelers who like the concerts, movies and other events that take place under the stars. Ljubljana is a real treat for artists and Metelkova mesto is the right place for all art lovers. An alternative culture centre has developed from a squat in former army barracks and that has become one of the best known attractions of Ljubljana. Nearby there is the hostel Celica in ex-prison, opened all year long. What would you say about spending the night behind bars and eating tasty food and drinking cool drinks? 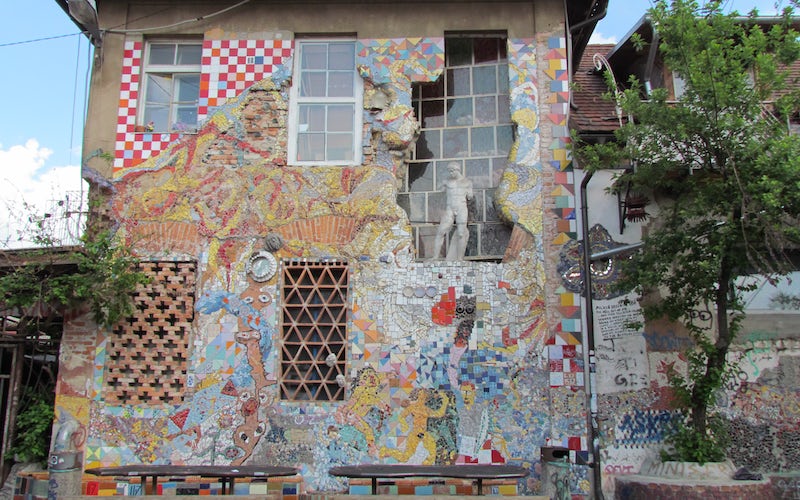 Or perhaps you want to experience the House of experiments, a scientific museum where adults and children will find full of excitement?

The center of Ljubljana is closed for traffic and people easily walk around. For the last four years a bike rental system called Bicikelj is becoming more and more popular. It is easy to rent one, also for tourists, at several spots around the city. All you need is a code, which is possible to buy online.

For going back to the past and see the remnants of Emona, visit the iEmona information point, located in the Chopin underpass in the Kongresni trg square or visit the City Museum of Ljubljana.

Where to get good food, drinks and coffee

If you are still full of energy after a long day, you’re in for a treat since  Slovenes are really amazing when comes to dining, drinking coffee and partying. At the Pogačar square the biggest food festival in Ljubljana, the Open kitchen is going on. It is a well known food market where you can experience the delights of freshly cooked food prepared by different Slovenian chefs right there in front of your eyes. It is an unforgettable opportunity to meet Slovenian chefs, taste Slovenian and international dishes and learn about varieties of food preparation. The cooking is done every Friday during the summer to the accompaniment of music and entertainment.

And there is more to see, taste and feel in Ljubljana. The Beer & burger festival takes place in the end of September at the Pogačar square as well. For one day Ljubljana turns to the vivid place, full of new beer and burger trends lovers. Numerous microbreweries from different parts of Slovenia offer beer delights in one place. And of course burger chefs are there make it easier for you to drink and enjoy even more. But don’t forget drinking fresh water while eating and drinking alcohol. In Slovenia there is a habit of having one glass of water every time you finish the glass of wine or beer. 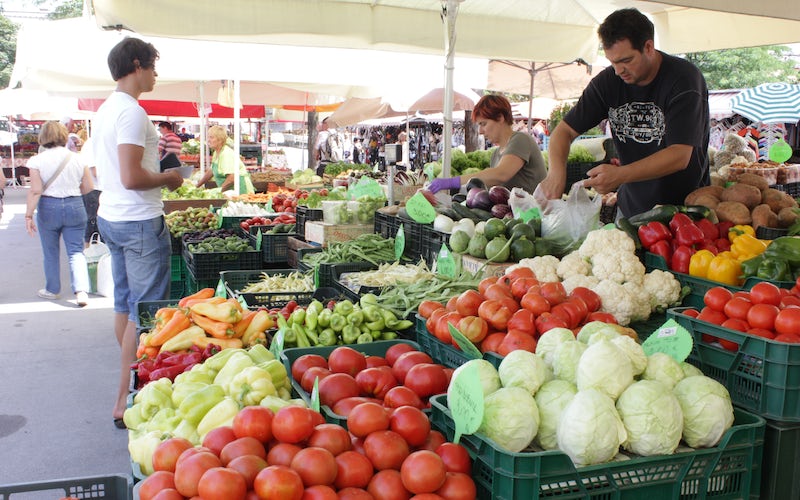 Ljubljana is famous by all kinds of restaurants, from fancy and expensive ones to simple and more affordable. But everywhere the food is tasty, fresh and prepared mostly using the local ingredients. You can choose between vegan, vegetarian, Slovenian traditional food or Balkan, Mexican, Spanish, Indian, Greek and delicacies from the other parts of the world. 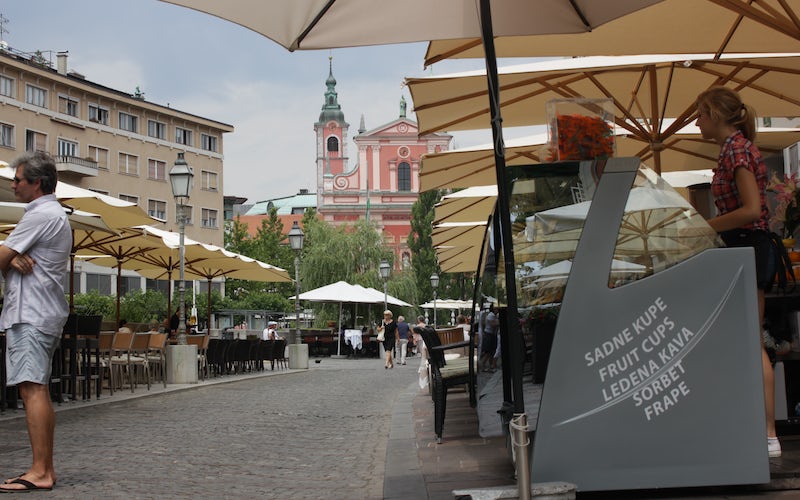 You wouldn’t believe how many bars and coffee shops with excellent coffee are there in Ljubljana: Kavarna natura, Tozd, Cafe Čokl, Cacao, Cafetino, Črno zrno, Stow and many more. But how to choose the right one for yourself? Just follow your nose and feel the scent. There is always the right moment for the coffee. As an old Arabic saying goes: The first cup is for the guest, the second for enjoyment, the third for the sword and we really don’t have anything to add. Our advice: take your time and enjoy, wherever you are.