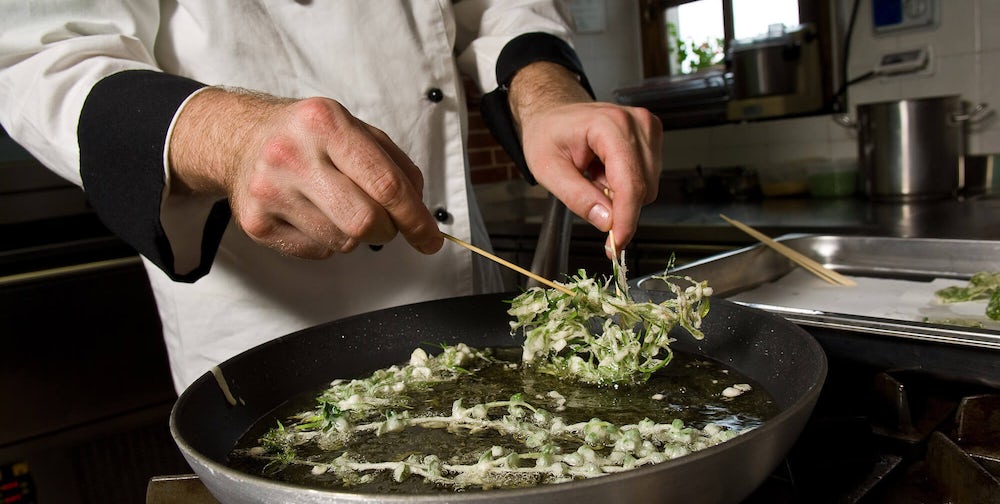 Consciousness of Slovenia's exquisite gastronomy is beginning to percolate beyond the world's Michelin restaurants and into the public realm. I put Slovenia to the taste test and here's what I found (in short: Foodies, you're in for a treat!)

Barely 25 years old, Slovenia's freshness is reflected in its food. This gastronomic New World has been attracting global attention its novel offerings. The first foodies in the know gloat justifiably over their plates of unctuous Jota.

Located between several famous culinary meccas, lesser known foodie feast Slovenia serves up a plenitude of special flavors for foodies to salivate over. If your tastebuds are the prime movers when it comes to deciding where to travel, you should consider Slovenia. Touring the country, you can skip from one taste sensation to the next, burning off just enough calories to justify temptation by Slovenia's newest serving of culinary joy. Here's what I discovered when I put Slovenia to the taste test.

With influences of Italian, Austrian, Hungarian, Croatian, and Russian cuisine, the palate of flavors proffered by this slice of former Yugoslavia is rich. Additional regional diversity further nuances its dishes. There are 24 regions in Slovenia, each with its own culinary personality.

Geography plays a role too. A small but varied terrain that stretches from the Pannonian Plain to Karst and the Adriatic in the south, local products reflect the gamut of Slovenian landscapes. Put all this together, and you have a burgeoning, yet still largely uncharted, foodie paradise. 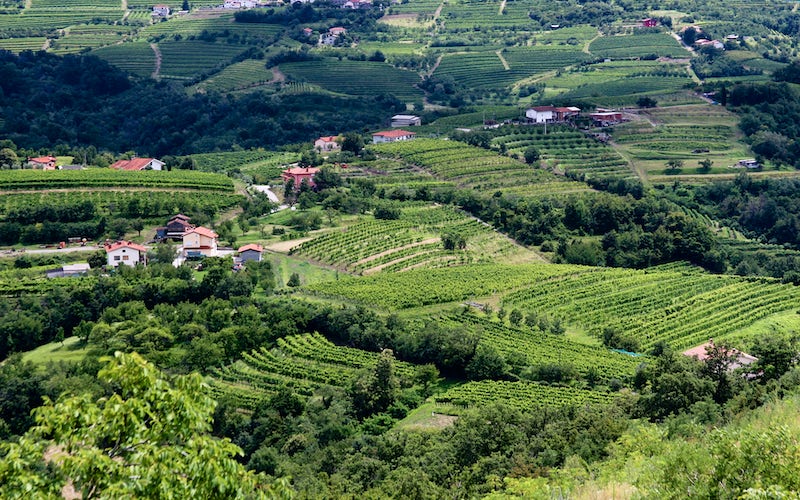 Slovenia's wine-producing regions are also gradually being recognized by the wider scene. From sampling the delights of the Karst region on its wine trail to tasting hoppy craft brews on beer tours of the capital, visitors can drink deep to Slovenia's culinary wealth.

The culinary adventure begins in Slovenia's capital, Ljubljana. Gaining an overview of the country's cuisine, at the popular Odprto Kuhna (Open Kitchen) is top of my list of things to do. This outdoor market fills the pretty Pogacarjev trg with hungry patrons every Friday. Vendors range from local start-up establishments to major market players like Strelec and Gostina AS. You can sample the very best Slovenian cuisine at equally palatable prices. Plus, a bastion of wine and beer stalls are sure to go down well. 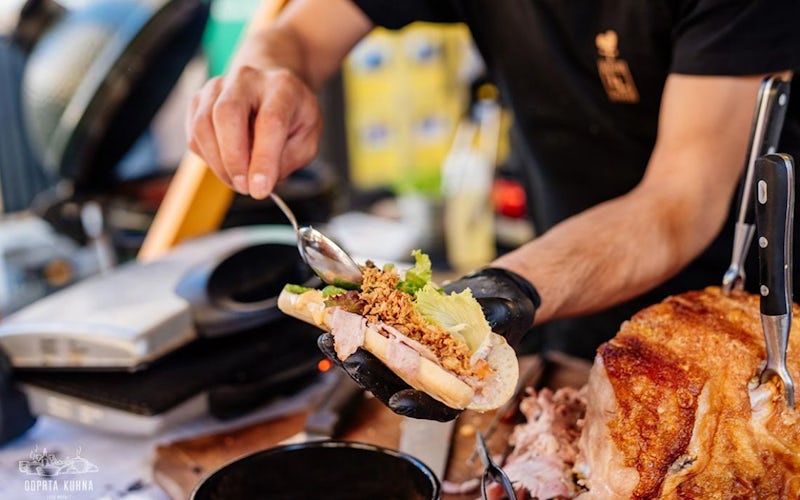 If liquid lunches are your thing, round off your day at Dvorni Bar, which stocks some of the best Slovenian wines, including Rebula from Goriska Brda and rust-colored Teran from Karst. Union Pivnica serves Slovenian beer in the former brewery canteen. Craft breweries Human Fish, Pelicon, Vizir, and Mali Grad are poured plentifully at Tozd, past which the Ljubljanica River flows.

Or you can join one of the famed Ljubljananjam beer walks. While it might seem strange to advertise water as a noteworthy gastronomic experience, Slovenia has some of the purest in the world. In the capital alone, I found some 20 exquisitely adorned water fountains. The crystalline liquid that spouts from them is free to drink, and the perfect antidote if you've enjoyed one too many craft beers. Also, try the Radenska Tri Srca and Donat MG for your daily dose of magnesium. 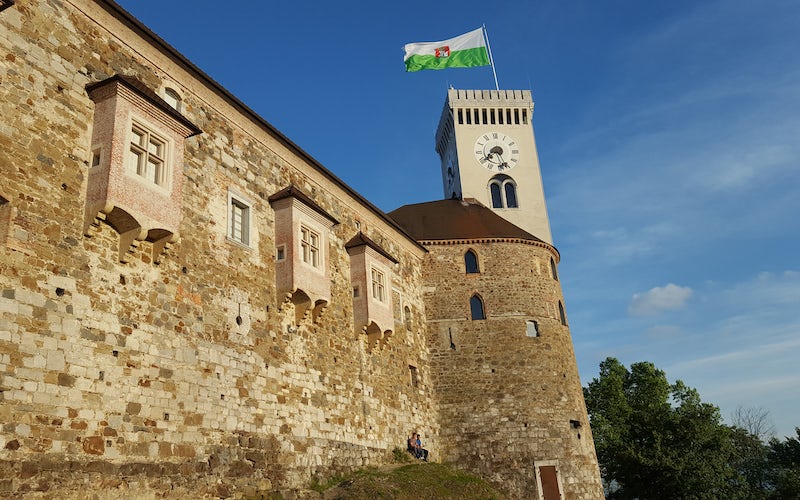 Dining in the Archer Tower at the Ljubljana Castle is an unforgettable experience. Flickr/LeDucky.

Spajza means 'pantry' in Slovene, and reimagines traditional Slovenian dishes. The Spajza restaurant is unquestionably one of the city's most exciting. Smoked buckwheat porridge comes with crackling. Deer tartare is garnished with raw quail eggs and wasabi foam. Horse meat is encased in black truffle.

For still loftier dining, ascend Ljubljana castle's Archer Tower to the aforementioned Strelec. Chef Igo Jagodic plies patrons with unconventional pairings like smoked eel with veal tongue and duck liver with fir tree foam. Views from the restaurant reach across the city, as far as the jagged Kamniske Alps. Lunch here is the perfect accompaniment to a lesson in Slovene history from the interactive exhibits at this 16th century buildng.

Slake your thirst in Slovenia's Savinja Valley and Goriska Brda 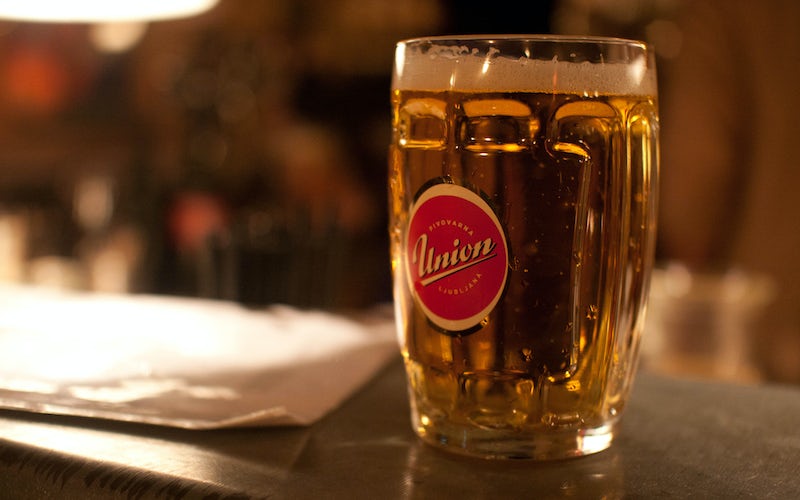 Eastern Slovenia's Savinja Valley is responsible for producing one of the country's major exports, hops. Naturally, the beers are heavenly. Lemongrass notes are discernible in brews by local producer Lasko's Zlatorog and Union pilsners. Meanwhile, oenophiles from as far off as New York and Tokyo have turned their attention to the local wines produced in this tiny European country. Michelin-starred restaurants are falling over themselves to integrate the unique notes in Slovenia's subtle and savory orange wines into their wine lists.

These tannin-weighted orange wines blush with grape skin induced pinkness. The entire country has been influenced by the innovative productions of culinary legend Ales Kristiancic, whose mission it is to create unconventional wines from local grapes. His Goriska Brda-based winery has garnered international acclaim for its saline, sage flavored wine, Puro.

Alchemy and anecdotes in the Julian Alps 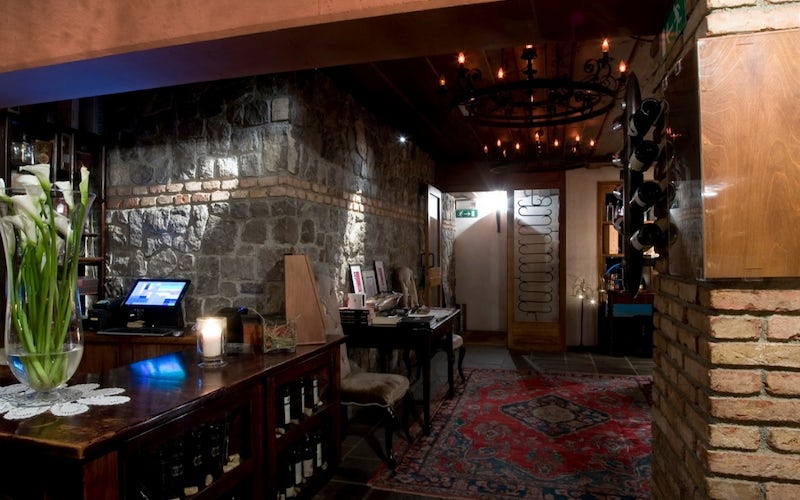 One of Slovenia's most distinctive culinary experiences is a meal at Pri Lojzetu. Located in the Julian Alps near the lush forests and plunging gorges of Triglav National Park, the restaurant is housed in a former hunting lodge. Its proprietor, Tomaz Kavcic, stands on the shoulders of his family's business, which dates back to the 1890s. His kitchen takes constituents and flavors familiar to a Slovene palate and transforms them into entirely new creations. A gin and tonic is served immersed in dry ice, (to help carry the aroma of juniper). Servings of bear jowl and paw seems unsettling at first, but less problematic when you taste these tender, piquant morsels. If nothing else, the plates at this 17th century lodge-come-eatery are as dramatic as their alpine surroundings.

Eating in the Vipava Valley

Distinguished by its soft climate and great produce, the Vipava Valley is as well known for its cuisine as for its stunning scenery. Orchards of peaches and apricots swell with succulent fruits before fall sets the forest foliage aflame. Viticulture is central to life in its hamlets and villages, which lie on the border of the Karst wine region. 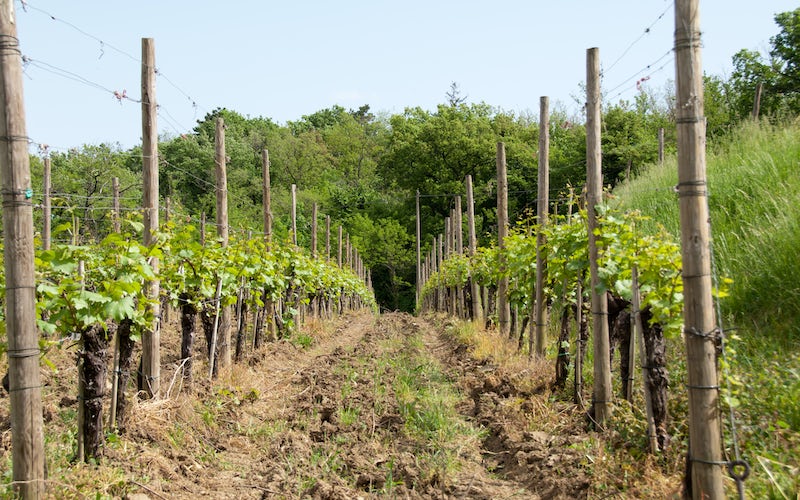 One of the area's best regarded restaurants is Majerija. Sequestered among vines and fruit trees, the spot is becoming more and more popular with international travelers. The scent of woodsmoke and rosemary float in through the air as you make your way along the boulder-scattered path to the entrance.

Along with Slovene classics like Zlikrofi dumplings stuffed with smokey bacon, and Jota (turnip soup), tuck into home made Mlinci pasta topped with local smoked duck breast and broccoli. Pair these dishes with Zelen, a sophisticated white produced at the nearby Burja estate. Clear to the taste yet scenting subtly of cheese, it's unique. 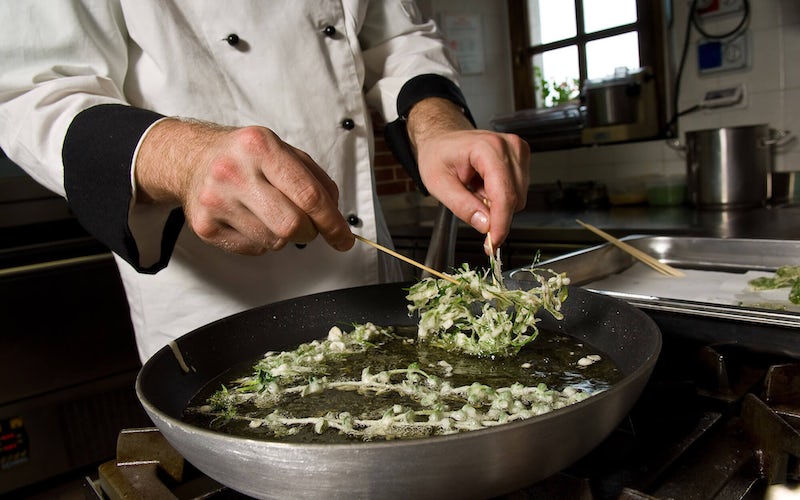 Rich reds are the calling card of the Karst region, which lines the border with Italy. Distinctive, iron-rich soil provides the nutrients needed for Refosk grapes to flourish, from which the celebrated ruby red Slovenian wines are made. They are often enjoyed along with similarly claret-coloured Prsut, a prosciutto-like air dried ham that's also produced locally. Follow the Karst Wine Road to amass a lengthy list of favourite family-run vineyards from around 170 different producers. 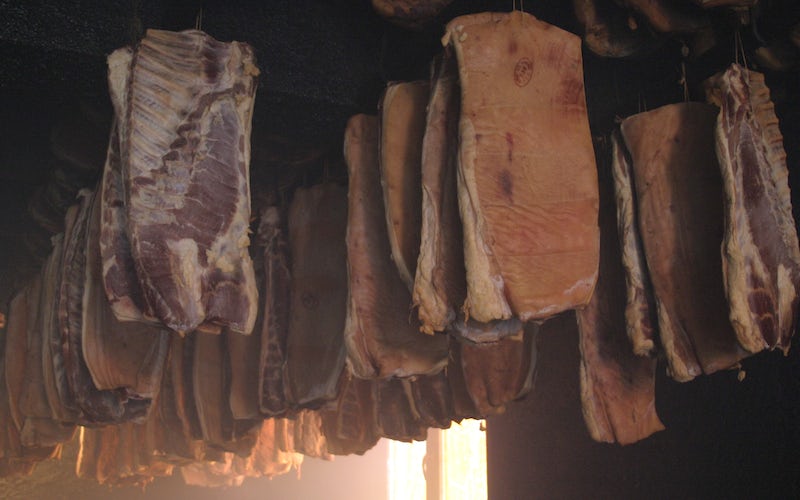 The notorious Bora wind, beaming sunshine and arid conditions create the perfect crucible for Karst's centuries-old wine producing tradition. One of the most picturesque stopoffs is the fortified village of Stanjel. The population of 370 have their own castle, and enjoy lush gardens which grow just beyond its muscular structure. Another highlight is the four-century old Hotel Kras, situated in the hamlet of Pliskovica. Embraced by lavender and vineyards, it's just 25 kilometres from the spectacular Skocjan Caves. 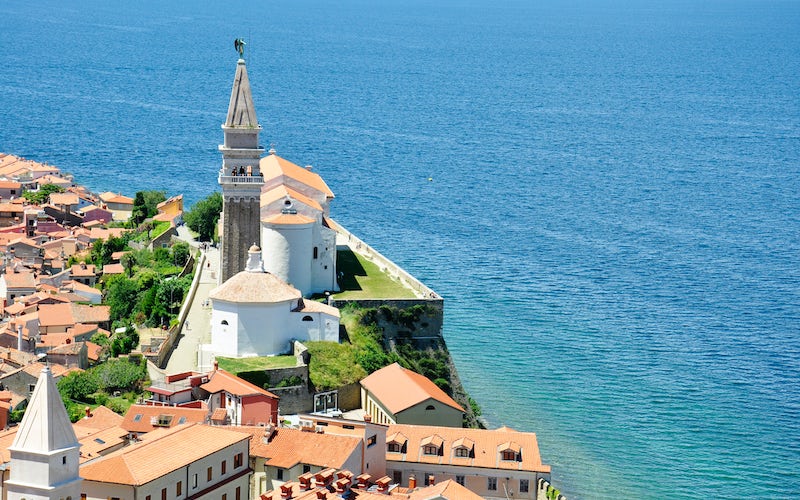 Ironically, the slow food movement is gathering pace around the world. However, it has always been intrinsic to Istria's cuisine, so eating here feels a little like coming home. Izola's idyllic architecture is a welcoming sight as you arrive this truffle-hunter's haven. Locals will take you on truffle hunting tours before feeding you the fruits of your labors.

Dig in to home made Fuzi, a typical Istrian pasta — flavored with truffles, of course. You will also be served Zganje, a typical Slovenian firewater. There are several versions of this schnapps-like liquor and all are worth trying. Or at least, dedication to authentic Slovenian gastronomy is a convenient cloak for one's hedonistic tendencies. Slivoka is made with plums, Sadjevec with mixed fruits, Brinjevec with juniper, and Medica, with honey. Even the Slovenian clergy have their own variety. Carthusian monks at the Pleterje Monastery produce Hruska pear brandy by bottling the fruits on the branch. Perhaps the most distinctive in flavor though is Borovnicke, made with forest blueberries. The best bottles originate at the Kejzar family distillery in Pohorje, and are also sold at Vinoteka Dvor in Ljubljana. 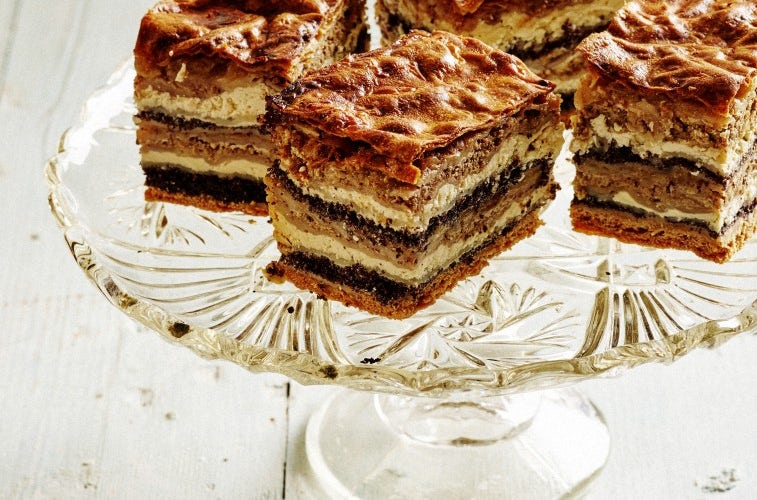 Desserts in Slovenia synthesize the naturally flavorsome produce of Italy with the sophistication of Hungarian baking, a happy mix. On the easternmost edge of the country, Prekmurje produces the country's favorite dessert. Building on a foundation of shortbread, the cake rises in pastry storeys separated by sweet curd, poppy seeds, walnuts, and apples.

The legendary Gibanica cake is best sourced at Gostilna Rajh, where a Gibanica-flavored ice cream tempts visitors in the summer. If you're in Ljubljana, you can get your Gibanica at Gujzina, a restaurant in the Old Town that's devoted to Prekmurje cuisine. So concludes this sweet yet short summation of Slovenia-based culinary adventures. You'll have to discover the unabridged version for yourself.