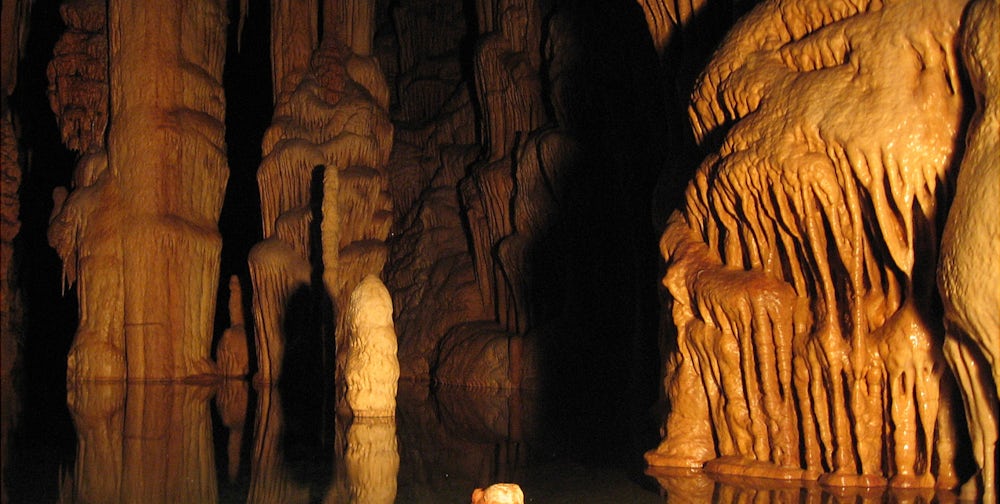 The 6 Best Caves in Slovenia

No trip to Slovenia is complete without visiting at least one cave. A maze of caverns awaits you beneath the ground, full to the brim with amazing karst formations.

Travel to Slovenia and you won’t be short of things to do. With its stunning coastline, charming cities, wild nature, and rustic charm, Slovenia is a place of awe-inspiring beauty. But another side of the nation is hidden from daylight: The vast underground network of karst caves that run beneath the ground is a must-see attraction with otherworldly appeal. With its own ethereal ecosystem and jaw-dropping topography, this invisible side of Slovenia is well worth a visit. 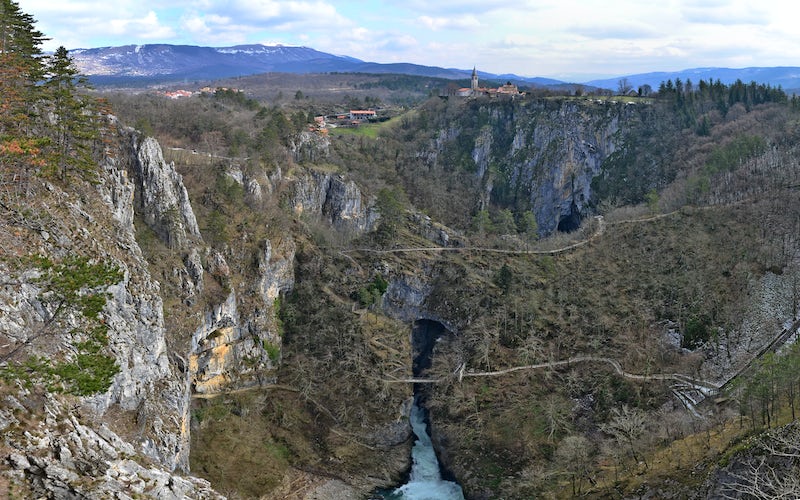 The Reka River has carved out the Skocjan Caves, a designated UNESCO World Heritage Site, for millennia. The river springs from below the Sneznik Plateau and corrodes the karst in its wake, leaving behind a massive complex of cave systems, eventually flowing into the Dead Lake at the end of the cave. From the vast Martel Chamber, with its beautiful stalagmites and stalactites, to the Tominc Cave, where a prehistoric community once lived, the caves take your breath away. But the gorge makes a trip to the Skocjan Caves a truly memorable experience, and you won't forget a walk over the sky-high suspension bridge in the underground canyon.

Located near Divaca in Slovenia’s southwest corner, the Skocjan Caves are easy to access. To travel by car from either Koper or Ljubljana, simply follow the A1 and take the Divaca exit, watching out for the sign for the caves. There is a train station in Divaca and from there it's just under a two-mile walk, or you could take the free bus that runs regularly between Divaca and the caves during the months they are open: from May 1st until October 31st. Visitors can choose between taking a two-hour guided tour through the cave complex or following a path alongside the Reka River. The second option is possible with or without a tour guide. 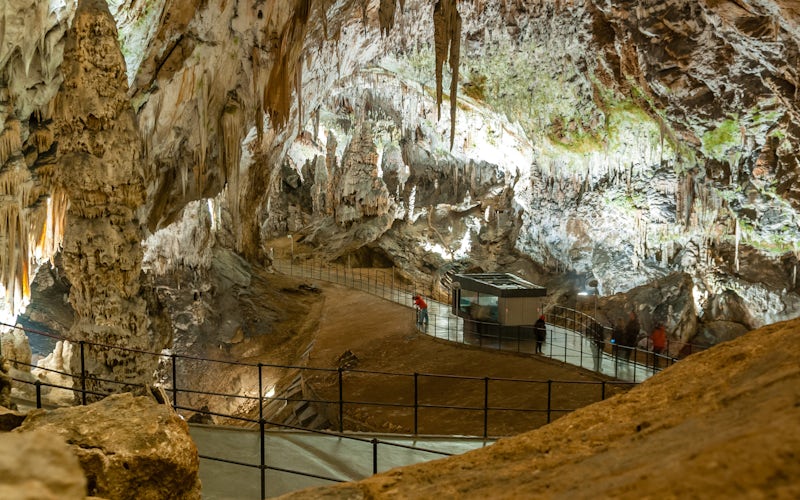 The longest cave in Slovenia is Postonja, another one of the world’s most famous karst caves. Postojna’s very own railway, built over 140 years ago, carries visitors through a maze of dramatic karst corridors and chambers, drawing attention to all of its most important features. Jagged hallways full of stalagmites and stalactites await you, and highlights include the Gothic Hall and Spaghetti Hall. The most beautiful attraction of all has to be the 16ft-long rock formation, Brilliant, named for its white sheen and majestic proportions. The olm, a salamander that makes its home in the caves' waters, reaches up to 30cm in length. This strange-looking pink creature has been nicknamed the "human fish" because of its flesh colour. It is under legal protection, but visitors to the caves may be lucky enough to spot one in the vivarium, where they can stop to learn about the diverse fauna that inhabit the caves.

It is easy to reach Postojna via the A1 from either Ljubljana or Koper, or by taking the A3 towards Divaca from Trieste and then getting onto the A1. Regular buses to and from Ljubljana, Rijeka, Koper and Nova Gorica stop at the cave (the Postojnska Jama stop), and it is also possible to visit by train. Visitors are given a guided tour of around an hour and a half, which includes the train ride. Next to the cave is an exhibition and at the time of writing, visitors to the exhibition pavilion gain free entry to two other exhibitions. 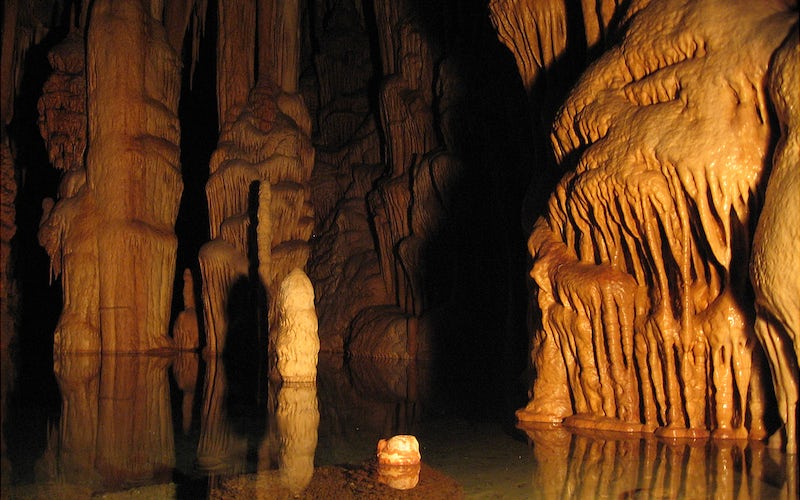 Of an undetermined age, Vilenica Cave is the oldest show cave in Europe, and possibly, the world. Open to visitors since the 1600s, the cave feels like a magical land as you explore its hauntingly beautiful caverns, and local lore says it's inhabited by fairies. Follow the winding corridors decorated with dripping karst formations until you come to the Ally of Dripstones, and next the Red Room, with its vast, earth-colored stalagmites and stalactites. But the Hall of Fairies really steals the show: a giant gallery overlooking a cavern filled with giant limestone formations. Here you feel as though you may indeed be in fairyland.

Between April 1st and October 31st, Vilenica Cave is open to visitors every Sunday and on Slovenian public holidays. It is possible to arrange a group tour outside these times if you call in advance. During the winter period, at the time of writing, you need to book tours of the cave in advance. A guided tour usually takes about one hour. Each autumn, Vilenica’s impressive dance hall opens to the public in order to celebrate the Vilenica International Literary Festival. There are talks and conferences by international authors, and festival visitors can take part in a stimulating selection of cultural events. 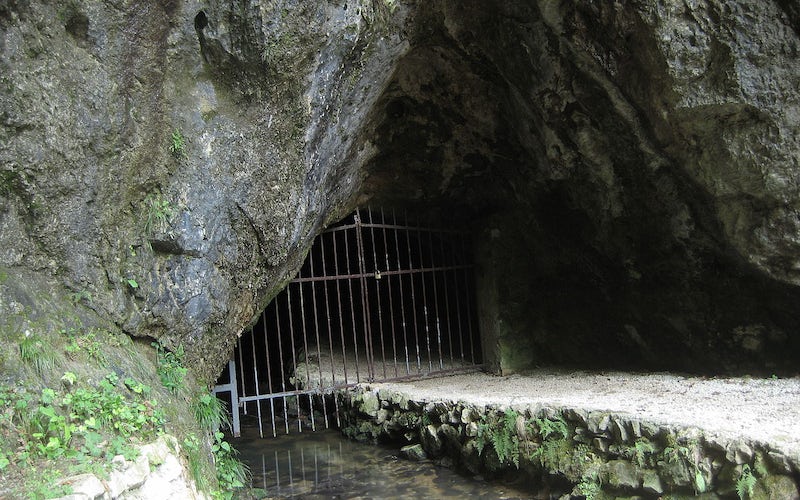 Its name translates as Hell Cave because of the steam rising out of it in the winter months, but Pekel Cave makes for a more pleasant visit than the name suggests. Divided into two levels, the watery part down below and the dry part above, Pekel is home to a variety of karst formations that resemble animals and people. Here you will also find Slovenia’s highest underground waterfall along the Peklenscica Creek at 21ft tall. Moss and lichen-covered walls glimmer and sparkle with minerals carried in by the Peklenscica. Home to a rare beetle and many other creatures, the cave is truly wondrous.

Pekel Cave is situated in the heart of the Lower Savinja Valley, just outside Sempeter in the middle of the country. Just over 37mi away from Ljubljana, it is accessible by car via the A1 and E57. Sempeter has a train station, and buses run to and from town regularly. At the time of writing the caves are open between March 1st and October 30th, with regular group tours. It is possible to arrange visits outside of these times if you do so in advance. When exiting the cave, visitors find themselves in the lovely Loznica Natural Park, great for observing a variety of wildlife in an unspoiled habitat. 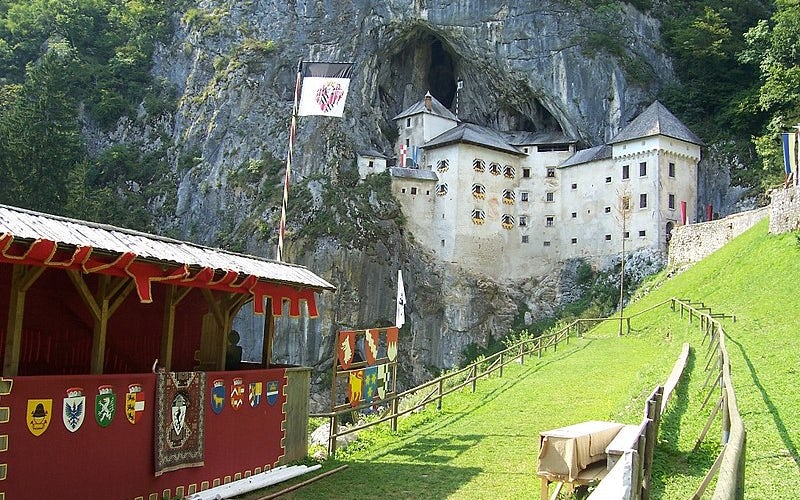 A Gothic-style castle built into the karst, set against the dramatic backdrop of Predjama Cave? It’s not hard to see why this is one of Slovenia’s most visited caves. Built in the 12th or 13th century, Predjama Castle is perched on a 400ft-high cliff, as though it is guarding the secrets that lie within. In the 15th century, Erazem Lueger came to own the castle. In defending his plot against the Roman Empire, Lueger is Slovenia's answer to Robin Hood and visitors can learn about his story by visiting the castle. But it’s the cave that really draws attention. Five miles have been discovered inside so far, and visitors are able to view a half a mile of it. Home to a colony of bats, Predjama Cave certainly lives up to expectations.

At the time of writing, there are 45-minute tours scheduled daily at 11am, 1pm, 3pm and 5pm between May and September. This is a rustic cave with no light, so you will get a torch to use during the tour. More rigorous adventure tours, including the East Passage, the narrow Wind Hole and Erazem’s Passage are available at certain times of the year. These tours demand a certain level of fitness, as they include some climbing and water hurdles. You can easily access Predjama from Postojna Cave by bus or train, as the two are a quick five miles apart.

Arguably one of Europe’s most beautiful caves, the Krizna Jama Cave is not a show cave. With no illumination and, except for the cave itself, no tourist attractions, this is a true natural wonder. At over five miles long and with no less than 22 underground lakes, the Krizna Jama Cave invites visitors to navigate part of it in a rubber dingy. This is Slovenia’s only naturally preserved cave, and a visit will make you feel as though you’ve stepped into another universe. Intricate karst formations surround you, and along the way you will see huge bear skulls and maybe even some wildlife that makes the caves its home, including: hedgehogs, bats, cave worms and cave spiders.

General tours of Krizna Jama Cave take around an hour and involve going on a short walk followed by a dingy ride. Longer tours are available but because the caves are protected, only 1,000 people each year may take the four-hour tour to Kaljarija. One hundred people may take the extended seven-hour tour to the 20th lake annually. All longer tours are by prior appointment only. The short tours run between April and June on the weekends and on public holidays. They run every day between July and September. Times vary throughout the year. You'll have torches and boots for use during the tour. Less than an hour away from Ljubljana, Krizna Jama is located off the A1 between Cerknica and Sneznik Castle.

Top Things to Do in Slovenia: Adventurous Travel Guide
Story