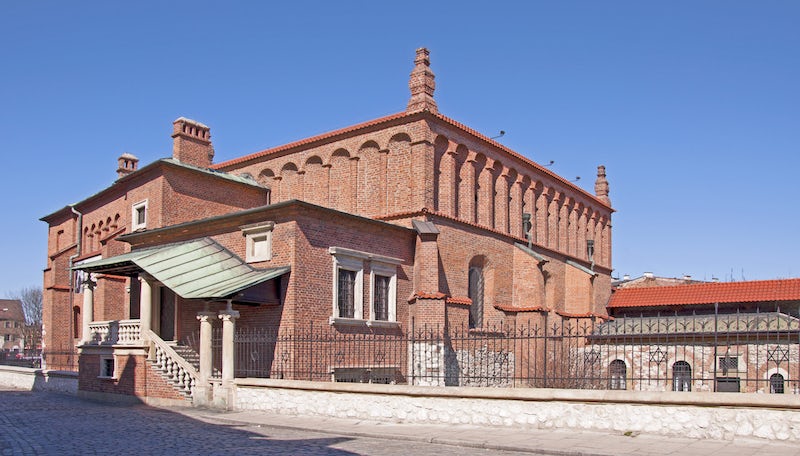 Take a fascinating tour of Jewish culture and history

This tour brings together the three most important places in Jewish history in Krakow.
Kazimierz is an original Jewish quarter. Today, Kazimierz is one of the most fashionable areas in Krakow, where synagogues still stand, old cemeteries, cafes and shops have been preserved.
The Schindler Factory Museum tells you about the horrors of World War II and Oskar Schindler's exploit.
The Jewish ghetto will tell you many stories and show you how it lived during the Nazi occupation in Krakow.You will see a part of the undestroyed wall around the ghetto, houses where thousands of displaced Jews used to live, the pharmacy "Under the Eagle", a monument with 68 chairs in the Heroes' Square in the ghetto.

Szeroka Street is the centre of old Jewish culture surrounded by old synagogues, palaces and majestic houses from the 16th, 17th and 18th centuries.

The Old Synagogue – Museum of Judaism is the oldest preserved synagogue in Poland and one of the most valuable monuments of Jewish religious architecture in Europe.

The Remuh Synagogue is the second oldest Jewish prayer house in Krakow. The synagogue and the adjacent cemetery form a unique and priceless complex of Jewish architecture and sacred art.

Plac Nowy – The New Square is a site of a daily food, vegetable, antique, craft and flea market of Kazimierz. Surrounded by cafes, bars and restaurants it is one of the most vibrant places on the map of Krakow.

The Tempel Synagogue is one of the four active synagogues in Krakow, but services are held sporadically, it is also a thriving center of Jewish culture, which hosts numerous concerts and meetings, especially during the Jewish Culture Festival.

The Corpus Christi Church is distinguished by its size, importance and architecture. Its beauty is best shown in the interior of the temple, where the gothic stone walls harmonize with the gold of the baroque.

The Father Bernatek Footbridge is a unique place in Podgórze, built in 2010 on the site of the former Podgórze bridge, it connects Kazimierz with Podgórze

The Ghetto Heroes Square is a square in the Podgórze district of Krakow. In the years 1941–1943 it was within the ghetto. It was a place of concentration of the Jewish population before transport to concentration camps. Currently, there is an unusual monument in this place - several dozen cast-iron chairs standing individually in the square. They symbolize property and belongings of Krakow Jews scattered on the streets after the liquidation of the ghetto.

ul. Lwowska and ul. Limanowskiego – the preserved sections of the ghetto wall

ul. Lwowska – a location of the ghetto Orphanage

A corner of ul. Jozefinska and ul. Limanowskiego – the location of offices of Jüdischer Ordnungsdienst (Jewish Order Police) and the ghetto prison

A corner of ul. Jozefinska and ul. Krakusa – sewer entrance – escape routes from the ghetto

ul. Jozefinska 18 – the building of the Jewish Social Self-Help Organisation