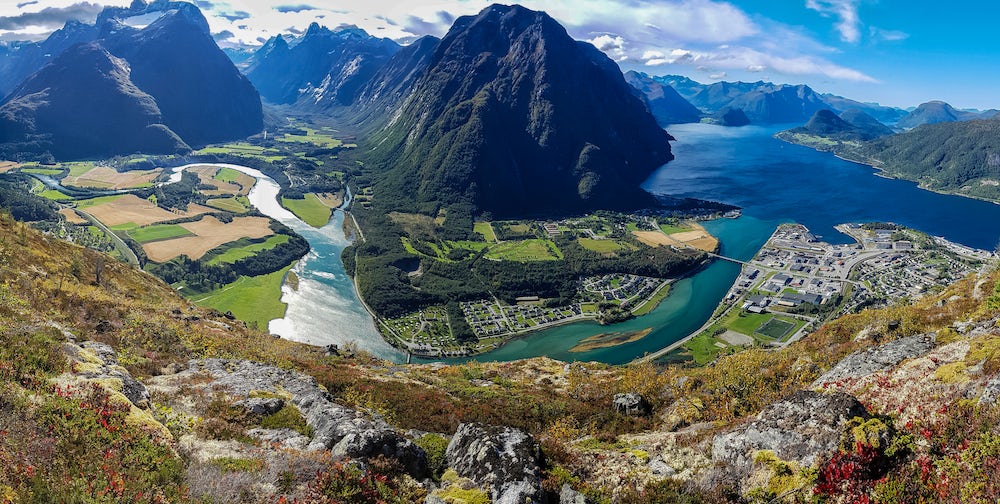 You surely have many destinations to choose from if your main goal while visiting Norway is to admire its fantastic fjords and mountains. Well, this guide should help you decide.

So you have heard about this Nordic Viking country called Norway, and the fjords and mountains that are allegedly breathtaking, you start doing some research and discover that there are no less than 1190 fjords in that country?! How are you supposed to make a decision which fjord to visit in Norway when there are more than a 1000 of them to choose from? Well, there is this place called Fjord Norway, better known as Western Norway.

Staying in this region will allow you to visit some of the longest, deepest, narrowest, but most importantly, the most beautiful fjords in the country or even in the world. If even National Geographic Traveler Magazine voted the Norwegian Fjords as the world’s best travel destination it should be worth it, right?

Some people might wonder what is so special about these fjords. According to Wikipedia, a fjord is “a long, narrow inlet with steep sides or cliffs, created by a glacier”.

A fjord is formed when a glacier retreats, and the sea fills up the resulting valley. Most of the fjords in Norway were formed in the most recent ice age, the Pleistocene Epoch which began about 2.6 million years ago and lasted until approximately 11.700 years ago.

From a geographical point of view the Norwegian “Vestlandet” (Western Norway) consists out of four counties. As the third largest region in the country it starts from a little further South than Stavanger and up to a bit further North than Kristiansund. The whole area is known for its untouched nature, fjords and mountains of course, current glaciers, waterfalls, snow, fish, fruits, fresh air, drinkable clean flowing water, adventure all around, just to name a few. 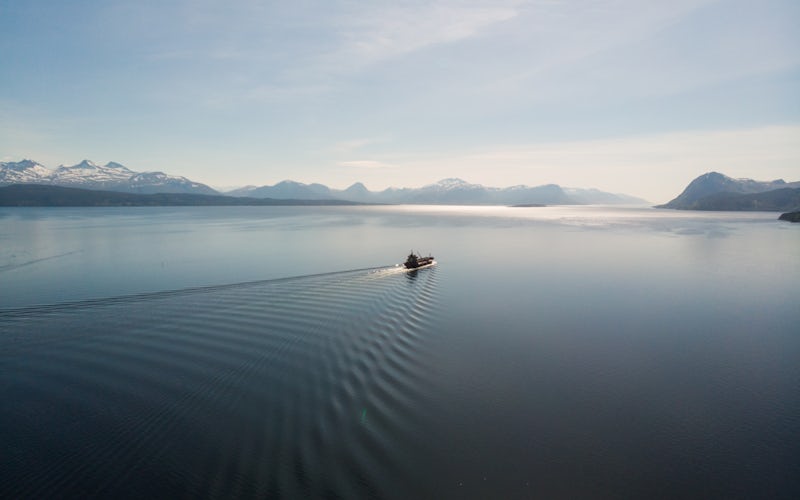 Commencing the boat journey through the fjords. Photo: PicturingWorlds.

The northernmost county of Western Norway is home to two of the most famous fjords in Norway: Geirangerfjorden, which is part of the UNESCO World Heritage list, and Hjørundfjord. 4 cities (Kristiansund, Molde, Åndalsnes and Ålesund) are great starting points for you to go and explore these fjords as well as many other hidden gems.

Ålesund, dubbed as “the adventure capital” of the fjords, offers you one of the easiest access points by flight to let you go straight into the fjords. While you’re coastal cruising and island hopping, you’ll see that the landscape has much more than only fjords to offer as well. Some of the best attractions of Møre og Romsdal besides fjords are: the Atlantic Road, the Rauma River, Trollstigen, Trollveggen, Gudbrandsjuvet, and Romsdalshorn. 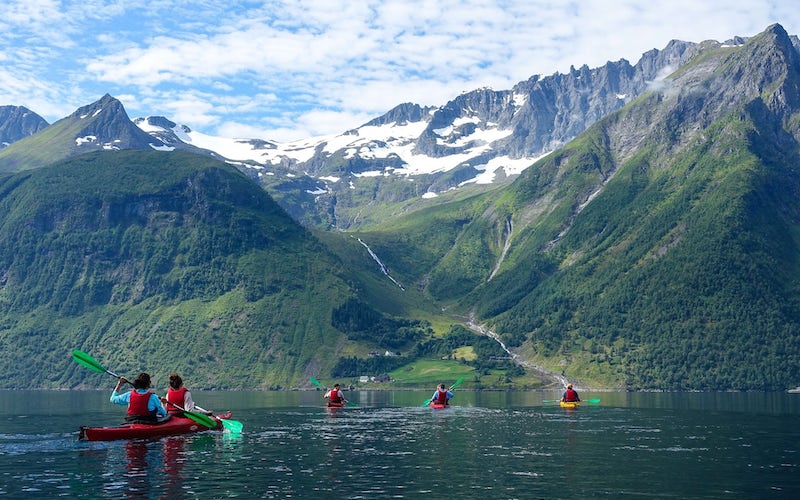 Once you have made your way down the coastline, you’ll end up in Sogn og Fjordane, which is the westernmost part of Norway. Steinsøy is an island in Solund kommune and is the westernmost point in all of Norway: 4° 30' 12'' E.Long. The largest icecap in Norway and  Norway’s longest fjord are two of many attractions in Sogn og Fjordane. Sognefjord, Norway’s longest fjord, will give you about 125 miles (200km) of dark blue water, mountains rising straight up from the fjord and pure untouched nature at its best.

Going further into the fjord you’ll be able to go into one of Sognefjord’s fjord arms called Nærøyfjord which is also protected by UNESCO’s World Heritage List. If you’re interested in exploring the icecaps further in you just have to pick out your axe, crampons, and glacier and choose between the Nigardsbreen glacier, Austerdalsbreen glacier, and the Briksdal glacier to explore what are the ancient roots of the formation of fjords.

As these are still living formations a tour guide is required to make your experience as safe and fun as possible. Other places worth a visit are Sogndal, Sandane, Nordfjordeid, Lærdal, Loen, the Flåm Railway, and various Stave Churches, to make deciding even easier 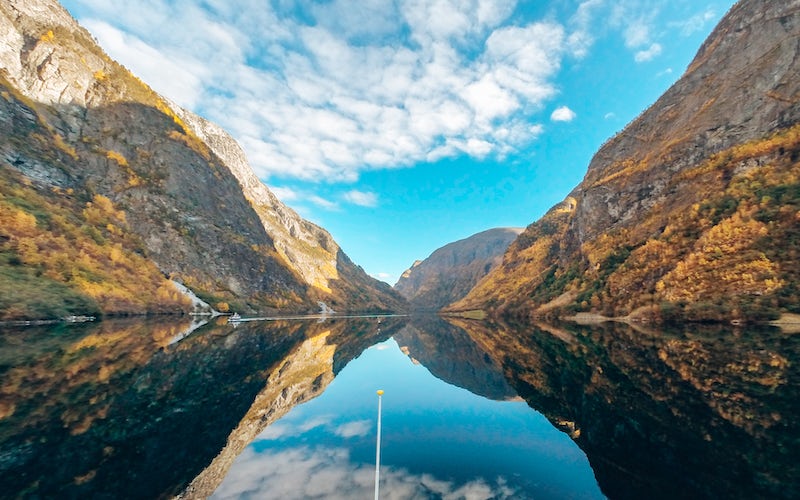 Hordaland is a county, located right in the centre of Western Norway. The crown jewel of Hordaland is Hardangerfjord, the second longest fjord of Norway and allegedly the prettiest place in the country during spring. It is known for apple trees blossoming in the spring, enormous waterfalls due to the melting snow, and the everlasting steep and pointy mountains.

Bergen is an ideal city to serve as a gateway to the fjords, as well as other iconic cities of Hordaland, such as Voss, Stord, and Odda. They will give you passage to one-of-a-kind attractions, such as Trolltunga, Mt. Fløien, Bryggen in Bergen, Vøringsfossen Waterfall, and Folgefonna Glacier (which by the way has one of three summer ski resorts in Norway). You read that right, in Norway you don’t have to stash away your skis, like ever. There is always a place where you can ski throughout the whole year. 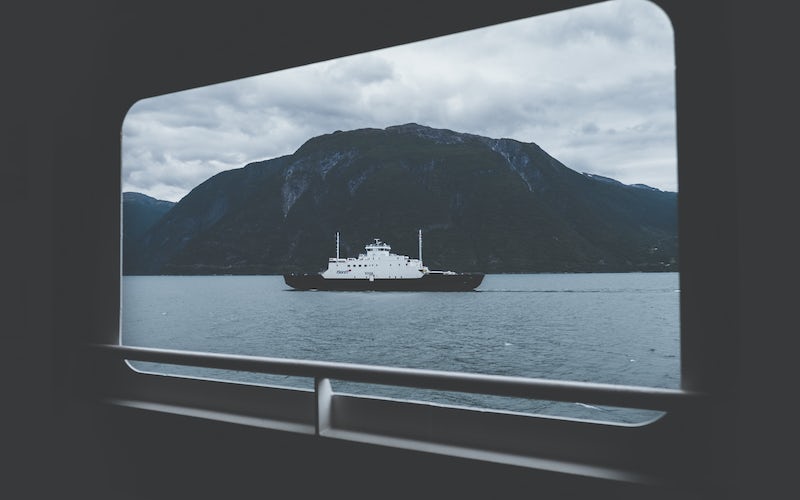 There are ferries take you across almost any fjord in Norway. Photo: Oskars Sylwan on Unsplash.

Rogaland is the southernmost county of Fjord Norway. It’s also the most important of the four counties in terms of history as it is the site where the oldest traces of the settlement of Norway have been found, namely in Galta, Rennesøy. The two main fjords to be explored are Boknafjorden and the Lysefjord. Lysefjord will give you access to surrounding mountains as Kjerag and Preikestolen (the Pulpit Rock). These two crown jewels of hikes will offer you an incredible view from above over the county.

Rogaland has more flat landscapes than the rest of Western Norway and is home to ten cities. To take a break from all of these astonishing moments of gazing at clear blue water and magnificent views you can head to Sola Beach in Stavanger to relax and let all of Norway’s beauty soak in. 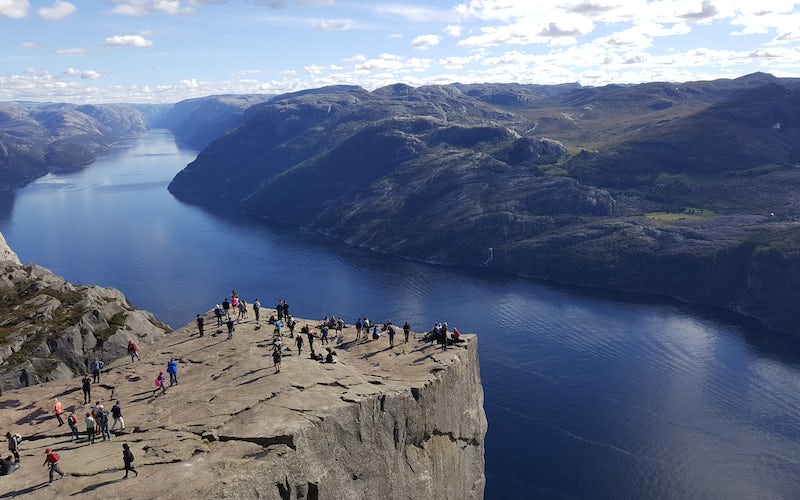 Looking down over Lysefjord from the Pulpit Rock, Preikestolen. Photo: PicturingWorlds.

What Is Socially Acceptable in Norway? A Guide to Norway’s Etiquette and Way of Life
Story