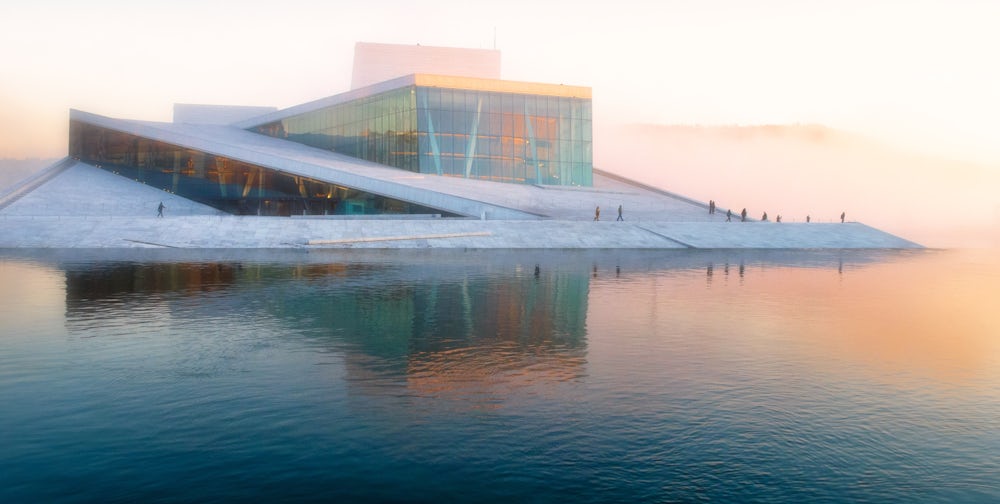 A Few Cool Things to Do in Oslo

If you're looking for cool, unusual, and unique things to see and do, Oslo is the place to be. Here are some ideas of off-the-beaten-path delights to discover in the Norwegian capital.

Oslo is one of the hippest cities in Europe, and the perfect holiday destination. Exciting maritime attractions and cool urban vibes combine to make a city that's alive with both tradition and modernity. Brimming with fascinating museums, one-of-a-kind attractions, and a lively cafe and bar scene, Oslo is packed with things to do, see, eat, and drink. From toboggan runs to tiki bars, Oslo has something unusual around every corner and there's always something new – and often quite unusual – to explore. Wherever you travel in Norway, you're sure to find something exciting, cool, and strange, and those three words could certainly be used to describe the unique delights of Oslo.

Frogner Park is a delightful green space in the heart of Oslo. It is a beautifully landscaped park that dates back to the 17th century and is a wonderful place to visit all year round. So far, so good – but so what? All major European cities have lovely parks, don't they? Yes they do, but not like this. As well as a lake and a manor house, Frogner Park is also home to the strange and magnificent Vigeland Installation. 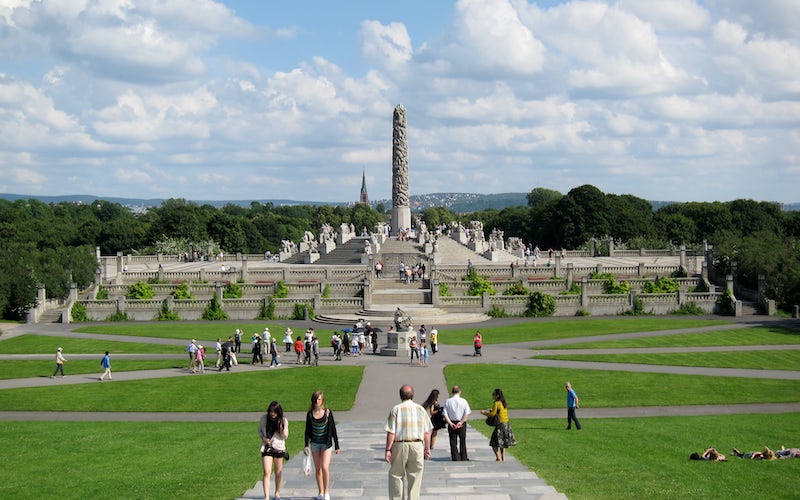 Comprising over 200 statues made from bronze and locally-sourced granite, this unusual attraction is made up of sculptures from the strange mind of Norwegian artist Gustav Vigeland – who also designed the Nobel Prize medal. Erected during the 1920s, the installation is filled with statues of huge angry babies, sculpted fountains, and human forms engaged in all manner of mad contortions. Elsewhere in the city you'll find yet another open air sculpture installation, the Ekebergparken Sculpture Park, which features works by artists as diverse as Damien Hirst, Auguste Rodin and Salvador Dali.

Whether you know it or not, you're already very familiar with at least one iconic piece of Norwegian fine art. Edvard Munch's The Scream – the skull-faced man screaming on a bridge – can be found on everything from t-shirts and fridge magnets to towels and mobile phone covers. It's simply everywhere. If you want to see the original, head to the Munch Museum in the Gamle Oslo district. As well as being home to The Scream painting itself, the museum contains over 1000 Munch paintings and 18,000 prints. Naturally, it also has a gift shop, so you can stock up on all the latest Munch merchandise!

Winter sports are a religion in Scandinavia. Skiing, curling, and ski-jumping are all ingrained in the Norwegian DNA. Perhaps the most exciting, enjoyable, and convenient way for visitors to experience Norway's rich sporting heritage is with a visit to the Korketrekkeren bobsleigh run.

Literally translated to 'The Corkscrew,' Korketrekkeren has a long and proud history, having hosted the bobsleigh events during the 1952 Winter Olympics and the World Championships three years later. It is now open to the public and makes for a memorable day out. The bobsleigh run is a full two kilometers long and takes a good ten minutes to get from top to bottom (not counting any 'unplanned stops' you might make), so it's not for everyone, but it makes for a great, energetic day out for anyone looking to enjoy a little exercise. Do be advised that Korketrekkeren is only open when there is enough snow to make it safe and worthwhile for visitors to use. 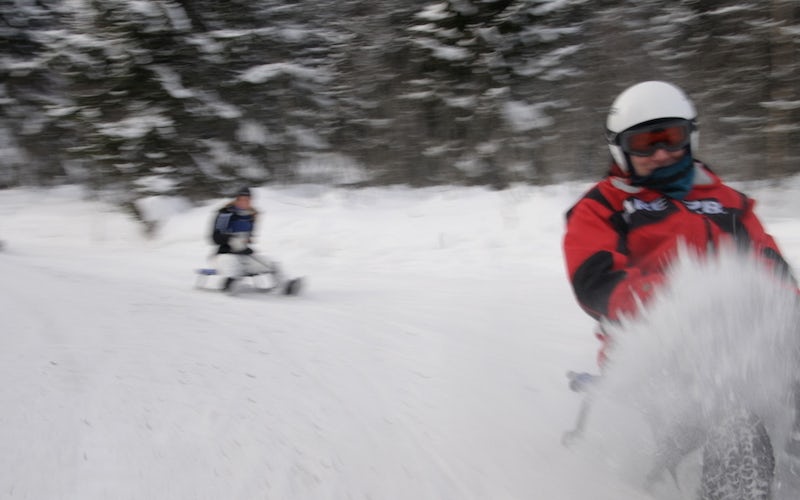 Sledding down Korketrekkeren will get your adrenaline pumping for sure. Flickr/Zen Whisk.

Sleds can be rented very cheaply – just in case you forgot to pack your own – and you'll be happy to hear that when you get to the bottom of the run, all you need to do is hop on the Metro train which is waiting to take you back to the top for another run. Good news for weary limbs!

If you're looking for the coolest bar in Oslo, you may have trouble locating it. Tucked away behind a beauty parlor in Storgata, Himkok is not easy to find, but this cool bar/speakeasy/distillery is well-worth hunting down. Chilled vibes, groovy tunes, and handmade spirits make Himkok by far the most chic bar in all of Oslo. Vodka, gin, and aquavit are all produced on the premises, and the house cocktail – Fjellbekksan, a blend of handmade aquavit mixed with sake, elderflower, and syrup – is heartily recommended. 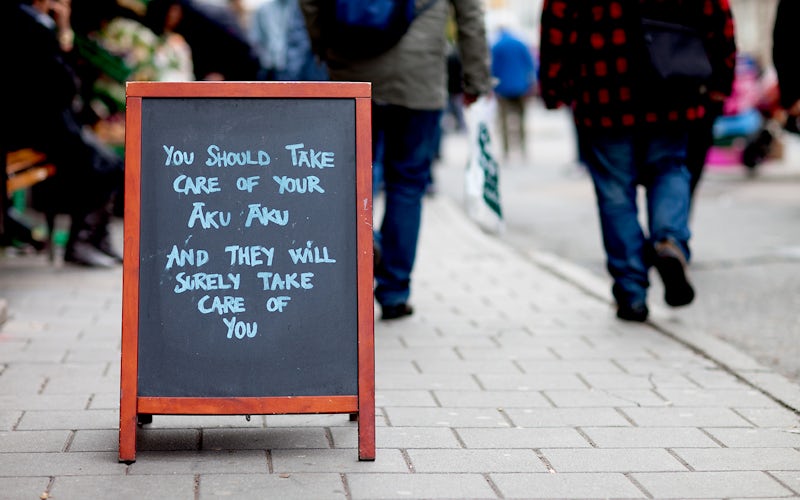 In front of Aku-Aku. Flickr/Pål-Kristian Hamre.

One of the most interesting places to grab a drink in Oslo is Aku-Aku in the Løkka district. A little Polynesia has been transported to the heart of Scandinavia in this cosy bar decorated with wicker furniture, canoes, and South Seas ornaments. But why Polynesia? The answer makes more sense than you might expect. The bar is in fact a testament to the Norwegian explorer Thor Heyerdahl, who sailed on a handmade balsa wood raft from Polynesia to the U.S. in an attempt to prove his theory that the local people were the first to discover America. Plenty to think about while you're enjoying your lemongrass beer from a skull-shaped glass.

The Underwater Pub continues the aquatic theme. While not actually underwater, this beloved pub is nevertheless decorated in a seafaring theme. This marine-themed pub has been an Oslo institution for decades and is notable not only for its deep blue decor, but its free opera nights. Twice weekly students from the nearby music academy put on opera nights to show off their vocal prowess.

What to Eat (and Where)

If you travel to Oslo, you have to try traditional Scandinavian cuisine at least once. Some of it can look a little challenging, but it's well worth sampling. Perhaps the coolest spot in all of Oslo to find traditional Norwegian food is Kaffistova, near Rosenkrantz's Gate. Opened in 1901, this well known cafe has traded in its ornate wood paneling for a cool, hip, minimalist style. The food, however, remains as traditional as it gets. Specialties of the house include such Scandi delicacies as dumplings, salted cod, and sour-cream porridge. Oslo is not known for being an especially cheap city to visit, but prices here are reasonable and the portions are large enough that you can fill up for the whole day! 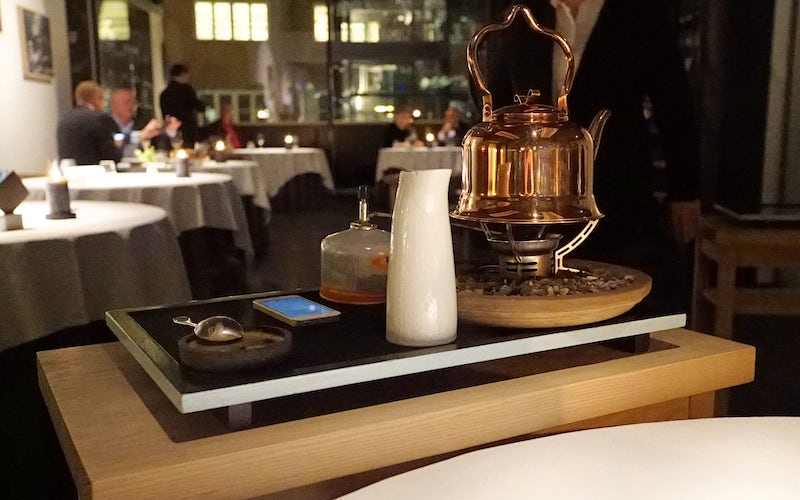 Maaemo is so cool that it's positively arctic! This Michelin-starred restaurant also serves typical Norwegian cuisine, but offers a markedly modern twist on old favorites. Everything here is local, wild, organic, and/or biodynamic. Rated one of the Top 100 restaurants in the world, everything about Maaemo is a little special. From its chic, mirrored exterior to its entertainingly presented dishes, Maaemo takes great pains to offer a unique dining experience. Is it cheap? No, it's not. But if you are in the mood for a special night and want the very best in traditional Norwegian dining then you just have to head to Maaemo.

Do you love bottles? Little bottles? Lots of little bottles? Good, then head to the Mini Bottle Gallery which has over fifty thousand of them! You might not be surprised to learn that this is the only museum of its kind in the world. Set up by a wealthy – and some suspect eccentric – brewer, the contents of most of these bottles are supremely alcoholic, but you'll also find little glass containers filled with fruits, worms, and even mice.

There's nothing cooler than a Viking ship. All that plunder, adventure, and romance of the open sea just scream Scandinavia, and the Viking Ship Museum gives you the chance to embrace your inner marauder. The centerpiece of the museum is the Oseberg Ship. Built sometime around the 9th century, the ship was discovered in 1903 almost fully intact (with two skeletons aboard!). It is now housed in the museum along with two other fully restored ships from the Viking era.

If you're looking for a dose of culture that's a little more up to date head to Kulturhuset (The House of Culture). Scandi-hip doesn't get Scandi-hipper than this. Part-coffee shop, part-bar, part-event space, part-library, the Kulturhuset is one of the coolest spots in all of Oslo. A cafe style workspace with free WiFi during the day, it transforms into a hip bar at night. Once you've gorged on all the cake and flat whites you can handle, simply pack away the laptop and enjoy one, two, or more of the beers from one of the many bars that are to be found on the four floors of this hipster paradise.

Shop 'til You Drop 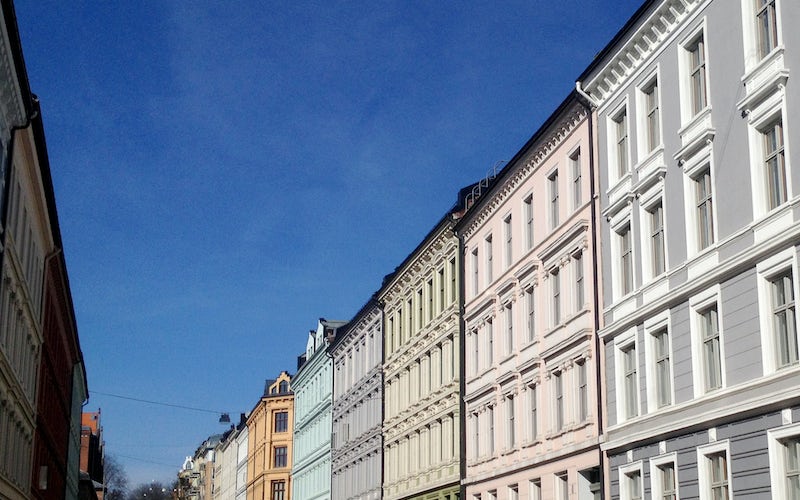 Speaking of hipster paradises, Oslo is a real treasure trove of vintage stores. From records to ornaments to clothes, Osla has everything kind of garment you could wish to find. The cool district of Grünerløkka isn't just for bars and cafes. There's also a whole host of great vintage shops to explore. Velouria Vintage on Thorvald Meyers Gate is, as the name suggests, a retro heaven. Stocking all manner of vintage clothes, you're sure to find something stylish to sport around town. Fransk Bazar on Grünersgate has clothes and so much more. Here you'll find posters, lamps, ornaments, and general esoterica. It's the perfect place to pick up a curious memento of this unique city.