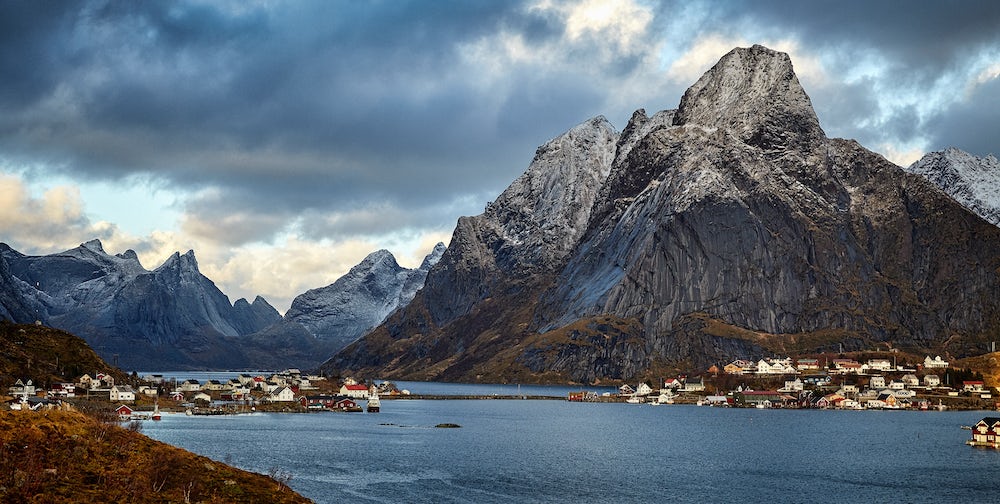 The Top 10 Attractions in Norway

Wondering where to go in Norway? Here's a list of ten attractions that are without a doubt worthy of a visit.

What should you do when you’re looking up destinations in Norway, reading through travel guides of Norway, and researching the best places to spend your once-in-a-lifetime experience? We get it, it can be overwhelming and hard to choose from because you don’t want to spend all that money and end up making the wrong decision right? It is totally true, Norway has a real abundance of attractions. However, you can also look at it from the upside. There are literally no bad choices to make!

Nonetheless have we gone ahead and explored the entire country for you and created a list of the top 10 of attractions in Norway. 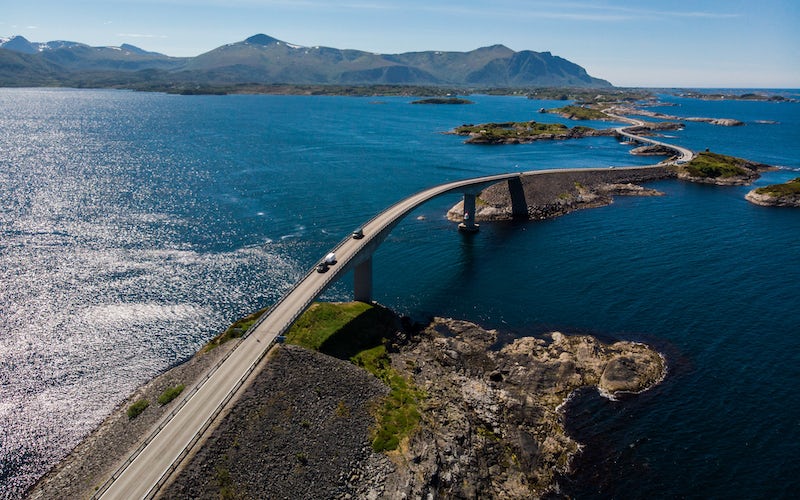 8 bridges allow you drive from island to island. Photo: PicturingWorlds.

Don’t let nr. 10 fool you. This engineering masterpiece was voted “Engineering Feat of the Century” in 2005 and won’t stop to sweep you off your feet, and hopefully not off the bridge. Being a connection of eight bridges in total and over little less than +-30000 feet (9000 meters) it is known amongst many to be the world’s most beautiful drive.

The whole coastal road alongside the islands and mainland will offer you unforgettable sceneries, traditional fishing culture and history all in one spot. As a bonus you don’t even need good weather to enjoy the Atlantic Road. According to some, its true magic really comes out on stormy weather when you can experience big waves bulging into the bridges and splashing all over the coast line. 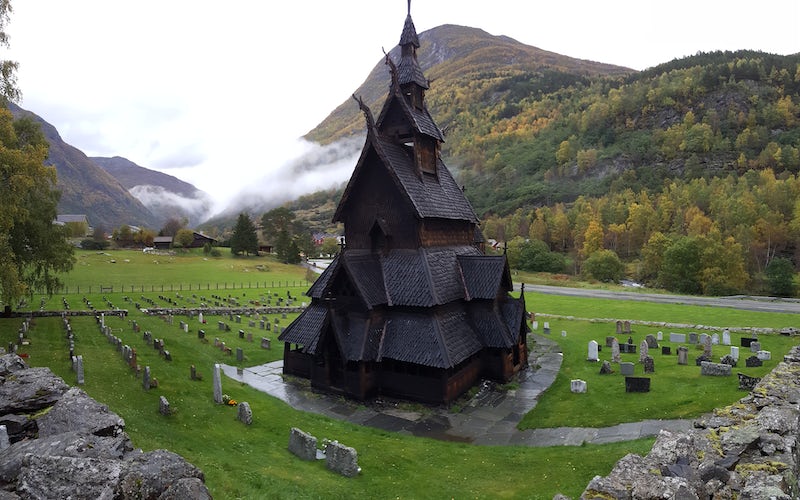 Situated at The King’s Road in the municipality of Lærdal (3 hours from Bergen) is the ever so special “Borgund Stavkyrkje” or Borgund Stave Church. Dedicated to the Apostle Andrew it was built around 1180 and is one of the best preserved stave churches in Norway. Is it the carvings of dragon’s heads, or the flawless wooden construction or the gorgeous portals? It is distinct without a doubt.

If you happen to be far away from the area and still have this stave church on your bucket list you don’t have to worry –  there are about 28 stave churches left to be discovered all over Norway and all built around the 12th and 13th century. 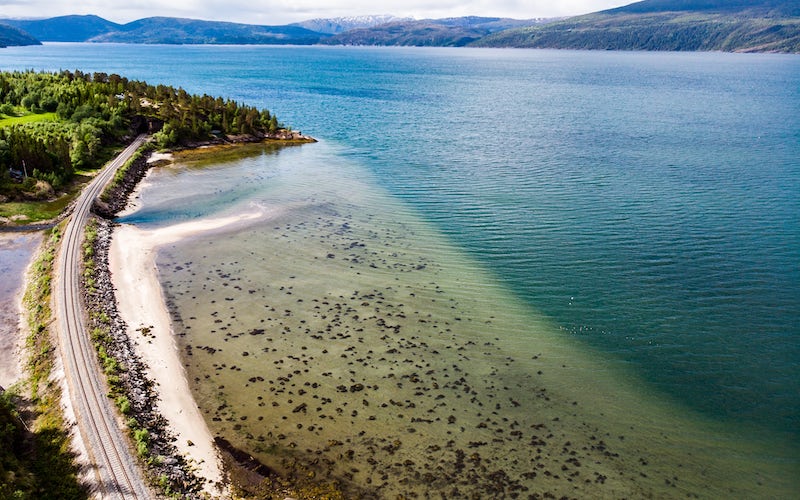 A train ride with an ocean view. Photo: PicturingWorlds.

Train lovers looking for adventurous rides in Norway are certainly in for a treat. Whether it is the Bergen railway taking you over Hardangervidda national park, the Dovre railway driving through Gudbrandsdalen valley, the Rauma railway taking you along the Trollveggen cliff face, or last but not least Flåm railway offering you the ultimate combo of fjords and mountains all at once, there is nothing but epic scenery waiting for you. 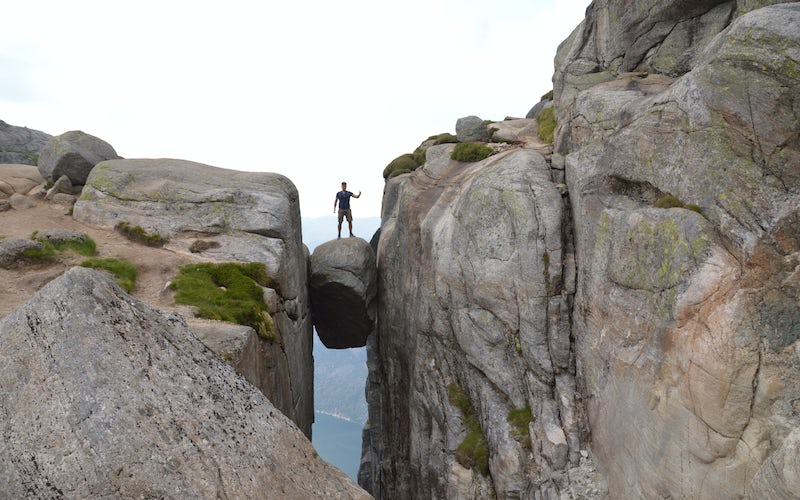 The road the let the trolls out, Trollstigen. Photo: Unsplash/Matt Lamers.

Since there is too much beauty to be explored throughout Norway I’ve gathered three noteworthy hikes in the South of Norway. Kjerag is an incredibly picturesque mountain. If you do the hike, you'll eventually witness a peculiar big rock hanging in an abyss (Kjeragbolten). You can see it on the photo above.

The second one, Preikestolen (Pulpit Rock), is a bit less steep and possible to do for almost everyone who is able to walk for +-2h up a mountain. Ending up on the biggest plateau on the top it’ll be your perfect lunch spot with the possibility of, for those who dare, letting your feet dangle from the edge overlooking the entire landscape and Lysefjord.

Trolltunga, or The Troll Tongue, is suitable only for the most active amongst us. The Troll Tongue doesn’t give itself away very easily as it will take about 5 hours in total to hike all the way up to this spectacular cliff, or 16.7 miles (27 kilometres). The length of the hike depends on your physical ability of course. But I can promise you, rising up to about 3600 feet (1100 meters) above sea level a spectacular scenery will be served as a reward for your bravery. 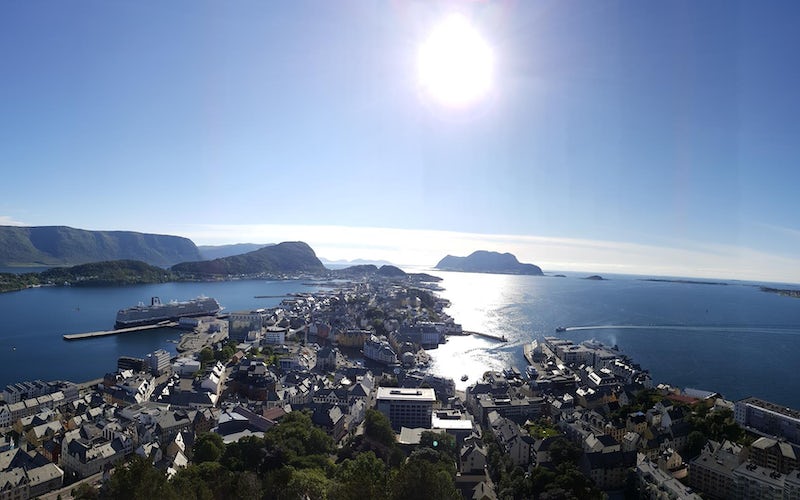 The adventure capital of the fjords, Alesund. Photo: PicturingWorlds.

Ålesund could be dubbed as the "Adventure Capital of the Fjords" since it has adventures hidden in every corner. Whether it is to go hiking, kayaking, skiing, fine-dining, seal or bird watching it has something in store for everyone. After the disastrous “Ålesund fire” in 1904 that burnt down the whole city, except for a couple of houses which are still possible to visit nowadays, it rose back from its ashes. In no more than 3 years almost the entire city was rebuilt again.

Moreover, architects from all over Norway saw this as a unique opportunity to both ensure that something like that never happened again, but also to create a whole city from scratch. This resulted in the unusual consistent architecture visible all over town and in the exact same style. Jugendstil, or Art Nouveau, was the dominant architectural style in that period and became the overall look of the new city of Ålesund. Nowadays it’s called “Venice of Norway”, and it will undoubtedly keep you amazed throughout your visit. 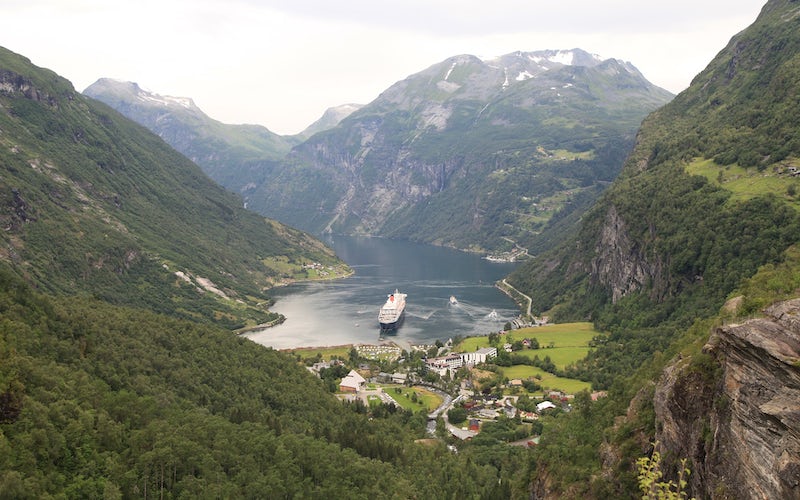 Being on UNESCO’s list of World Heritage sites is only the beginning of what Geiranger is all about. Geirangerfjorden is known to be amongst the most outstanding fjords in the world. Going on a boat tour throughout the fjord is a definite recommendation. This will allow you to be situated right in the middle of the spectacular scenery of dark blue fjord water gaze upon mountains raising straight from the fjord with more waterfalls than you can look at.

The best period to see the majestic waterfalls is from May onwards. This is because during that time all the snow will be melting from the mountains tops generating even more water to flow through the wonderful waterfalls. Dalsnibba is one of these iconic mountain tops. A platform is built there, located approximately 1500m above sea level, providing you with Europe’s highest fjord view from a road and without a doubt a view you’ll never forget. 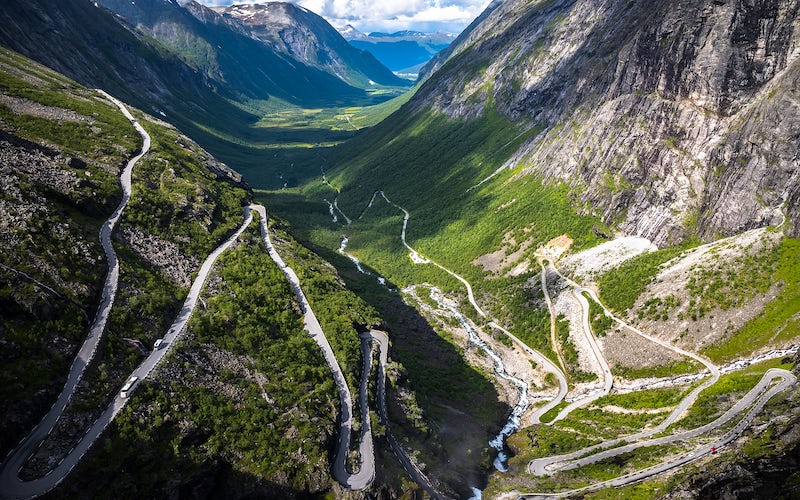 The road the lett the trolls out, Trollstigen. Photo: Unsplash/Matt Lamers.

A little bit further than Geiranger you will find the amazing Trollstigen, which is part of the Norwegian Scenic Route. Every year around the end of May the Norwegian road officials open up the mountain pass of Trollstigen to let the trolls go back down to the valley. With often having over 10 meters of snow throughout the winter you can start to imagine what kind of work it entails to clear up no less than 11 hairpin bends climbing up around 3000 feet (900 meters) vertical.

This piece of impeccable engineering dates back already more than a 100 years back in time and is mostly known among locals for spring touring in June. Throughout the rest of the summer Trollstigen offers incredible viewpoints, exciting road trip-views and the astonishing lookout from Stigrøra over the valley and its majestic waterfalls. 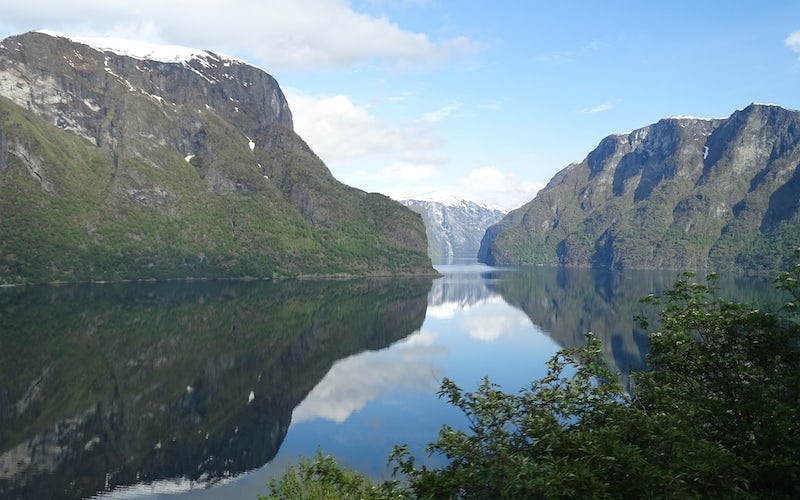 So one fjord has to be the longest of them all, right? Well Sognefjord tops that with not only being the longest but also deepest fjord in Norway. It stretches out over 127 miles (204 kilometres) inland and goes as deep as 4265 feet (1300 meters)! Not to mention the uniqueness of its surroundings.

The little brother and fjord arm of Sognefjord is called Nærøyfjord, which is joining Geirangerfjorden on the UNESCO World Heritage List. Being created in the Ice Age and formed throughout time by forces of nature, it now attracts people from all over the world. When following the fjord all the way inland you will end up at the foot of Jotunheimen National Park, have the chance to experience Jostedalsbreen glacier from nearby and have access to Breheimen National Park as the cherry on the cake. 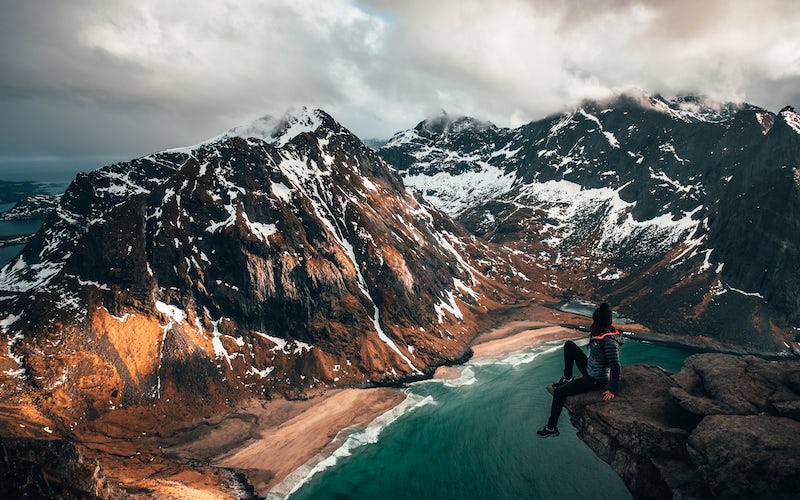 Looking over the beaches of Lofoten. Photo: Unsplash/Kym Ellis.

When scrolling through Instagram or Facebook and seeing pictures from Norway, 70% chance they originate from Lofoten Islands. This island archipelago stretches out over 109 miles (175 kilometres) of non-stop beauty. Situated already far above the Arctic Circle, it is still kept warm by the North Atlantic Current. The Islands are composed out of volcanic rocks and are actually the tops of a partially submerged mountain range.

The region is known for its tiny fishing villages, connection to the Viking age, and a football field in the most unthinkable place. Life is simple yet astonishing up in Lofoten. With its vast variety of landscapes you will be able to do all sorts of activities: hiking, boat trips, diving, fishing, skiing, and the list goes on. Located above the Arctic Circle, the chances of seeing the northern lights and the presence of the Midnight Sun have increased much more already than further south. 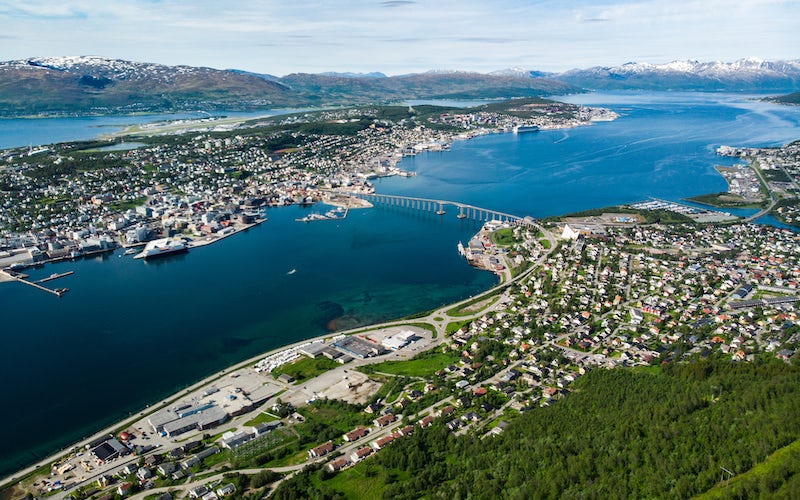 Tromsø during summer time, would it be day or night time? Photo: PicturingWorlds.

Talking about the natural phenomena of Northern Lights and Midnight Sun we have ended up at our Number 1 attraction in Norway. 218 miles (350 kilometres) above the Arctic Circle you will find the city of Tromsø, better known as the gateway to the Arctic. With its population of 75.000 inhabitants it is Northern Norway’s largest city and is a city of various “world’s northernmosts”. For instance, it is world’s northernmost “larger” city, has the northernmost botanical garden, university, planetarium, theatre, et cetera.

As it is Northern Norway’s largest city in Norwegian terms it is considered a fairly big city bringing along quite a vibrant nightlife outside of the natural phenomena. The reason why I think Tromsø deserves to be on top of the attractions in Norway is because it has it all. From the wonders of nature to the delights of pristine local food, from the busyness of city-life to the peace of being all by yourself in nature, from eternal daylight to complete polar nights where lady Aurora will come and wake you up almost every time the stars are shining bright.

5 Reasons You Should Visit Norway, the Happiest Country in the World
Story