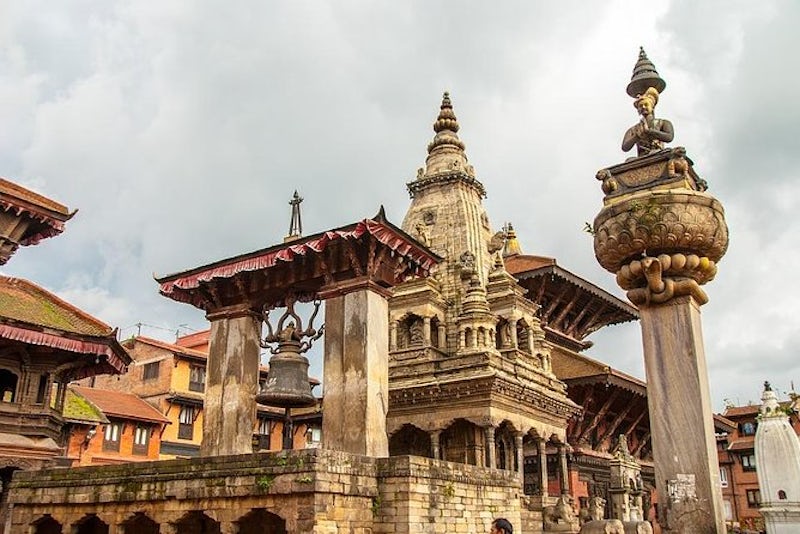 Explore the highlights of Bhaktapur with your own private guide on a half-day tour from Kathmandu. One of three holy cities in Kathmandu Valley, Bhaktapur has gorgeous temples and monuments

After breakfast, you will meet your tour guide at your hotel lobby at 10:30 am and head-off to do some sightseeing of Bhaktapur Durbar Square. The monuments to watch inside Bhaktapur Durbar Square are the following:
55 window palace: It was built in 1427 AD during the reign of King Yaksha Malla and was again remodeled in the 17th century by King Bhupatindra Malla. It is considered to be a unique masterpiece of woodcarving.
Golden Gate: The gate was constructed by King Ranjit Malla and is the entrance to the main courtyard of the palace of fifty-five windows . It is said to be the most beautiful and richly moulded specimen of its kind in the entire world.
Lion's Gate: The magnificent and beautiful gate was created from artisans and later their hands were cut off by the envious Bhadgoun King so that no more of such masterpiece would be produced again.
Mini Pashupatinath Temple: The holy god Shiva temple, the mini pashupati, is believed to be built right in front of the palace after a Bhadgaun king dreamed of it.
Batsala Temple: Batsala Temple was the stone temple of goddess Batsala Devi that included many intricate carvings; however, it was most famous for its bronze bell, known to local residents as "the bell-of barking dogs " as when it is rung, dogs in the vicinity bark and howl.
Statue of Bhupatindra Malla: This is considered to be the most magnificen statuet. The Statue of King Bhupatindra Malla can be seen on a column facing the palace in the act of worship.
Nyatapola Temple: Nyatapola means five stories - the symbolic of five basic elements. This is the biggest and highest pagoda of Nepal.
Bhairava Nath Temple: The Bhairab Nath Temple is dedicated to Bhairava the most fierce and manifestation aspect of lord Shiva. Move towards Pottery Square, where the streets are lined with small shops selling innumerable items produced in baked clay and the pavements are filled with black clay items drying in the strong sunlight. Visit Dattatraya Square. The Dattatraya Temple is the main attraction of the Square which is constructed by King Yaksha Malla. The temple is believed to have been built with the stem of a single tree. Visit The Peacock Window, it is also called the "Mona Lisa of Nepal", is a rare masterpiece in wood. Dating back to the early 15th century, the unique latticed window has an intricately carved peacock in its center. Enjoy lunch at best available local restaurant.
Transfer back to your hotel at 2:30 pm in Kathmandu Valley.