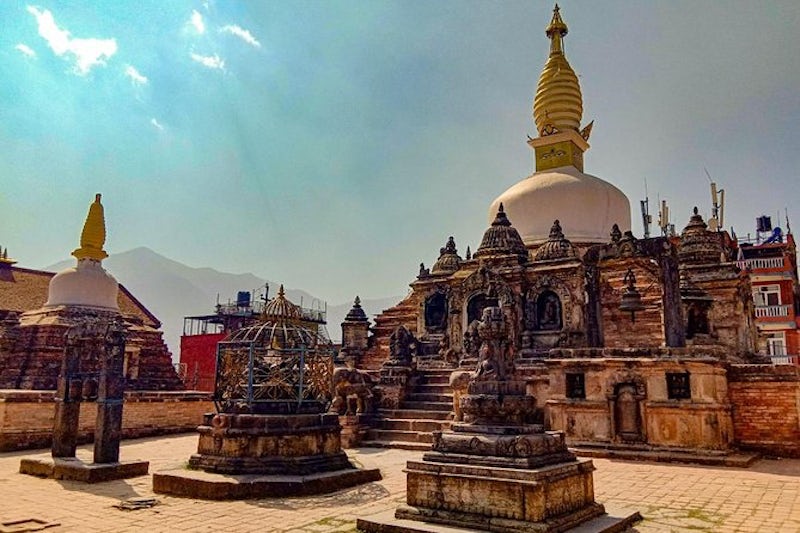 Kirtipur, located on a hill to the southwest of central Kathmandu is one of several ancient kingdoms in the Kathmandu Valley that were once independent, but now make up part of greater Kathmandu

01:30 pm: Your Expert guide picks you up form Hotel Lobby and drive to Kirtipur (about 40 minutes’ drive) and begin Kirtipur sightseeing.
Bagh Bhairab
Bagh Bhairab temple is one of the most popular temples dedicated to the god Bhairab in the form of an angry tiger. This god is regarded as the guardian of Kirtipur and the locals call it Ajudeu, a grandfather god. Bhairab, the most terrifying and awful form of Shiva, is the destroyer on one hand and the guardian on the other.
Chilancho Stupa
A Buddhist shrine is situated on the southern hill. It is located in Kirtipur, Nepal. It was made in the medieval period. An inscription of Nepal Samvat 635 (Licchavi Period) is found in this Chaitya. Therefore, it is one of the most important historical stupas of this region.
Uma Maheshwar
Uma Maheshwar temple (locally, Kwacho Dega) is one of the important heritage sites of Kirtipur. This pagoda-style three-storied temple is situated at the highest point (1414 m) of Kirtipur. Since this temple is at the top of the hill, one can enjoy picturesque view of the Kathmandu valley and mountains like Langtang, Dorge Lakkpa, Chobhu Bhamure, and Gaurishankar.
Shri Kirti Bihar
A Theravada Buddhist monastery built in traditional Thai architectural style, is situated near the entrance to the city. One of the beautiful places of Nepal lies in Chobhar. We can come to this place and can enjoy there with different kind of views. This place is also known as one of historical place of Nepal.
04:00 pm: Enjoy Newari Lunch
05:00 Pm: Day Trip ends and drive back for Hotel.