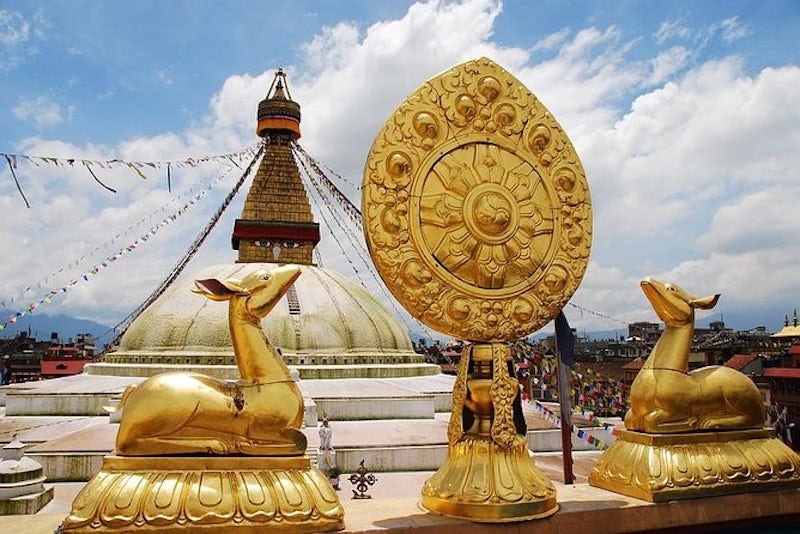 Visit prominent World Heritage sites of Kathmandu on a private 6-hour tour that includes a buffet lunch. You’ll have the benefit of personalized commentary as you explore several Hindu and Buddhist sacred sites

Your expert English speaking tour guide will meet you at your hotel at 10:30 am with their luxurious vehicle to take you for your 6-hour sightseeing tour of Kathmandu Valley, Kathmandu Durbar Square, Swayambhunath, Boudhanath and Pashupatinath.
First, stop at Kathmandu Durbar Square. Listed as a UNESCO World Heritage Site, Kathmadu Durbar Sqaure is one of three Durbar Squares in Kathmandu Valley. Though a few buildings collapsed after the devastating earthquake on April 25th, 2015, you can observe the spectacular art and architecture of the ancient Malla and Shah dynasties. It is also know as Hanuman Dhoka Durbar Square, derived from the statue of Hanuman at the entrance of ancient royal palace.

After that, head to Swayambhunath. Swayambhunath, also know as the "Monkey Temple", is situated on a small hillock on the west of Kathmandu city. It is a sacred place for Buddhist pilgrimages from all over the world. Large eyes painted on the four sides of the main stupa represents wisdom and compassion, and a dome at the base of Sutpa represents the entire world. Swayambhunath also could not escape from the devastating earthquake of April 25th, 2015, but one can still observe the art and architecture at Swayambhunath which is believed to date back to the beginning of 5th century.

Then, head over to Boudhanath Stupa. Boudhanath is located on the northeastern outskirts of Kathmandu, is the largest stupa in the world and is a sacred site for Buddhist pilgrimages. Listed as a UNESCO World Heritage Site in 1979, Boudhanath is on the ancient trade route between Nepal and Tibet. The Stupa is said to entomb the remains of Kassapa Buddha. Founded by Licchivi King, Boudhanath has had minor damage caused by the earthquake on the 25th of April, 2015.

Following your time there, head to Pashupatinath. The sacred Hindu shrine Pashupatinath is located on the bank of the Bagmati river to the eastern side of Kathmandu. Believed to be built by Supuspa Deva, a Licchivi King, Pashupatinath was listed as a UNESCO World Heritage Site in 1979. The main temple of Pashupatinath was built using Pagoda style architecture with four main doors. The two levels of the roof are made of copper with a gold coating and they have a gold pinnacle. The inner sanctorum is the place where the main idol is placed, and the outer sanctorum is an open corridor like space. Though some of the buildings in the Pashupati area are damaged, the main building was untouched by the earthquake of April 25th, 2015 earthquake.
At 5:30 pm, your sightseeing tour ends and your guide drop you off at your Hotel.