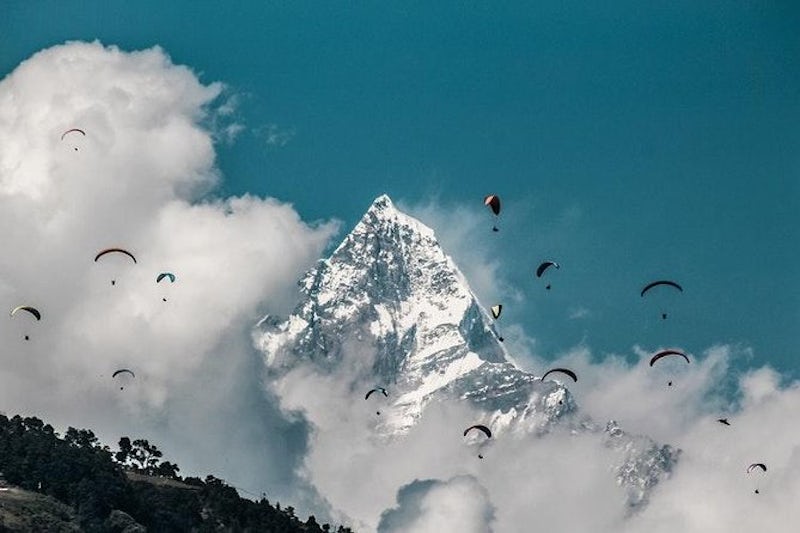 On this private day tour, you will get a great overview of Pokhara, a city of lakes, mountains and natural beauty. It is just a little over 120 miles (198 km) west of Kathmandu, and stretches along the shore of a tranquil lake with bobbing paddle boats.

Your day begins with a pick up from your hotel at 10:30 am, and then you will head to your first stop which is Davi's fall, also known locally as Patale Chhango, which means underworld waterfall. The water flows from the Phewa Lake and travels 1600 feet (500 m) underground into the Gupteshwor Mahadev Cave. A lingam, an abstract representation of the Hindu god, Shiva, is preserved in the cave. It is said to have certain healing powers and be in the same condition since it was first discovered. The cave is divided into two sections. One part of the cave is 130 feet (40 m) in length with natural tunnels and the lingam. The second part begins after this shrine and leads to the falls.
You would also visit Peace Pagoda, a monument to inspire peace, designed to provide a focus for people of all races and creeds, and to help unite them in their search for world peace. Most (though not all) peace pagodas built since World War II have been built under the guidance of Nichidatsu Fujii (1885–1985), a Buddhist monk from Japan and founder of the Nipponzan-Myōhōji Buddhist Order. Fujii was greatly inspired by his meeting with Mahatma Gandhi in 1931 and decided to devote his life to promoting non-violence. In 1947, he began constructing Peace Pagodas as shrines to world peace.
You will go to the International Mountain Museum. It contains a collection of mountaineering equipment used by mountain climbers from around the world. It is a museum about mountaineering and its history, and offers examples of the people living in the Himalayas and descriptions of the 14 highest peaks and their most famous expeditions. It also features cultural items of different ethnic groups in Nepal. You will be brought back to your hotel at 4:30 pm approximately.