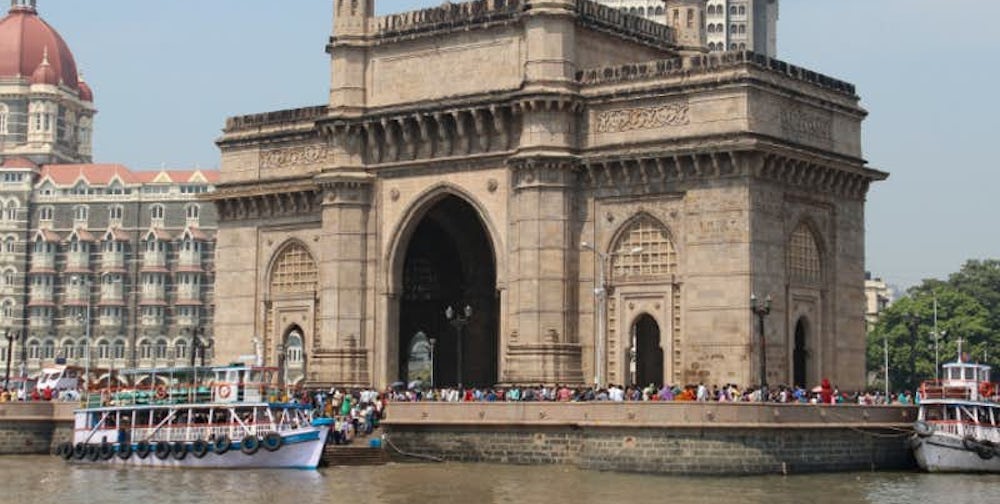 Mumbai - off the beaten track

Come and explore some of the tourist places in Mumbai that are worth visiting.Mumbai is what the Indians affectionately call - the 'City of Dreams'. This fabulous city is not only the financial capital of India that serves as the center of all trade and investments, but also a cultural center. 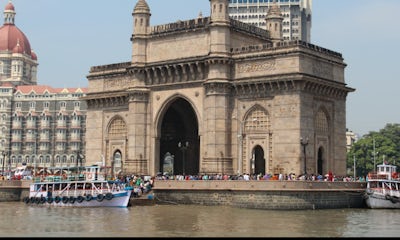 Place
Gateway Of India Mumbai
Clifford:The Gateway of India is one of India's most unique landmarks situated in the city of Mumbai. The colossal structure was constructed in 1824. Located at the tip of Apollo Bunder, the gateway overlooks the Mumbai harbor, bordered by the Arabian Sea in the Colaba district. The 'Gateway of India' situated in Colaba is a renowned monument built in the Hindu-Muslim styles of architecture to honor King George V and Queen Mary.
more 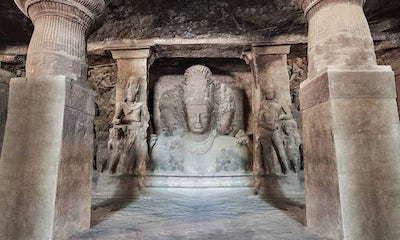 Place
Elephanta Caves
Clifford:Elephanta Caves are a UNESCO World Heritage Site and a collection of cave temples predominantly dedicated to the Hindu god Shiva.They are located on Elephanta Island, or Gharapuri (literally "the city of caves") in Mumbai Harbour, 10 kilometres (6.2 mi) to the east of the city of Mumbai in the Indian state of Mahārāshtra. The island, located offshore about 2 kilometres (1.2 mi) west of the Jawaharlal Nehru Port, consists of five Hindu caves and a few Buddhist stupa mounds that date back to the 2nd century BCE,as well as a small group of two Buddhist caves with water tanks.
more 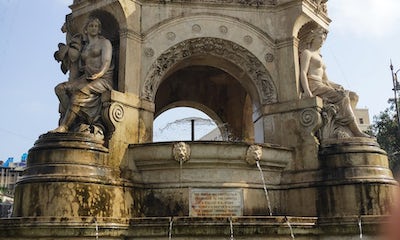 Place
Flora Fountain
Clifford:Flora Fountain, at the Hutatma Chowk (Martyr's Square), is an ornamentally and exquisitely sculpted architectural heritage monument located at the southern end of the historic Dadabhai Naoroji Road, called the Mile Long Road, at the Fort business district in the heart of South Mumbai, Mumbai, India. Flora Fountain, built in 1864, is a fusion of water, architecture and sculpture, and depicts the Roman goddess Flora. It was built at a total cost of Rs. 47,000, or 9000 pounds sterling, a large sum in those days.
more 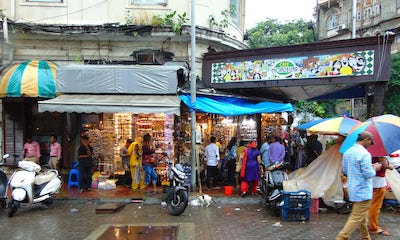 Place
Colaba Causeway Market
Clifford:Colaba Causeway, officially known as Shahid Bhagat Singh Road, is a commercial street, and a major causeway or land link between Colaba and the Old Woman's Island in the city of Mumbai, India.
more 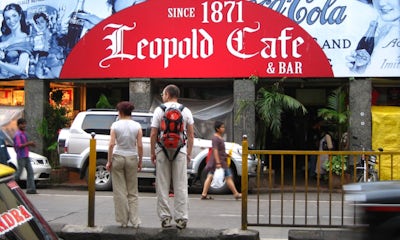 Place
Leopold Cafe
Clifford:If you are in Colaba and looking for a place to chill, stop and pay a visit to the good old Leopold café . It’s legendary. It will always stay so!
more 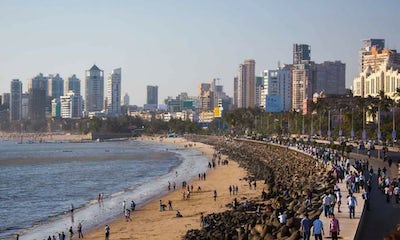 Place
Girgaum Chowpatty
Clifford:Girgaum Chowpatty is a small sandy beach and a good place to chill, at the north end of Marine Drive, a must-go place for tourists visiting Marine Drive for the first time. Conveniently located next to Charni Road railway station, the beach is very crowded during evening hours and weekends and hosts street food stalls serving local delicacies. There are cafes/dine-in options available across the road as well.
more 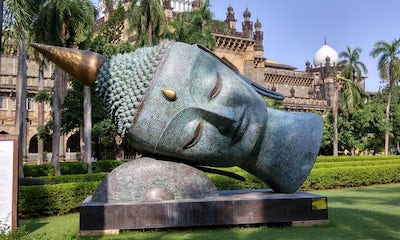 Place
Chhatrapati Shivaji Maharaj Vastu Sangrahalaya
Clifford:The Prince of Wales Museum is a splendid structure situated in Mumbai and is regarded to be one of the heritage buildings of the city. The foundation stone of this edifice was laid down by the Prince of Wales on the 11 November 1905, and it was established as a museum on 10 January 1922. The facade of the museum is a sight to behold in itself and sits in the midst of an expansive green garden. Adorned with stunning stone and lattice work, the architecture of the Prince of Wales Museum is a blend of Indian, Mughal and British engineering styles. Inside, the museum holds almost 50,000 of some of the most exquisite artefacts relating to the rich and diverse history of India. Now known as 'Chhatrapati Shivaji Maharaj Vastu Sangrahalay', The Prince of Wales Museum is a Grade I Heritage Building of the city and is counted amongst one of the most prominent museums of India. The complex exhibits a myriad collection of ancient artefacts, artwork and sculptors of the country which give a unique insight into our past.
more 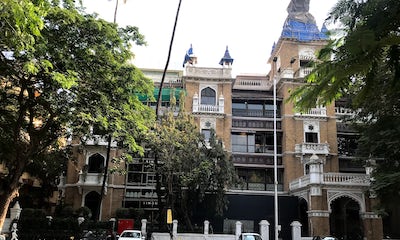 Place
National Gallery of Modern Art
Clifford:A paradise for art lovers, National Gallery of Modern Art (NGMA), Mumbai is a famous art museum possessing a magnificent collection of paintings, sculptures and artefacts since 1996. The multitude of artwork present in this charismatic gallery has drawn millions of visitors and left them awestruck. It is governed by the Department of Culture, Government of India and has over the period become a popular tourist attraction as it very convincingly depicts the modification of artwork in the field of visual and plastic arts. A blend of art and culture, this gallery houses the artworks of phenomenal sculptors, artists and painters including the legendary Pablo Picasso who is considered as the epitome of art and painting. The oldest artwork is known to be around 160 years old. The ancient artefacts such as statues and mummies from Egypt have also a played a crucial role in rousing the curiosity of the visitors. The National Gallery of Modern Art also organises various art exhibitions which provide an intriguing platform to both the artists and the art lovers as the artists get a remarkable opportunity to showcase their talent while the art lovers can explore and quench their thirst for art. The gallery is located near Regal Cinemas in Colaba, South Mumbai. It showcases some of the oldest artworks, dating back to 1857 and is considered one of the best in India.
more 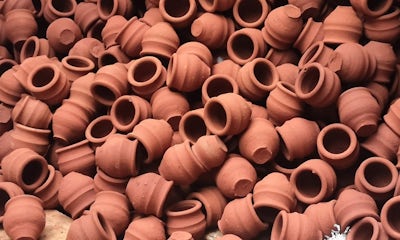 Place
Dharavi
Clifford:Dharavi in Mumbai is the largest slum in India, second to Orangi Township in Karachi, which is the largest slum in Asia and forth to the largest slum in the world in Mexico. With an area of mere 2.1 km square, Dharavi is a hub for several commercial activities and home to a whopping population of 700,000 to 10,00,000. However, it is not because of the slum's extreme poverty that the place has got recognition all over the world. People over at Dharavi work tirelessly to make sure the city of Mumbai functions effectively. If you were to remove Dharavi from Mumbai, the city would completely collapse. And why would it not? Dharavi houses lanes and lanes of commercial units like waste segregation, fabric dyeing, leather production, and many more. To give you a perspective, there are about 15,000 single room factories and 7000 industries, all in an area of just over 2 km square.
more 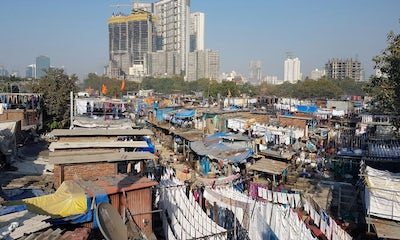 Place
Dhobi Ghat
Clifford:This 140-year-old dhobi ghat (place where clothes are washed) is Mumbai’s biggest human-powered washing machine: every day hundreds of people beat the dirt out of thousands of kilograms of soiled Mumbai clothes and linen in 1026 open-air troughs. The best view is from the bridge across the railway tracks near Mahalaxmi train station.
more

Gift from Clifford. Get a discount off all experiences!