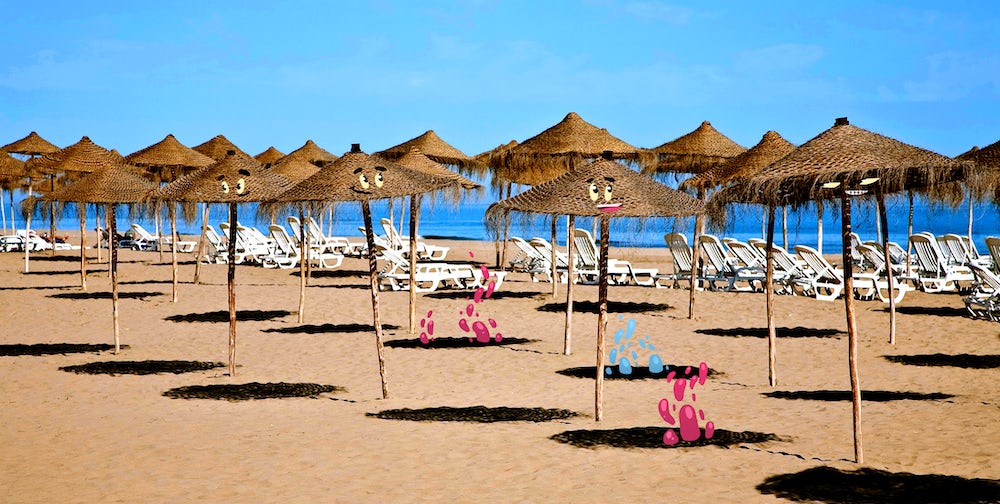 The Best Season to Visit Morocco

With its coastline, desert, mountains and countryside the exotic and diverse country of Morocco is a year-round destination. Whether you want to ski down pristine pistes, cool off in the Mediterranean Sea or trek through the Sahara Desert on the back of a camel, the best time to go to Morocco depends entirely on what you want to do when you arrive and where you want to stay.

Summer in Morocco (June to August) 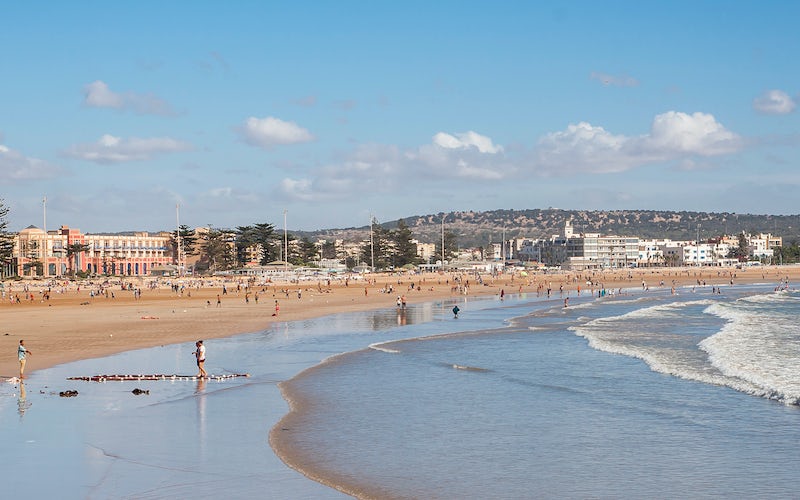 People cooling down at the beach in Essaouira. Canva/LUKASZ-NOWAK1. 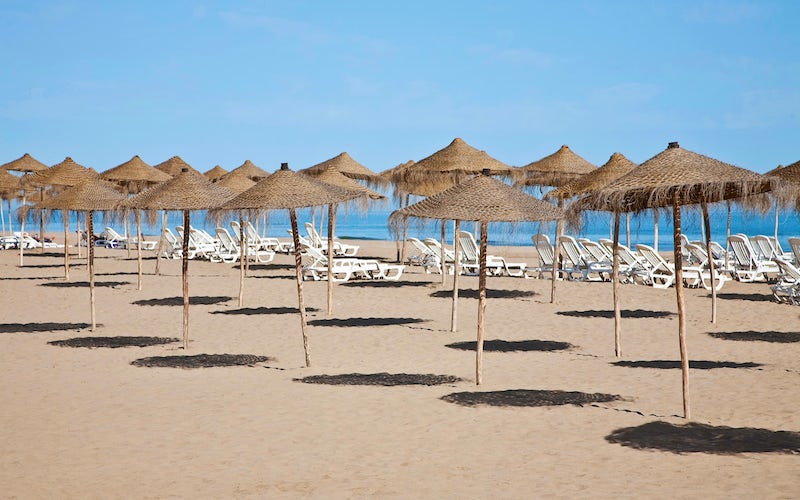 You can escape the heat with a beach holiday in Morocco. Canva/stocktributor.

Moroccan summers are super-hot with searing temperatures in places like Fez, Marrakech and southwest regions that are close to the desert.

If hot and dry is not for you then summer would not be an ideal time to travel. However, even though the temperatures are at their highest, you can escape the heat with a beach holiday in one of the country's coastal destinations or visit cooler places in the Atlas Mountains.

This is easily the most popular time of the year for tourists so book early to ensure you get your first choice of Morocco holiday accommodation.

Autumn in Morocco (September to November) 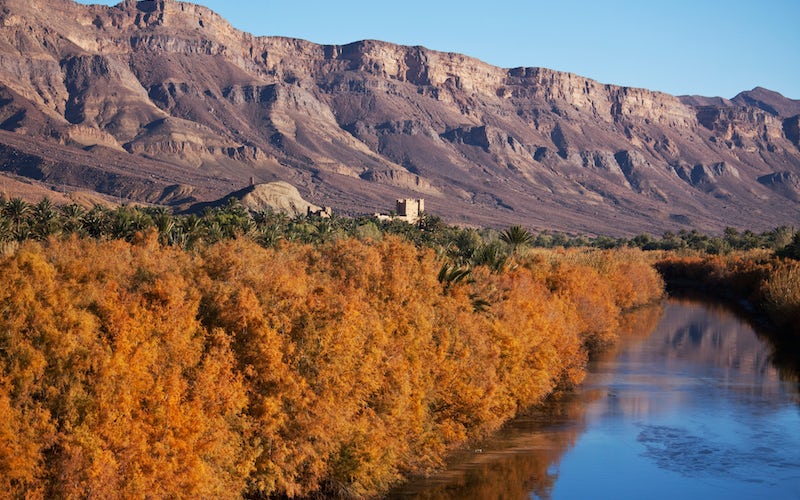 The temperatures during the start of August can be just as fierce as the those during the height of summer, especially in towns and cities away from the coasts. However, the thermometer soon starts to fall and for the rest of the season, you can expect pleasant, temperate conditions.

If you really don’t like the summer sun then autumn is probably the season for you to visit Morocco. Don’t expect the weather to be constant though as you may well experience a mixture of hot days, cool days and some rainy days.

Due to the cooler weather, this is still a very popular time for tourists. Therefore, some of the major attractions in the big cities will be crowded, although there will be fewer children because they’ll be back at school. Nonetheless, take advantage of the wonderful opportunities to dive into the country's culture and history in the museums and ancient sites.

For example, this would be a golden time to explore the medinas of Marrakech or Fez, untroubled by sweltering summer heat. Wander along ancient and narrow streets and into lively and colourful souks. If you’re planning a hike in the mountains, it’s a good idea to save it for this season.

Winter in Morocco (December to February) 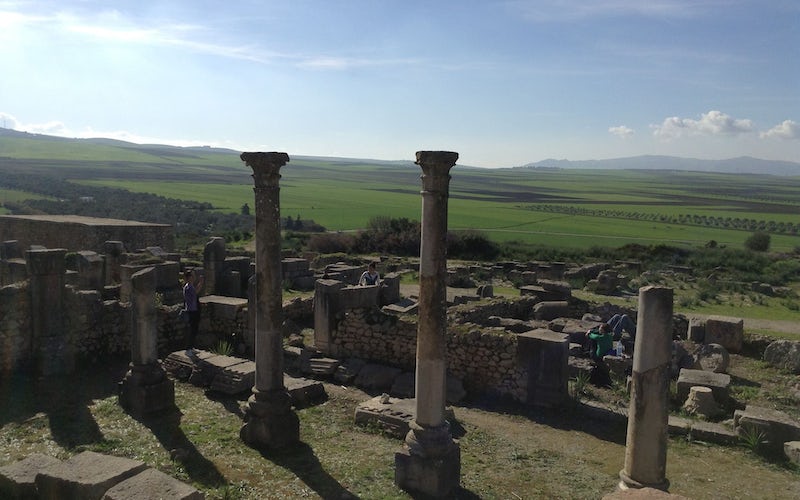 Even during the winter, the weather is very friendly in Morocco. Sure there is a little more rain than in the summer months but overall it’s mild. That being said, the temperatures can drop significantly at night, especially in and around the desert so you will need to bring some warm weather clothing with you.

If your intention is to return home with a deep tan from sunbathing on the beach, this may not be the best time to come. However, if you’re into hiking amid gorgeous scenery without melting under a blazing sun then December, January and February are ideal months. 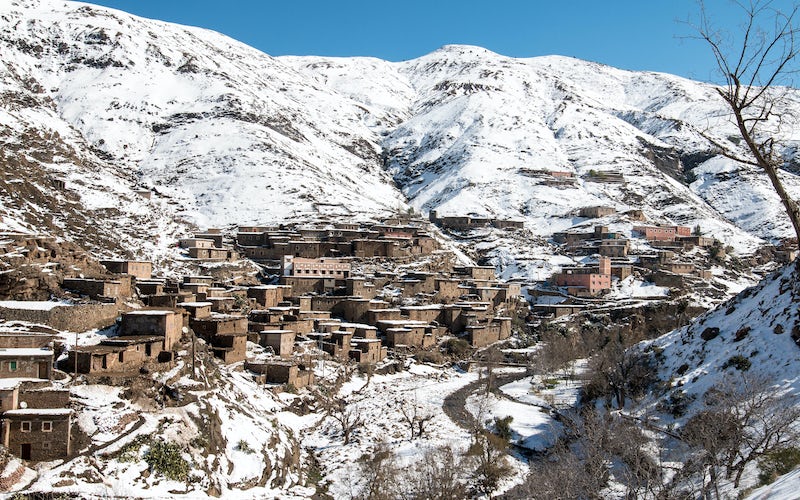 A Berber village in the Atlas mountains. Canva/evenfh.

At higher elevations, you will find plenty of snow and skiing is a popular activity especially in the High Atlas Mountains. While many people don’t think of African countries as skiing destinations the slopes of Morocco have been challenging skiers of all abilities for years. Typically, the season lasts from December until March/April and like all ski destinations, conditions vary depending on temperatures and snowfall. Among the top skiing destinations are:

Spring in Morocco (March to May)

Many visitors choose to come to Morocco during spring when the weather is warm and dry.

The beaches along the Mediterranean and Atlantic coasts are also a good bet for this time of year, and you'll be able to take advantage of long, lazy hours under the sun. Spring is also a perfect time for picturesque hikes especially through the countryside which blooms with an abundance of colourful flowers. 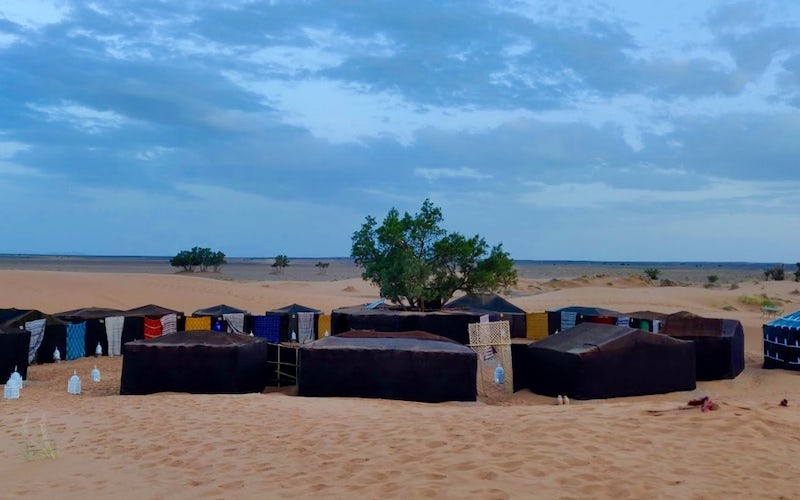 May is usually warm and dry. Wonderguide/Þórey.

If you're into grabbing a bargain, you may be able to secure deals on travel tickets and hotel rates as the high season has yet to kick in.

Best Time to Come For Festivals

For culture lovers and those who relish a good party, the best season to visit Morocco will be where you coincide your trip with fiestas and festivals. There are many to choose from, and they include religious, music and sporting events. Among the key dates for your diary are:

May: The Kelaa-des-Mgouna Rose Festival. The Dades Valley is also known as the Valley of the Roses for its annual bumper crop of roses. The fragrant flower is celebrated each year with a three-day festival in the town of Kelaa-des-Mgouna.

June: The Fez Festival of World Sacred Music. A nine-day programme of open-air concerts in such beautiful venues as the Jnan Sbil Gardens and the parade ground in front of the Royal Palace.

Essaouira Gnaoua and World Music Festival. An eclectic music and culture festival celebrating gnaoua music, which originated in the sub-Saharan region. It combines ritual poetry with traditional music and dancing. Concerts are held in open-air venues dotted around the coastal city of Essaouira.

July: Marrakesh Popular Arts Festival - a cultural extravaganza that attracts dancers, musicians, snake charmers, fortune tellers and entertainers from all over the country and the rest of the world.  Locations include Djemaa el-Fnaa square and the 16th-century El Badi Palace.​

The ninth month of the Muslim calendar: Ramadan - the dates vary every year, but it starts with the sighting of the crescent moon.  Ramadan is a sober month when Muslims must fast from sunrise to sunset. However, the end of this month of abstinence, prayer and reflection is marked with the Eid al-Fitr festival which lasts for several days.

August: Eid al-Adha - an important religious festival that honours how Ibrahim (also known as Abraham) was willing to sacrifice his son as an act of obedience to Allah (God).

August/September: Imilchil Marriage Festival - an annual event that takes place in the village of Imilchil, located in the Middle Atlas Mountains. In days gone by single men and women from nearby tribes would wear their finest clothes and head to Imilchil to find their life partner at the wedding festival. Nowadays, many of the couples already know each other and turn up to secure a marriage licence and to enjoy a good party. However, it still provides an opportunity for singletons to seek out potential partners.

October: Erfoud Date Festival - a three-day food festival  which includes a dromedary race and fashion parade in Erfoud, an oasis town in the Sahara Desert.

December: Tan Tan Moussem - an inter-tribal festival involving more than 30 tribes from southwestern Morocco and other parts of Africa who gather to dance, tell stories, worship and participate in camel races. This exciting cultural event takes place in the town of Tan-Tan.

There is no one best season to visit Morocco. Whatever time of year you decide to come you will discover friendly and welcoming locals, rich cultural experiences, gorgeous scenery and lots of sunshine.

Things to do in Morocco
Wonderguide