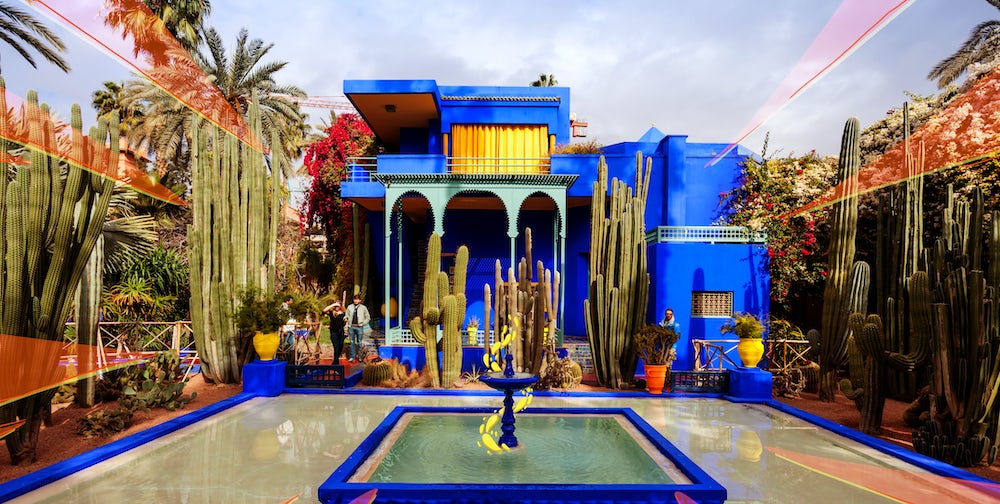 8 Amazing Things to Do in Marrakech

Founded almost one thousand years ago, Marrakech is an ancient city that dazzles with its souks, palaces, mosques and medina. This ageless place of red ochre buildings sitting on the edge of the Sahara Desert is alive with a rich history and cultural adventures.

From discovering narrow alleyways lined with artisan workshops and haggling in souks to visiting centuries-old palaces and watching street entertainers, there is much to see and do in one of the major cities in Morocco. Here are our top eight picks.

1. Wander Through the Medina 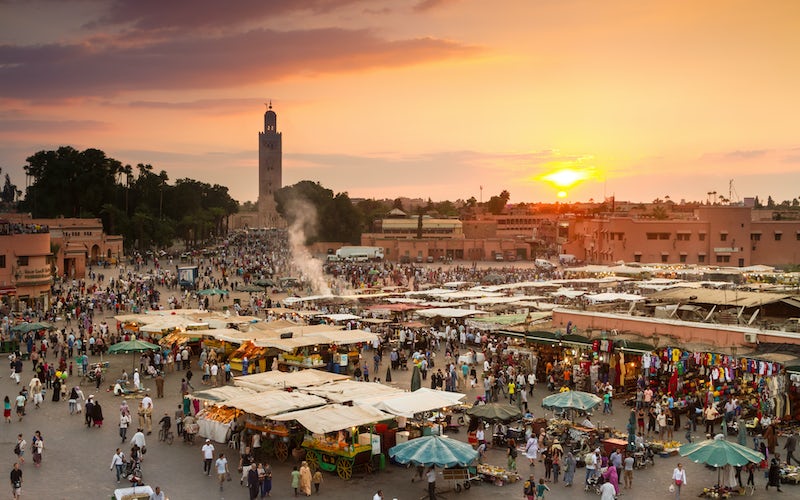 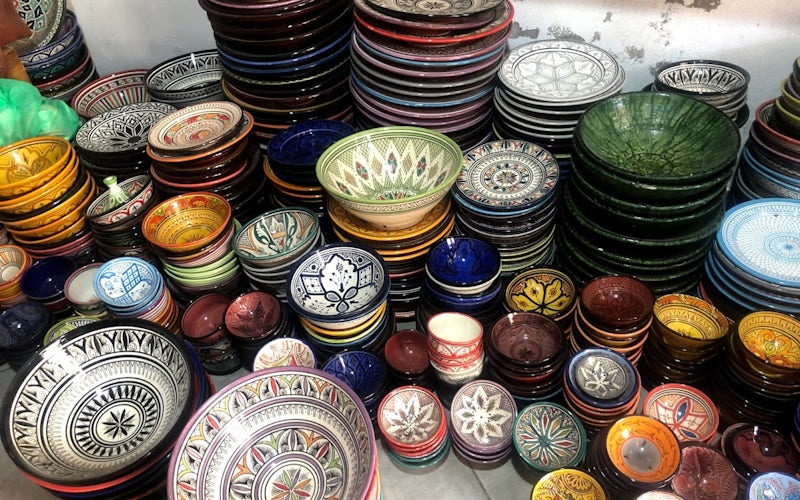 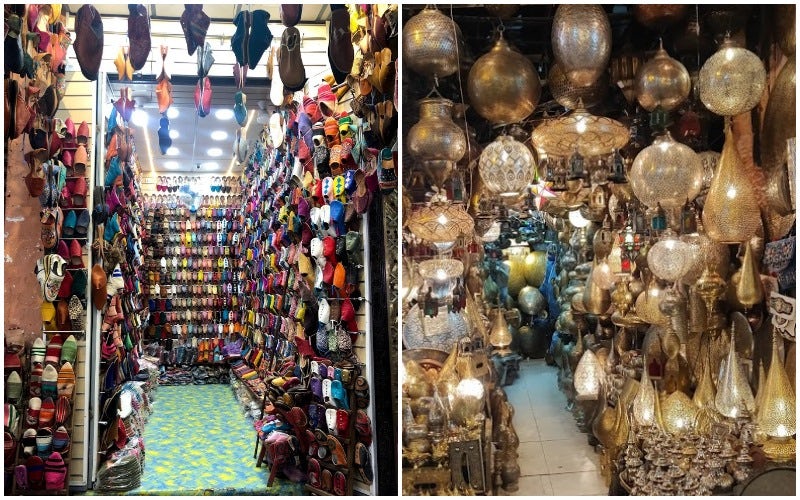 The labyrinthine medina, or old quarter is Marrakech’s biggest calling card, an ancient walled enclave of narrow streets and souks that are sensory wonderlands filled with exotic sights, sounds and smells. Fragrances of African spices and orange blossoms waft through the air while residents and tourists dash through busy lanes and alleyways of this UNESCO world heritage site.

Appreciate the beauty of the Moroccan architecture, the main feature of which is the keyhole arch. Visit landmark buildings including Bahia Palace and Koutoubia Mosque and walk by the 12th-century walls which stretch around the medina. See ancient and modern modes of transport move through the streets including push-carts, donkey carts and mopeds. Find a quiet courtyard and relax under the shade of a lemon tree.

Spend some time in Djemaa El Fna in the heart of the medina. This is Marrakech’s main square and a pulsating hive of activity. Explore the traditional Arab markets, or souks for spices, antiques, wools, silks, olives and much more. While you are there practice your haggling skills to grab fantastic bargains.

2. Make Yourself at Home at Bahia Palace 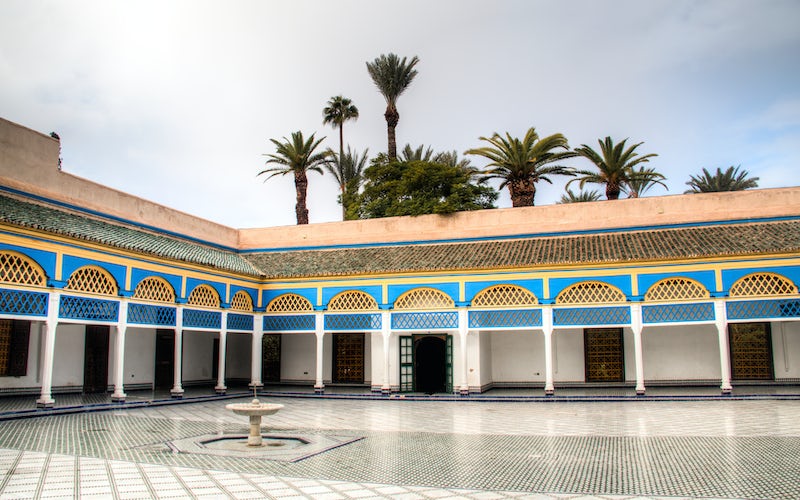 Inside the Bahia Palace. Canva/Nicolasdecorte. 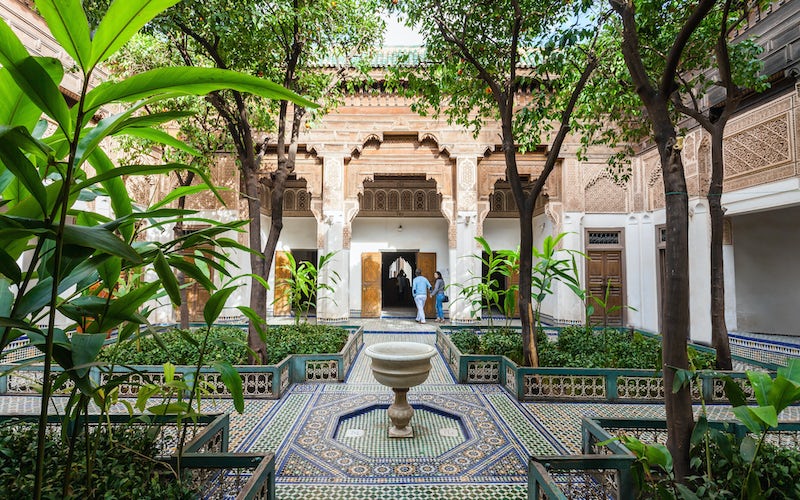 Bahia Palace is one of Marrakech's architectural jewels, a beautiful 19th-century building spread across eight acres. It was built for a former slave who climbed up the ranks to become Grand Vizier of the Sultan. His lofty intention was for the vast construction to be the greatest palace of its time.

Inside are around 150 rooms, including a harem but all are bare because they were ransacked after the vizier died in 1900. Nonetheless, this palatial structure is well worth a visit for the richness of its décor, a mixture of Moorish and Andalusian design features. 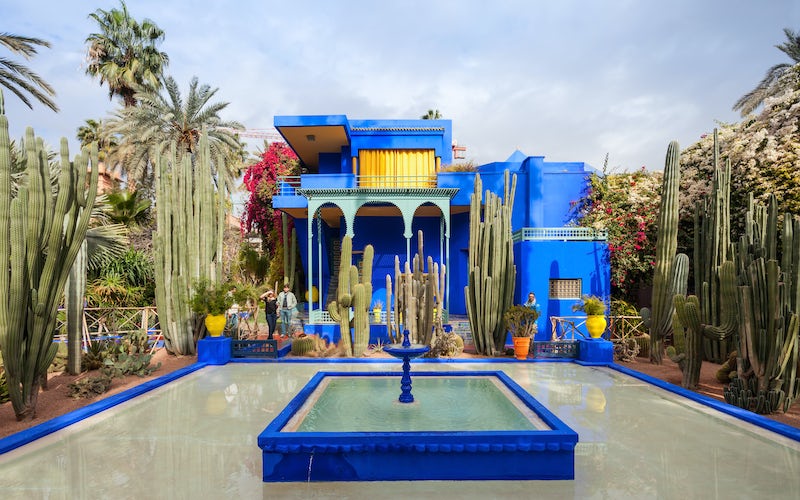 Revel in this colourful and scented botanical oasis, a two and a half acre site filled with exotic plants, cacti, shaded lanes and bubbling streams and pools. This pastoral paradise was created by French painter Jacques Majorelle over a period of forty years and among the many highlights is the Berber Museum, a blue Art Deco building dedicated to the Berber culture from North Africa.

Following Majorelle’s death in 1962, designer Yves Saint Laurent bought the property. Upon his death in 2008, his ashes were scattered in the garden. See the monument to the French fashion designer which includes a Roman column from his home in Tangier.  During your meanderings through the gardens try and spot some of the birds that thrive here including robins, warblers, turtledoves and grey wagtails.

4. Venture into the Saadian Tombs 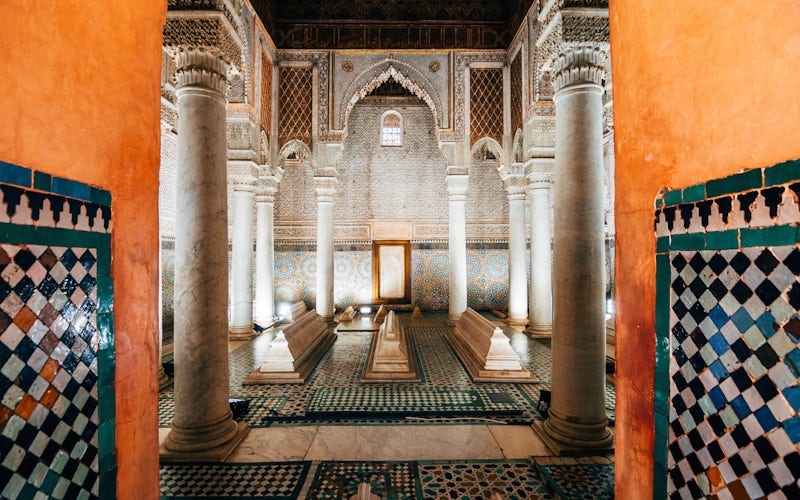 Clearly, money was no object when it came to constructing the Saadian Tombs, a magnificent mausoleum complex lavishly decorated with tiles and finely-worked stucco. This is the final resting place of members of the Saadi dynasty who ruled in the 16th and 17th centuries.

The tombs first opened to the public in 1917 after being hidden for years. Go on a guided or self-guided tour and be sure to enter the Chamber of the 12 Pillars, the main mausoleum. With imported Italian marble and plasterwork gilded with gold, it is the most lavish building here.

Inside is the tomb of Sultan Ahmed El Mansour who was responsible for many of the decorative embellishments within this royal necropolis. Between them, the compound’s two mausoleums house more than 60 tombs while others are dotted around the courtyard and garden. 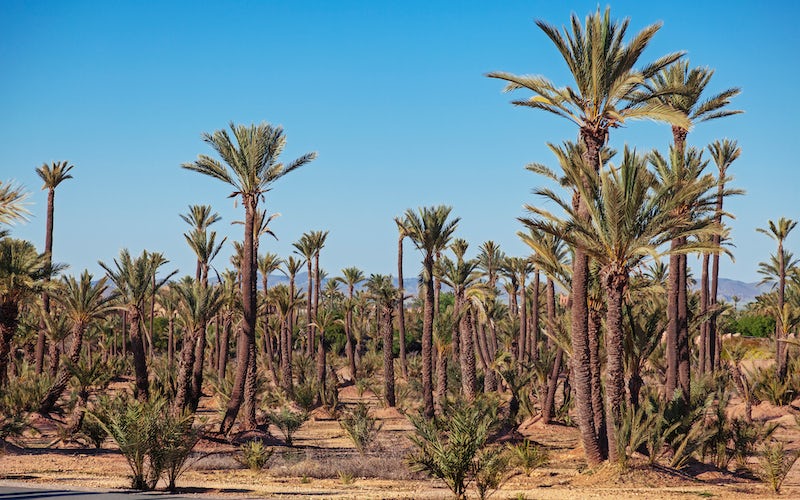 Covering approximately 13,000 lush hectares that encompass more than 100,000 palm trees, Palm Grove is the green lungs of the “Red City”. For centuries, the city's residents have been coming here to recharge their batteries amid natural splendour.  According to legend, the grove's origins lie in the 12th century when it was a military camp. After eating dates soldiers discarded the pits which fell into holes created by lances.

Enjoy a long and leisurely stroll under the shade of tall palms that stand beneath the towering peaks of the Atlas Mountains. If you want to up the pace a little, embark on a sunset camel ride or experience the thrill of riding a quad bike through desert landscapes. Alternatively, travel through the green surrounds in a horse-drawn carriage.

In addition to its tall trees, Palm Grove is also home to upmarket hotels, expansive villas and golf courses.

6. Shop, Dine and Be Entertained at Djemaa el-Fnaa 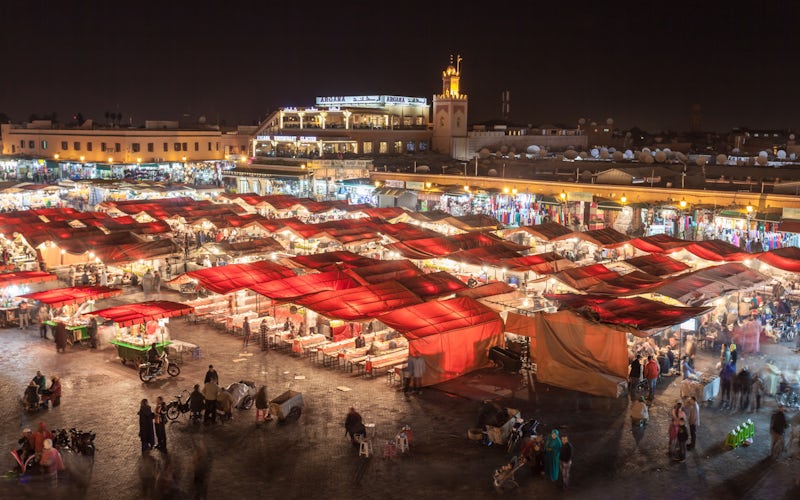 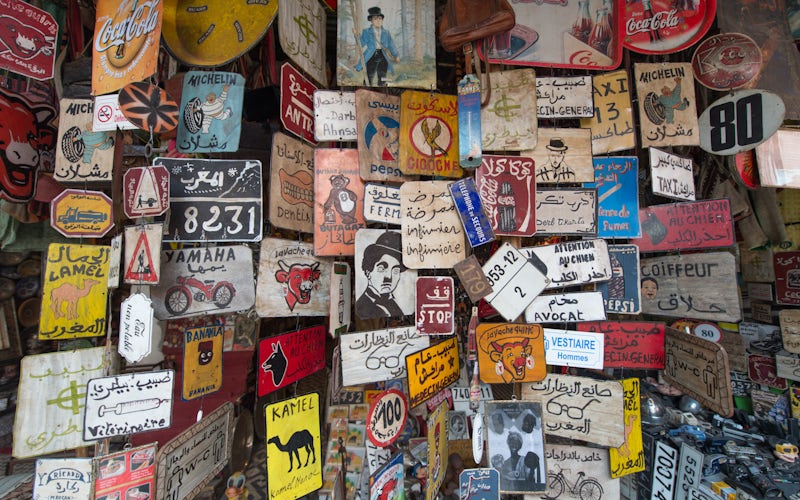 Djemaa el-Fnaa is one of those places you will keep coming back to time and again. This is Marrakech's main square, a vast open space in the medina where there is always something to see and do from early morning until late at night. What you can expect to encounter depends entirely on the time of day you visit.

By day, the main activity is in the marketplace which is occupied by stalls selling orange juice and water sellers with their traditional water bags. Meanwhile, snake charmers appear to hypnotise cobras with their flute playing, and medicine men peddle their wares.

As the sun starts to fade, the square really comes to life with magicians, storytellers, acrobats, musicians, belly dance fire-eaters and artists. Later, the food stalls fire up their grills and entice with the delicious aromas of inexpensive Moroccan street food such as grilled meat, potato cakes and spicy North African merguez sausages.

One of the best things to at Djemaa el-Fnaa is to sit in a café sipping mint tea while soaking up the lively and colourful ambiance.

7. Discover Centuries-Old Art and Artefacts at the Marrakech Museum 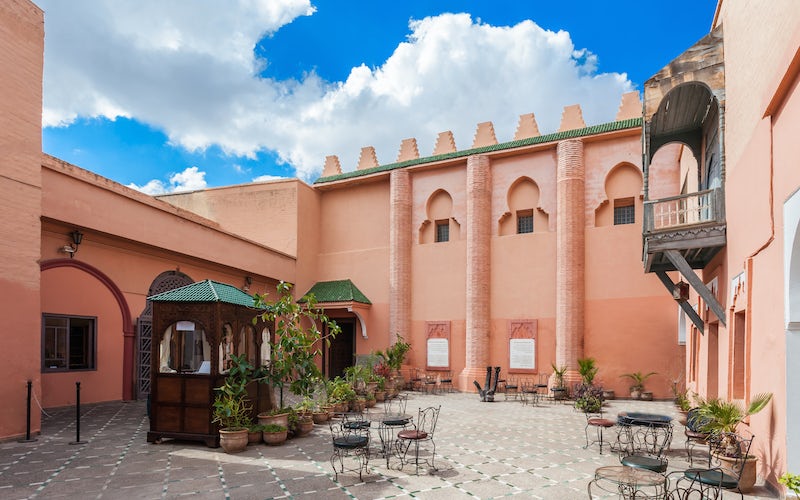 Behind the walls of the 19th-century Dar Menebhi Palace are rooms filled with a rich collection of archaeological pieces, contemporary artworks, historical documents and ethnographic objects. This is the Marrakech Museum, a showcase of extraordinary treasures that provide insights into the history of Morocco.

Browse gorgeous ceramics from the 18th to the 20th centuries and look at the calligraphy collection which includes pieces from as far back as the ninth century. View costumes and traditional weapons such as guns, swords and a koummya, a dagger with a curved blade. Go into the building's old kitchens for contemporary art exhibitions. On show are pieces by Moroccan and Orientalist artists. Among the other highlights of the museum are silver jewellery set with precious or semi-precious stones and coins from the eighth, ninth and tenth centuries.

While you are at the museum, take a few moments to appreciate the architecture of this grand building, once the home of one of the country's defence ministers. An attractive highlight is the Andalusian-style inner courtyard with its colourful tiles, fountains, ornamental pillars and chandelier.

8. Marvel at the 12th-Century Koutoubia Mosque 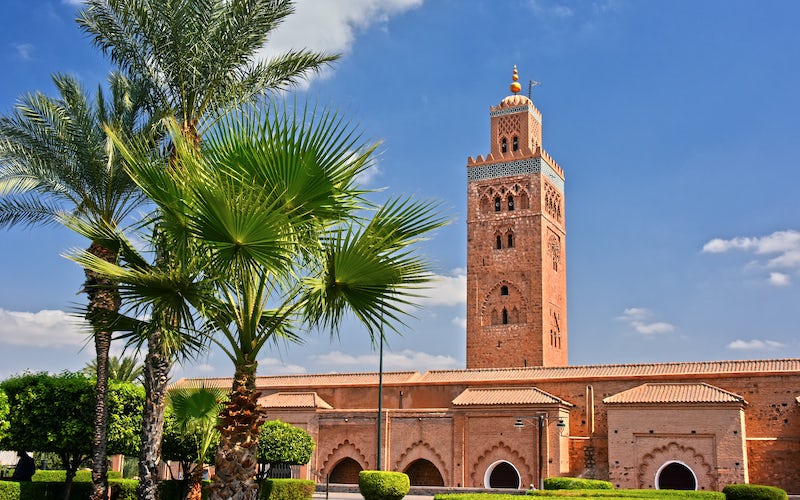 Koutoubia Mosque is the largest mosque in Marrakech and stuns with its decorative arches and the ornamentation of the minaret, a 70-metre tower that dominates the medina's skyline. This beautiful sandstone structure bears a close resemblance to the bell tower of Seville Cathedral in Spain and is topped by a spire and copper orbs.

Koutoubia Mosque is also known as the mosque of booksellers because it was constructed in the souk of manuscript merchants.  Non-Muslims are not permitted to enter this important place of worship, but its architecture can be enjoyed from the nearby Djemaa el-Fnaa square and other surroundings.