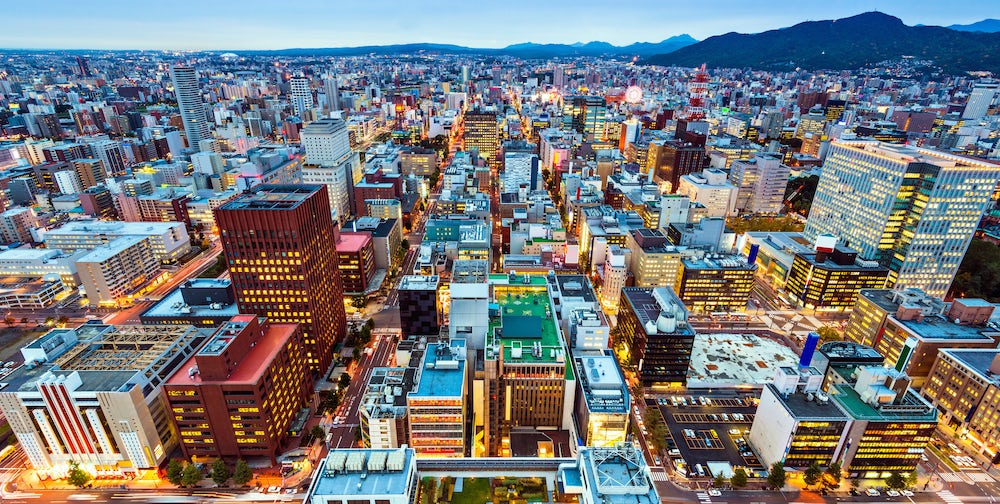 A Guide to the Major Cities of Japan

Ancient traditions and temples, dynamic modern cities hurtling into the future and awe-inspiring scenery spread across an archipelago of thousands of islands, Japan is an endlessly fascinating country. If you’re planning a trip to the Land of the Rising Sun but don’t know which of the amazing destinations to choose from, let our guide to the country’s major cities help you decide what to include on your itinerary.

Tokyo is Japan's modern high-tech capital, a bustling metropolis of more than 12 million people that is the political, financial and cultural hub of the country.

It is a place of looming modernist skyscrapers and traditional wooden houses, frenetic highways and tranquil backstreets, and hectic and crowded entertainment districts that rub shoulders with shrines and temples of great beauty and serenity. Thanks to an efficient and extensive public transport network it is easy to get around Tokyo and visit some of its top attractions. Among them are:

The Imperial Palace – the official residence of Japan's Imperial Family. While the public cannot enter the building, there are guided tours of the palace grounds. 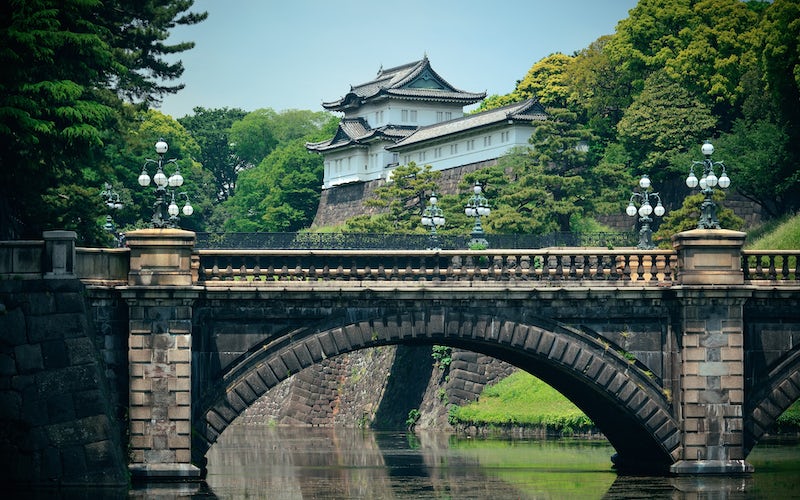 The Sensō-ji Temple – a large ancient Buddhist temple with a history that stretches back to the seventh century.

Ueno Park and Zoo – an expansive green space that encompasses temples, shrines and the oldest zoo in Japan. 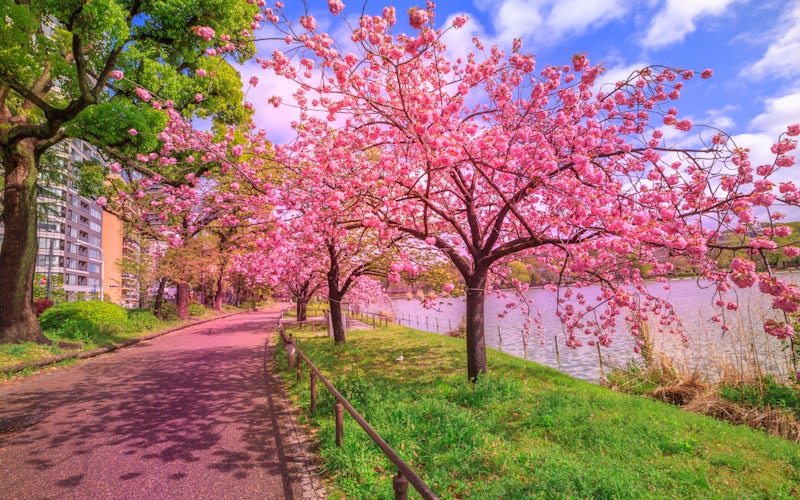 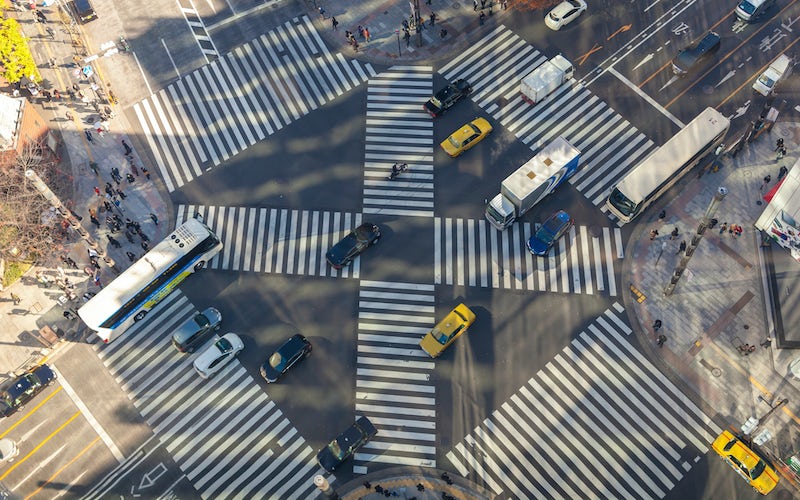 The Tokyo Skytree – this television broadcasting tower is the world's tallest tower, soaring 634 metres into the sky. Take the elevator up to the observation decks which are located at 350 metres and 450 metres above the ground. There is also a restaurant and café. 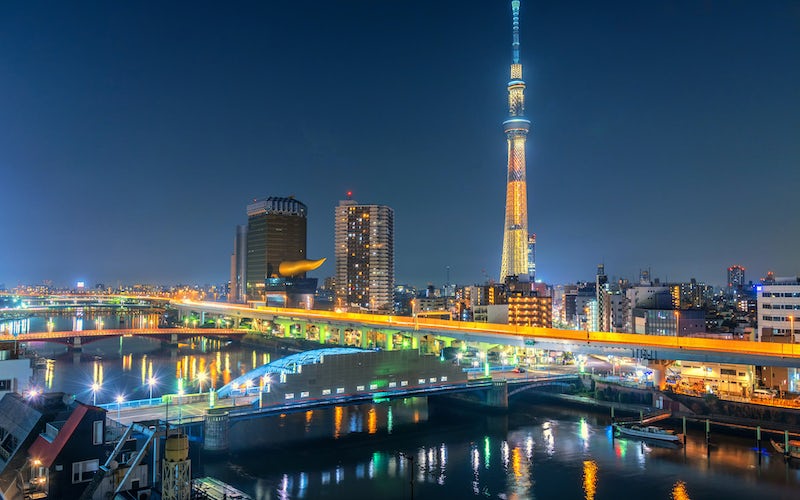 Ancient Buddhist temples, majestic palaces, ornate shrines, gardens and bamboo forests are just some of Kyoto's many charms. This is one of Japan's largest cities and for more than one thousand years served as the country's capital.

Although targeted for an atomic bomb in World War II, the city was saved from attack thanks to US Secretary of War Henry Stimson. He persuaded President Truman to remove it from the list of targets owing to Kyoto's cultural importance. Consequently, beautiful centuries-old architecture abounds. Highlights of a visit to Kyoto include:

The Golden Pavilion – a striking-looking Zen Buddhist temple with a gold leaf coating that appears to float over a pond. 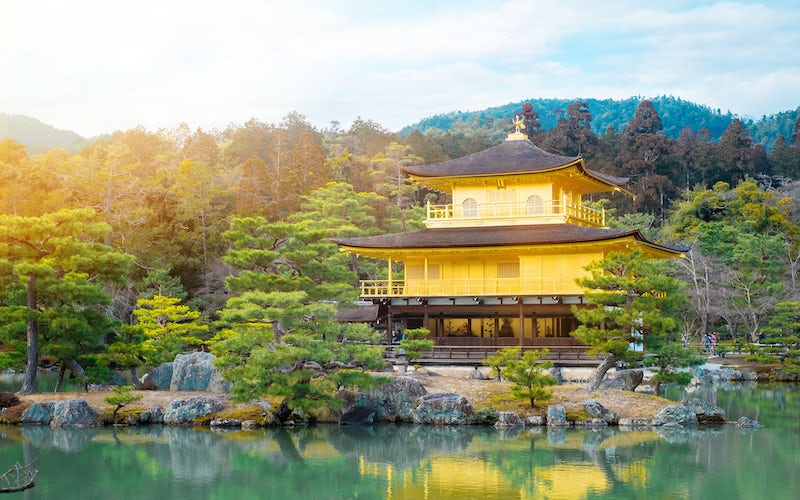 Nishiki Market – search for culinary delights such as sushi, pickles and dried seafood at this downtown fresh food market, a long covered shopping street lined by stalls and shops. 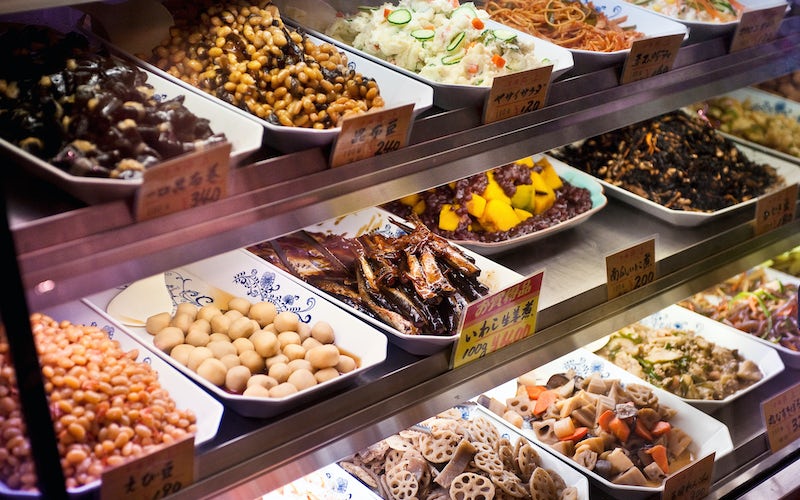 At the Nishiki Market. Canva/gyro.

Fushimi Inari-taisha Shrine – a shrine complex that dates back to the eighth century and was dedicated to the goddess of rice-growing. Highlights include a long avenue lined by thousands of bright orange torii or traditional Japanese gates. 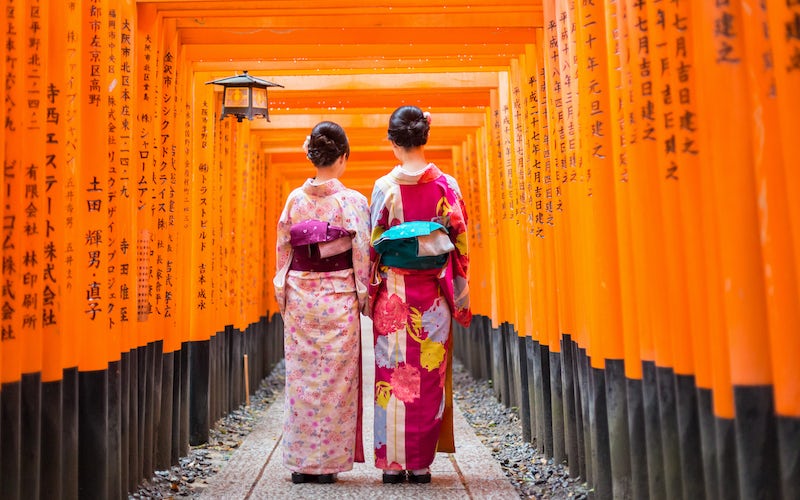 The third largest city in Japan after Tokyo and Yokohama, Osaka is a vast and vibrant destination of traditional temples, picturesque parks, entertainment districts, and the tallest building in the country.

It is also one of Japan's great culinary destinations with a lively restaurant scene, great street food and plenty of popular local specialties. There are many reasons Osaka should be on your radar. They include:

Osaka Castle – one of the country's most iconic buildings is a five-story 16th-century structure that was built for Toyotomi Hideyoshi, a powerful warrior and politician. 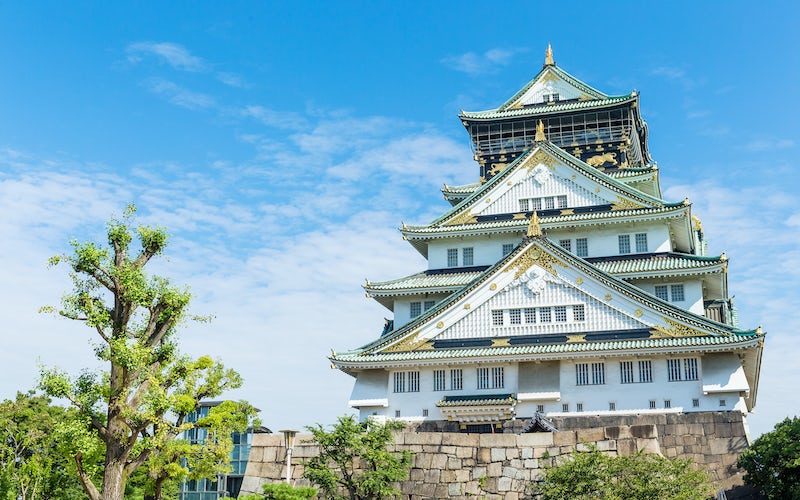 Universal Studios – shows, rides and plenty of attractions such as The Wizarding World of Harry Potter at this colossal theme park.

Shitennō-ji Temple – an ancient Buddhist temple founded in the sixth century that's often claimed to be the oldest temple in the country,

Abeno Haruki’s – standing at 300 metres tall this is the tallest building in the country. Inside the skyscraper is an art museum, hotel, offices and an observation deck.

Osaka Aquarium Kaiyukan – get close to sharks, rays, jellyfish and many other fascinating underwater creatures at one of the largest aquariums in the world. 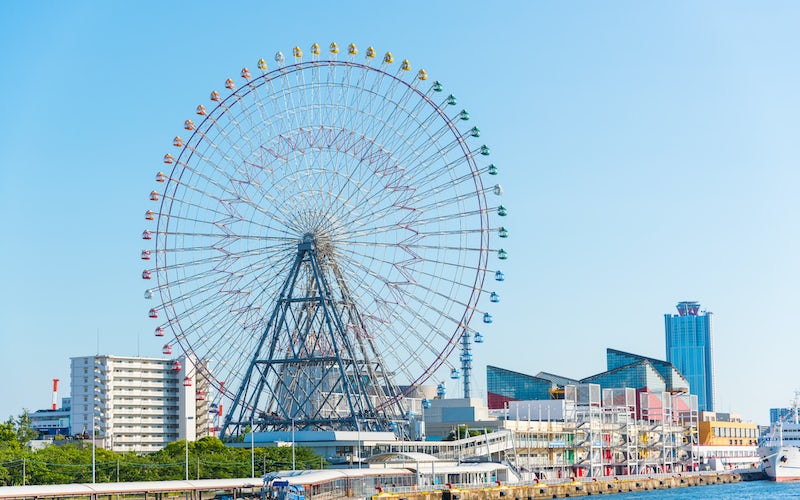 Kema Sakuranomiya Park – a sprawling park of lawns, walking trails and cherry trees on the banks of the Osaka River.

Dotonbori – probably the liveliest spot in the city, an entertainment district with lots of great restaurants and street food vendors. 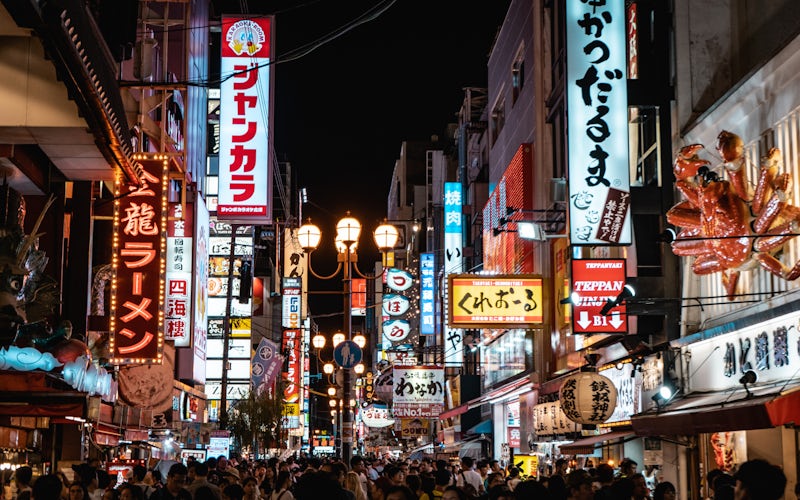 The name of Hiroshima is forever engraved in the history books as this was where the first atomic bomb was dropped, in 1945. Although the tragedy destroyed much of the city its resilient people bounced back, and fears that it would be uninhabitable proved to be unfounded.

Today, this busy port city is a vibrant tourist destination with a rich variety of things to see and do both day and night. They include:

Hiroshima Peace Memorial Park – this commemoration of victims of the world’s first nuclear attack is located at the epicentre of the blast. In this green urban oasis are gardens of colourful cherry blossoms and monuments, memorials and museums dedicated to the fateful event and its aftermath. 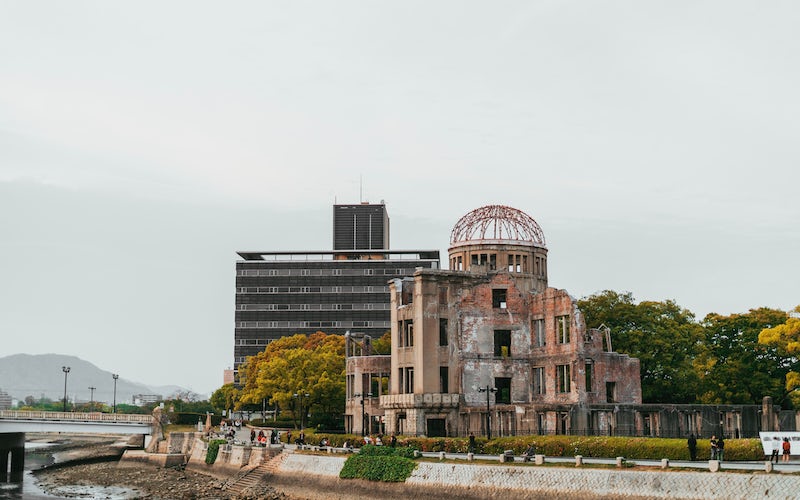 Hiroshima Castle – a beautiful 16th-century castle that was completely destroyed in 1945 but rebuilt in the 1950s. Highlights include the five-story main tower that houses a museum that covers the history of the city and the castle. Wander around the castle grounds which features trees that survived the atomic blast.

Shukkei-en Garden – a landscaped garden on the banks of the Ōta River that was originally laid out in 1620 and once belonged to Emperor Meiji. Stroll along picturesque trails, cross over bridges and unwind by pools and streams. 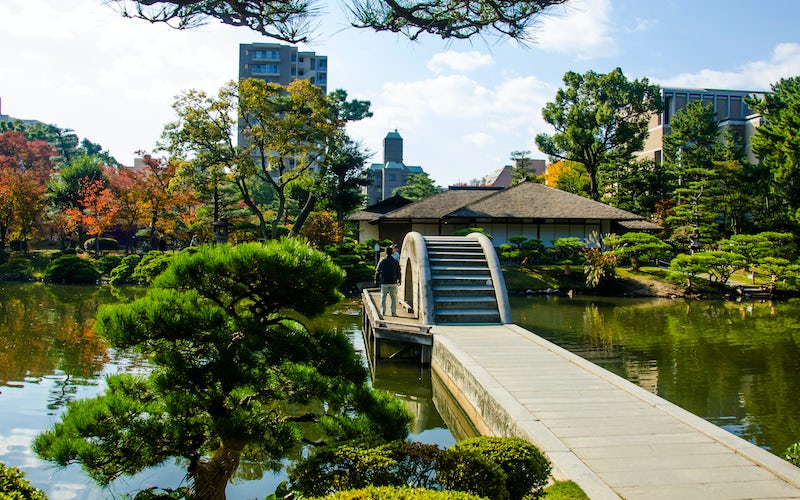 Hiroshima City Asa Zoological Park – a large zoo that's home to dozens of animal species such as cheetahs, zebras, lions and African elephants. There is also a children’s zoo with goats, rabbits, sheep and macaws.

This city and spa resort on the island of Kyushu sits between the mountains and the sea and is home to an abundance of hot springs, bath houses and sand baths.

The country's hot spring capital lays claim to being the second largest source of thermal spring water in the world after Yellowstone National Park in the United States.  In addition to the abundance of thermal waters, Beppu has many other things going for it including mountainous scenery, hiking trails, cultural attractions and monkeys. 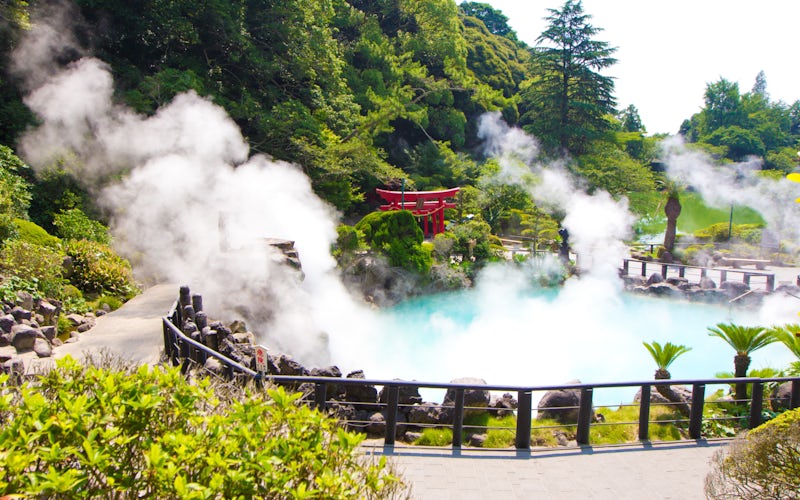 Onsens – relax body, soul and mind in an onsen, a natural hot spring. 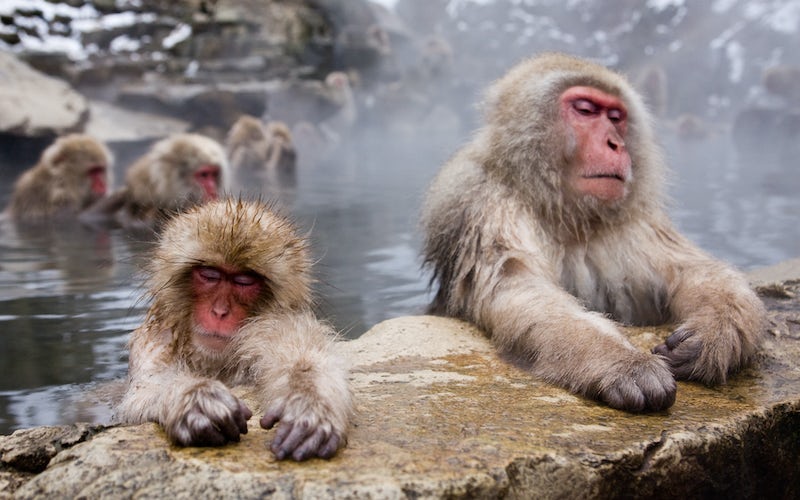 Hot sand baths – head down to Beppu beach to lie in a bath of warm sand.

Takasakiyama Zoo – a monkey reserve at the base of Mount Takasaki where hundreds of Japanese macaques roam freely.

Mount Tsurumi – ride the Beppu Ropeway to the small park near the summit of this 1,375-meter high mountain which overlooks Beppu. 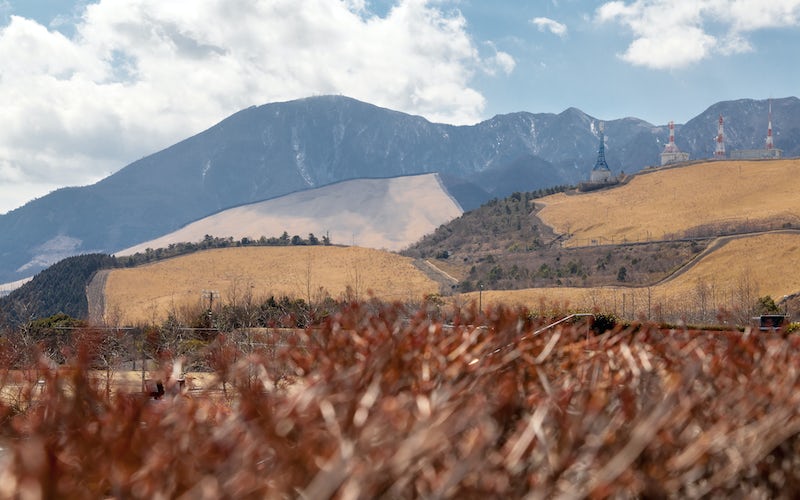 Nestled on a hillside slope between the sea and Rokko mountain range, Kobe is an attractive city surrounded by breathtaking natural scenery. This cosmopolitan place is one of the ten largest cities in Japan and was one of the first ports to open up to foreign trade in the 19th century.

In 1995 Kobe was hit by the devastating Great Hanshin earthquake that killed more than 5,000 people and destroyed tens of thousands of buildings. It is now completely rebuilt and is a modern city with scenic gardens, skyscrapers, museums, sake breweries and world-renowned Kobe beef. Among the many highlights are:

Mount Rokko – enjoy lofty and panoramic views of Kobe from this 931-meter tall mountain which is also home to a botanic garden and music box museum. 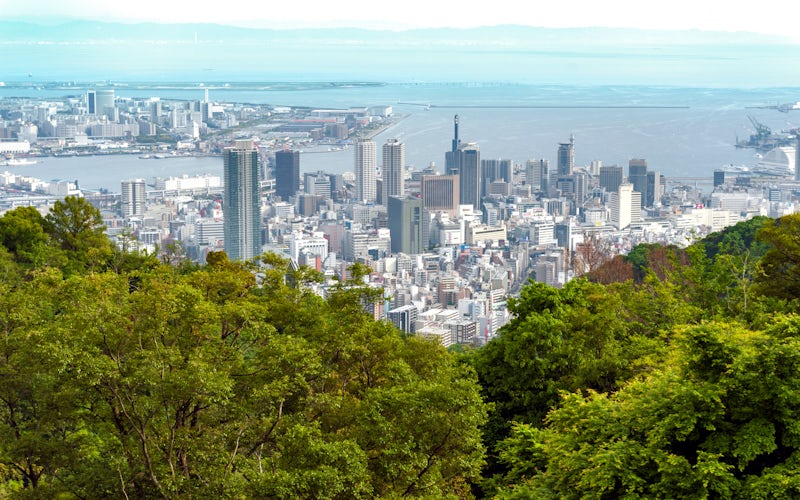 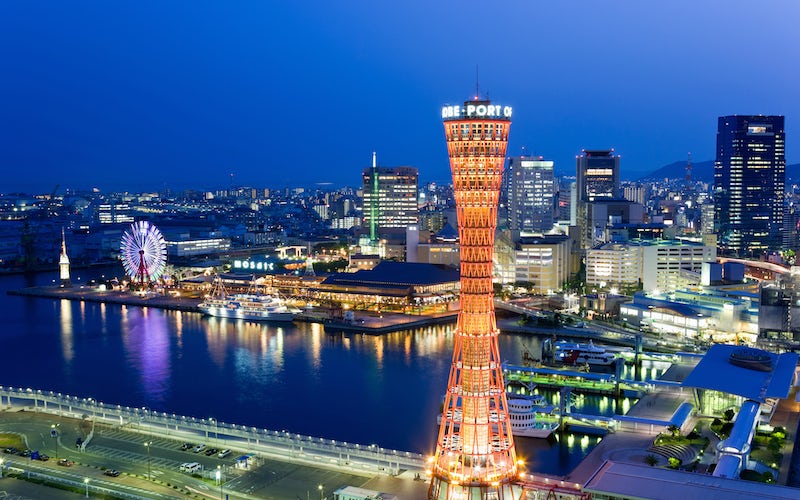 Sake breweries – visit sake breweries and sample varieties of the Japanese rice wine in the Nada district, one of the country's most famous sake-brewing areas.

The Port of Kobe Earthquake Memorial Park – features videos of the natural disaster, galleries with artefacts found in the rubble and exhibits that chart recovery and restoration processes.

The northern city of Sapporo first came to the world’s attention in 1972 when the Winter Olympics were held here. This is the largest city and capital of Japan's mountainous northern island of Hokkaido, known for its ski resorts, annual snow festival, neon-lit nightlife and green spaces.

While winter pursuits are among the biggest tourist draws this chilled-out city of two million residents boasts year-round attractions. Among the many great reasons to visit are:

The Sapporo Snow Festival – one of the biggest winter events in the world attracts more than two million visitors every February for its dozens of monumental ice sculptures and winter activities such as snow rafting and ice skating. 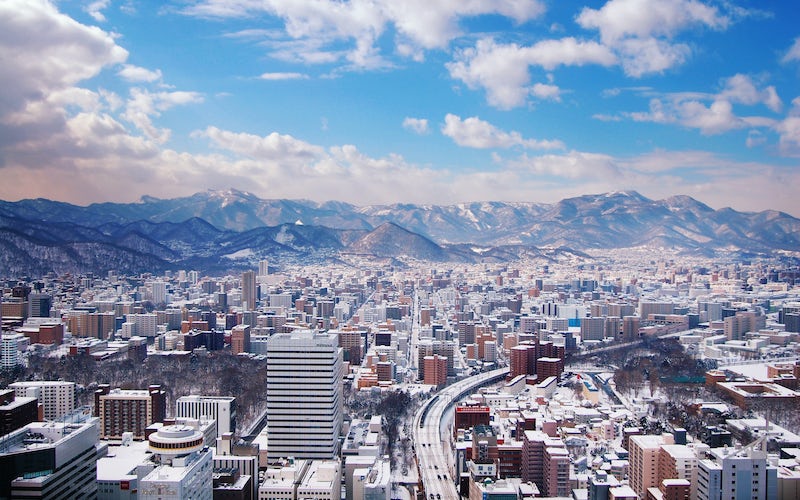 Ski resorts – swoop down the snow-covered slopes of the city's handful of ski resorts including the Bankei Ski Area and the Dynasty Ski Resort.

Sapporo Beer Museum – enjoy tasting sessions and learn about the history of beer in Japan and the process of beer making at this old sugar factory building.

Susukino Entertainment District – this main entertainment area is where the city comes to party. It's packed with restaurants, bars, cafés, cinemas, shops and hotels.

Odori Park – unwind in this city centre park that stretches for about a mile and features lawns, fountains and dozens of different tree species. 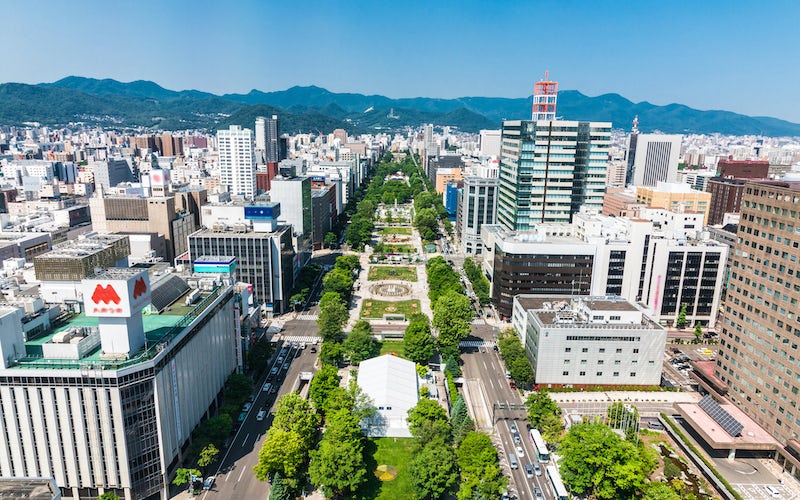 What Is the Best Time of Year to Travel to Tokyo?
Story

Things to do in Tokyo
Wonderguide

7 Quirky Things to Try When Travelling in Japan
Story