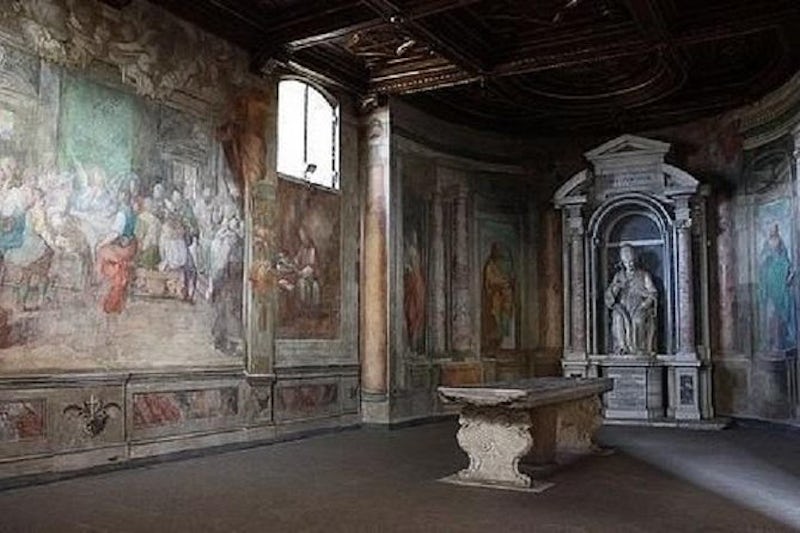 Discover the extraordinary archaeological complex of "Roman Houses of Celio" below the Basilica of Sts. John and Paul.

We’d like to introduce you to a magnificent place that will take you on an underground journey through an Ancient Roman complex of residential and commercial buildings where people once lived and worked, and have left behind stunning architecture, frescoes, and mosaics. Located below the Basilica of Saints John and Paul. Case Romane is accessible from a street named Clivus Scauri, one of the most significant ancient Roman roads on Caelian Hill.
Upon visiting the Roman Houses you will enter into the Room of the Geniuses (or “geni” – Roman mythological divine spirits present in every living being and objects). This space was originally a storage area. The most ornate room is the vaulted Room of the Orant (Worshipper) based on the subject painted on the wall. The walls were painted during the 4th century, with figures of philosophers, a mask of Silenius, a female theater mask, fantasy monsters, sheeps, and goats. Another room you will visit is The Nymphaeum of Proserpina which was originally an interior open-air courtyard that separated the residential buildings from the commercial ones. Niches, fountains, frescoes and mosaics are well preserved and quite remarkable. At the conclusion of this tour, you will taste an aperitif with food and drinks prepared according to the recipes of Rome 2.000 years ago. Equipped with pottery, glass, disposable plates and cups inspired by the ancient tables.

Skip the Line to Celio's Houses