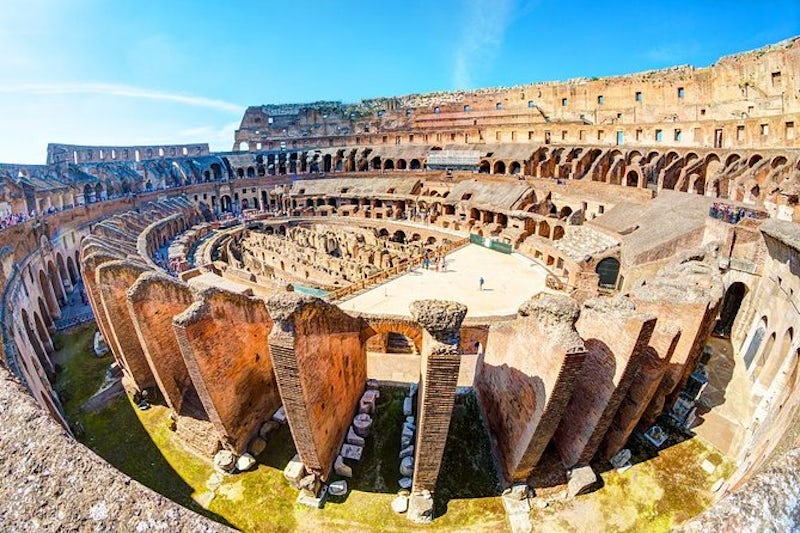 Get direct access from the Gladiators' Gate without suffering the heat, rather then large crowd. Great attention and great emotions are waiting for you! This truly exclusive guided tour, get directly inside the Colosseum from the Gladiator's Gate arriving

Have privileged entrance from the Porta Libitinaria and avoid the crowds. Enter the Colosseum directly into the Arena floor where gladiators gave their performances, hear fascinating stories of combat, and visit the first and second ring.
From the arena floor, you will also have a view directly above the undergrounds. Your exclusive guided tour will continue with the Colosseum's first and second rings. Admire the incredible engineering genius of the Romans and hear about the incredible speed at which they were able to build this structure.

You will then, visit the Roman Forum. This is one of the most important archaeological areas in the world with some of Ancient Rome's most evocative ruins, including the Temple of Julius Caesar, Arch of Titus, House of the Vestal Virgins, Senate House and Basilica of Maxentius. Admire the Roman Forum's Sacred Way, the triumphal road where the Centurions of Caesar marched after their return from countless battles and conquests.

Explore Palatine Hill, the site of an older settlement from the 9th century BC, said by the legend as the place where Romulus founded the original city of Rome. Start your visit from the impressive Arch of Constantine, emblem of victory which commemorates Emperor Constantine when he ascended the power. Getting on the hill appreciate this archaeological site, with the ruins of many generations of Rome’s emperors on show. Enjoy an impressive view of the valley of the Roman Forum. Continue your tour visiting the Horti Palatini Farnesiourum and its terrace. Here surrounded by fine gardens and elegant fountains you will be given an incredible panoramic view.