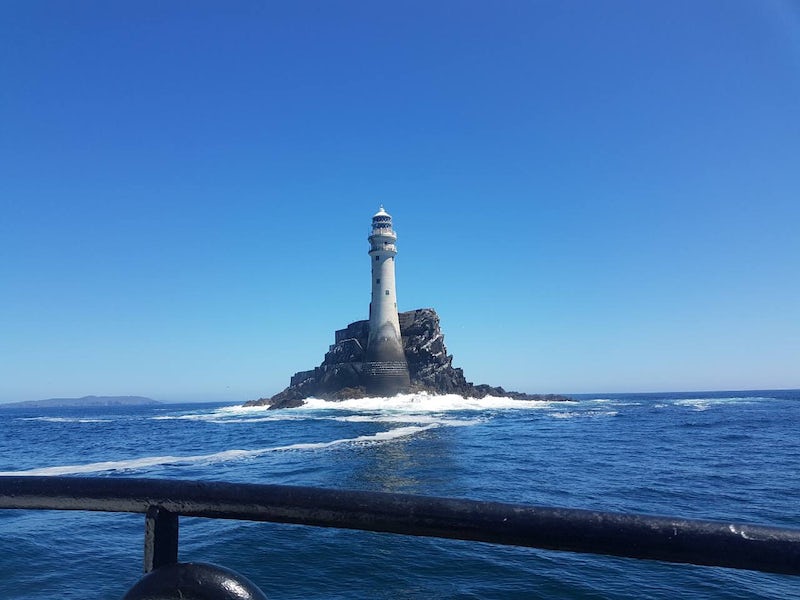 Take a scenic ferry trip to visit Cape Clear Island and experience this Gaeltacht island’s culture and life of old, then travel on to see the famous Fastnet Rock Lighthouse. Available all year around from Baltimore. Min 1 Max 90.

Join this tour from either Schull or Baltimore with a crossing on the ferry through the beautiful waters of Roaring Water Bay and arrive in the wonderful north harbour on Cape Clear Island. A shuttle bus service is provided from the harbour to Cape Clear Heritage Centre, where you can explore the history of both the Island and the interactive Fastnet Display about the Fastnet Rock itself.

On the way back to the harbour we stop along the way to visit the memorial on the Island to the 1979 Fastnet Yacht Race Disaster. During the disaster 15 yachtsmen and 3 rescuers died in the deadliest storm in the history of modern sailing that carved its way through the fleet on the 615 mile dash from England to Ireland and back again. On the 13–14 August 1979, of the 306 yachts taking part, 5 were sunk, 100 suffered knock downs, and 77 rolled at least once due to high winds and "mountainous seas".

Then spend some free time exploring this wonderful island where you can see the Fastnet Rock Lighthouse in the distance from one of the spectacular look out points on the walking trials, or enjoy some fresh Island produce during lunch at one of the island’s bars and restaurants.

After lunch we re-board the ferry where our experienced local captains proceed further out into Ireland’s real Wild Atlantic Way. You might even catch a glimpse of the magnificent whales and dolphins en route!

As we slowly circumnavigate the tallest and widest Rock Lighthouse in Ireland and the UK, take in its deep history and culture as it plays through the on board audio system. Famous for being the “Teardrop” of Ireland, the last glimpse of Ireland that the immigrant ships saw before they headed over the horizon to the New World, America. As you listen your breath will be taken away while you try to comprehend how man could live in such isolation on what was also known as An Carraig Aonair which means` Lonely Rock’ or how in 1985 a wave broke the lens of this ocean giant that stands 159 foot tall.

Once we have circled the Rock twice, in different directions, so all passengers can get the perfect photo, we head for home enjoying the spectacular scenery until we reach our final port whether it be Baltimore or Schull.

For groups of 30 or more we can arrange fully guided private departures to the Fastnet Rock at a time that suits with or without the Cape Clear Island stopover. We can customise the tour to suit the group’s requirements further if required.

Passengers can start their journey in Baltimore and finish in Schull. Baltimore-Cape-Schull or Schull-Cape-Baltimore.

Appropriate rainproof gear and some warm cloths - temperature is always cooler at sea. If the weather is good bring sun cream, sun glasses and hat.