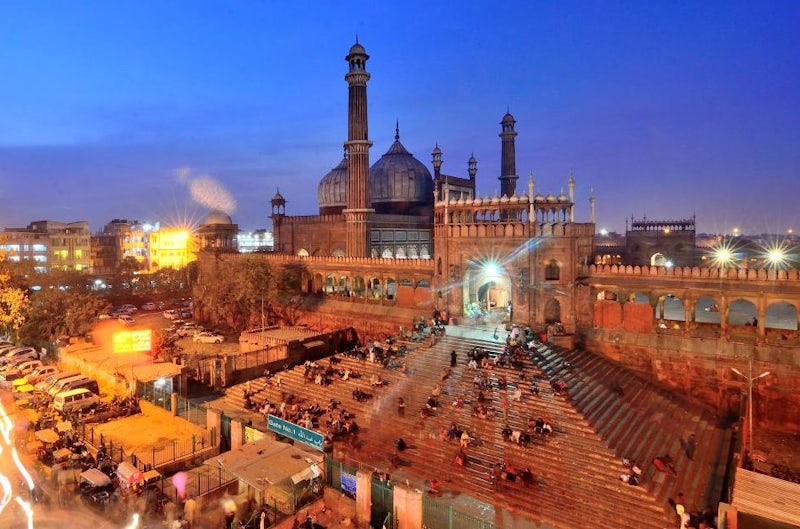 Explore India's capital city at night and see the vibrant energy, eclectic people and colorful culture come to life in a new way. Follow your friendly guide through the urban landscape in a private air-conditioned vehicle and experience the thrill of Delhi at night.

Red Fort is a historic fort in the city of Delhi in India. It was the main residence of the emperors of the Mughal dynasty for nearly 200 years, until 1856. It is located in the center of Delhi and houses a number of museums. In addition to accommodating the emperors and their households, it was the ceremonial and political center of the Mughal state and the setting for events critically impacting the region.

India Gate (originally called the All India War Memorial) is a war memorial located astride the Rajpath, on the eastern edge of the "ceremonial axis" of New Delhi, formerly called Kingsway.

The Laxminarayan Temple, also known as the Birla Mandir is a Hindu temple up to large extent dedicated to Laxminarayan in Delhi, India. Laxminarayan usually refers to Vishnu, Preserver in the Trimurti, also known as Narayan, when he is with his consort Lakshmi. The temple, inaugurated by Mahatma Gandhi, was built by Jugal Kishore Birla from 1933 and 1939. The side temples are dedicated to Shiva, Krishna, and Buddha.

It was the first large Hindu temple built in Delhi. The temple is spread over 7.5 acres, adorned with many shrines, fountains, and a large garden with Hindu and Nationalistic sculptures, and also houses Geeta Bhawan for discourses. The temple is one of the major attractions of Delhi and attracts thousands of devotees on the festivals of Janmashtami and Diwali.

Gurudwara Bangla Sahib (listen) is one of the most prominent Sikh gurdwara, or Sikh house of worship, in Delhi, known for its association with the eighth Sikh Guru, Guru Har Krishan, as well as the pool inside its complex, known as the "Sarovar." It was first built as a small shrine by Sikh General Sardar Bhagel Singh in 1783, who supervised the construction of nine Sikh shrines in Delhi in the same year, during the reign of Mughal Emperor, Shah Alam.

It is situated near Connaught Place, New Delhi on Baba Kharak Singh Marg and it is instantly recognizable by its golden dome and tall flagpole