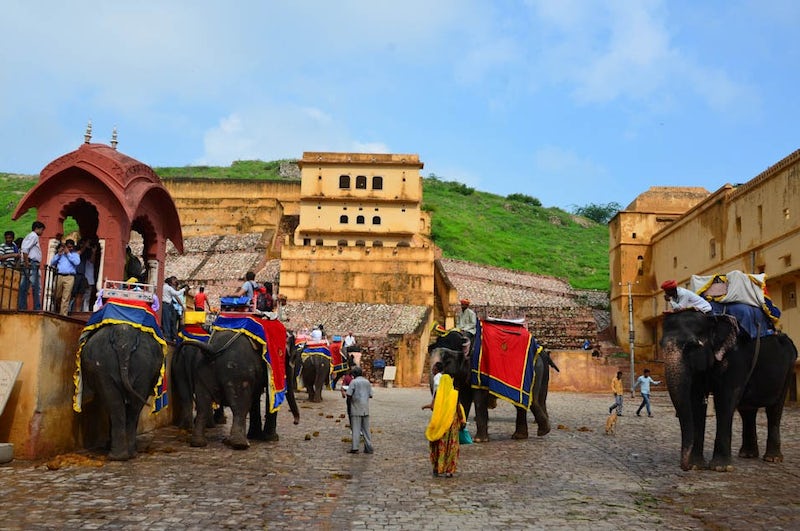 On this 5-days 4-nights private tour of India's Golden Triangle. From Delhi, travel by private air-conditioned vehicle with English speaking driver. Includes all accommodation (choose from 3, 4 or 5 star hotel options) and breakfast.

Day 1: Delhi - Arrival
On arrival at New Delhi airport. You will be met & greeted by a representative and transferred to your Deli hotel for your overnight stay.

Day 2: Delhi - Agra
In the morning after breakfast, drive to Agra. Upon arrival you will visit the magnificent Taj Mahal - one of the seven wonders of the world. Also visit the Agra fort – the rusty and majestic red-sandstone fort of Agra stands on the banks of the river Yamuna. Overnight stay at a hotel in Agra.

Day 3: Agra - Fatehpur Sikri - Jaipur
After breakfast, drive to Jaipur en route visit Fatehpur Sikri that was built by Emperor Akbar as his capital and palace in the 16th century. Also visit the Bulund Darwaza the largest gateway in the world. Thereafter, continue drive to Jaipur. Overnight stay at a hotel.

Day 4: Jaipur - Sightseeing - Delhi
You have full day tour of the impressive Amber Fort, located on a ridge just outside Jaipur City. At the foot of the hill you will make a slow but steady climb up to the main gate, making your entrance in the time honored fashion. The Fort, afternoon tour of the City - "The Pink City" is spectacularly set within surrounding rugged hills, dotted with ancient ruined fortresses.other places to visit is City Palace, Hawa Mahal "Palace of the Winds", and the open-air Jantar Mantar Observatory. Later evening drive back to Delhi. Overnight stay at a hotel.

Day 5: Delhi - Sightseeing - Airport Drop
After breakfast on your final day, you will embark on a full-day sightseeing tour of Delhi. Starting from Old Delhi, visiting the Raj Ghat - the memorial site where Mahatma Gandhi was cremated; Jama Masjid - the largest mosque in India and the Red Fort. After lunch, you will go New Delhi sightseeing. Starts from Humayun's Tomb, Qutub Minar, a drive along the ceremonial avenue- Lotus temple, India Gate & birla temple. Later you will be transferred to Delhi Airport for your onward journey at the conclusion of your tour.