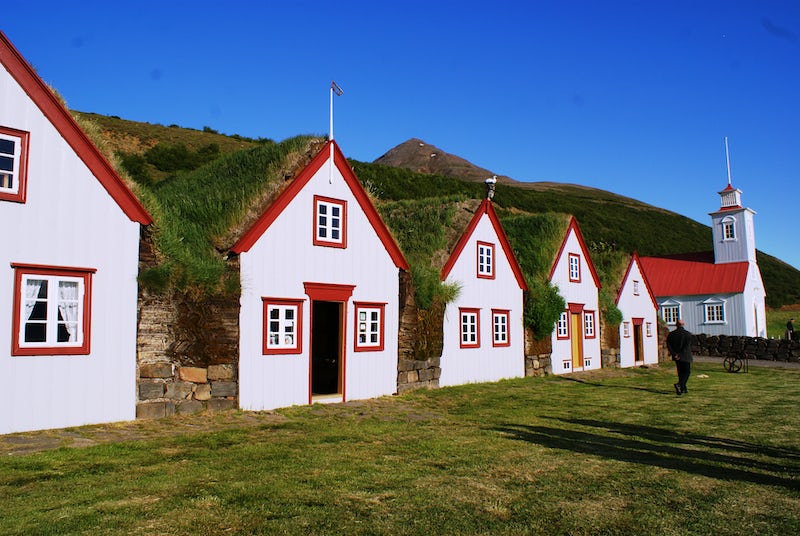 Investigate the intimacies of Icelandic culture, heritage, and history in this singular combination of sights and settings.

Goðafoss is in the glacial river Skjálfandafljót and is one of Iceland´s great waterfalls. There are a number of waterfalls in this same river; Ullarfoss, Barnafoss, Hrafnabjargarfoss and Aldeyjarfoss.

Goðafoss plays a large part in Icelandic history. The legend tells of a local chieftain Þorgeir, who threw statues of the pagan gods into a waterfall after the nation became Christians. The name Goðafoss means waterfall of the gods.

Laufás in Eyjafjörður is located by the estuary of the river Fnjóská. The old farm is a good example of a wealthy vicarage in earlier times. The house that is a turf-clad timber building, has a history that goes right back to the Middle-Ages. It has been rebuilt regularly through the centuries whenever needed. The house that stands now was built between 1860 - 1877. It was then rebuilt in the form we see today. The house is mostly timber frame structure, but part of the tunnels are built with stave construction and the oldest part of the house - The Bridal Room is a combination of both methods.

One of the gables, the one far most to the right, is slightly younger then the other ones and look a little bit different. It is not the same height as the others and the lining and size of windows is not the same.

The Old Farmhouse at Laufás was last inhabited in 1936. Until a new vicarage was built beside it. In 1948 the National Museum's Historic Building Collection took the old house under protection and since then it has been a museum.

The artifacts in the house are both from the old house and also from neighbouring farms. They were collected mainly in the early sixties. The artifacts on display give visitors a good idea of how Icelanders used to live until the early 20th century.

In the church at Laufás is a pulpit from the year 1698. However the church itself is from 1865. The church is a good testament to the ambition of the keepers in their time. Like most Icelandic churches it is humble and beautiful building.

Christmas House: Open all year round, this magical house looks like it came straight from a book of fairy tales. Outside in the garden there are plenty of hidden things for you to find and enjoy!

Upon entering the Christmas House you are greeted with the warmth of a log fire and the songs and the scents of the festive season.

Even the toilet is something to see. Try to find the Santa's troll mother (Gryla) hidden in her cave. The Christmas House is a magical place to visit, all year round. A fun tour for all the family.