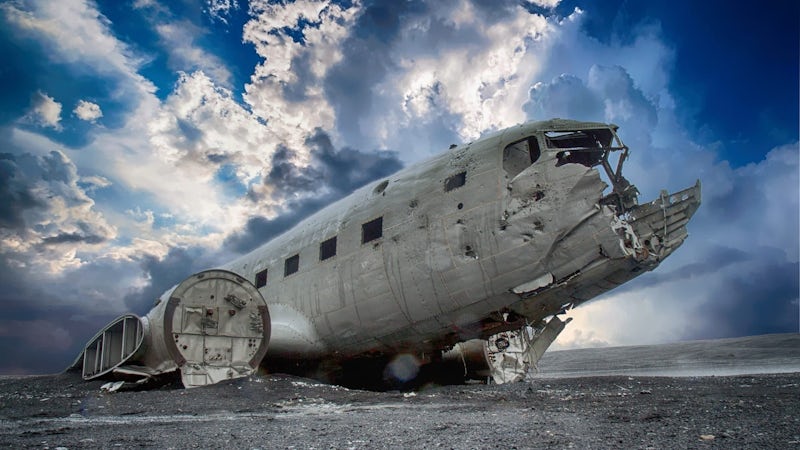 Get ready for an Icelandic adventure to remember on this 3-day small group tour that explores the famous sights of the Golden Circle and the South Coast by minibus! Get ready to visit the mysterious DC-3 Plane Wreck, hike on one of Europe's largest glaciers, and experience the beauty of a glacier lagoon. Other tour highlights include Gullfoss waterfall, Diamond Beach, and Vatnajokull National Park.

You will be picked up from your accommodation, and from there, set out to see Iceland’s most famous route: The Golden Circle. You’ll get the chance to experience everything that the area has to offer, including geothermal areas, waterfalls, and our favorite locals.

Thingvellir National Park
We visit the place where the two tectonic plates, the North American and the Eurasian plate, are moving away from each other. Few places in the world offer a better and clearer view of this massive geographic activity. The biggest natural lake in Iceland is also located at Thingvellir National Park and hosts a great variety of fish and bird life. Thingvellir is also an important place for Icelandic national history. At Thingvellir Icelanders founded their parliament in 930 a.d. where the chieftains had their annual meeting every summer. The name “Thingvellir” translates to “Parliament Plains”.

Gullfoss Waterfall
The melting water from Iceland´s second biggest glacier, Langjökull, falls into a deep canyon forming the majestic “Golden Falls”. On a sunny day, you can see the glacier Langjökull in the distance and enjoy a rainbow in the mist of the waterfall, an Instagram blockbuster waiting to happen!

Geysir Geothermal Area
The Geysir geothermal area hosts hundreds of colorful hot springs and two geysers, erupting hot springs. One is called “Geysir” and name giving for all the geysers in the world. Today, however, it erupts very seldom. The other geyser is called “Strokkur” and erupts every 5 minutes up to 40 meters.

Faxi Waterfall
Faxi waterfall is smaller than the other ones, yet just as stunning. It is situated in the Tungufljót river, a famous salmon river. Alongside the river, there is a salmon staircase built to extend the salmon areas of the river. During the summer months, fishermen are often seen trying their luck at the waterfall and salmon seen jumping up the staircase.

Traditional Dairy Farm and Free Ice Cream
We visit Efstidalur farm owned by the same family since 1850. This Icelandic family-run business sticks to traditional Icelandic farming culture and focuses on cows and cattle breeding. You will be able to enjoy their tasty farm-to-table dairy products, see the stunning mountain view and pet the friendly animals. Tröll Expeditions will invite you to taste the ice cream yourself and meanwhile watch the animals relaxing in the stable.

Kerið Volcanic Crater
A stunning volcanic crater with a lake in the middle which formed in an eruption 3,000 years ago. Some believe that it was formed in a vast explosion. The more likely theory is that the volcanic cone collapsed into its own magma chamber after the eruption finished. Kerið is the perfect location to learn more about Icelandic geological history and observe a mind-blowing natural wonder.

After you had seen all these magical places, you’ll get back on the bus and we’ll take you to the hotel to rest and get ready for the second day of your tour.

Seljalandsfoss waterfall
The adventure begins when we pick you up in Reykjavík in a small and comfortable minibus before heading straight to the South. Our arrival is announced by the powerful theatrics of Seljalandsfoss. Bring a raincoat and you’ll be able to make the short hike behind the falls. The scene behind the fall and the trembling ground from the power of the falling water makes for an automatic Instagram blockbuster!

Skógafoss waterfall
Further east along the coast is Skógafoss waterfall. Skógafoss is an incredibly picturesque sight. Tucked in a little gorge, the river Skógá tumbles down a 60 meter cliff before continuing down the landscape towards the Atlantic Ocean. Alongside the gorge a staircase can take you to the shelf above the waterfall for stunning views. See if you can count your steps on your way up.

Glacier Hike in Skaftafell in Vatnajökull National Park
We will hike an outlet glacier spawning from the one of the largest glaciers in the country, Vatnajökull. After meeting our highly trained glacier guides and strapping on our safety and glacier equipment, including helmets, harnesses, crampons and ice axes we hike on the ice for an hour and a half. A spectacular experience and opportunity to learn more about this breathtaking and increasingly rare natural phenomena. Skaftafell area has been used as a filming location for many famous TV shows and films, such as Game of Thrones, Interstellar, James Bond, and others… Follow the steps of your favorite characters into the glacier!

Jökulsárlón, the Glacier Lagoon
Heading off day nr. 2 is Jökulsárlón glacier lagoon, a 200m deep glacial lagoon fed by Breiðamerkurjökull, an outlet glacier of Europe’s largest glacier. Enormous icebergs come from Breiðamerkurjökull all year round so the lagoon is usually filled with ice that floats south. Try walking alongside the glacier lagoon enjoying the magnificent views and dead silence of Icelandic nature.

The Diamond Beach
On the other side of the road the icebergs from Jökulsárlón glacier lagoon float into the Atlantic Ocean where they are quickly thrown back to shore by the tide and winds. This black sand beach is full of smaller ice rocks in all shapes and sizes, sparkling like diamonds in the daylight. The ice itself comes in all shades of white and blue forming beautiful contrasts, guaranteed to make your Instagram account pop!

DC-3 Plane Wreck on Sólheimasandur
After that, we head out to Sólheimasandur desert where a US Navy DC3 crash landed in 1973 after running out of fuel in midair. The wreck has since then been immortalized in numerous music videos and viral photographs. Hike over volcanic sand and ash towards a black sand beach containing a crashed Navy airplane deemed too far away to salvage. If you are not so fond of biking, you’ll get the chance to hike up there. Either way, enjoy!

Reynisfjara, the Black Sand Beach
Heading further east, we visit the black sand beach of Reynisfjara where the Atlantic coastline presents massive waves hitting the unique basalt columns in the cliffs above the sand. Rock pillars in the water and the cliffs of Dýrhólaey are seen in the distance. This area of the south is also a paradise for bird lovers, as puffins and dozens of other unique species nest on top of these cliffs in the summertime from June to August.

Pick up is from designated locations in Reykjavík. Pick up from Keflavík airport or outside of the greater capital area is not available.

You will see the designated pick up locations in Reykjavík on a drop-down menu at the time of booking.