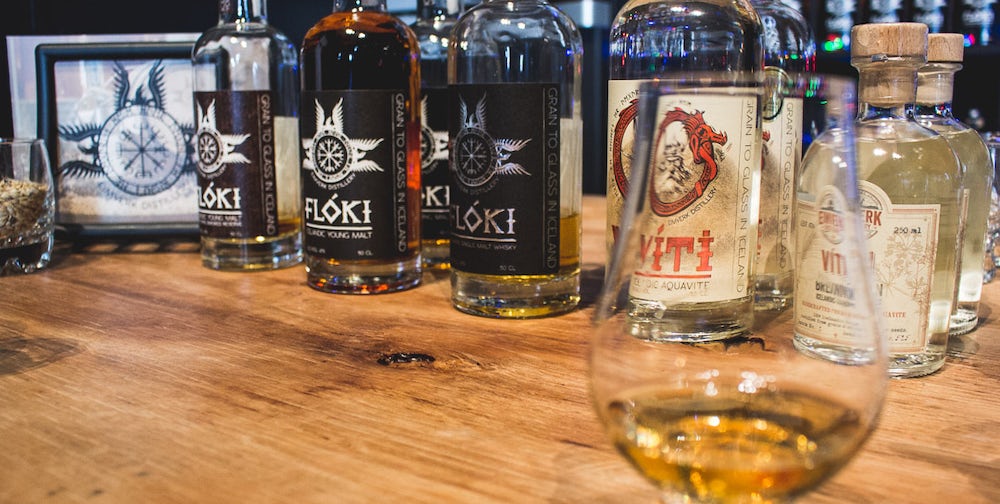 Have you ever tried Icelandic whiskey? Visiting a whiskey distillery in Reykjavik is a must for all whiskey-lovers and others who are curious about it. Who knows if you might try a sip of the traditional Brennivín as well?

We’re sitting at a bar in a large room full of barrels, aging several types of whiskey and gins, waiting for the rest of the small tour group to arrive. I’m drinking one of the best gin and tonic I’ve ever tried, poured from Eimverk’s flagship gin product, Vor. The gin won a double gold award at the San Francisco World Spirits Awards in 2014, the first year it was sent across the Atlantic – no mean feat.

Behind the bar is Páll, who tells me that no one in the family knew what to expect from entering their newly crafted Icelandic gin into the competition. It’s an impressive drink, and as we chat amicably whilst we wait, I eye off the whiskey and gin bottles that are lined up on the bar, primed for tasting.

I’m at the Eimverk Distillery, nestled in a quiet corner of Garðabær, about 15 minutes out of downtown Reykjavik. The entire place smells, obviously, like alcohol; but it’s a pleasant one. Founded in 2009, the family owned-and-operated distillery is the only one in the entire country that makes its spirits from 100% locally sourced ingredients – even barley. 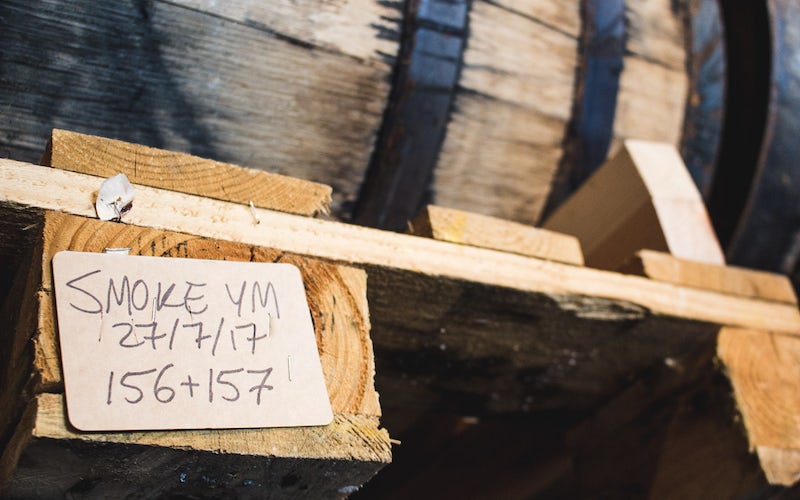 “We’re going to split the tour up into three parts” says Páll once everyone has arrived. “First up we’ll try the whiskeys – then we’ll take a break and go into the production area, and then after that we’ll come back to try the gin. And after that, the Brennivín.” He gestures to the small, attractive looking bottle of ‘black death’ in the middle of the whiskey and gins. An involuntary shudder runs down my spine at the thought.

First up is the Flóki Young Malt, aged in its barrel for just one year. Technically it’s not a whiskey, as it needs at least 3 years in a barrel to be classified as one. We sip on our small shots as Páll tells us about the humble beginnings of the distillery.

Never intending to start their own distillery, the owners just wanted to see if they could make whiskey on their own. Self-taught over the years through lots and lots of YouTube videos, they eventually found something that they thought would work, and afterwards their path naturally led them towards starting up their own distillery.

Three years between 2009 and 2012 were sunk into research and development before production began in 2013. The first result was the Young Malt and the gin, which as was mentioned before, went on to win double gold in San Francisco. 4 years later in 2017, the Flóki Single Malt was finally ready to go on sale, and it’s what we taste next. 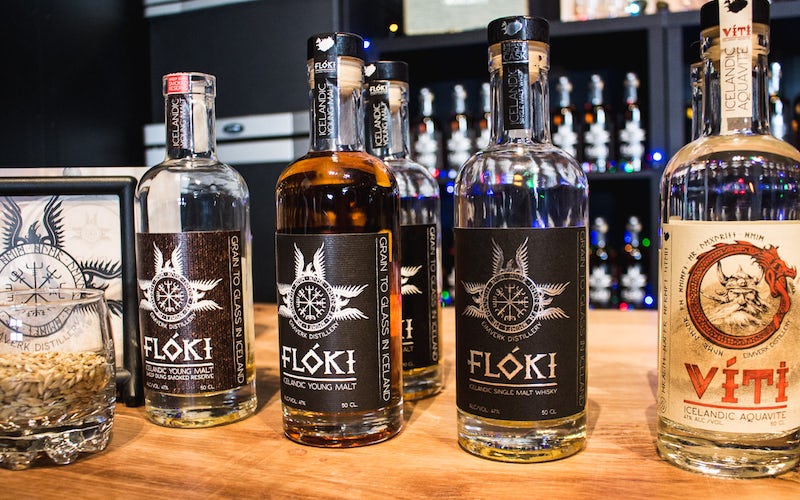 I’m pleasantly surprised at how smooth it is. “This is the only whiskey that is 100% Icelandic, and it’s only been around for 6 months now” says Páll. After aging from 2014–2017, it’s finally ready – and delicious. The climate in Iceland is unforgiving, but during the summer months, it is possible for barley to grow – and there are three different farms along the south coast that are the suppliers for the distillery. It has a lower content of starch and sugar than barley grown in warmer climes, so about 50% more is needed than in usual whiskey distilling.

We also try the sheep dung smoked Young Malt, a method that throws back to the old Icelandic tradition of, well, lighting sheep dung on fire to smoke things. On one of the farms, the family smokes the barley before bringing it back to Reykjavik, and despite the name, I greatly enjoy sipping on the smoky malt. The method is uniquely Icelandic, and the only drink of its kind in the world. 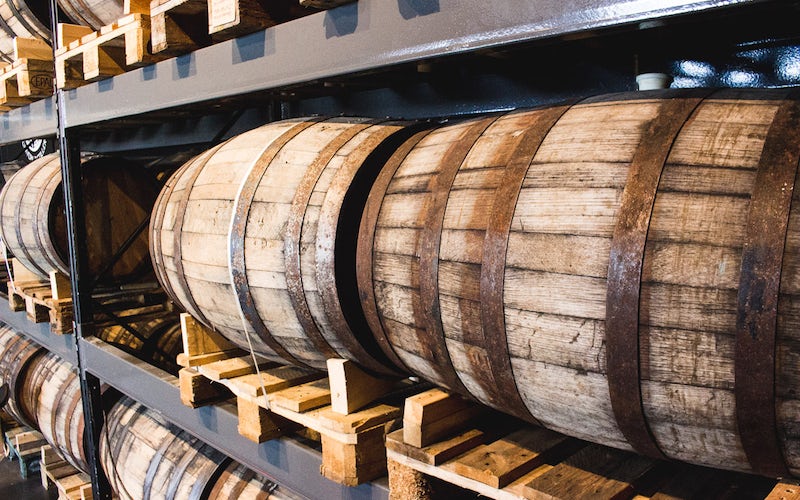 A Young Distillery with a Deep History

The tour continues into the production area, where vats of alcohol, sacks of shredded barley, and many machines are scattered around the room. Páll launches into a detailed description of the creation process, of which I won’t go into here in writing. Instead, the history behind the company is equally as interesting as its beginnings.

The distillery is named after the Viking Hrafna-Flóki, who was the first of the Norsemen to set sail for Iceland, and the first to name the country Ísland, after climbing a mountain and spying a fjord full of ice during his first winter there. The Flóki logo has three ravens in it, surrounding Icelandic runes. It is said that Hrafna-Flóki took three ravens with him on his voyage towards Iceland, letting them free to find land.

The history of the distillery is closely tied with this adventurous Viking. His pioneering spirit inspired the family to follow the path-less-travelled, step out of the norm and try something different. 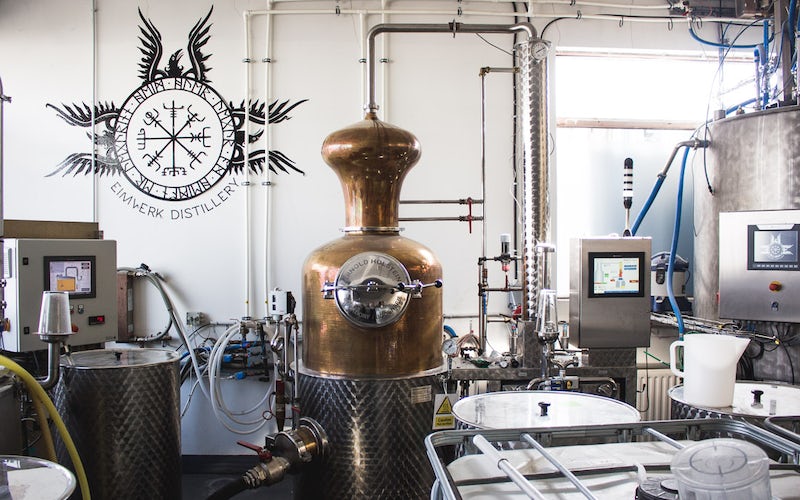 The Gin - An Infusion of Icelandic Ingredients

Back at the bar, it’s time to try the gins. The award winning Vor is up first, delicious as ever. When thinking about making gin, the owners decided upon only using Icelandic herbs and florals that had been growing in the country for the past 100 years. The list of ingredients sounds delicious; there’s rhubarb, juniper berries, kale, crowberries, Icelandic moss, and more, all hand-picked by people across the country. Infused into the mixture in its third distillation, it’s an exotic taste of Iceland in a drink.

The next gin is barrel aged for 2 months – the result is a darker, almost golden colour, and a much more intense flavour. Then comes the Navy Strength gin, a strong and potent mix, before finishing with the Sloe Style gin, a tasty and fruity mix. To finish up the tour, it’s the ‘black death’, the premium Brennivín.

Having had rough drinks of this before, I’m a bit hesitant, but deign to give it a try. It’s incredibly nice, and not at all what I’m used to after visiting the bars in downtown Reykjavik. The taste of caraway seed is there of course, but also notes of the herbs and botanicals that are used in the process are there as well; the result is a potent but very tasty version of the black death, and the perfect way to cap off the tour. 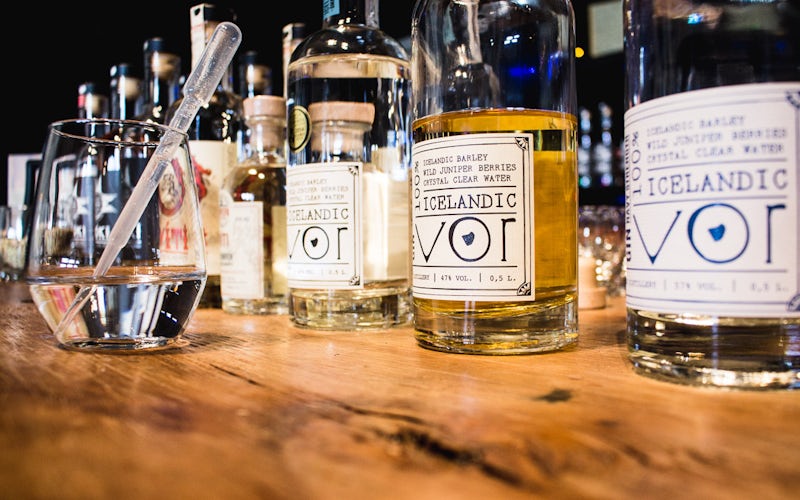 James was a guest of the Eimverk Distillery. All thoughts, opinions, and photos are his own.

Price: 2990 isk
Duration: 1 – 1.5 hours
Address: Lyngás 13, Garðabær
Getting There: Bus number 1 goes past the area (get off at the stop Ásgarður), or a taxi will take around 10-15 minutes from downtown Reykjavik.

Tours are only available by appointment, so make sure to book your tour now!