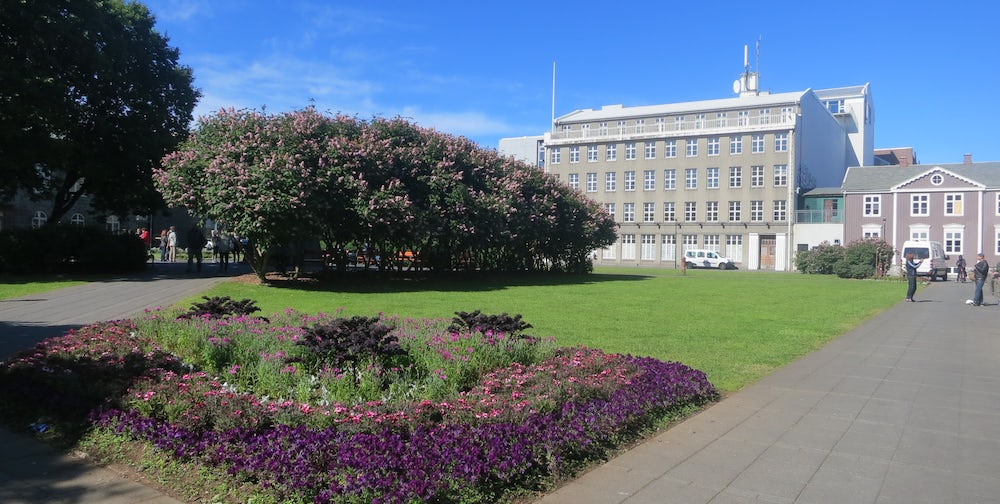 Where to Go in Reykjavik When it's Sunny

If you're lucky, you might experience some sun while travelling in Iceland. I decided to share my go-to places in Reykjavik when the sun is shining.

This article was updated on the 23rd of December 2018.

You might have heard that it rains a lot during the summertime in Iceland and I am a afraid that these rumours might have some truth. On the other hand, if you’re lucky, you might get the chance to experience some nice and sunny weather in Iceland, although the temperatures rarely go over 70 degrees F.

Icelanders go nuts when the sun is shining. They basically stop everything they’re doing and go someplace they can enjoy the sun (and get a tan). An Icelandic comedian made the sketch shown below that illustrates this mentality very accurately:

If you want to follow the example of the locals, I chose some places that you can’t go wrong with when the sun is shining in Reykjavik.

The outdoor swimming pools in Reykjavik are probably the most popular destinations for Icelanders that are anxious to bask in the sun. Here are my go-to pools in good weather: 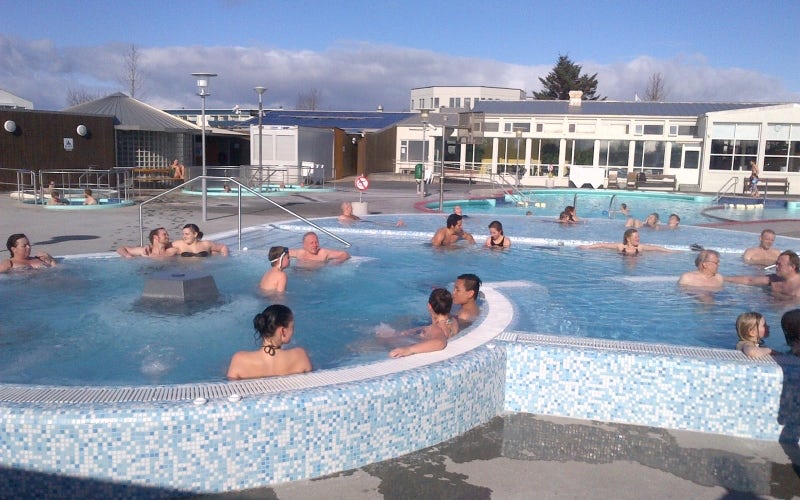 I grew up in the west side of Reykjavik so I used to go to Sundlaug Vesturbæjar a lot. It wasn’t anything special back then, but it was renovated a couple of years ago. Now there’s a huge warm pool where people lounge for hours, especially if the sun is shining.

There are some benches on the porch too where you can lay flat or sit and read in the sun.

You can choose either an indoor or an outdoor changing room. If you're interested in the one that is outdoors, just say so when you pay the entrance fee. You will receive a key for the outdoor lockers and get some information about the location and so on. 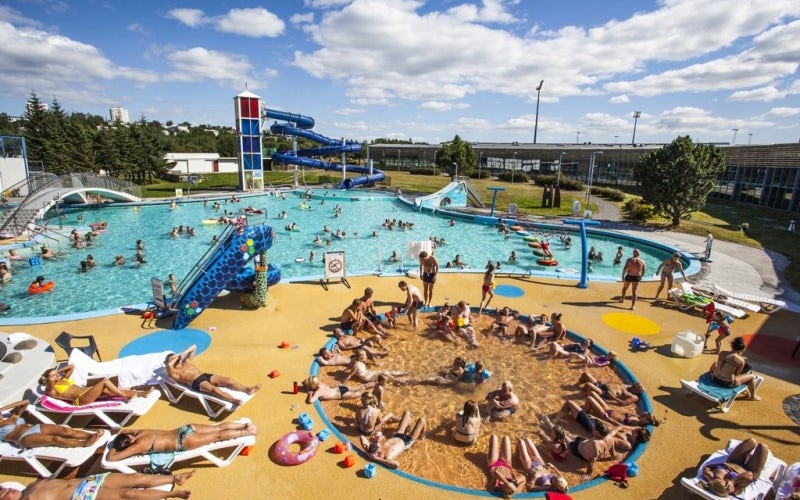 It gets a bit crowded when the sun is shining. Photo: www.reykjavik.is. 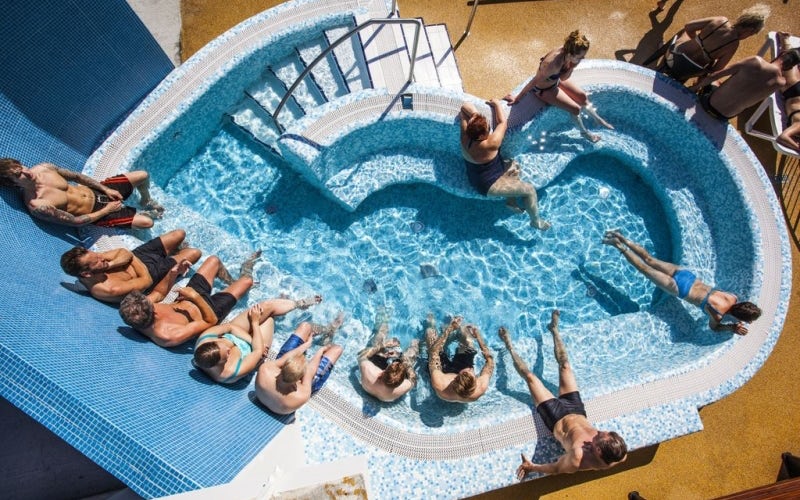 Laugardalslaugin is Reykjavik’s largest swimming pool and it’s usually very crowded on sunny days. There are plenty of different pools and tubs and there’s a large outdoor area where you can exercise or linger in the sun.

I recommend the ocean-pot, which is a hot tub in the northeastern corner of the swimming pool area. It’s filled with sterilised ocean, warmed up to a comfortable temperature.

If you’re feeling heroic, you can also take a quick dip in the cold tub, which is a barrel filled with 40℉ cold water. 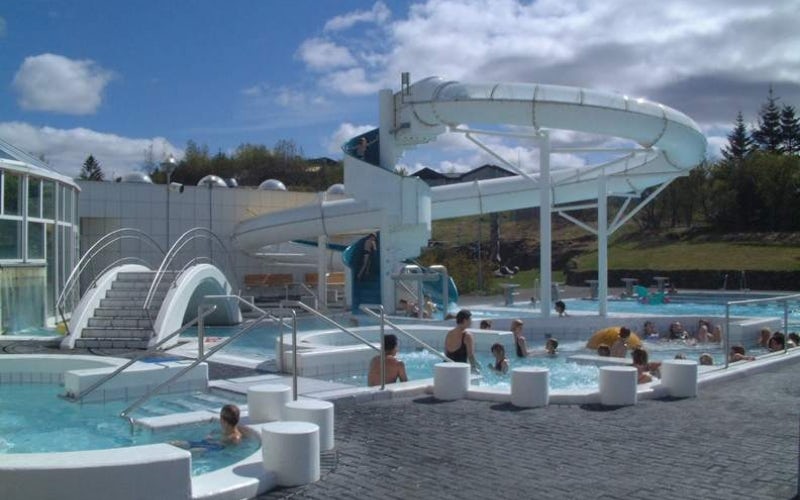 You have to try the slide if you pay a visit to the pool! Photo: www.reykjavik.is.

Árbæjarlaug is a pretty large outdoor pool located in Árbær, Reykjavik. Kids enjoy themselves a lot at the Árbæjarlaug, there’s a large slide and all kinds of fun things to do.

Árbæjarlaug is a very nice pool to visit in good weather. The largest hot tub is ideal for laying flat in the sun while the kids are busy playing in the children’s pool.

The facilities are nice and modern as well and perhaps a bit more spacious than Laugardalslaugin and Sundlaug Vesturbæjar.

Árbæjarlaugin isn’t as centrally located as the other two, but that also means it’s less crowded. 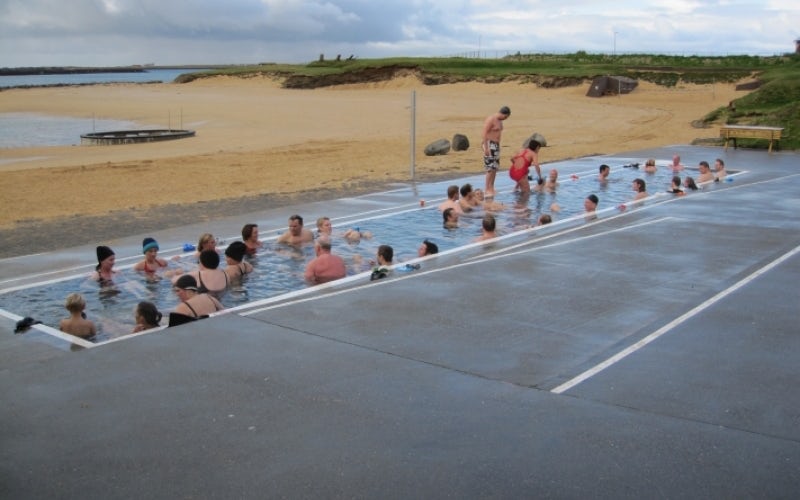 This is one of two geothermal hot pools at the beach. It's also nice in the winter. Photo: www.reykjavik.is.

Beach-lovers must be thrilled to hear that there is actually a beach in Reykjavik! Nauthólsvík is partly a man-made beach located near Öskjuhlíð Hill.

Geothermal water flows from nearby sources into the cold ocean, making it slightly warmer. This means that you can actually swim in the ocean, something that us Icelanders consider a luxury.

There are also two geothermal hot tubs at the beach, one is right on the seashore and the other one is on the patio by the changing rooms.

There are showers and changing rooms at the beach and a small kiosk selling ice cream and refreshments. There's no admission fee during the summer!

Icelanders love picnicking, but the weather is seldom nice enough for such activities. There are a few green areas that are excellent for picnicking when the sun is shining. Here are the options you have: 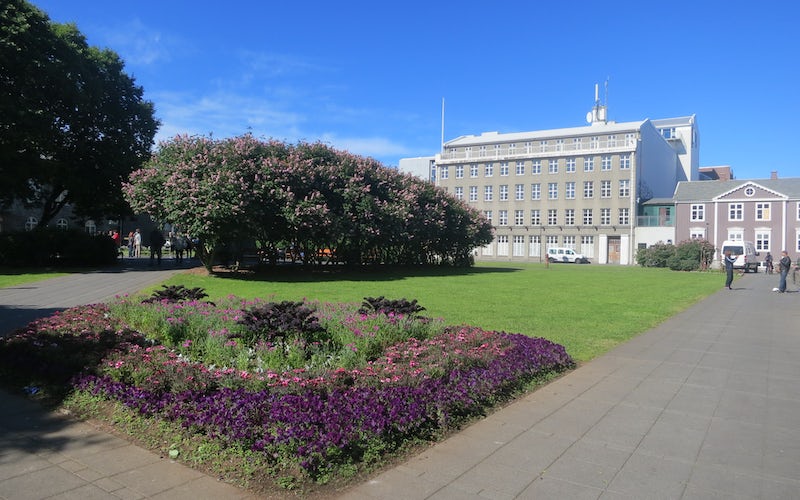 Austurvöllur, the grassy field by the Parliament of Iceland, is probably Reykjavik’s most popular spot on sunny days. There’s nothing special about it in my opinion but it’s very centrally located, which might explain its popularity.

The crowd there is usually pretty young. People don’t usually bring fancy picnic-baskets full of refreshments, they seem to do fine with just beer.

There are a lot of cafés, bars and restaurants all around if you’re feeling hungry. If you want to grab something quick, there’s a 10/11 supermarket just around the corner in Austurstræti and Bæjarins bestu, the famous hot dog stand. 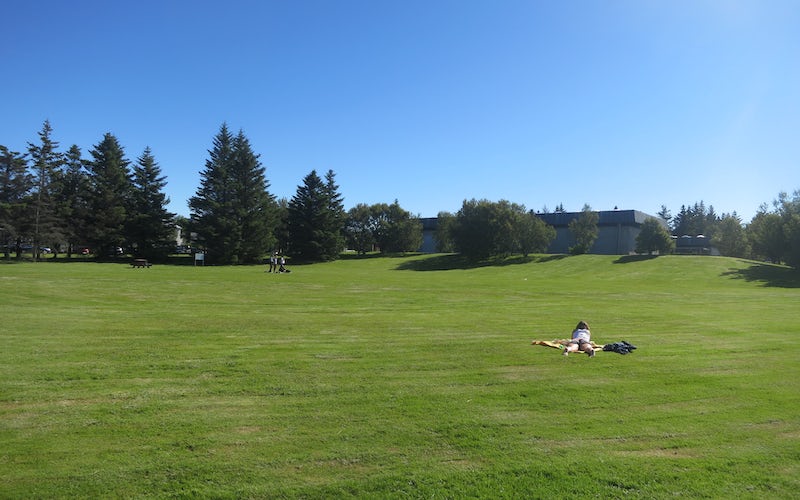 Klambratún, formerly named Miklatún, is a grassy field just east of downtown Reykjavik. It is the go-to place for folfers and aspiring anglers practicing their fly fishing skills.

On sunny days, you’ll mostly see families hanging around at Klambratún. There’s a playground for the kids and a public barbeque.

The field is quite big so you’ll feel very private, even when there’s a lot of people.

The biggest con, in my opinion, is that you have to walk quite far to grab a bite. There aren’t any shops or restaurants nearby, except for the café at Kjarvalsstaðir Museum, but you can grab some ice cream either at YoYo or Ísbúð Vesturbæjar at Skipholt. 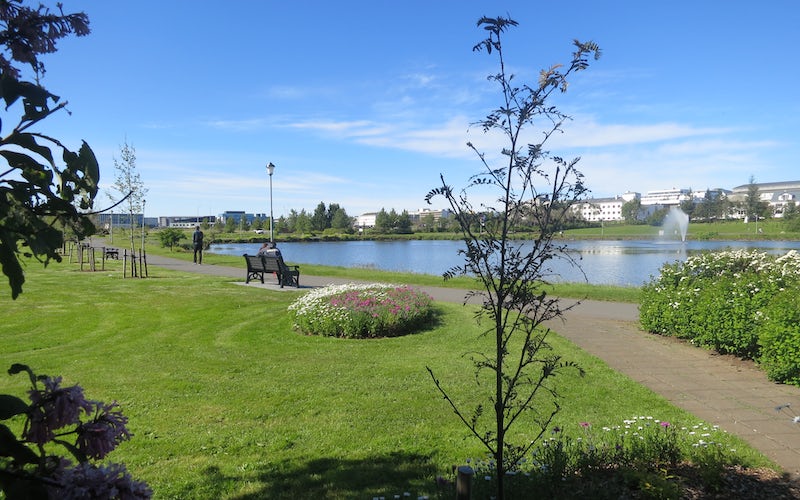 I’ll have to say that of all public parks in Reykjavik, Hljómskálagarðurinn, by the southern end of The Pond, is my favourite. It is pretty large, there are trees and flowers everywhere and it is also very centrally located.

The closest supermarkets are 10/11 in Austurstræti and the N1 gas station in Hringbraut (where you can grab some very nice ice cream or smoothies). 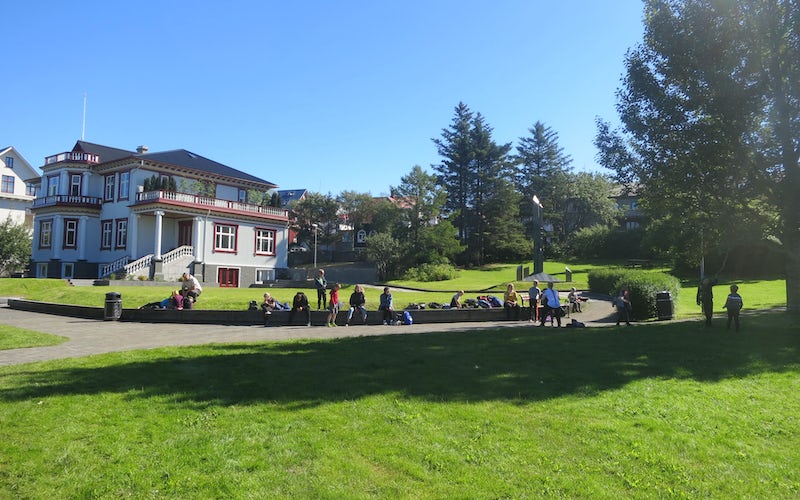 Hallargarðurinn is a small green area, right across the street from Hljómskálagarðurinn. It’s surrounded with beautiful buildings, flower beds and outdoor art.

The most famous landmark of Hallargarðurinn is probably a sculpture called Adonis, by Bertel Thorvaldsen.

Art lovers can also take a look at Ásmundur Sveinsson’s sculpture called Piltur og stúlka, located in the upper part of the park. Even more art is to be found at the National Gallery of Iceland, which is located just a couple of metres away from the park. 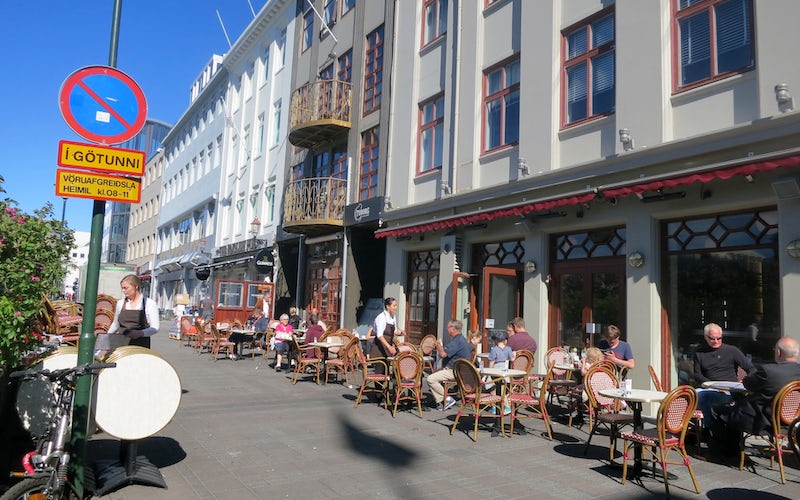 You can't go wrong with Café Paris when it's sunny. Wonderguide/Nína.

Café Paris is located right by Austurvöllur park, by the Parliament Building. On sunny days, the porch outside the café is crowded with people having coffee and relaxing in the sun.

The porch outside is pretty spacious but I cannot guarantee that you will get a table right away when the weather is superb. 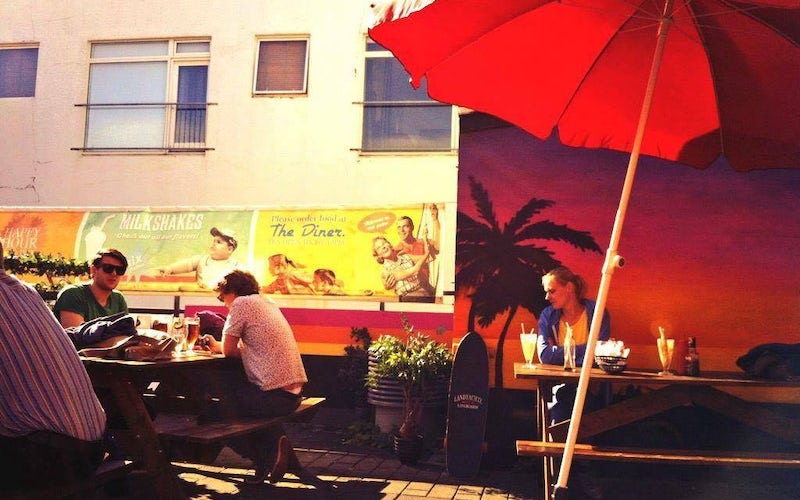 Lebowski bar, located on Laugavegur, is known for its relaxed vibe and great burgers. Few people actually know that there’s a patio on the roof, perfect for lazy afternoons in the sun.

The patio isn’t huge but it’s usually pretty easy to find free tables. Happy hour is from 4 pm to 7 pm.

You can take a look at the menu here. My personal recommendation is the peanut butter & chocolate milkshake, it’s just delicious.

Café Babalú is a quirky café in Skólavörðustígur, downtown Reykjavik. It’s known for its signature cakes and numerous vegan/vegetarian options.

There’s a porch outside on the ground floor and a patio on the top floor. The best thing about sitting outside enjoying a cup of coffee and a decent slice of cake on the porch at Babalú is that few people know about the outside area. It never gets too crowded and it’s usually easy to find a table.

There are unlimited refills on your coffee so you can basically sit there for the whole day! 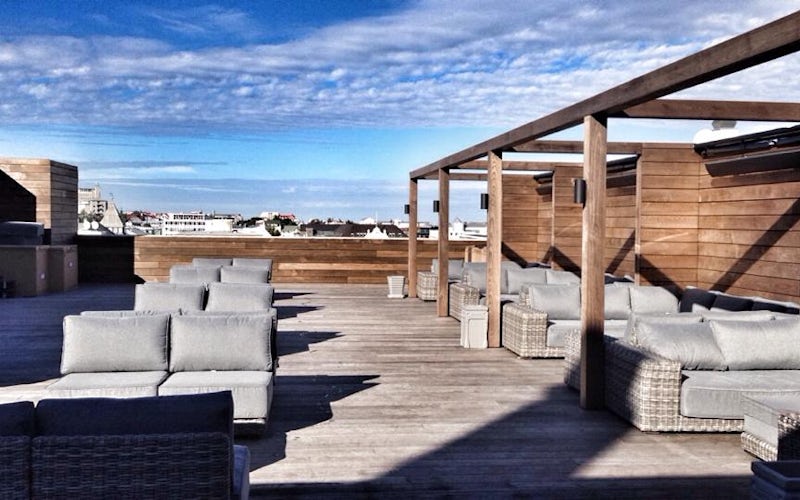 Petersen Svitan is the only proper roof-top bar in Reykjavik. If you’re in the mood for cocktails and some fun in the sun, this is the place you’re looking for.

The view over Reykjavik is fantastic, especially at dusk. It’s possible to get dinner at Petersen Svitan or just drinks. There’s happy hour from 12 pm to 8 pm every day. The perfect spot for coffee on sunny days. Wonderguide/Nína.

Te & Kaffi might actually be the Icelandic substitute for Starbucks, except they have much better coffee. You’ll find Te & Kaffi at most Eymundsson book stores and in other locations around Iceland as well.

I love going to Te & Kaffi for a cup of strong black coffee and something sweet on the side. I usually grab some books or magazines and head straight out to the patio if the sun is shining.

The sun disappears behind some buildings nearby late in the afternoon so it’s not an ideal spot to catch the evening sun. Noon is in my opinion the best time to visit. 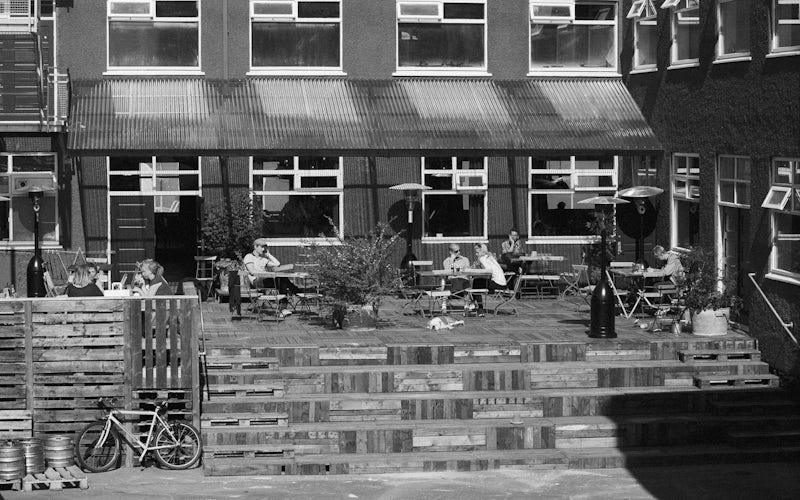 Kex Hostel is one of my favourite places in towns, both for drinks and for food. The patio there is very sunny during the day but few people seem to be aware of that fact.

During sunny days, the hardest thing is usually to be able to ensure a spot at a patio somewhere but at Kex it is the opposite; I would love it if there were just a little bit more people there!

Although it might get a little lonely on the patio at Kex Hostel, the food is amazing. There’s no happy hour, unfortunately. 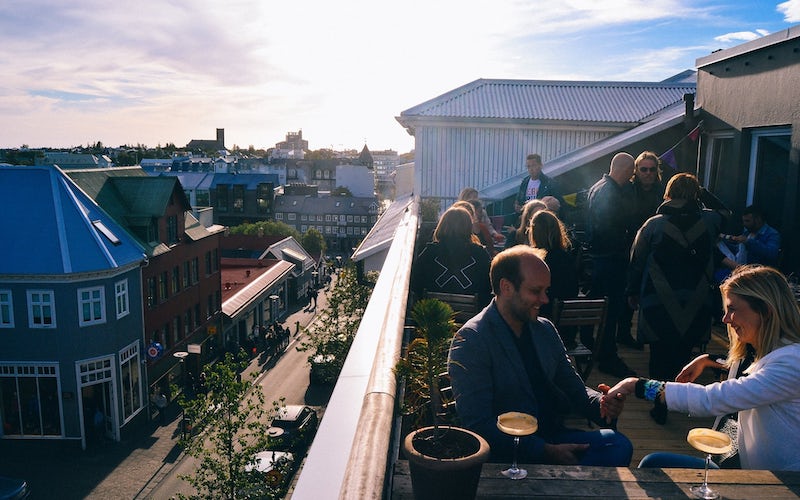 Loft Hostel also has a quite good patio, nice but small. The atmosphere at Loft is very casual and cozy and the drinks are reasonably priced.

The balcony faces the south so it’s very sunny during the day. If you get tired of lingering in the sun and feel like doing something more active, there’s a foosball table inside.

On sunny days I recommend an Icelandic beer called Sólbert. I’ll have to warn hardcore beer-snobs that it hardly tastes like beer, it’s more like radler, if you’re familiar with that drink. Chilling on the balcony at loft with a cold Sólbert (no spons, I promise!) in your hand is just fantastic! 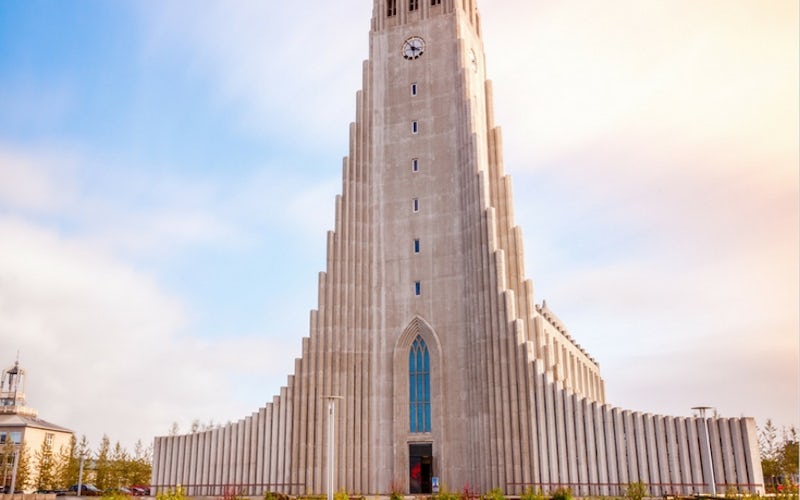 Where Should Book Lovers Go in Reykjavik?
Story

My Top 5 Bucket List Things To Do This Summer
Story

Music Festivals in Iceland During the Summer
Story