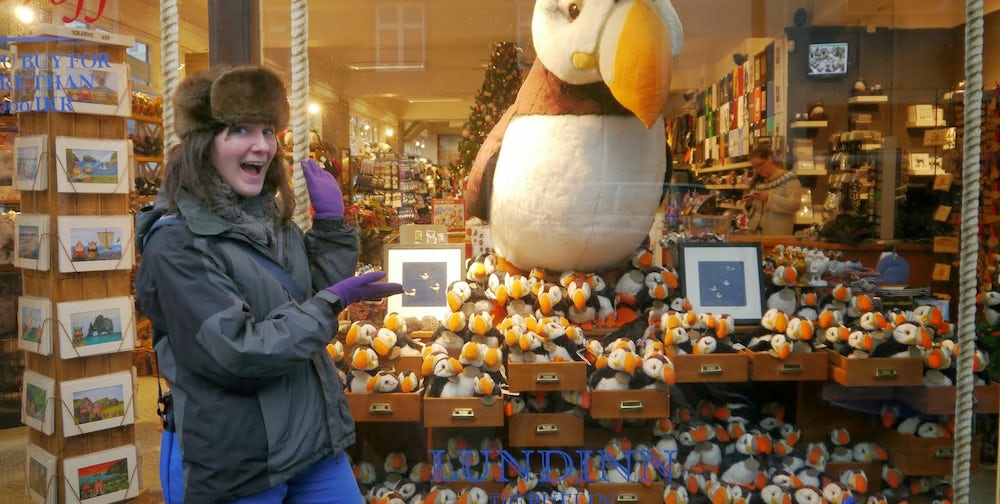 What NOT to Do in Iceland: Tourist Traps and Stuff to Avoid

Falling into tourist traps is probably the most annoying thing about of travelling. I hope this article will teach you a thing or two about the most common tourist traps in Iceland.

The article was updated in April 2019.

I'm a travel writer so I'm used to telling people about some wonderful destinations and exciting activities. I sincerely think that there are countless amazing things that you can do in Iceland and I know that I will never be able to share everything I know about it. Today, on the other hand, I decided to take the time and write about the things you shouldn't do. I know that travellers have different preferences so feel free to disagree with me!

1. Don’t do things just because everyone else is doing it

It’s easy to follow the crowds and book tours to the most typical tourist destinations, especially if you don’t have much time on your hands. Doing a little research before planning your trip can certainly pay off. Are you so sure that the typical tourist-routes in Iceland are something you want to do? 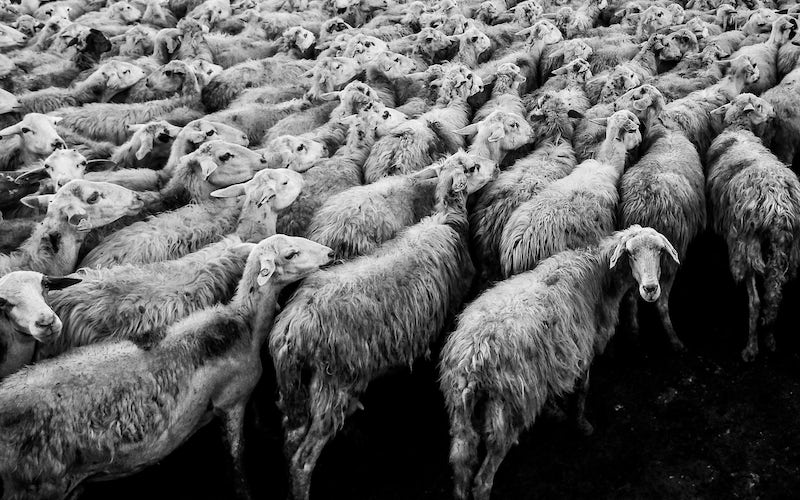 A herd of sheep heading in the same direction. Wonderguide/Pexels.

2. Don’t assume that everything you’ll do in Iceland will be expensive

I know that staying in Iceland can be pretty expensive. You will probably spend a handsome amount of money on food and accommodation, and perhaps on transport too. Some tourists that visit Iceland also spend a fortune on tours, day trips and other activities and do not realise that there are so many things in Iceland you can actually do for free. Exploring on your own will save you loads of money and it also allows you to be independent while you're travelling.

I’m not saying that you should necessarily do everything on your own, especially if you generally like guided tours. In my opinion, a combination of tours and independent travel is absolutely the way to go in Iceland.

Hiking and bathing in natural geothermal pools are two of my favourite activities in Iceland and both are free. Use Wonderguide to find out about the best hiking trails and the nicest thermal pools and save money by going on your own! 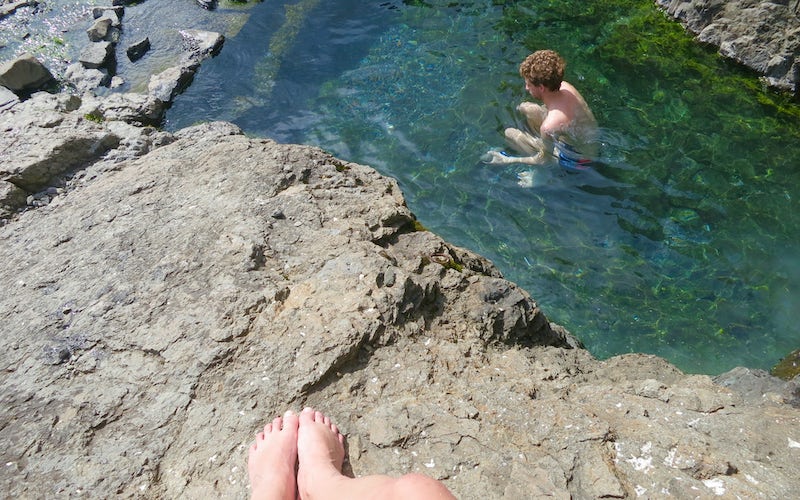 Lounging in the Hellulaug thermal pool doesn't cost anything. Wonderguide/Nina.

I’ve heard many tourists complain about high prices in restaurants in Iceland. Don’t spend more money than you need to by tipping the staff (unless you're really happy about the service and feel the need to tip). However, the etiquette for tipping in Iceland is simply “no tipping”. 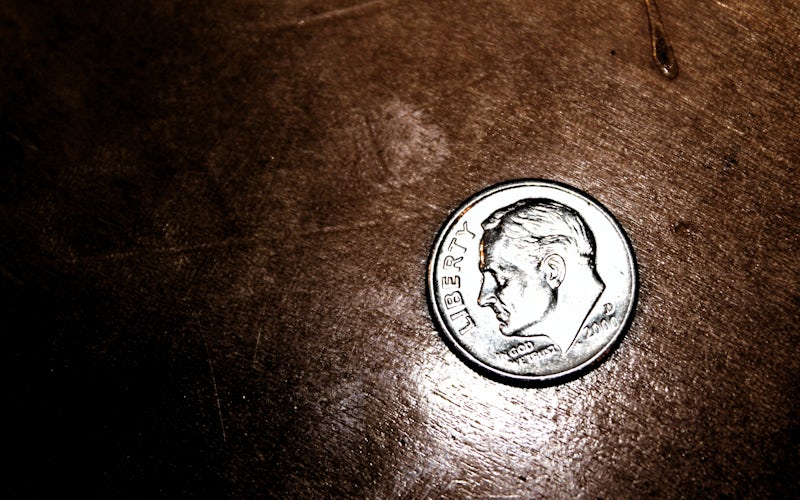 Waiters in Iceland don't expect to be tipped. Wonderguide/Pexels.

The tap water in Iceland is as clean as water can get. By buying water bottles at the supermarket, you’re basically buying bottled tap water.

Pro tip: You are never charged for a glass of water at restaurants. 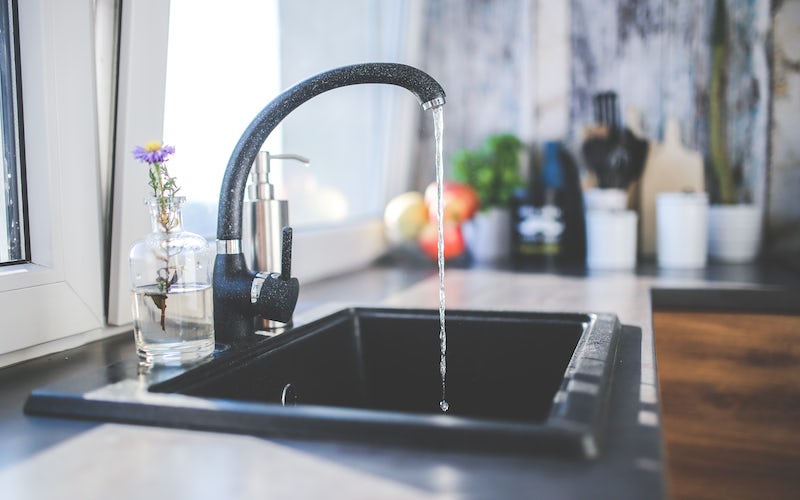 5. Don’t expect that you can see everything during your stay

Iceland may not look very big on a map and I know that some tourists think they can “cover” all the major highlights of Iceland in one trip. This is not possible unless you're staying for months. As you might know, the population of Iceland is just over 300,000 people and that of course means less urban areas and more nature.

Unless you will be travelling for weeks, I recommend that you select one or two regions for your first trip and then just come back to explore other parts of the country. 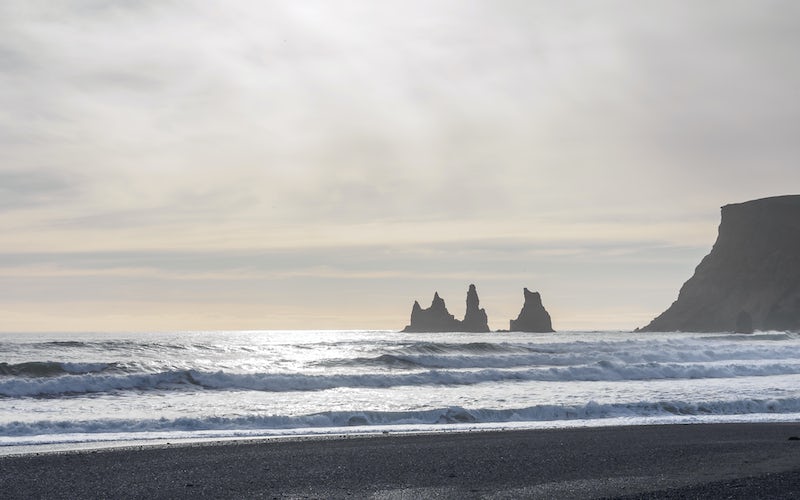 Many people drive along the south coast on their first trip to Iceland. Wonderguide/iStock.

There are no highways in Iceland and the speed limit never exceeds 90km/h. Speed cameras are widespread across the country, both in the city and in the rural parts of Iceland. The narrow roads in the rural parts really do not allow for greater speed than 90km/h, driving much faster than that is just plain dangerous. 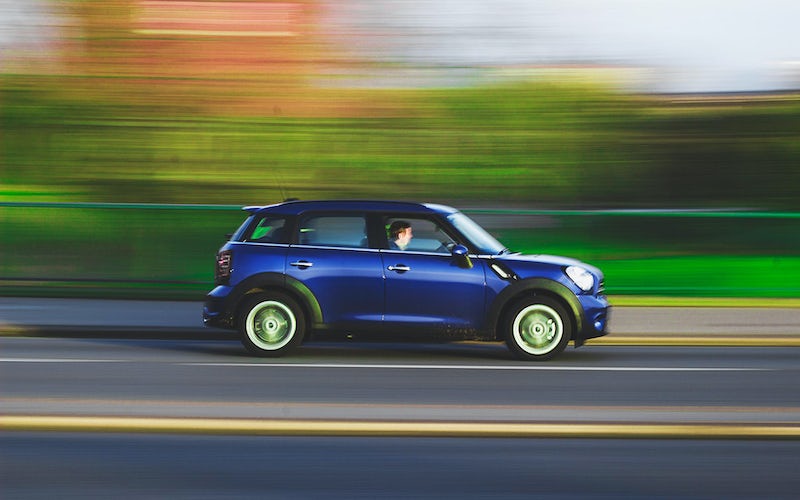 During the spring and summer in Iceland, the sun sets for just a few hours each night. Although the bright Icelandic nights do have their appeal (I’m a big fan myself) I’ve heard tourists complain about having a difficult time sleeping.

Most hotels do have blinds and good curtains but sometimes that’s simply not enough. You won’t regret bringing your sleeping mask when you find yourself waking up at 3am because bright rays of sun have somehow found their way through a small chink in the curtains!

If you will be camping during the summer, bringing a sleeping mask is a must. I once forgot mine at home when I went on a camping trip and I ended up tying my scarf around my eyes, which wasn’t very comfortable. I suggest bringing earplugs too, especially if you are camping near waterfalls or rivers. Some find that kind of noises soothing but I really don’t. 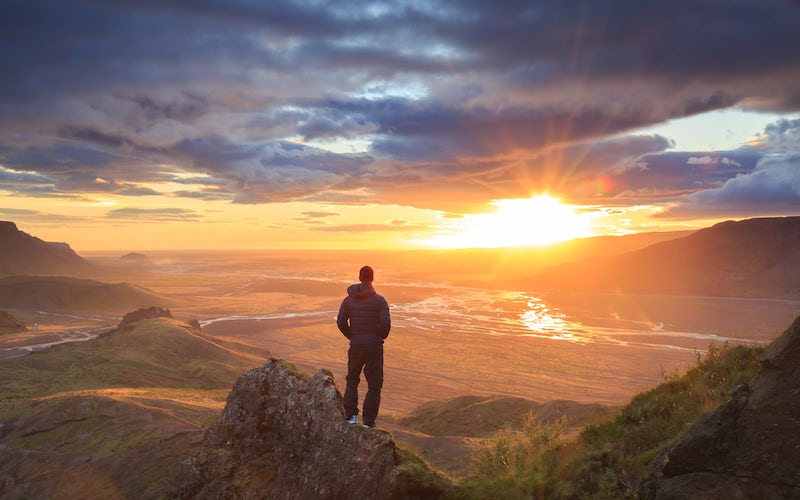 The midnight sun in Iceland is stunning...unless you're trying to get some sleep! Wonderguide/iStock.

I’m not a big fan of buying memorabilia while travelling but I understand people who are. It’s nice to surprise the kids/grandkids with gifts when you return from your vacation and it can also be nice to buy souvenirs for yourself to remind you of the wonderful time you had during your trip.

There are countless souvenir-shops in Reykjavik and I can testify that some of these shops are selling mass-produced plastic trolls or puffin dolls imported from China instead of selling something locally crafted. The worst thing is that these mass-produced souvenirs are sold at insanely high prices to tourists that just want to bring something nice to their kids.

I think you should select your souvenirs carefully, or even buy something that is not specifically marketed as memorabilia. What about investing in Icelandic art, literature or design instead? You could also go to Kolaportid Flea Market or one of Reykjavik’s thrift stores to find some rare authentic gems; these places have a great selection of Icelandic wool sweaters sold at a pretty decent price. 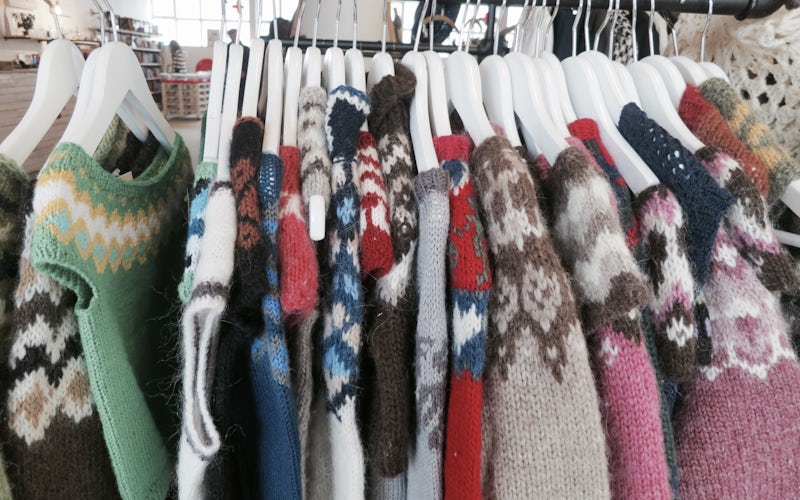 The Blue Lagoon remains one of the most popular tourist attractions in Iceland. But is it a tourist trap? While some may say that it isn't really worth your time or money, others do in fact like it a lot. I actually really liked it the last time I went, more than a decade ago but that was in the good old days where you didn’t have to book in advance and the entrance fee was reasonable.

The point I’m trying to make here is that The Blue Lagoon isn’t for everyone. I’ve heard tourists calling it a paradise on Earth while others describe it as a textbook example of a tourist trap. If you don’t mind the crowds and the high entrance fee I definitely think you should go. If not, you can find tons of swimming pools and natural thermal pools that are great alternatives to the Blue Lagoon. The Mývatn Nature Baths, located in North Iceland, are very similar to the Blue Lagoon although they aren’t nearly as famous.

Read also: The Blue Lagoon: Everything You Need to Know 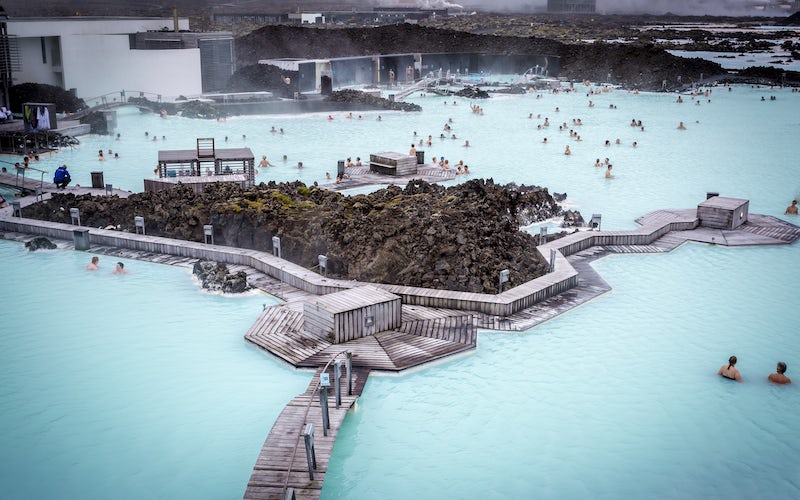 It can get pretty crowded at the Blue Lagoon. Wonderguide/iStock.

If you're still weighing the pros and cons of visiting the Blue Lagoon, check out the video below. Just note that the airline he mentions, Wow Air, is sadly not operating anymore.

10/11 is probably the most common supermarket in Reykjavik and I bet there’s going to be one located very close to your hotel. These stores are open 24/7, which is very convenient, and they do have a lot of options for quick bites you can grab while you're on the go.

If you intend to do some serious grocery shopping, I advise you to do it elsewhere. The price for groceries is extremely high at 10/11, probably twice as high as in Bónus, Krónan or other budget-friendly supermarkets. If you want to know more about the best grocery stores in central Reykjavik, check out this article . 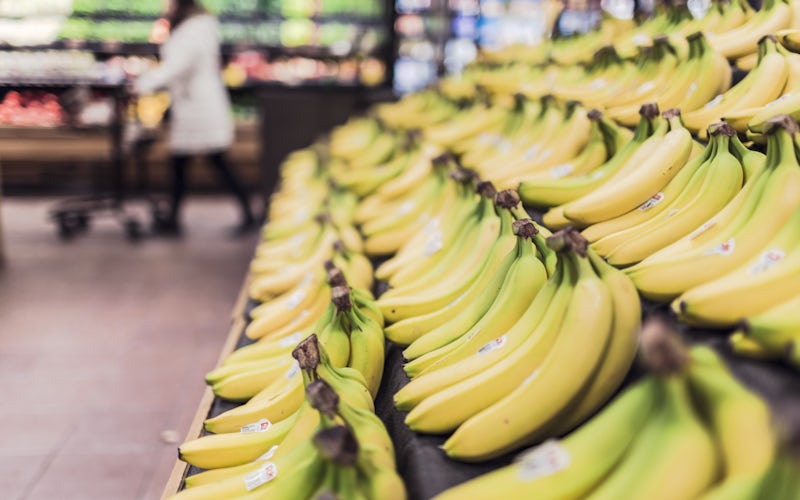 The prices at 10/11 will make you go bananas. Wonderguide/Pexels. 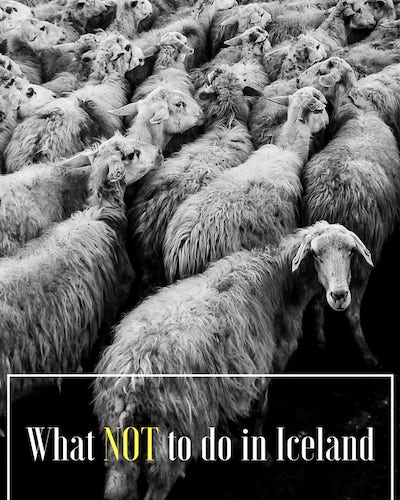 Into the Glacier Classic Tour | Meet on Location
Experience·$153