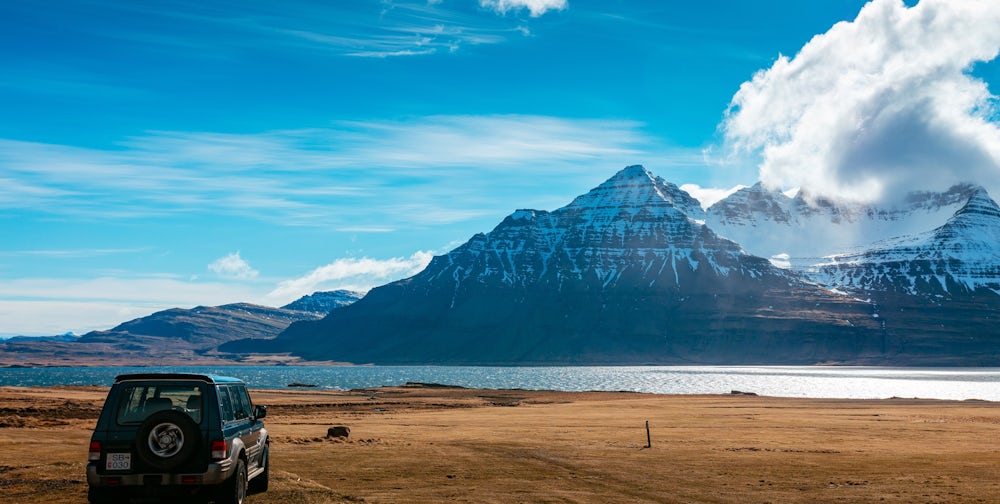 What to Do in Iceland in April

Are you visiting Iceland in April? Here are some ideas for things to do and see in this bright and beautiful spring month.

There are a lot of events and festivals in April, although there’s not as much going on in this lovely spring month as during the summer. A lot of the events that are covered in this article are running events, so runners visiting Iceland in April are in for a treat. There are also some very interesting culture and music events, including the fantastic “Aldrei fór ég suður” music festival in Ísafjörður. But the bottom line is that everyone should find something that appeals to them.

The weather is also slowly getting a bit better and the days are significantly brighter. The average temperature for April in Reykjavik is 40 F rising to 45 F by the end of the month. You might get some sunshine in April if you're lucky but you shouldn't count on it. The only thing that's predictable about the weather in Iceland is that it's unpredictable!

April is definitely not high-season when it comes to tourism and therefore you really don't have to worry about huge crowds or no vacant hotel rooms. If you've chosen to spend some time in Iceland in April, here are some events you might check out as well as some tips on tours, activities and bank holidays in Iceland. 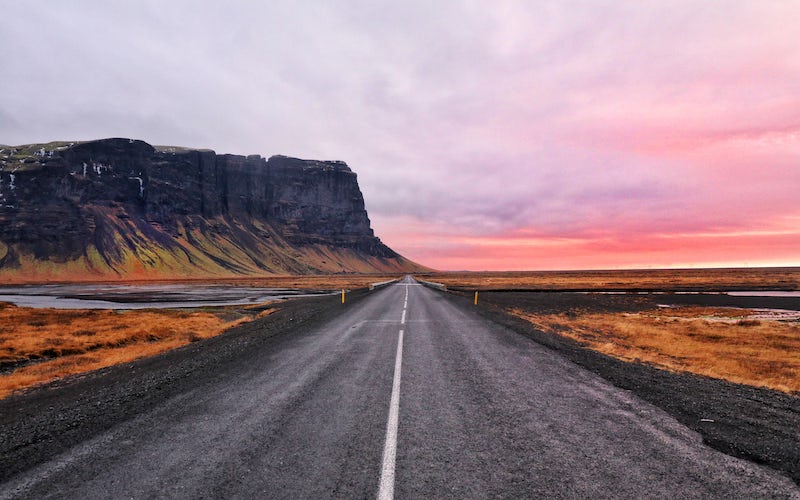 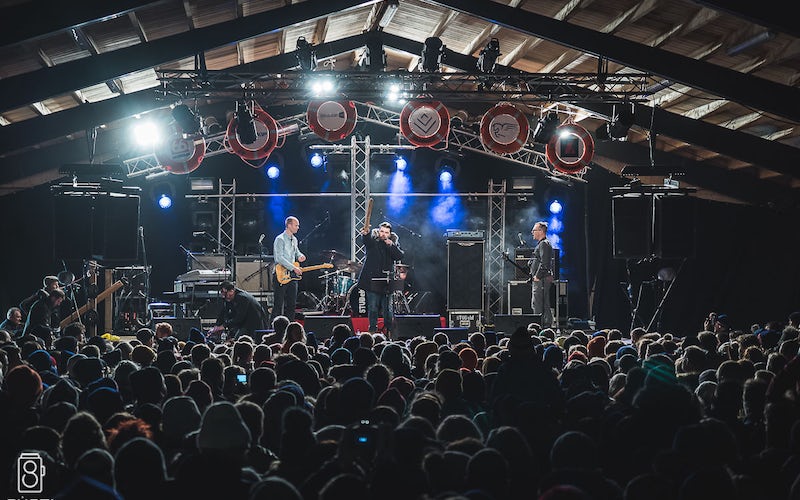 Aldrei fór ég suður is one of Iceland’s coolest and most authentic music festival. It takes place every Easter, so it’s usually in April (sometimes in March).

Aldrei fór ég suður (which translates into “I never went south”) was held for the first time in 2003 and has been an annual event since then. The founders of the festival are Mugison , one of Iceland’s most beloved musicians, and his father, nicknamed Papamug.

The festival takes place in Ísafjörður , which is the largest town of the Westfjords of Iceland. Ísafjörður is in my opinion one of Iceland’s prettiest towns and most definitely worthy of a visit.

You can read more about the festival here . 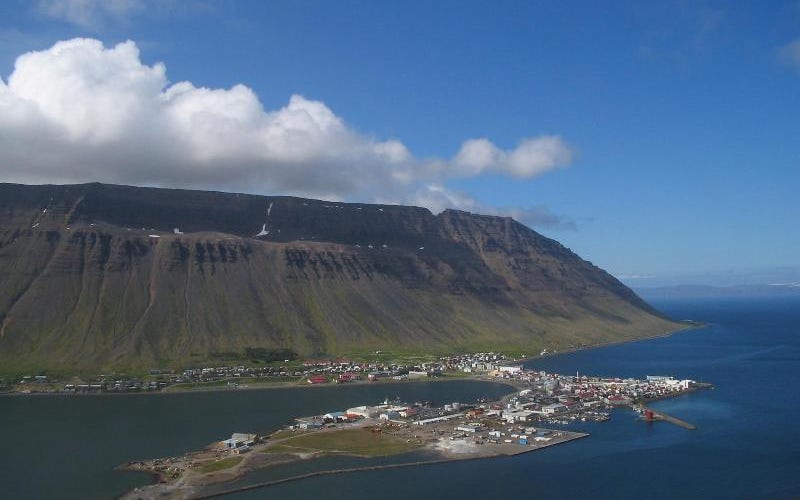 There is a domestic airport in Ísafjörður so you can fly there non-stop from Reykjavik domestic airport. The flight takes under an hour. Driving to Ísafjörður is also possible and takes around seven hours. Make sure that you check the road conditions before you hit the road.

HEIMA is a local music festival in Hafnarfjörður, a small town in the vicinity of Reykjavik. It’s a one day event, but actually it’s a part of a bigger arts festival called Bjartir dagar.

The HEIMA festival (which translates to “AT HOME”) is indeed a very homey festival, celebrated mostly by the residents of Hafnarfjörður. Some of the villagers turn their homes into concert venues for the festival, which makes the experience truly authentic.

The line-up for this year is all-Icelandic and clearly intended to appeal to all generations. Some artists, such as Bjartmar Guðlaugs and Valgeir Guðjóns, are well into their sixties while the wunderkind duo JóiPé x Króli are still in high school.

You can buy tickets here .

The best thing about April in Iceland is that you can easily combine Northern lights-hunting with other activities that can’t be done in the midst of the cold winter. If you want to jump right to browsing through the best tours we have to offer for April, click here . 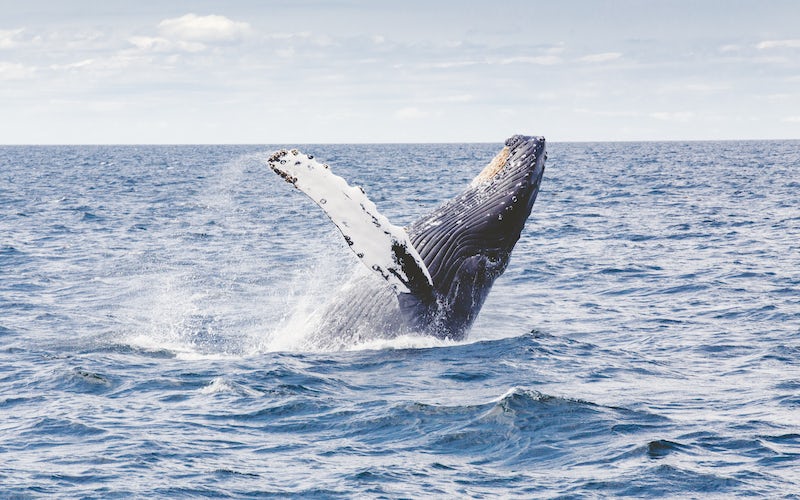 April marks the start of the high-season in whale watching. The whales are returning back to the seas of Iceland after a winter of breeding in warmer waters. Therefore it is generally a good month for whale watching and the chances of sighting whales increase by every day.

Here are some whale watching tours to check out if you want to book now. 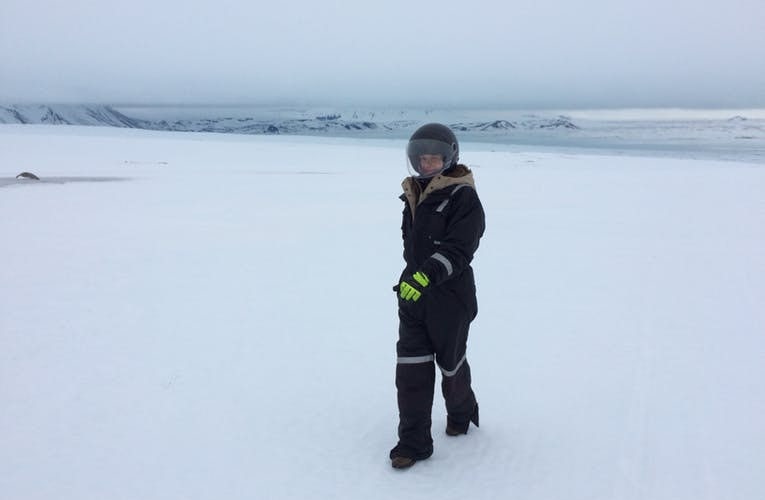 Although there might not be any snow in Reykjavik, there’s always plenty of it up in the mountains. Glacier-hiking is an activity that you can do all year round in Iceland. The shoulder season is good for this activity since it’s already brighter and a bit warmer. It’s also easier to book a spot and less crowded.

It’s not recommended to go glacier hiking by yourself since there are a lot of crevasses in the glaciers. You have to be accompanied by an experienced guide. Click here to check out glacier hikes recommended by the Wonderguide team.

Snowmobiling is also an year-round activity and it can be done on several glaciers in the southern and western regions of the country. There are some tours that combine snowmobiling with other activities, such as sight-seeing. One of our writers went on a day tour that combined the Golden Circle route with snowmobiling, you can read about her experience here .

Snowmobiling is not suitable for kids and most tours require you to present a valid driver’s licence. 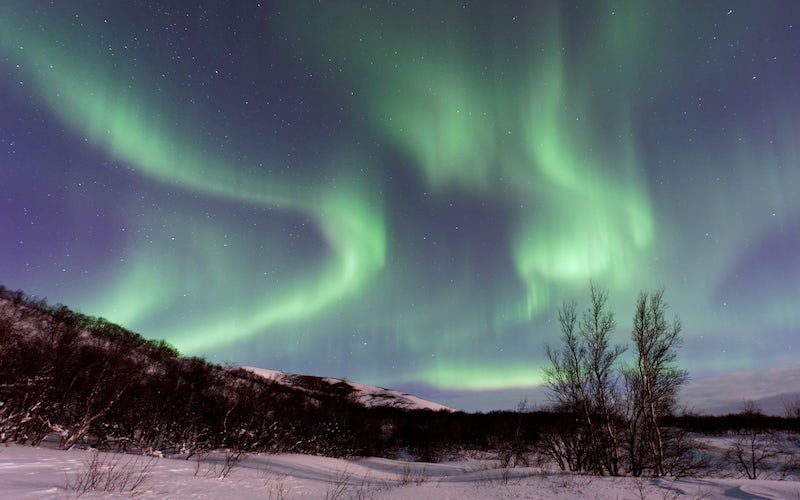 You might spot Northern lights in April if you're lucky. Photo: Unsplash/Vincent Guth.

Northern lights can still be seen in April, especially in early April. The days keep getting brighter and in April the evenings are actually pretty bright already. The Northern Light-season in Iceland lasts until mid-April, so early April is really the last chance to witness this gorgeous phenomenon.

I recommend using the Northern Light Forecast if you intend to go Northern Lights hunting on your own. If you prefer a guided tour, you can still book most of them until the 15th of April. Browse through our large selection of Northern Light tours here .

April is without a doubt one of the best months to go skiing in Iceland. There’s still snow in the mountains and the dark winter days are over. Many families use the Easter vacation to go skiing, either in Bláfjöll (near Reykjavik) or Hlíðafjall in Akureyri (North Iceland).

If you want to read more about skiing in Iceland, I recommend this article .

Runners don’t have any excuses not to go out on the streets to train in April. The weather has gotten much better and the evenings are bright and lovely. Those who are planning on taking part in the Reykjavik Marathon in August will have to start training soon, but those who are eager to take part in other running events earlier have plenty to choose from. 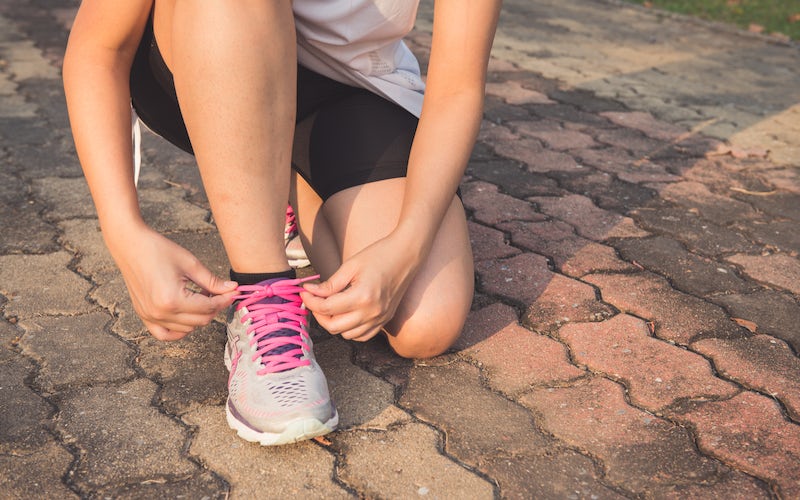 It's time to put on your running shoes. Photo: Pexels.

Flóahlaupið takes place in Gaulverjabær near to the town of Selfoss in the south of Iceland. You can choose from three distances: 3k, 5k and 10k.

This is a small local event and perfect for runners who are traveling in the area. You can sign up here , the participation fee is only 3000 krónur.

Víðavangshlaup ÍR is a running event that takes place in Reykjavik. It has been an annual event since 1916.

The running route is a nice 5k circle around the city center. You can also opt for a 2,7 if you’re more into shorter distances. You can sign up here .

Hjörleifshöfðahlaupið is an 8k long race that circles around Hjörleifshöfði in the southeastern part of Iceland.

Hjörleifshöfði is a 725 ft. tall inselberg located in Mýrdalssandur outwash plain. This majestic cape, that towers over the surrounding black desert, is significant in terms of history and plays a part in the settlement of Iceland. You can read more about it here .

The participaton fee is just 2500 ISK and there’s soup for everyone after the race. You can sign up here .

This is a proper long distance-running event, offering only half or full marathon. The event takes place in Reykjavik, starting in the Elliðaárdalur Valley. You can sign up here .

For those who don’t know, Eve Online is a popular online role-playing game, developed and published by the Icelandic video game developer CCP-games.

At the annual Eve Online Fanfest, Eve-enthusiasts gather together in Reykjavik to celebrate their favourite hobby. During the festival, there will be presentations, tournaments and even a parade.

You can buy tickets for the 2018 festival here .

The Children’s Culture Festival was first held in 2010 and has been an annual event since then. The festival is dedicated to children and youngsters under sixteen years old and focuses mostly on workshops and performances. 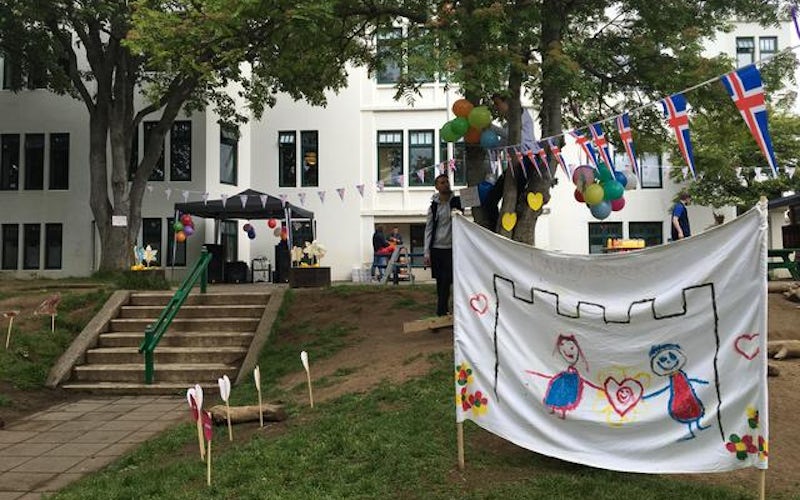 The festival stretches over six days and the program is packed with various events and workshops. On this year’s schedule, there’s an exhibition celebrating children’s rights, an award ceremony for the best young composer, an exhibition showing photos of Star Wars lego structures made by children, color workshop for babies and a number of other interesting events. You can take a look at the program here .

The Iceland Writers Retreat was held for the first time in April 2014 and has been growing steadily ever since.

This is a five-day retreat where writers of all genres, from all around the world gather together to write, learn and meet other writers. There’s also plenty of time to explore the vibrant culture scene of Reykjavik and day tours from the city are even scheduled. The faculty consists of prolific writers from all over the world.

It is necessary to register online if you’re interested in joining the Iceland Writers Retreat. You can find out more here .

AK Extreme is a four day snowboarding and skiing festival in Akureyri, the largest town of the northern region of Iceland.

The focus is on snowboarding, especially some crazy high jumps, but other events and concerts are also a part of the festival. You can check out their website here . 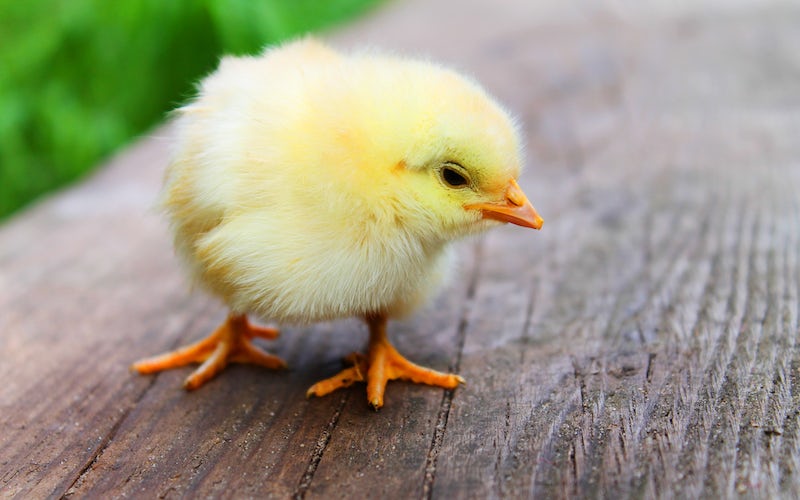 Icelanders are officially a Christian nation and therefore we celebrate Easter every year. The holiday is quite long, it starts on Maundy Thursday and lasts through Easter Monday. Icelanders traditionally cook lamb on Easter Sunday and eat chocolate eggs, just like most of their neighbours.

If you’re visiting Iceland during Easter, it’s good to know when shops, supermarkets and restaurant are closed, you can check that out here . If you want to buy some alcohol, you should be aware that the state run liquor stores are always closed on bank holidays.

The first day of summer

The first day of summer has been celebrated since the settlement of Iceland. According to the old Norse calendar, the year was divided into only two seasons; winter and summer. The first summer month, Harpa, started in mid-April and therefore Icelanders welcomed this warm and bright season with a big celebration in April.

Icelanders still celebrate a great deal during the first day of summer, namely with parades and local family-friendly festivals. I recommend that you check this article out if you’re interested in joining the annual celebrations.