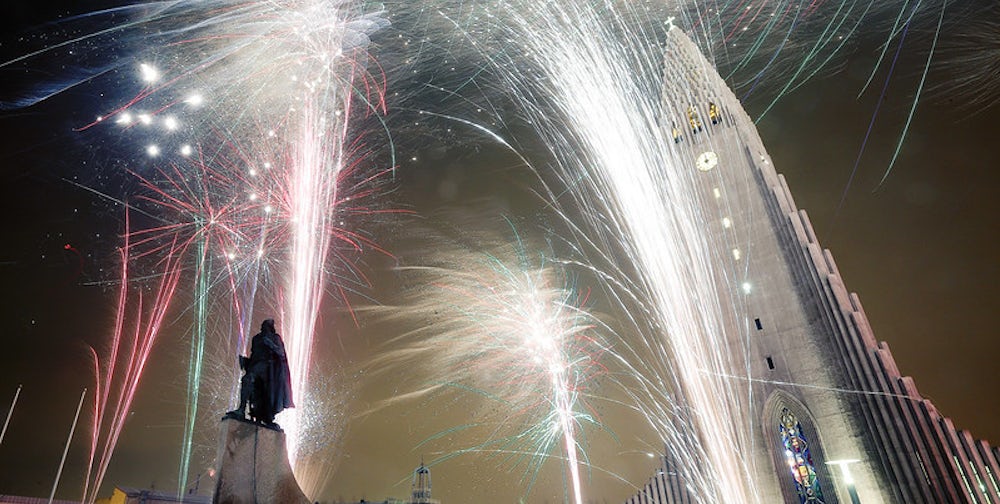 The Proper Way to Celebrate New Year’s Eve in Iceland

The holidays are characterised by customs and traditions. And naturally, we all have different ideas about how to celebrate Christmas and New Year’s Eve, influenced by our background and nationality. I’m aware that his makes celebrating the holidays away from home a bit tricky so I’ve written a piece on how most Icelanders celebrate New Year’s Eve, in case you decide to ditch your own customs and follow the example of locals.

Icelanders are Christian, which means that we celebrate New Year’s Eve on December 31 like most European countries. Unlike Christmas Eve, when dinner is served at precisely 6pm, New Year’s Eve is a bit more laid back. For instance, it is quite common for Icelanders to celebrate with friends instead of family on New Year’s Eve. After all, it is the most important event of the Christmas holidays for the party animals among us.

New Year’s Eve parties in Iceland usually take place in people's homes. Because of that, there isn’t very much going on at restaurants and clubs. This is bad news for foreign visitors who aren’t invited to anyone’s home during the festivities, but I will try my best to tell you about the options you have later in this article. 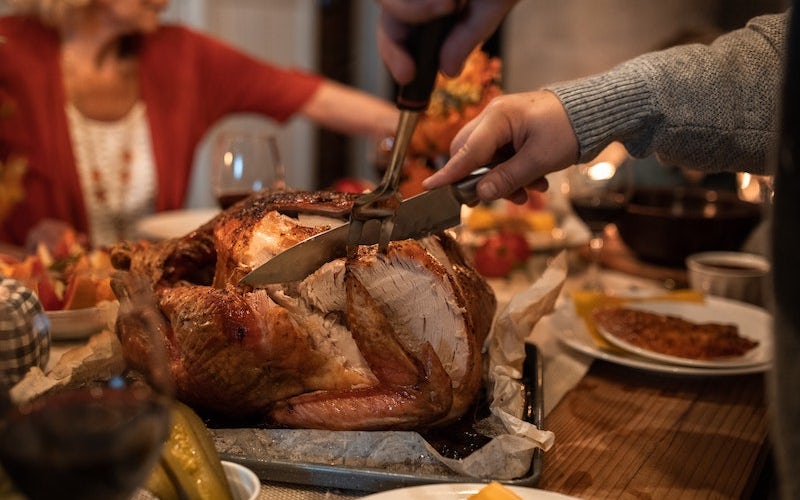 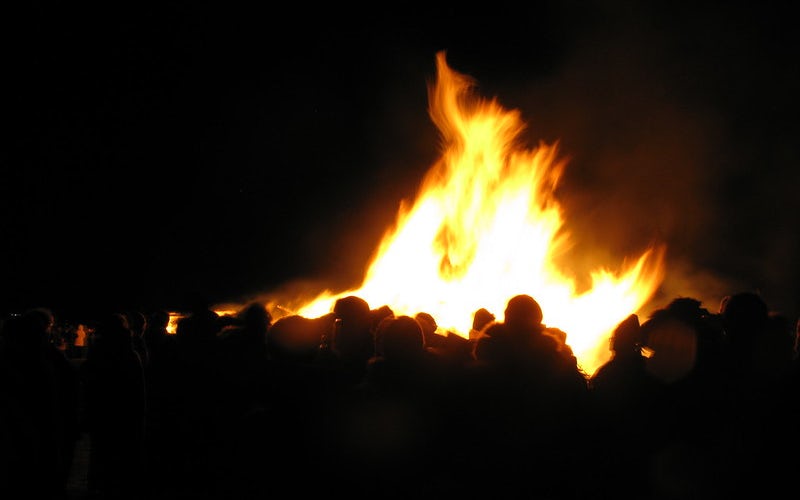 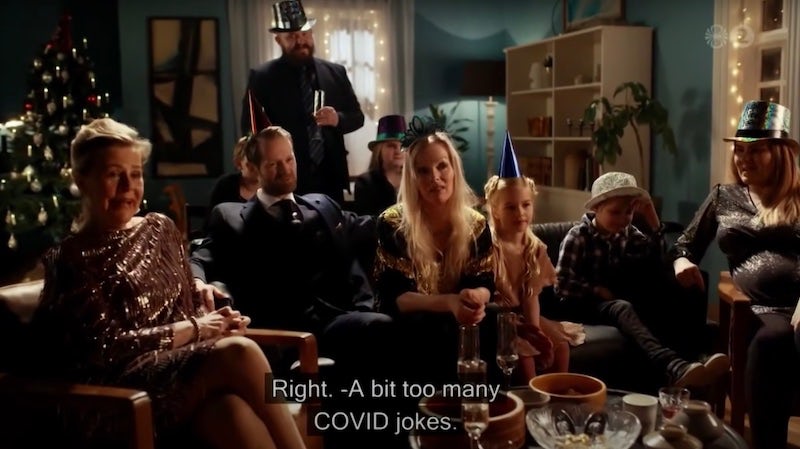 Typically, dinner in private homes is served at around 7 pm. Turkey is a popular choice for main course, but there are plenty of other trends as well, such as Beef Wellington and a type of ham called Hamborgarhryggur. After dinner, many people attend local bonfires where they run into neighbours and acquaintances.

It’s important not to stay too long at the bonfire because the most important New Year’s custom in Iceland is a TV-program that is aired around 11 pm. The program is called Áramótaskaupið and is watched by more than 70 percent of the nation. Written by the country’s most popular comedians, the program wraps up the main events of the year in several short sketches.

Few Icelanders choose to eat out on New Year’s Eve which is why it tends to be somewhat difficult to book a table at a decent restaurant. Many restaurants are closed during Christmas and New Year’s Eve, while others quickly become fully booked. 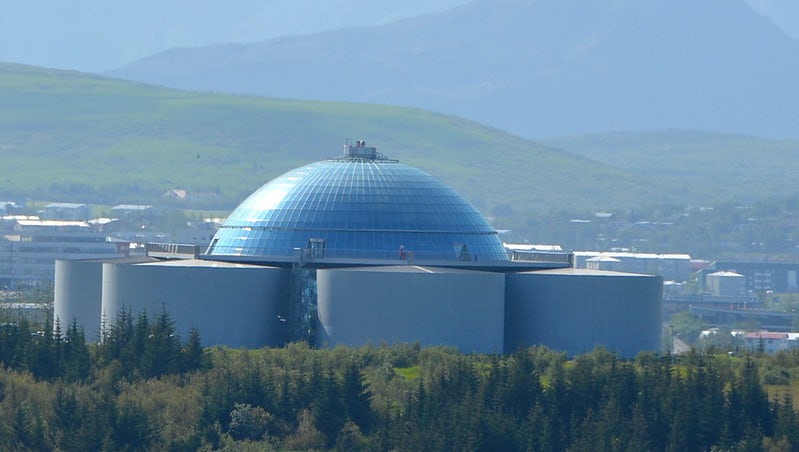 Perlan is one of the most interesting buildings in Reykjavik. Flickr/Adam Fagen.

However, Perlan Restaurant, offers a program for the whole evening, including a four-course dinner. The evening starts with welcome drinks at 6 pm and the dinner is followed by live music performances and sparkling wine on the observation deck at midnight, where you get a fabulous view of the fireworks. The event tends to get sold out pretty quickly, so make sure to book in advance.

Other restaurants that are open on New Year’s Eve (I’m writing this in 2021) and I can recommend are:

How to survive/enjoy the firework frenzy

Icelanders have a reputation for going absolutely mad when it comes to fireworks on New Year’s Eve. I’ve heard about people who easily spend thousands of dollars on fireworks every year. Tourists have described the situation as the craziest they’ve ever witnessed and some kids get so scared that they refuse to leave their room. 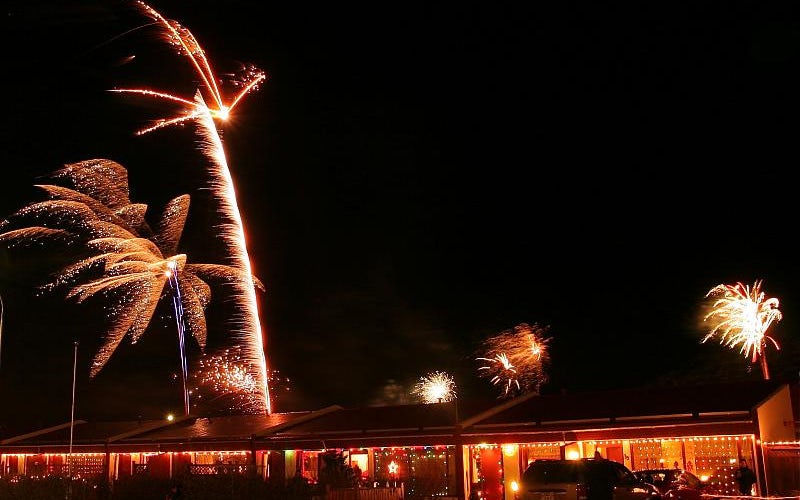 Fireworks in a residential area in Reykjavik. Flickr/Rögnvaldur Jónsson.

The fireworks start early in the evening, but the frenzy reaches its peak at midnight. Whether you’re eating at home with friends or at a restaurant, I strongly recommend going to a place where the view over the city is good at midnight. This allows you to view the spectacle without directly participating in the madness. Here are a few places that are quite popular to visit at 12 pm on New Year’s Eve. They all offer a good view of the city.

Fireworks can be bought at pop-up shops all around the city from December 28 to December 31. Most of them are run by the Iceland Association for Search and Rescue, which means that the profit is used to support a good cause. Make sure you buy a pair of safety goggles if you intend to light the fireworks yourself. Be cautious and always follow safety instructions closely.

After midnight: Time for bed or more partying?

I have spent New Year’s Eve in several different countries, and based on that, I would say that Icelanders are generally quite eager to keep the party going after midnight in comparison to other nations. As I previously mentioned, house parties are common and friends tend to celebrate together with plenty of food and wine.

Going to a bar or a club after midnight is also an option, as they are normally open until 5 am. If you’re lucky, you might even end up in an after-party somewhere and go to bed when it’s usually time to wake up. If you’re not much of a night-owl, you are certainly excused to go to bed earlier. New Year’s Eve celebrations are usually quite relaxed, which means that playing it by ear is totally acceptable.

Christmassy Things to Do in Iceland in December
Story

Things to Do and See in Iceland in December
Story

Things to do in Iceland in December and January: Travel Guide by a Local
Story