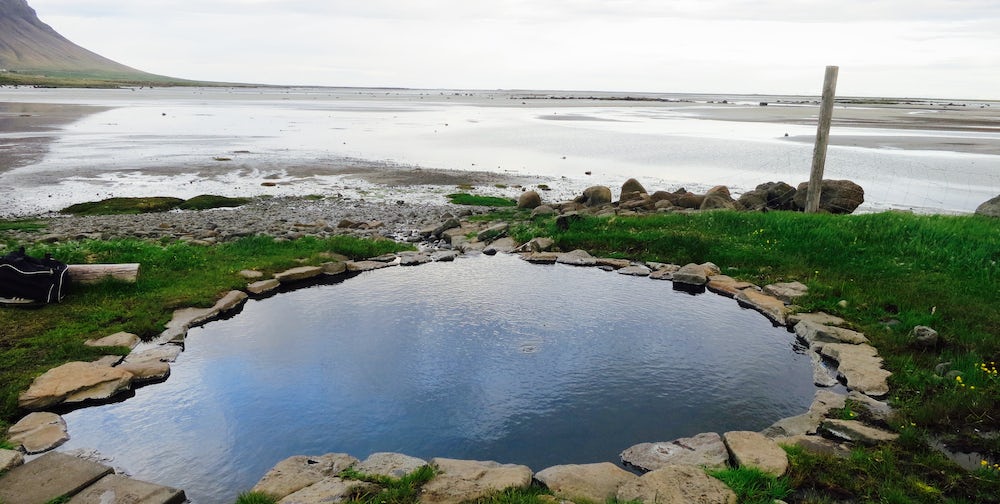 The Krosslaug Geothermal Pools in the Westfjords

The Westfjords of Iceland are largely off the tourist radar, perhaps because it's not a part of the famous Ring Road of Iceland. If you do visit, make sure to check out the Krosslaug geothermal pools in the southern part of the peninsula.

Krosslaug refers to two geothermal pools close to the Birkimelur Settlement in the southern part of the Westfjords of Iceland. According to Thermal Pools in Iceland, which is by the way a great book for natural-bathing enthusiasts, the concrete swimming pool was built by the local youth association in 1948. The other one is a more “natural” looking hot tub, near to the seashore.

The concrete swimming pool was reconstructed several years ago. There was a fence surrounding it but that has been torn down now, to enable the ocean-view I guess.

Both the concrete pool and the “hot tub” are filled with warm water, around 100°F. The view from both the pool and the hot tub is magnificent—if the sky is clear you might be able to catch a glimpse of Snaefellsjokull Glacier which is located in Snaefellsnes Peninsula on the other side of the fjord. 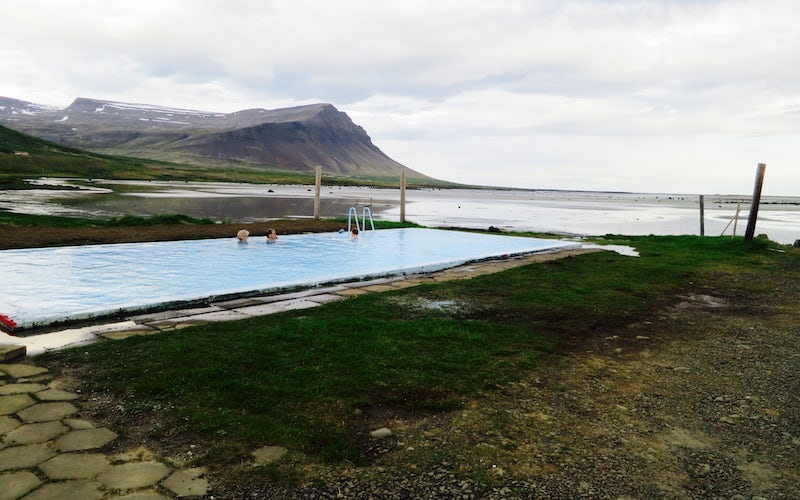 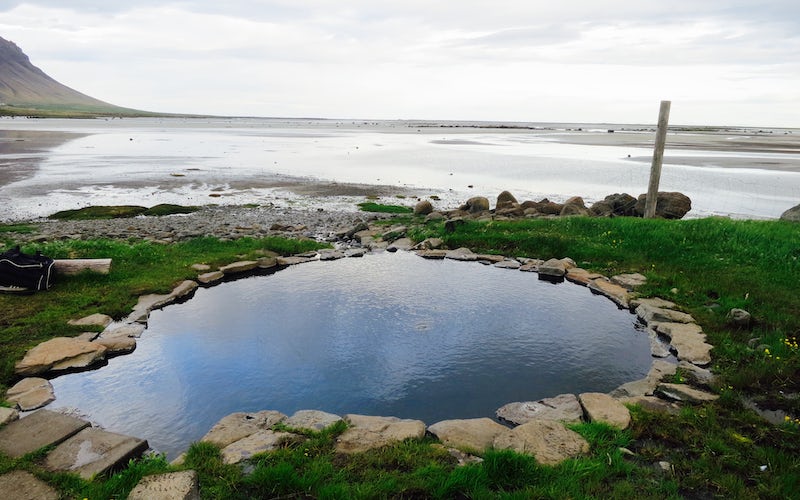 Is Krosslaug really in the Westfjords? According to Google, it seems to be located somewhere else...
There’s an explanation for that. There are in fact (at least) two pools in Iceland that are named Krosslaug. The other one is in the Reykir area West Iceland. That one is indeed a lot closer to Reykjavik but I can’t tell you much about it because I haven’t been there yet.

Are there some other interesting attractions in the area?
Totally. Hellulaug geothermal pool (one of the coolest natural pools in Iceland) is close by and so is the Latrabjarg Cliff and Raudisandur Beach. I am actually amazed by the fact that the Westfjords are seeing way too few tourists during the summer in comparison to other regions of the country. It is in my opinion it’s one of the most beautiful places in Iceland. I wrote about my road trip to the Westfjords the other day, if you want to follow that itinerary you can check out my article.

Is it crowded?
No, not really. There were three people in the pool and nobody in the hot tub when I went there in early June. I would absolutely label Krosslaug as a hidden gem rather than a tourist attraction.

Is it possible to get there by using public transport?
No, I am afraid that’s not possible. You can go by bus to Stykkishólmur and then take the ferry to Brjanslaekur but it’s going to be difficult to travel the south coast of the Westfjords without a car.

If you’re thinking about how to get to the Westfjords from Reykjavik, you have two options, assuming you’re driving your own (rental) car. You can either drive the Ring Road, then take Road 60 and then drive Road 62 to the west until you reach the pool (right after you pass a BnB called Bjarkarholt).

There’s a path that leads from Road 62 down to the shore. The pools can easily be seen from the path.

The other option is driving to Stykkisholmur and take the Breidafjordur ferry from there. The ferry arrives at Brjanslaekur, which is approximately 10 miles east of Krosslaug. The ferry ride takes 2,5 hours and you can bring your car along.

If you want to find Krosslaug on GoogleMaps, type “Birkimelur Swimming Pool”. This is not the correct name of the pool, but it will give you an idea about its location. If you type in “Krosslaug”, you will only see the location of the other Krosslaug.

Whale Watching in the Westfjords
Experience·$63

Hellulaug: A Unique Geothermal Hot Pool in the Westfjords
Story

The Reykjadalur Hot Spring Hike on Your Own
Story

Cultural West: A journey through remote parts of the Westfjords
Experience·$506