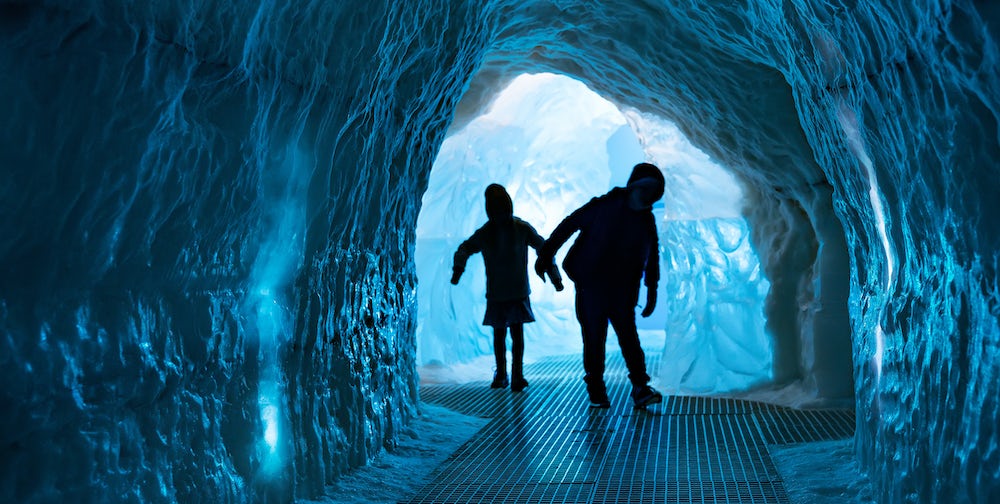 The Ice Cave in the Middle of Reykjavik

Perlan is one of Reykjavik's most unique buildings. Inside, there is a museum dedicated to ice caves and glaciers.

In July of 2017, Perlan unveiled a brand-new museum within its walls. A group of scientists working with various artists planned out a beautiful and interactive museum that would explore the natural wonders of Iceland – the first exhibition to open is the Glaciers and Ice Cave exhibition. Inside what used to be a geothermal tank full of water, they have created two levels of displays that cover all the information one could possibly want to know about glaciers, including the world’s first indoor ice cave.

It’s a stormy Sunday afternoon when my friends and I drive up to the Perlan to check out the museum. Most of the roads out of Reykjavik are closed due to the weather, and a lot of people have made use of the free shuttle bus that leaves from out the front of Harpa to spend a few of the winter hours in the museum. At first, we baulk a little bit at the 2900kr entrance fee to the exhibition which seems a bit steep, but they knock off 490kr since it’s too windy to go out onto the observation deck which is included in the price. On top of that, once we’re inside we quickly forget the ticket price and have nothing but good things to say.

With ticket in hand, we walk through the gate where a member of staff lets us know that they’ll be taking the next group into the ice cave in a couple of minutes. While we wait, we check out the display on the bottom floor. Amazing photos have been hung on the pillars spread around the room, depicting erupting volcanoes, cascading glaciers and the northern lights. It’s quite an impressive collection, but they call us into the ice cave before we can see it all. 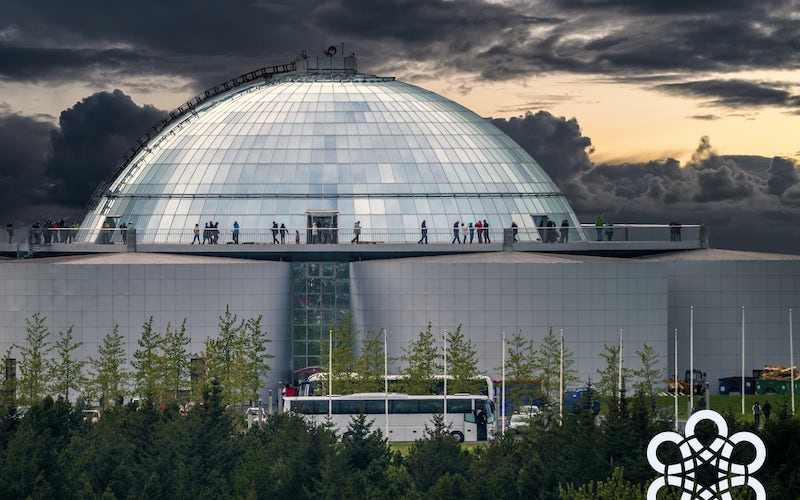 “It’s going to be -15°C (5°F) when we go inside – just a little bit warmer than it is outside” says the guide going over what we should expect in the ice cave. The whole museum has been constructed inside just one of the six old water tanks, that used to hold 1 million liters of water.

“There are three guides inside the cave that will be able to answer any questions you have,” he says. Without anymore preamble, he leads us inside the ice cave. The icy blue tunnel snakes its way left and right, branching off and looping back on itself so that there are plenty of nooks and crannies to explore, and plenty of room for everyone inside. The pock-marked ice is cool to the touch, and we spend a good 20 minutes taking photos and listening to the guides talk about the real ice caves that can be found under the glaciers of Iceland. It’s an impressive attraction, and an enjoyable experience to have if a real glacier ice cave tour is too expensive/out of season. This is the first indoor ice cave in the world. 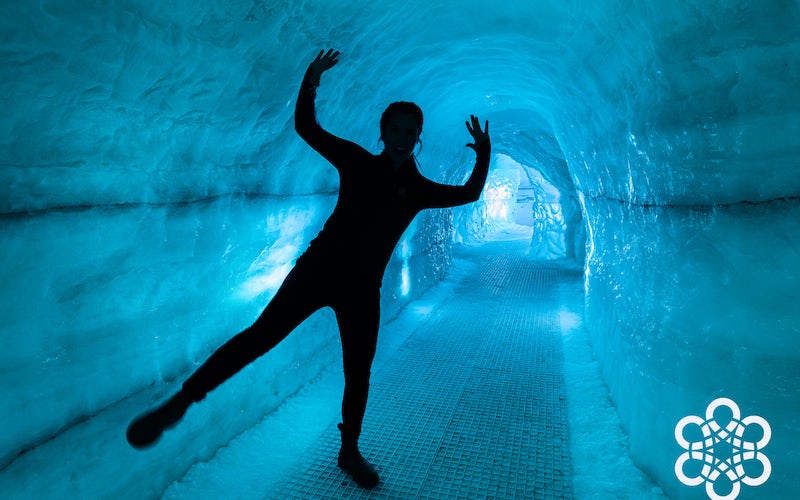 Inside the ice cave. Photo: Courtesy of The Perlan Museum 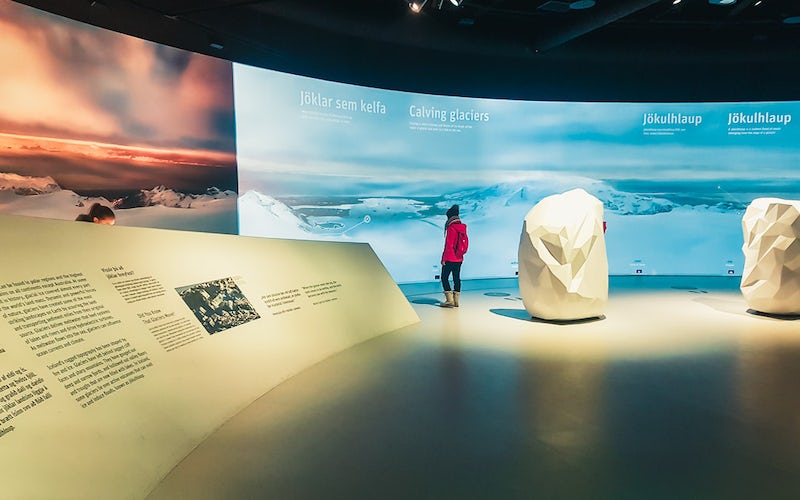 At the end of the ice cave, an automatic door reveals a winding staircase leading us to the second level. The walls of the second floor display a 360-degree picture of the view from the top of Vatnajökull, the sun setting on one side. We’re all immediately drawn towards one part of the wall that is interactive – standing on a set of footprints, we lift our finger and move it to guide a marker that appears on the wall.

Guiding it towards different points reveals information and short animations all about the geology of glaciers, people’s history with them, and the unique flora and fauna that can be found. Spread across the wall are various points to do this, revealing various aspects of the glacier in an entertaining way. 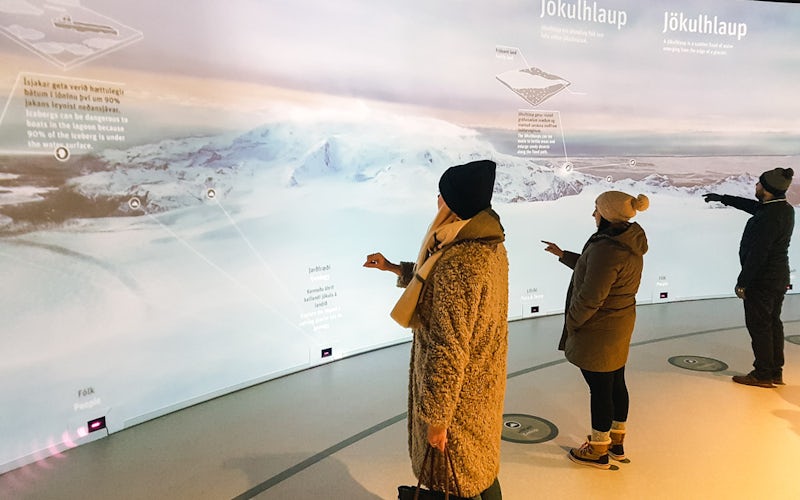 The interactive display in use. Wonderguide/James Taylor

Away from this display, more interactive exhibits await. A map of Iceland changes as you rotate a ring from the year 1800 all the way to 2200, and you can witness first hand how the glaciers have shrunk and will continue to do so into the future thanks to changes in climate. The further you twist the ring towards the future, the more the glaciers shrink until disappearing completely. Information about the changes pops up in various parts of the map, giving a great overview of what is changing and why. It’s a very real display of the changes that Iceland can expect to face in the future as temperatures rise.

Another display is dedicated completely to the effects of climate change, containing a lot of eye opening information and a remarkable time-lapse video of a glacier shrinking. Another map of Iceland is plastered on the floor, all the glaciers named and marked in assorted colours depending on what type of glacier they are; the information about the types is on display above the map, and how they act differently to one another. 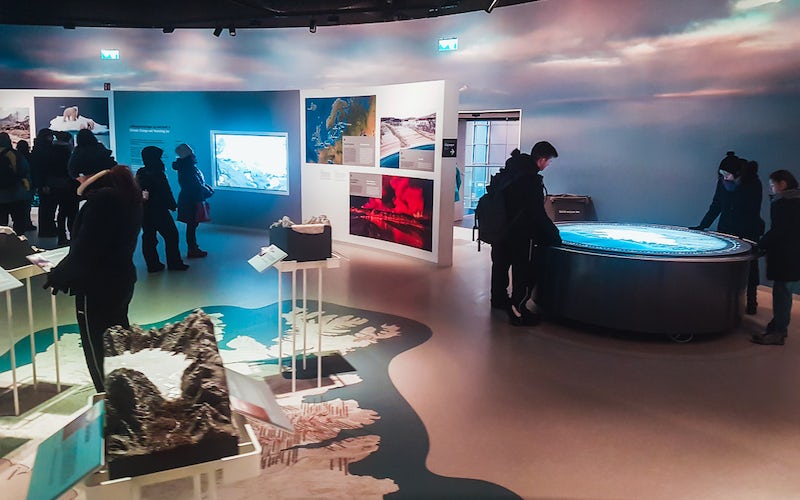 Pillars around the room cover distinct aspects of the glaciers, from glacier floods to the part they play in the creation of fjords. We spend about an hour moving about the room, interacting with the exhibits and trying our best to pronounce the different Icelandic words that exist thanks to the presence of glaciers.

As we leave, a wall is hanging with discs of red, blue and orange. A sign poses the question ‘What do glaciers mean to you?’, encouraging the visitors to write down their answers on a disc and hang it on the wall. It’s a good question to pose after learning all about the fragile nature of the ice giants of Iceland, and how important they are to the country. 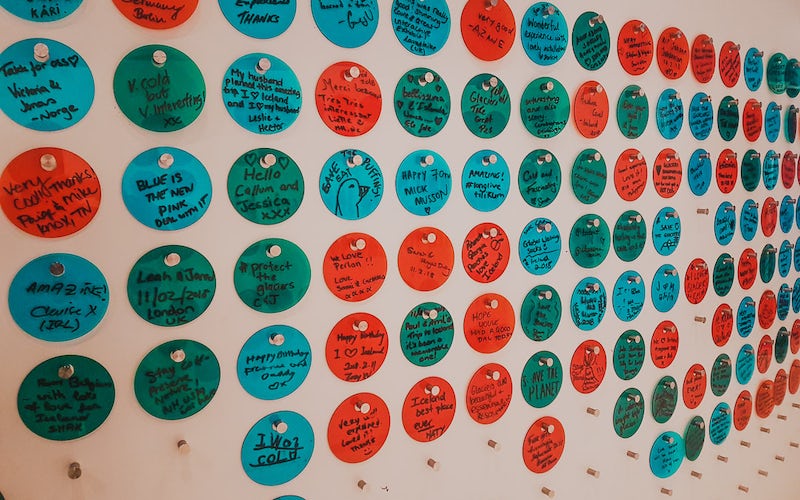 Messages on the wall. Wonderguide/James Taylor

Unfortunately, due to the weather the observation deck was closed, but when open it provides one of the best views over Reykjavik and Esja across the bay. Also located on the fourth floor of the building is Kaffitár Café and a Rammagerðin Gift Store (many of which you can also find downtown). On the 5th floor is the rotating restaurant Út í bláinn, which combines amazing views with great food.

The Perlan museum has ambitious plans for 2018. Next to open is an exhibition called ‘Land, Coast, Ocean’, slated to open to the public in May. A virtual fish tank will explore the ocean life surrounding Iceland, and a lifelike replica of a sea cliff will delve into the world of the nesting sea birds that flock to Iceland during the warmer months. There is also going to be a simulated earthquake, teaching us about the powers that created this tiny island in the north Atlantic. Also planned to complete the museum is Iceland’s first Planetarium, set to open in the Autumn of 2018.

Getting There: Situated quite a way from downtown, the easiest way to get to the Perlan would be to get the free shuttle bus that is offered, leaving every half hour from 9:00 to 17:30, leaving from out the front of Harpa Concert Hall.

If you have a ticket for the Hop On – Hop Off bus (the big red tour bus), it stops right out the front of the Perlan.

From Hlemmur bus station, you can take bus number 18 which will drop you off at the bottom of the hill.

The Most Remarkable Buildings in Reykjavik
Story