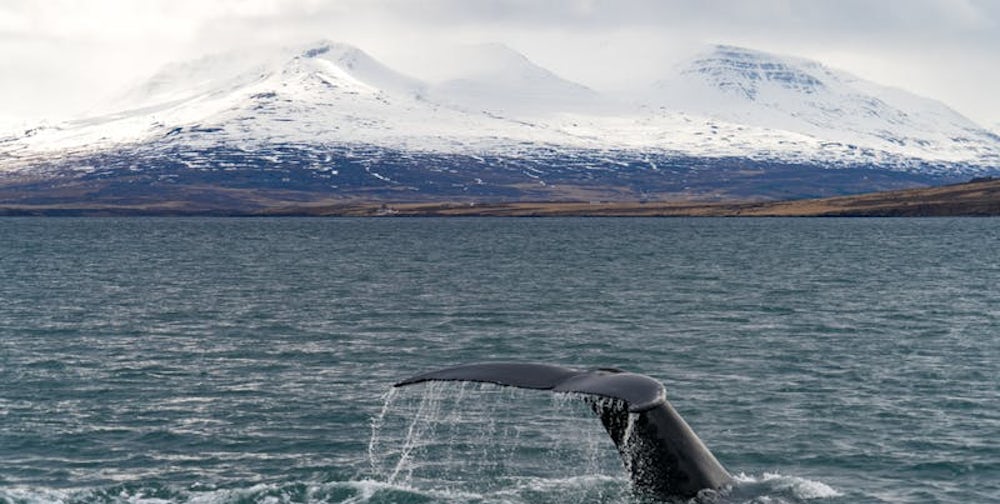 The Best Spots to See Whales from Land in Iceland

These are the best places you should bet on if you're trying to spot whales from land in Iceland!

I was recently asked whether there are places in Iceland where it’s possible to spot whales from land. I have never seen a sea mammal from the shore in Iceland, not even a seal, so frankly I did not know how to answer this question.

I started asking around and soon found out that although spotting whales from the coast is not very common, sightings are more common in some places than others. 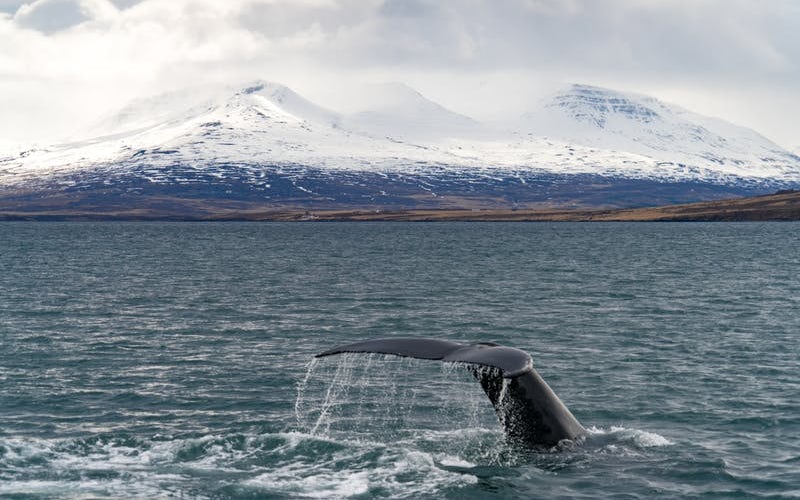 Here’s compilation of all the places I’ve heard of that have a reputation of being good for spotting whales from land. I don’t think it’s very likely that you will see anything, but if you want to try your luck, these would be your go-to destinations.

This selection is entirely based on what I’ve heard and read. If you know about some places that aren’t featured in the article – go ahead and send me an email. 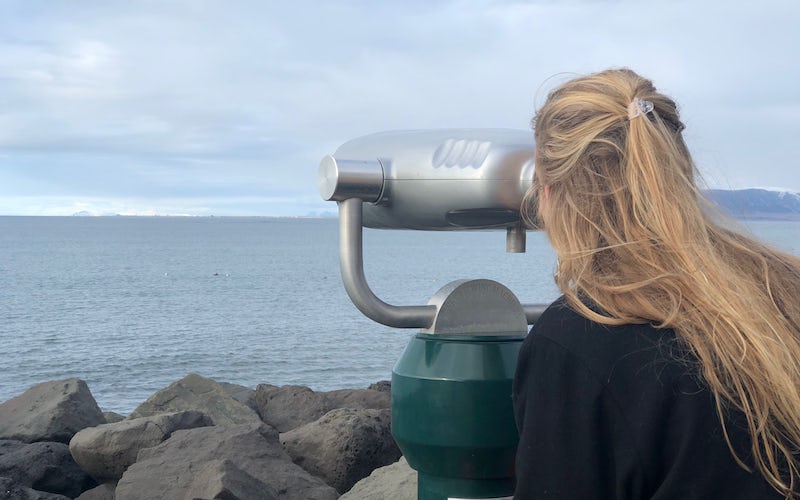 There are in fact some places in the capital where you could spot a whale from the land. You will definitely need binoculars though. If you forgot yours at home, you can drop by at the Eiðisgrandi Beach in the west side of Reykjavik, where they just recently installed binoculars for whale watching. I have to admit that I've never seen a whale from land in Reykjavik, but I actually haven't really been on the lookout.

The northern coast of the Snæfellsnes Peninsula is known for being a great place for whale-watching. Orcas are quite common in the area and so are dolphins and porpoises. There have been quite a few sightings of whales from the coastal towns of Snæfellsnes Peninsula for the past years, some have even made it to the news.

Whales are more commonly seen from land in the summer. There are various reasons why whales dare to travel so close to the shore, the most common is that they are following schools of herring or other species.

Whales and orcas have been seen from the harbour at Grundarfjörður numerous times. You can also try stopping at the bridge over Kolgrafarfjörður, just east of Grundarfjörður. The video below was taken at that bridge, the orcas are actually swimming under the bridge and out of the fjord.

On a sunny summer's day last year, a large pod of pilot whales headed towards the harbour at Hellissandur. When bystanders realised that the whales were lost and would get hurt if they would swim any closer to the shore, they called for the local rescue squad.

A similar incident occurred at Rif, a nearby town, just a few years ago. These events are also quite common in the Faroe Islands. Scientists do not have an explanation for this odd behaviour; one hypothesis was that a leader whale got confused, swam towards the coast while the other whales followed. Pilot whales are known to follow a single leader whale, so that might have been the issue.

Another alternative to spot whales from land in Snæfellsnes is the westernmost tip of the peninsula, Öndverðarnes. The cliff south of Öndverðarnes, Svörtuloft, is well worth exploring too. 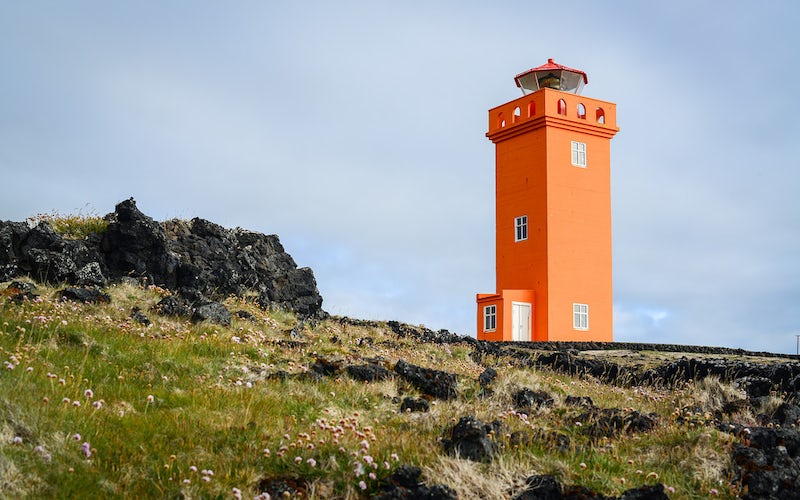 In 2005, Guðbrandur Sverrisson, a local farmer in the area, caught a glimpse of two large whales. Guðbrandur, who is known for his interest and knowledge of whales, was certain that these two whales were indeed blue whales–the largest mammals on Earth.

“It’s ideal to watch whales from here, just sitting on the shore with a telescope. The best conditions to see the whales is when the sea is calm, like it usually is during the night. These creatures are mobile, so it is never certain that you’ll see them. They have nevertheless been keen to stay in the area for quite a long time,” Guðbrandur told a local news reporter.

It’s also possible to go on a whale watching tour from Hólmavík if you want to increase your chances of spotting a whale.

There is a possibility of seeing whales from Látrabjarg, a stunning bird-cliff on the westernmost tip of Iceland. I have to advise you to be extremely careful there because falling off the cliffs means instant death. It’s best to lie down flat on your belly to observe the birds that reside in the cliff walls or to possibly sight sea mammals. 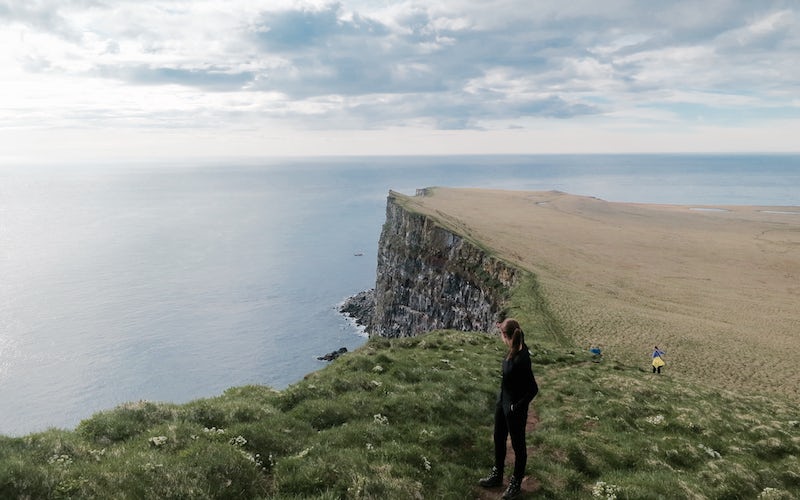 The magnificent Látrabjarg Cliff. No whales in sight, though. Wonderguide/Nína.

Hvalfjörður literally translates to “Whale Fjord”. Despite the name, whales aren’t a very common sight in the fjord nowadays.

When I started asking people about seeing whales from land, one traveler told me he’d seen two whales in Hvalfjörður Fjord. So I guess you have a reason to gaze out of your window if you’re driving along the fjord.

Skjálfandi Bay is often considered to be the best spot for whale watching in Iceland. There are at least two companies operating whale watching tours from the town of Húsavík every day.

According to one of the travelers I asked, there’s a good spot to see whales from land just north of Húsavík. He wasn’t quite sure where this spot is exactly, but you can try to ask around in Húsavík.

It’s also well worth your time to simply go on a tour, my personal recommendation is this classic Húsavík whale watching tour. 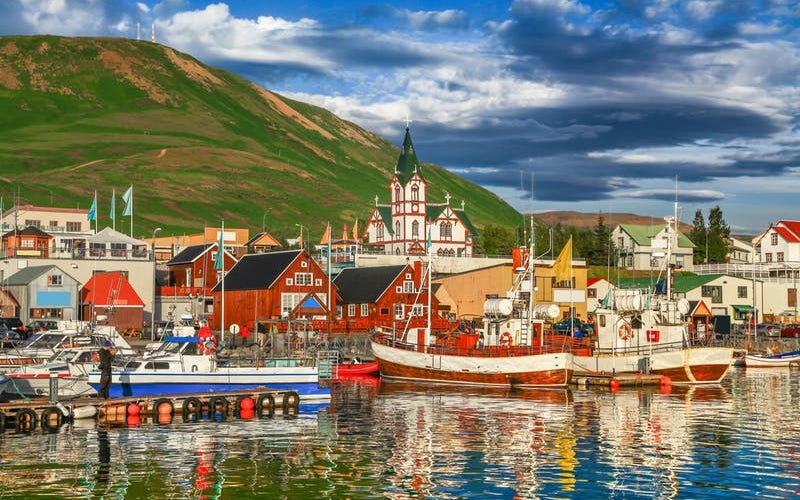 The colourful harbour at Húsavík. Wonderguide/iStock.

I know that whales are sometimes seen from land in Neskaupstaður, a small town located on Norðfjörður Fjord in the Eastfjords of Iceland.

This video from last summer is awesome!