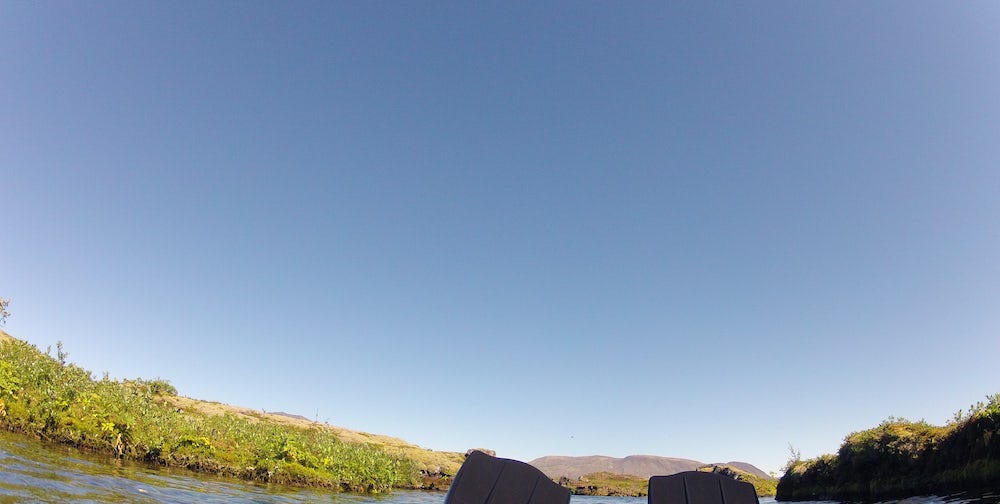 Silfra is a fissure in Thingvellir National Park, Iceland, filled with cold water. It's located between the tectonic plates of America and Eurasia, and snorkling in this fissure is an absolutely an experience that should be on everyone's bucket list!

I always say that finding new hobbies is my favorite hobby. That means you need to be open to trying new things and going out of the ordinary to experience something new. Living or visiting in Iceland gives you an amazing opportunity to try different types of activities. Even if the bucket list keeps getting longer I finally managed to cross something off: snorkeling in Silfra between the tectonic plates of Europe and America.

Þingvellir National Park has always been one of my favorite places in Iceland. It is woven into Iceland’s history as the place we held our Parliament from the 10th to the 18th century. But it is also truly unique for the sake of its beauty and nature. It is a part of UNESCO’s world heritage list and the biggest clearwater lake in Iceland, Þingvallavatn is named after the place. 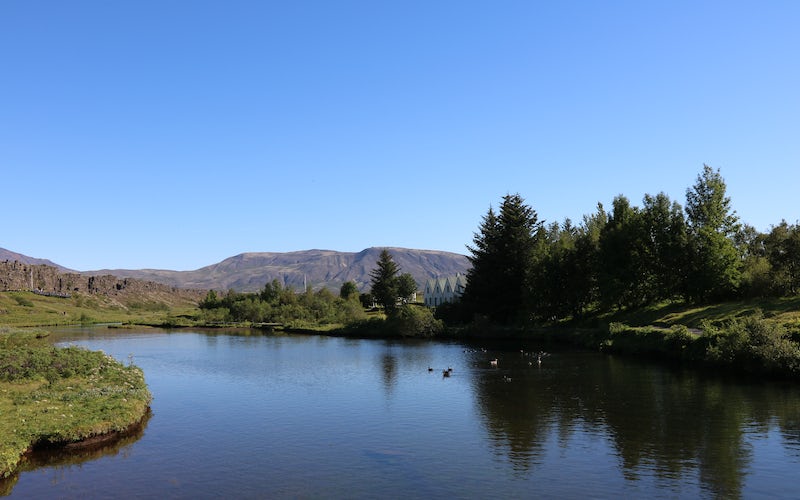 The water in the lake is mostly glacial water that has been filtered for thousands of years in volcanic lava surrounding the lake. There are a lot of fissures and cracks in the area and some are visible when you walk around but others are underwater. One of those fissures is Silfra, and because of water pouring through the lava into the fissure at only 2°C (35.6°F) the visibility is one of the best in the world ~120m. Which of course makes it perfect for diving and snorkeling!

Deborah, my girlfriend is used to hot summers in Marseille and swimming in the warm sea. One day I asked her how she would feel about swimming in 2°C, at first she thought I wanted to kill her!! The summer so far has been slightly colder than the winter in Marseille. But when I started to tell her more about it she got excited and agreed to do this with me.

Snorkeling in Silfra can be dangerous if you don’t have the right knowledge and training and this is the reason the National Park makes it a condition that all snorkeling and diving activities are under guidance of a licensed diving operator. Dive.is is one of the most experienced dive and snorkel tour operator so we decided to book this tour with them.

We arrived and the weather was really amazing. We met up with the team from dive.is
After signing medical statements we proceeded to a briefing session with Richard P. 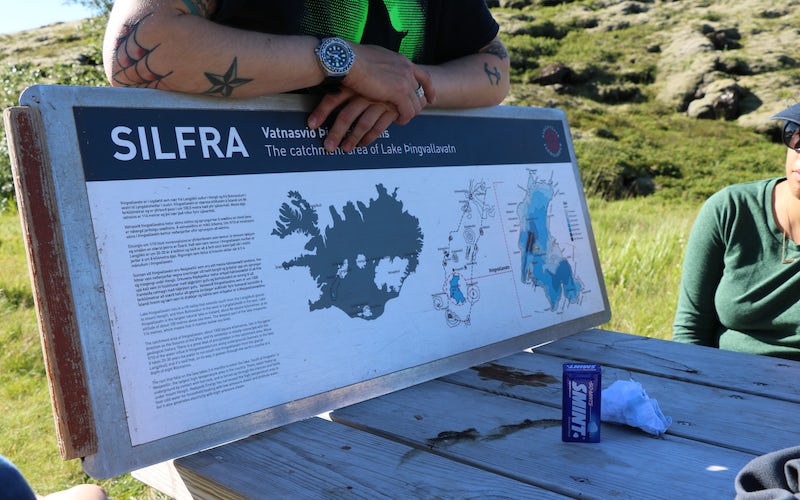 After the briefing we were really excited to get started and get in the water. But first suit up!  We got undergarments that keep you warm and then it was time for the clunky dry suits. 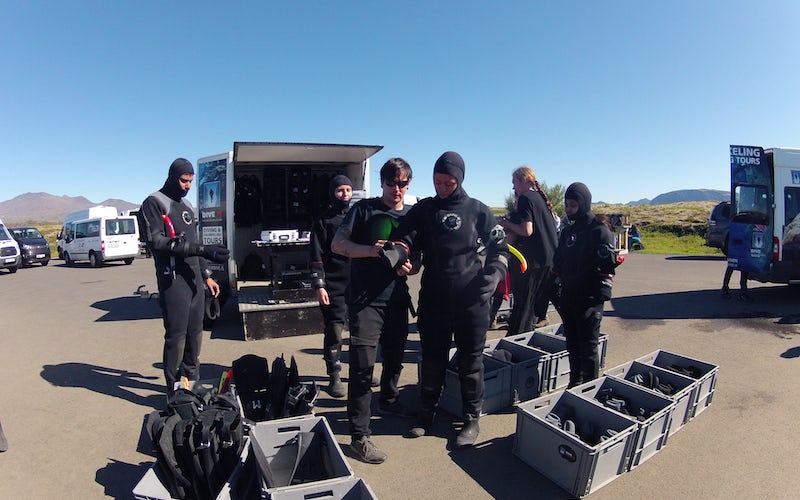 After getting suited up it was time to cross the road and walk in the direction of the Silfra starting point... 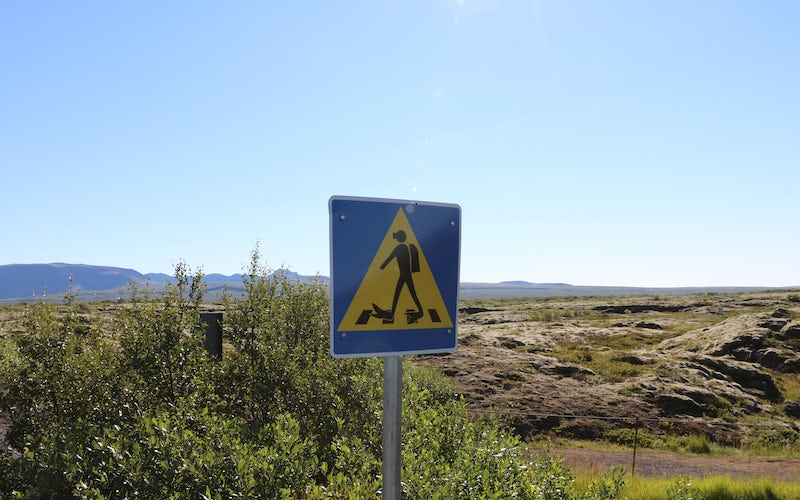 Next to the platform it was already starting to be really hot in the suit and you started to wish the groups ahead of us would move faster. Feeling the sweat running down your back and looking at the ice cold water just few meters away. 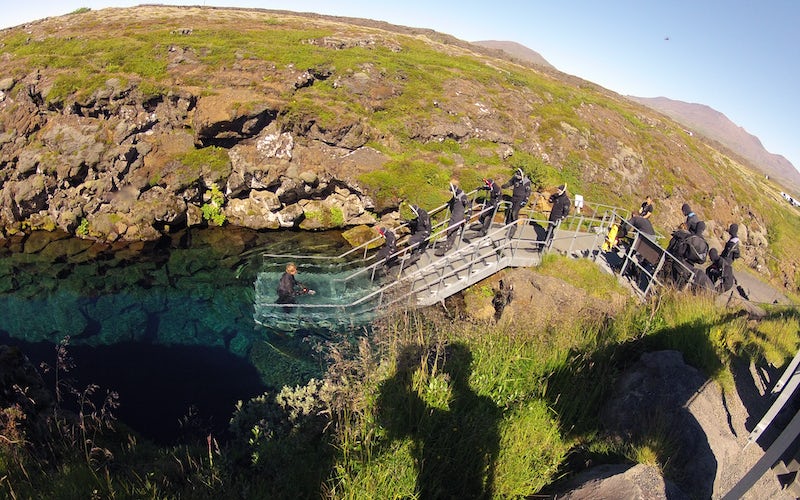 Waiting for our turn – Photo: Wonderguide/Thor

Soon after it was time to spit in the glasses to activate the anti-fogging system...yes, that is the trick! Everyone in the group was a little bit hesitant at this point, thinking this was some sort of a internal diving crew joke on the tourists. But it turns out this is the best way to keep the glasses from fogging up after going in the water.

After getting our frog legs we finally entered the 2°C (35.6°F) cold water. It felt really great after being sweating and waiting in the hot sun. When everyone was ready it was time to go and Richard asked us to step off the platform and into the floating position face down in the water.

Feeling the cold water of Silfra was a small shock and a relief at the same time. But the really amazing thing was the view. Being inexperienced with diving I let out a loud “WOW" underwater forgetting my snorkeling pipe, maybe not so smart but the view was breathtaking (pun intended). 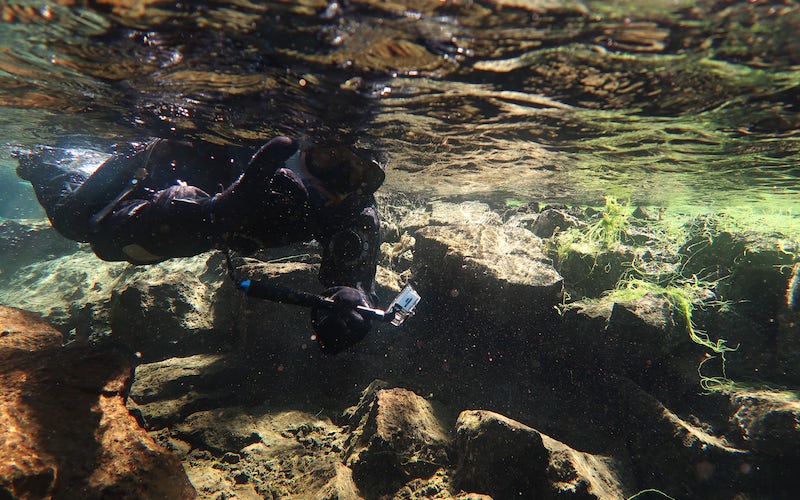 Throughout the snorkeling tour, not once did I feel cold but in the beginning my lips felt a little bit cold. The whole tour was truly mesmerizing and every turn opening up a new amazing horizon of different colored rocks, vegetation and sunlight coming in through the surface.

In fact the tour itself went by super fast and we hardly turned to go to our neutral resting position (on the back). We tried a little bit freediving although Richard made it look much easier than it actually is.

But since this is a really visual experience I would like to let the following pictures speak for themself. All of the pictures below are from this very tour. 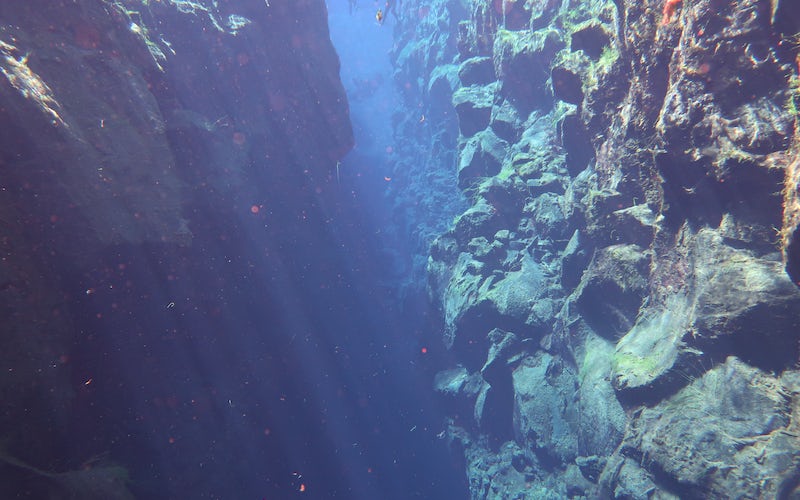 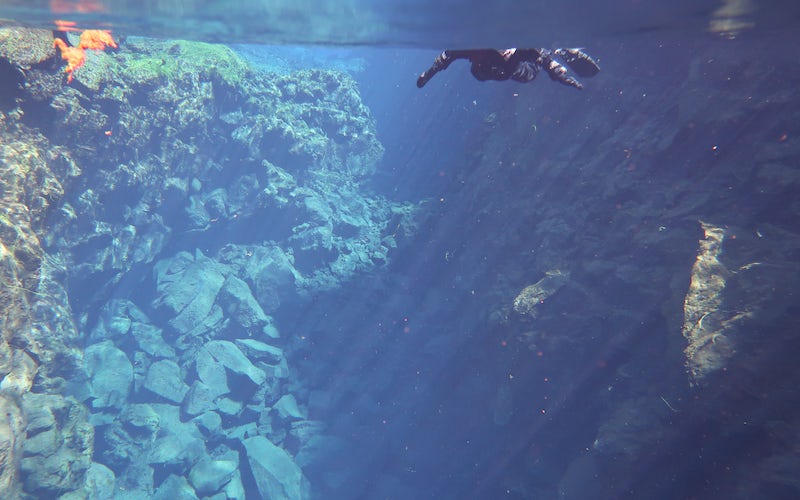 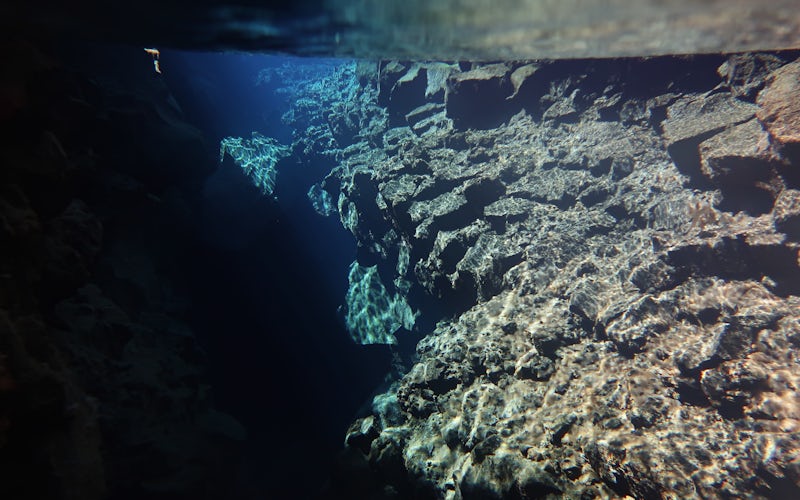 At the end of the tour it was really hard to wipe the grin off our faces and to make the moment even more memorable was that it looked as both of us had gotten a free botox in our lips after the stay in the cold water, a known side effect that lasts only for few minutes. 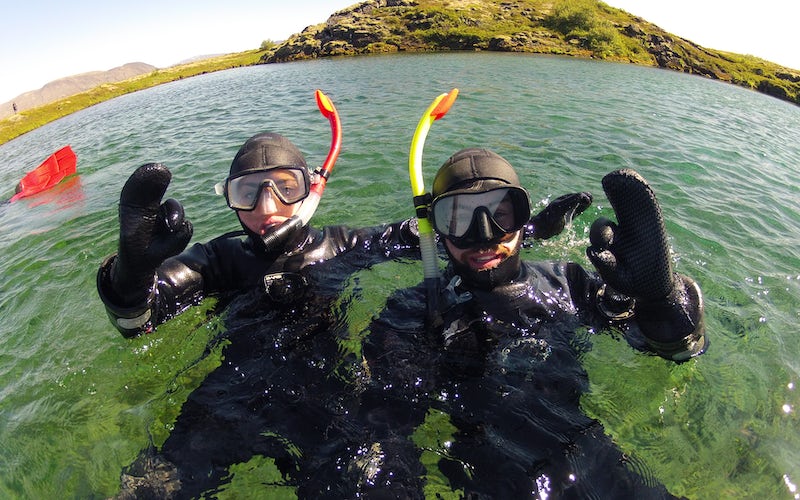 Us in the water – Photo: thor@wonderguide.com

After walking from Silfra to the equipment area we had some biscuits and hot chocolate with the group talking about our experience.

Snorkeling in Silfra: In between Two Continents
Experience·$126