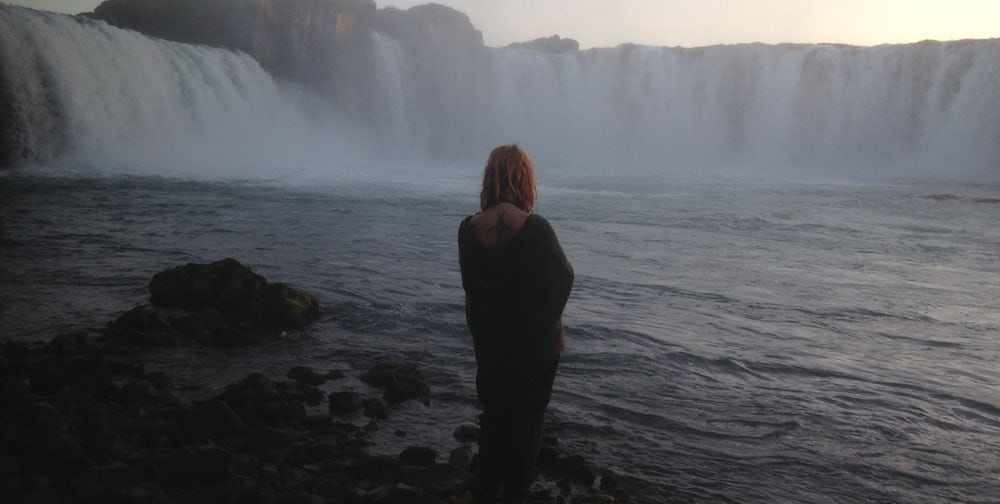 There is something about Icelandic waterfalls that can hypnotise and draw people in. There is an immense power in the water that thunders down in strange patterns and soaks any who approach. Here are six of my favourite waterfalls in Iceland.

The rivers that thread through Iceland are a part of its geographic identity. Like veins running through an immense body, water reaches its tendrils all over the land, young and fresh in bubbling springs, stagnant ancient cold in glaciers, bubbling and writhing into hot springs, sea that seethes and sacrifices, rivers running fingers over everything. Iceland is a land with strong connections to water, settled away from the rest of Europe, high in the Atlantic and nestled in cold furious ocean.

Driving down the ring road, away from Reykjavík, and into the south, the passageway is threaded by waterfalls running off of highland and hitting the earth in explosive fury then going in rivers towards the Atlantic. These waterfalls speak of a wild intoxicated beauty born somewhere beyond, of sources deep in the highlands, where water bubbles from holes in the ground and trickles downwards from ancient glacial whiteness and giant slumbering mountains. 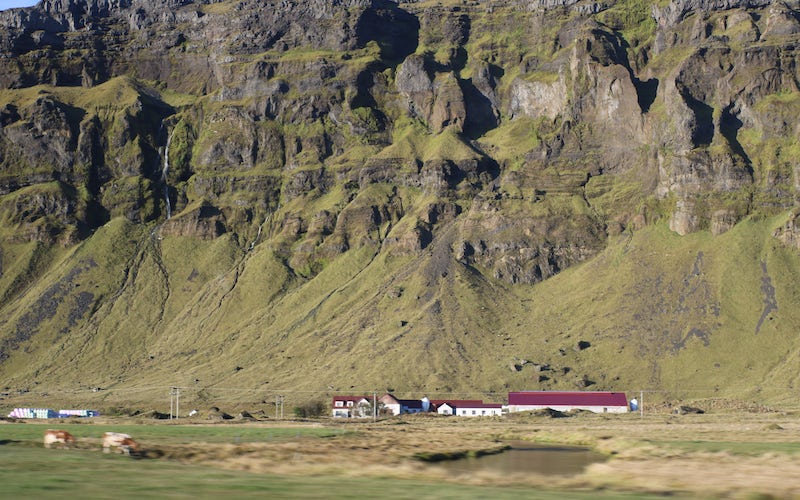 One of many ring road waterfalls. 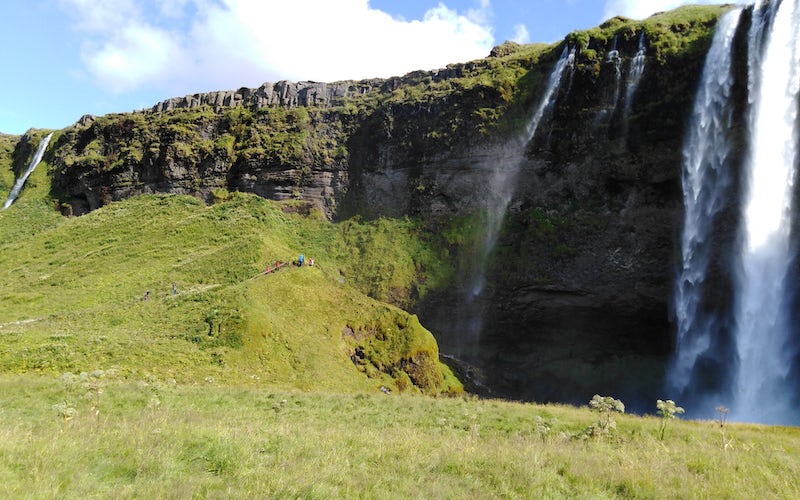 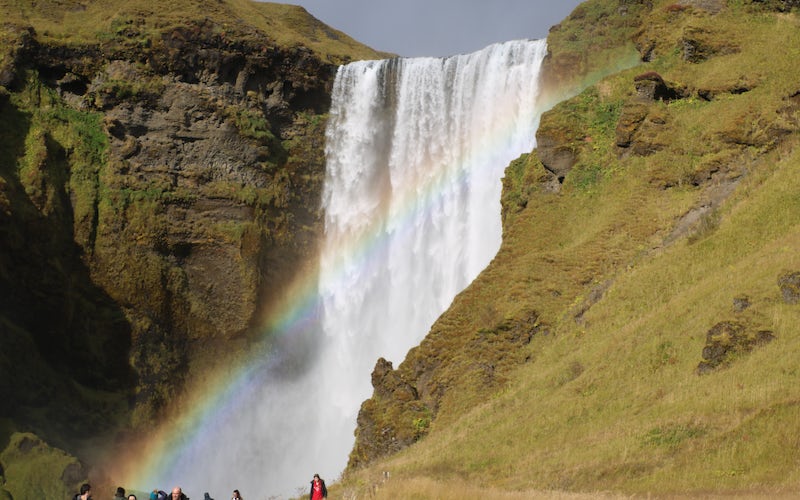 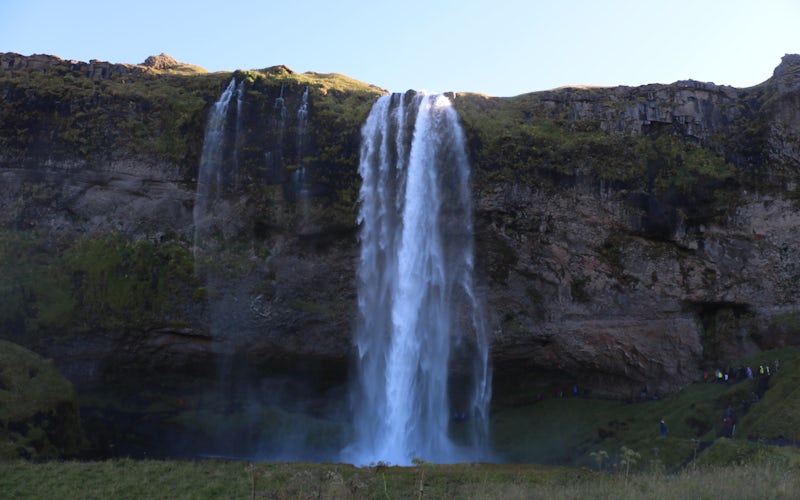 Regarding Seljalandsfoss with an old friend, she muses upon the shapes and movement in the water. The waterfall moves like a ghostly creature, an ancient white Japanese dragon perpetually diving down.

Seljalandsfoss is a major tourist attraction, easily accessed by the southwestern part of the ring road, and the 249 that leads to Þórsmörk. It has a drop of 197 ft (60 metres) and is part of the Seljalands River running down off of Eyjafjallajökull. Visitors can follow a path around the back of Seljalandsfoss, through a cavern.

Walking behind Seljalandsfoss is a spiritual experience, one that captivates and soaks you. It is a short walk certainly worth the queue of tourists.

Stepping down from the path when you are directly behind Seljalandsfoss it is possible to go right up close to the waterfall. The immense cold air and water will soak your whole body in a unique and elemental way that is nothing short of a baptism. 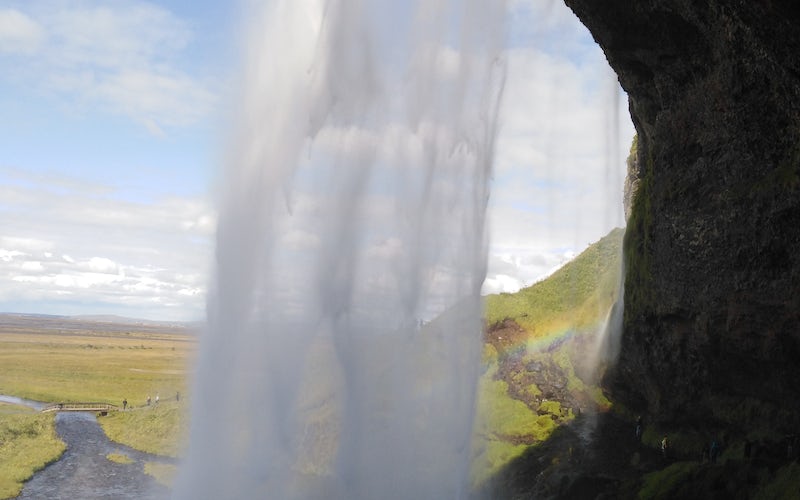 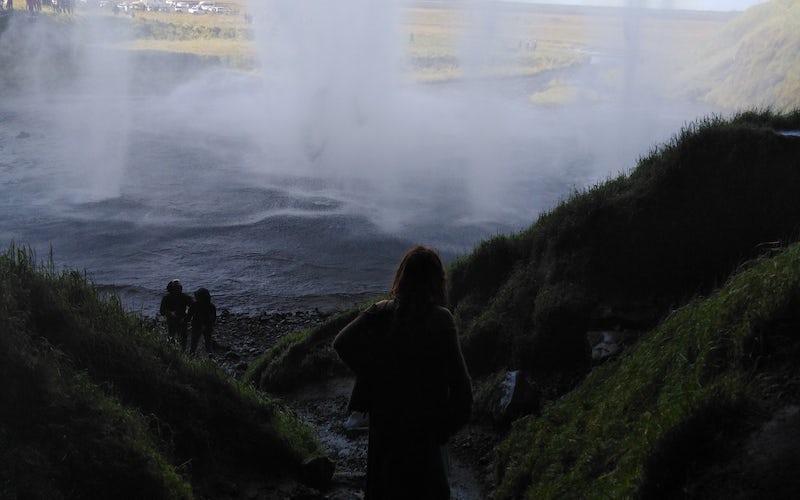 The author behind Seljalandsfoss 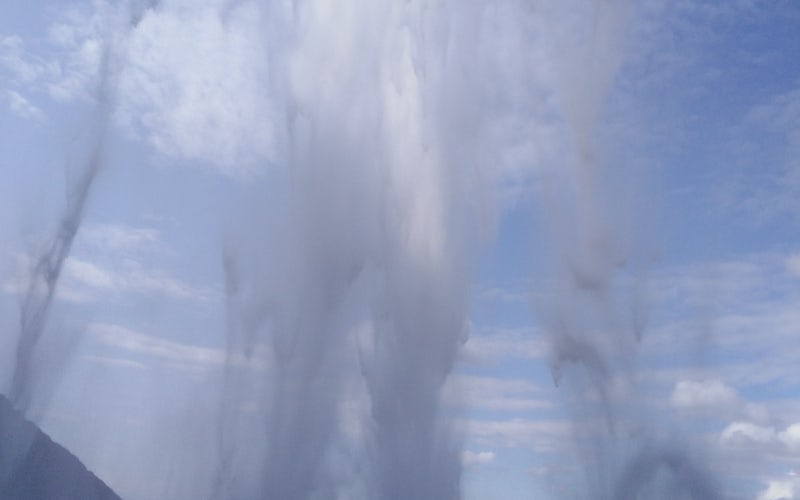 The author behind Seljalandsfoss

Gljúfrabúi is a hidden waterfall very close to the more touristic Seljalandsfoss, but often overlooked by visitors. To visit and pay homage to the otherworldly Canyon Dweller it is necessary to wade through a thin and watery cavern in the rock face. Entering into the canyon is like entering a new world, a dark primordial jungle space where the elements rule. 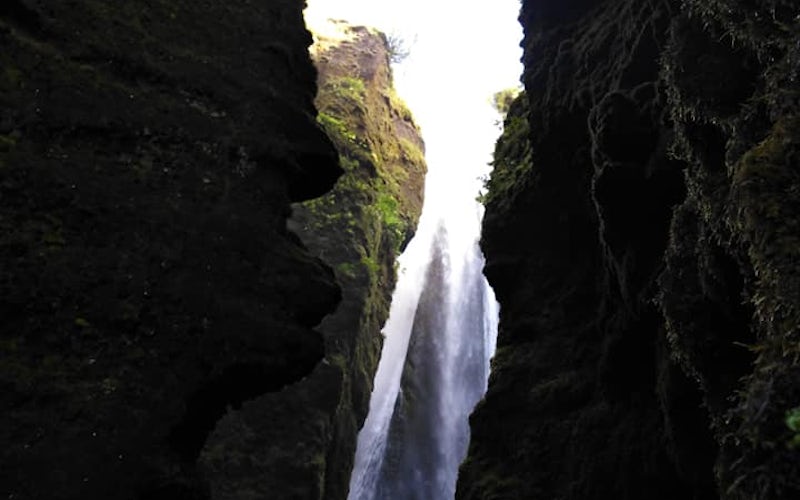 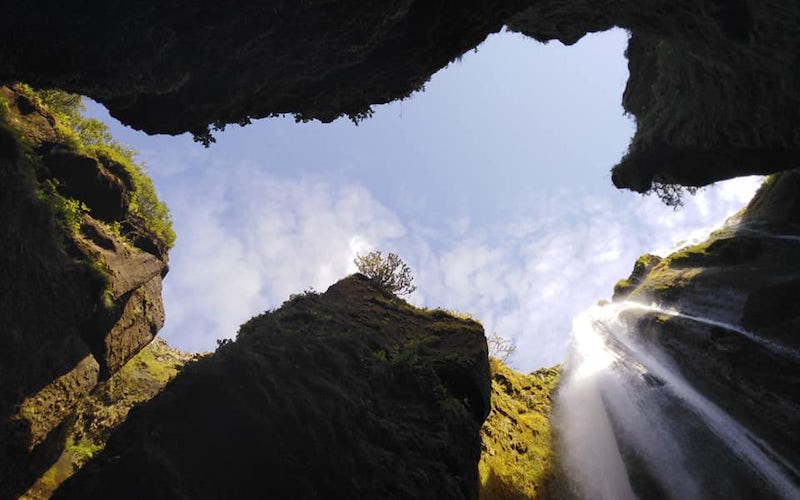 I have visited Gljúfrabúi several times, but my most memorable was with a hitchhike on my way to the Westman Islands. After waiting in the dust for a long time, hoping for a lift to Landeyjahöfn before the ferry was due to leave, we were finally picked up by two men. The driver was an eccentric old Christian missionary who lived on the island, and he had with him another hitchhiker, a man from Portugal. By coincidence, they both had huge curly moustaches, which initially made them look to me like father and son. Soon I learnt that the driver had been picking up hitchhikers all day. He convinced all three of us to stay at his home on the island for a few days.

On our way to the ferry we suddenly realised we were one hour early. With a small amount of time to spare, it was decided to turn around and have a look at Gljúfrabúi, the driver’s favourite waterfall in Iceland. The enthusiasm of everyone upon entering the canyon was so brilliant, ‘the best waterfall I have ever seen!’ the other hitchhiker exclaimed, enthralled and enraptured. It’s easy to see how Gljúfrabúi can create such an impression. This canyon is really worth a visit. 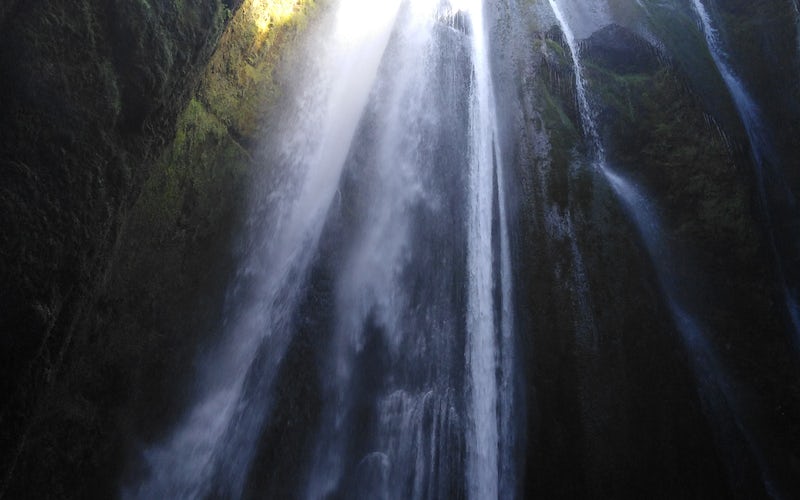 The author inside the canyon 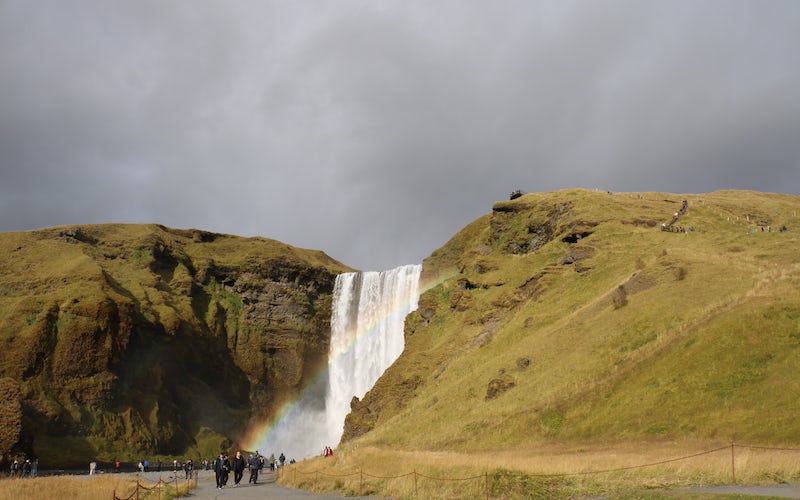 Skógafoss is one of my favourite waterfalls in Iceland because it marks the beginning of the wild Fimmvörðuhals hike. To me, it is an immense gateway into the highlands, a monumental thundering steaming release, a joyful demonstration of watery power and of life.

This magnificent waterfall is 197 ft (60 metres tall), and the approach soaks visitors in pure glacier water. A story is tied to this waterfall. According to legend, Þrasi Þórólfsson, the region’s first Viking settler, and according to some, a giant, hid a treasure chest behind the waterfall. Many attempts to find the treasure after Þrasi’s death were made. Several years later a group of locals once managed to grasp the side of the chest, but the power of the waterfall was too strong, and a golden ring fell off of the side of the chest. The treasure was then thought to be lost forever.

In Skógasafn museum this golden ring is on display and can be visited. 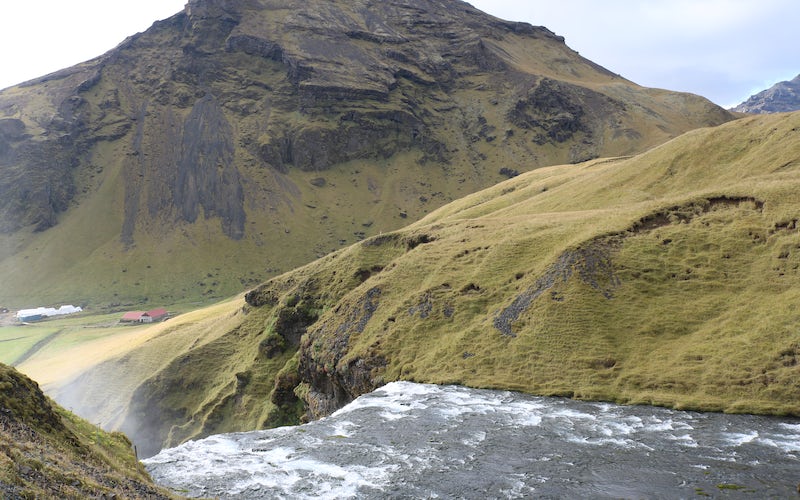 View from the top of Skógafoss. 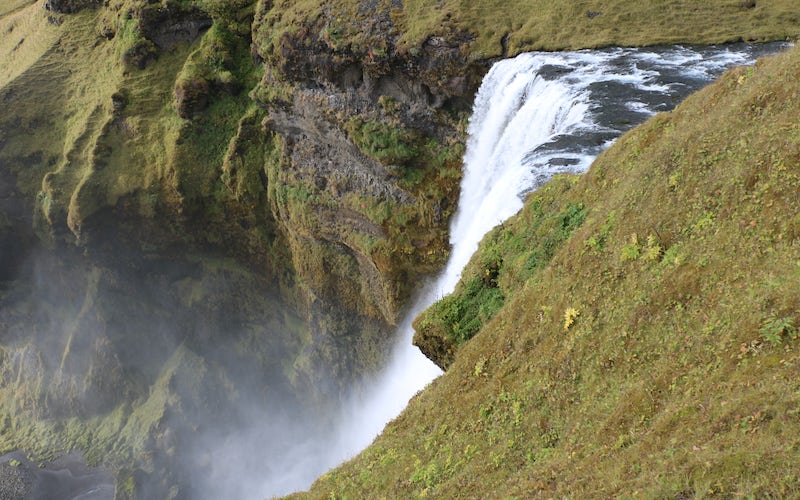 A staircase leading above and behind Skógafoss leads along the eastern bank of the Skógar River, which runs through a deep and misty canyon and over twenty six waterfalls. This is an exceptionally beautiful region, a green elemental Eden land. 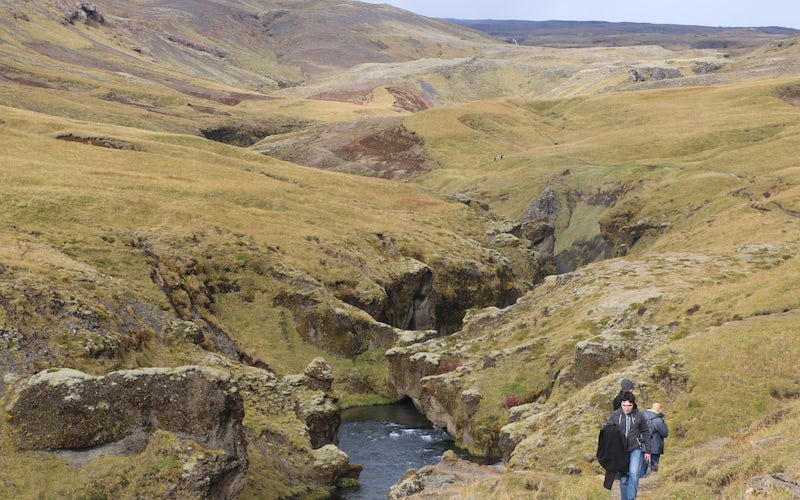 Canyon behind Skógafoss, facing towards the glaciers 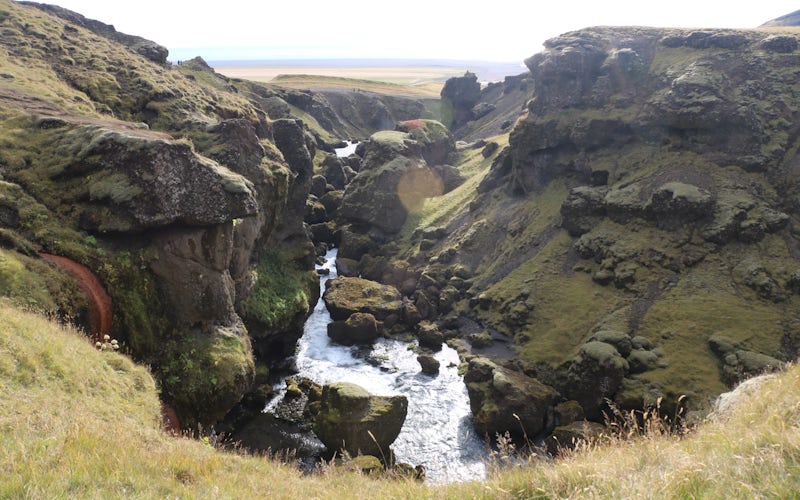 Canyon behind Skógafoss, facing the sea 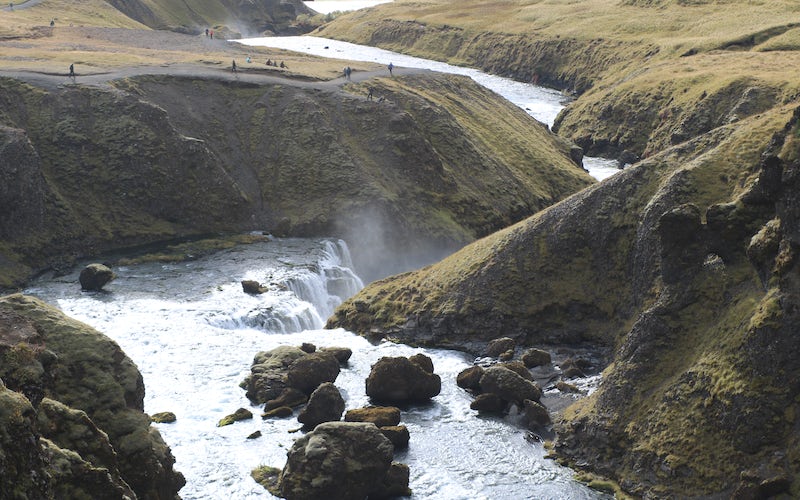 Canyon behind Skógafoss, and one of the region's many waterfalls from behind

Going further along the Fimmvörðuhals route will bring you to the passage between Eyjafjallajökull and Mýrdalsjökull. To read more of where this path leads, have a look at Hiking Fimmvörðuhals without a Guide in Two Days.

Goðafoss: the Waterfall of the Gods 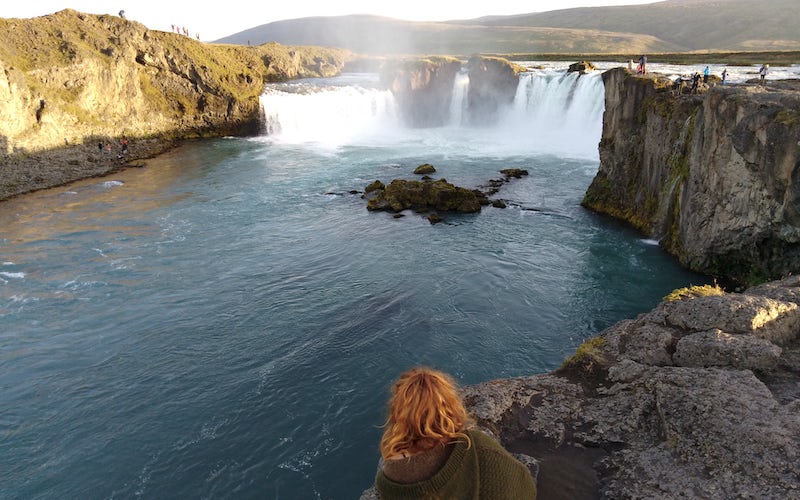 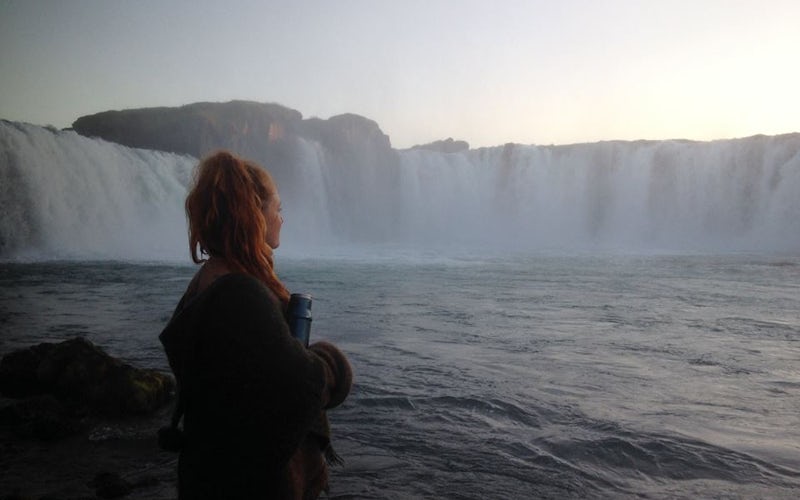 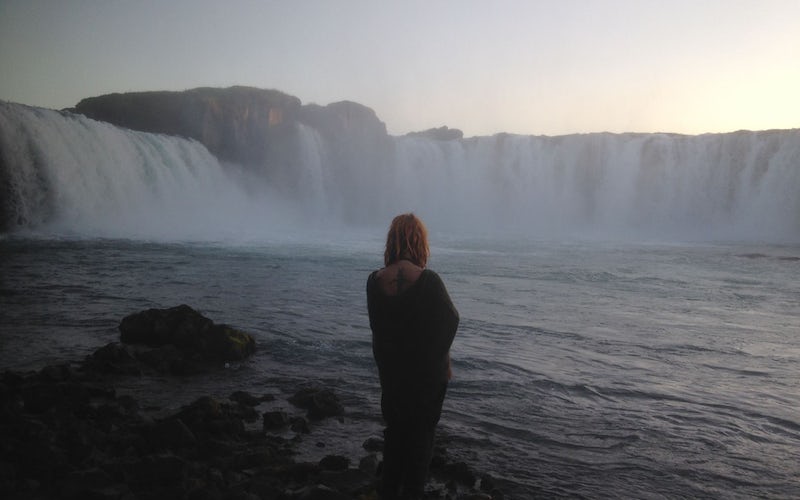 Goðafoss is in the north of Iceland, directly halfway between Akureyri and Mývatn, and is a perfect stop off point halfway between the two, close to the ring road. The river Skjálfandafljót makes a drop of 40 ft. (twelve metres) with a width of one hundred ft. (thirty metres) at Goðafoss.

This waterfall is particularly interesting because it was the site of an important moment in Icelandic history. In the year 1000, when Iceland decided to convert from Paganism to Christianity, Þorgeir Ljósvetningagoði, the Viking Lawspeaker, famously stood at the top of Goðafoss and threw the old Pagan idols into the water. This symbolic moment was transformational for Iceland, but did not actually stop people from practicing their Old Norse religions. They just had to do so in secret. 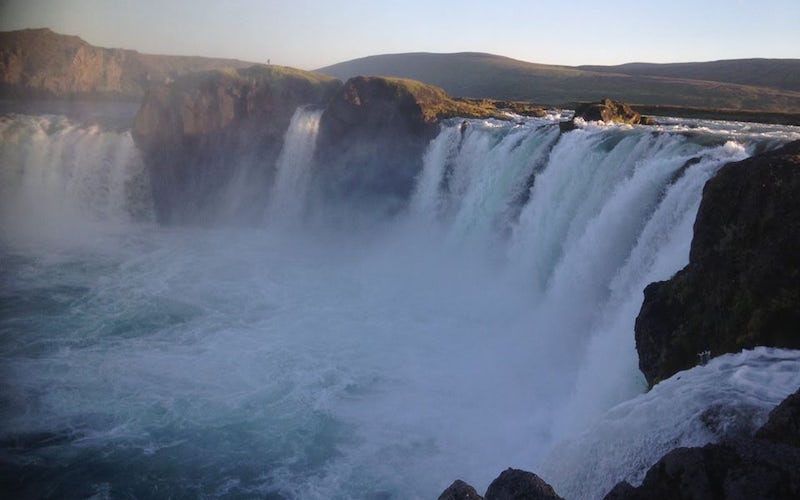 Goðafoss in the morning 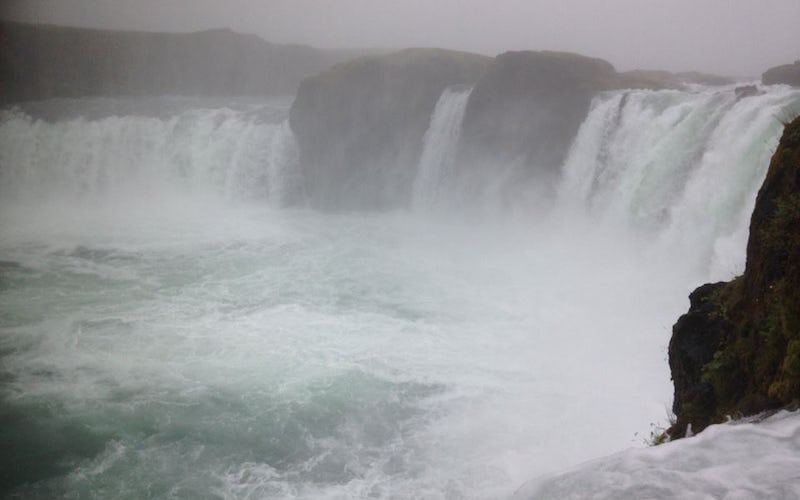 And in the summer night

I find it easy to sit beside Goðafoss for a long time and get lost in its mossy banks, strange rock shapes, and powerful blue green waters, imagining upon which rock Þorgeir Ljósvetningagoði stood when he threw the Old Norse statues into the ancient rushing water. 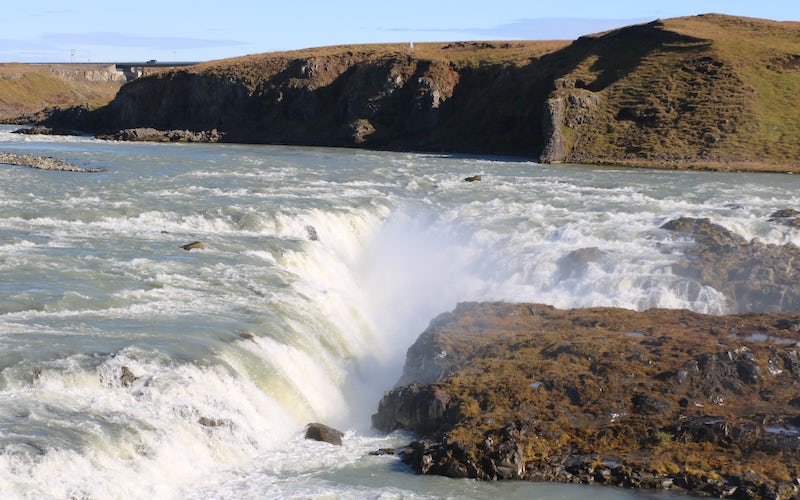 Urriðafoss has the highest volume of water of any Icelandic waterfall. It is located by the edge of the Þjórsárhraun lava field, a field that is the result of the greatest lava flow on earth since the Ice Age.

I visited Urriðafoss with my friend, an Icelandic fisherman. He told me how his young son caught his first trout here, and stood proudly with it while photographed by passing tourists. 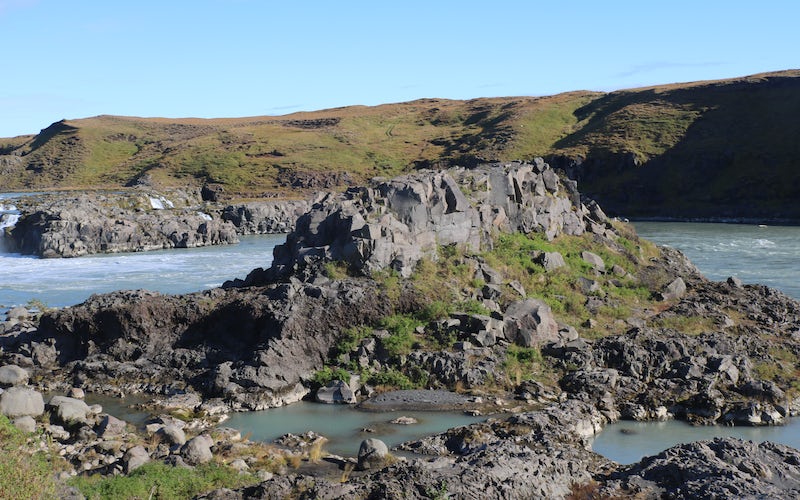 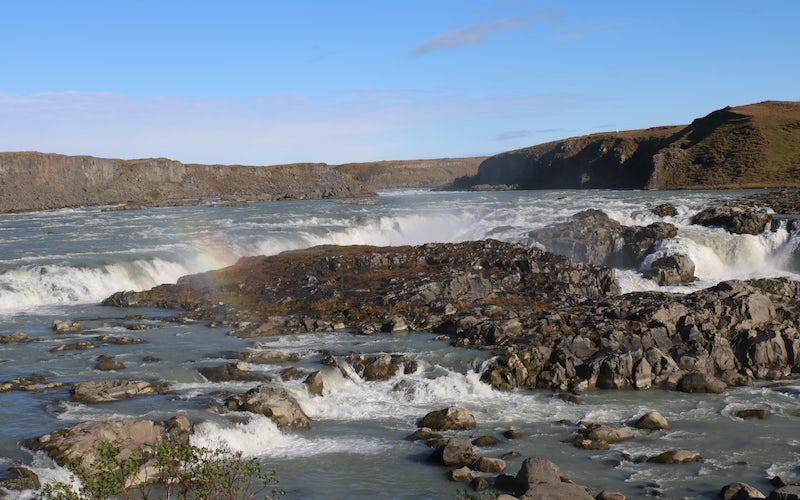 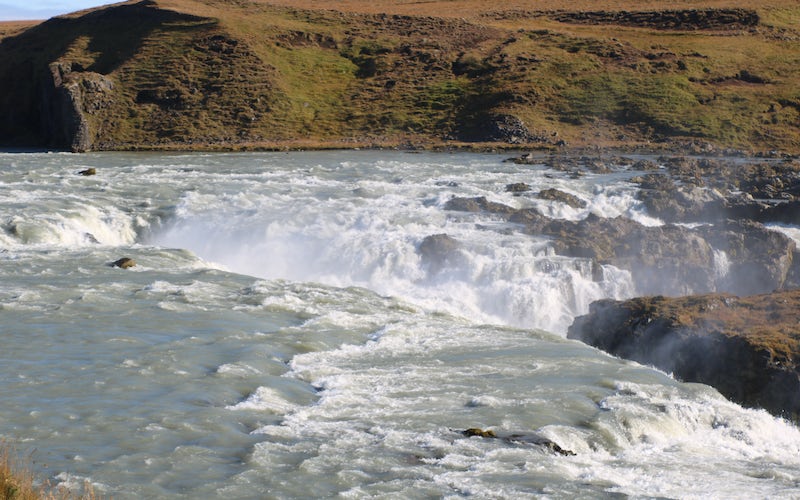 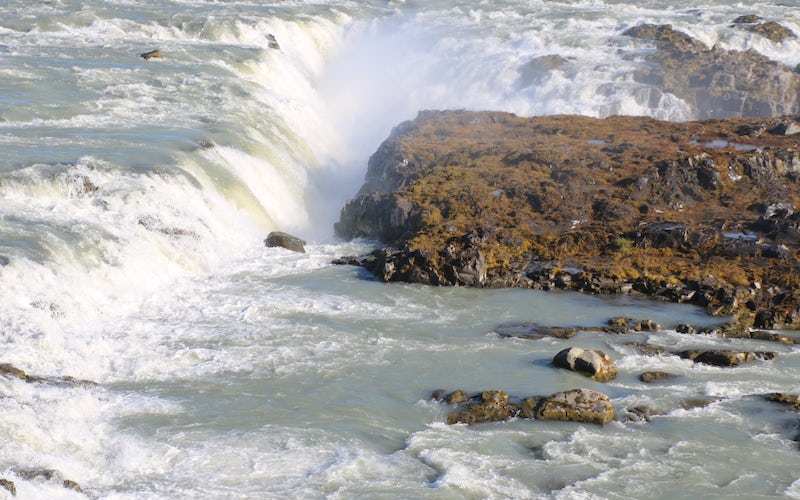 One of my favourite days this summer in Iceland was spent lost wandering up and beyond the mountains behind Selfoss. A friend and I discovered a small but beautiful waterfall here, one that falls into a deep pool that is good for bathing. We were told by a local farmer that the most beautiful part of Iceland lay just over the mountain, so followed his directions and the sound of running water to this sacred place. We spent many hours walking along the canyon made by this beautiful river, and bathing in the pool.

I cannot say the location of this particular waterfall, as I do not remember, and think it ought to remain secret. 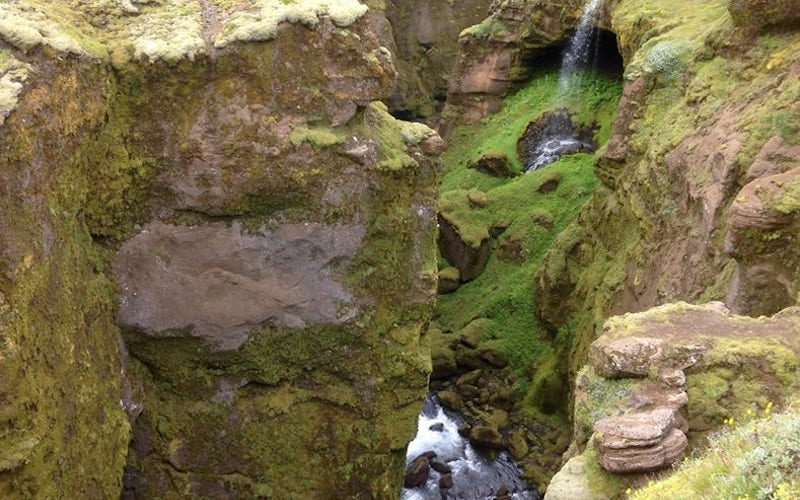 A small waterfall in the Skógar canyon 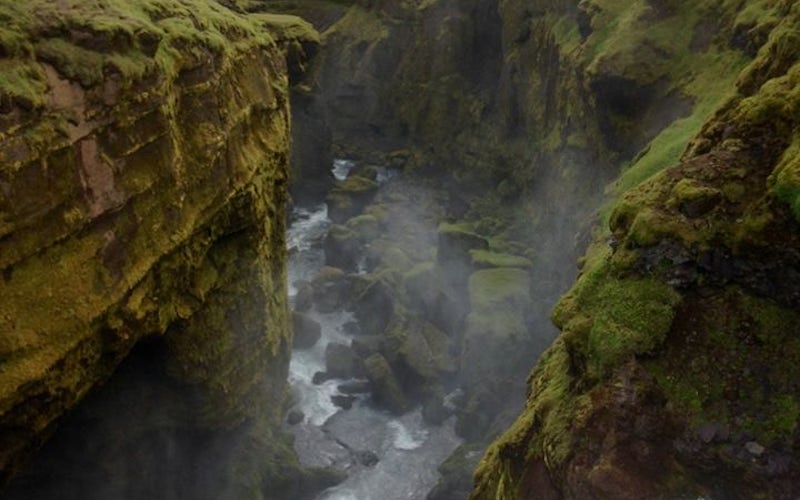 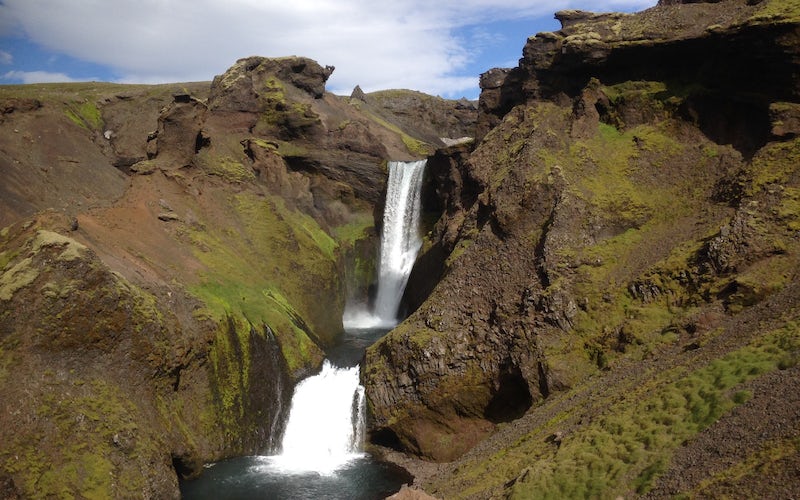 Further along the Skógar River

Often the most magical spots are nestled away from more touristic routes, to be stumbled upon suddenly, should Iceland chose to reveal itself to you. There is something about Icelandic waterfalls that can hypnotise and draw people in. The immense power of water that thunders down in strange patterns and soaks any who approache is something otherworldly. A visit to Iceland is incomplete without taking in some of the country’s powerful and wild waterfalls.