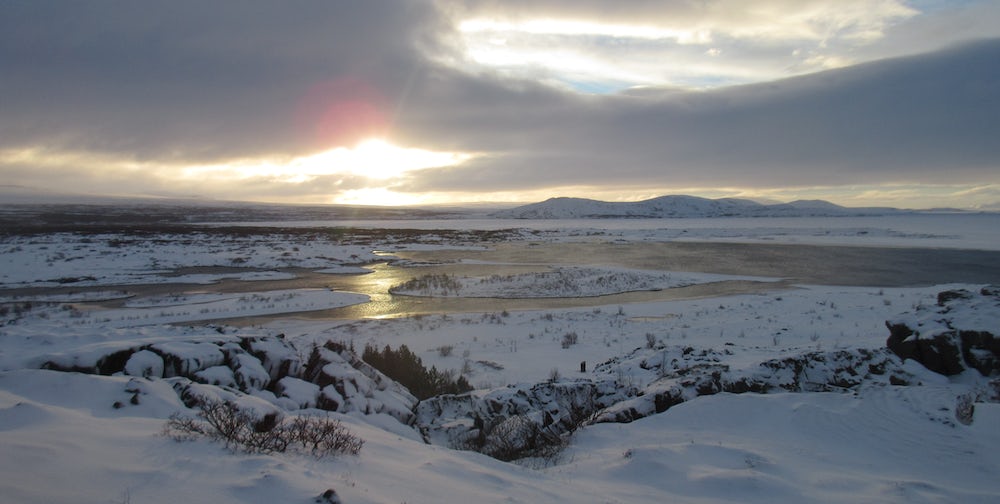 A trip through the terrain covered by Njáll's Saga, one of the most famous, and most colourful, of the Icelandic Family Sagas, brings visitors through some stunning places in Southwestern Iceland.

Following the trails of the Icelandic sagas means retracing a long and eventful chapter in history and legend. This is, after all, where Icelandic literature — at least, the idea of a literature belonging specifically to Iceland — began. With an adventurous spirit and some reading, it’s possible to retrace the events of several sagas, one family feud at a time.

Njáll’s Saga, perhaps the most famous, is a good place to begin, as it contains some of the most famous scenes and characters of saga literature, including the thoughtful titular hero, and his friend Gunnar, a honourable man of action. A journey through its main storyline makes an easy day trip from Reykjavík, covering some breathtaking territory throughout the southwest of Iceland, as well as a few places that are best appreciated with a little background knowledge. It’s possible to pick up a copy at most bookstores and museum shops in Reykjavík: bringing it on the tour is a good idea.

This is a good trip for late winter or early spring. The light is increasing, but the weather is still unpredictable, so be aware of changing conditions. The main roads are generally good but dependent on weather; minor and gravel roads require more caution. Bring a good map and rain gear, and watch for road signs. Leave before 9:00, and you can be back by early evening.

The best place to start is Þingvellir National Park. As a part of the Golden Circle, a tourist favourite, the ground of the country’s first parliament is well-trodden, and for good reason. It is strikingly dramatic, rich in history, and — most crucially — the scene of legal wrangling and pivotal decisions in several of the sagas. Its placement, on the continental divide between Europe and North America, makes for jagged cliffs and sudden slopes, rising over a wide lake. 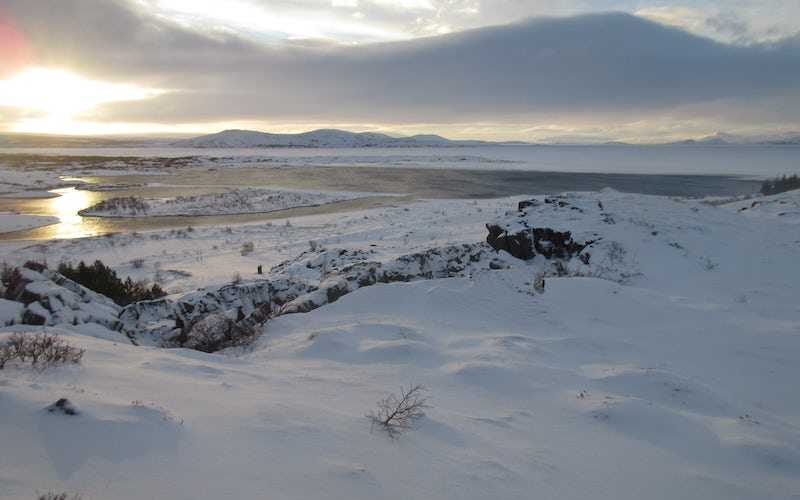 In Njáll’s Saga, the assembly at Þingvellir kicks off the action as early as Chapter Two, making it an apt starting point for the tangled personal and legal relationships that unfold through the story. Njáll, as a man of law, enacts some of his greatest victories here, in an attempt to avoid deadly feuding. Time in the saga revolves around the Þing — this is where characters ride together, as friends or foes, year after year, as the tension builds.

Breaking up the hour-and-a-half journey to the town of Hvolsvöllur, the next stop on the trail, means a slight detour to Skálholt Cathedral, the site of the country’s first bishopric. An eloquent speaker on Iceland’s religious history, its underground crypt contains the stone coffin of 12th-century bishop Páll Jónsson, and a 13th-century stone tunnel. It is open daily, from 9:00 to 18:00; services are 11:00 and 17:00 on Sundays. 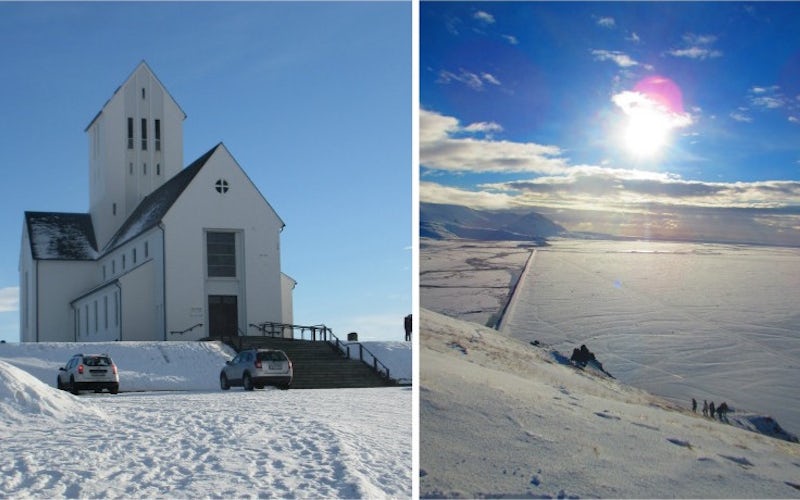 The Saga Centre in Hvolsvöllur is the place to go for Njáll’s Saga in its full scope. The museum reconstructs the events of the story, along with the history of Viking and medieval Iceland. Located in the heart of Njáll’s Saga country, the centre clearly takes pride in the area’s history, putting in prominence the medieval manuscript culture that gave us the sagas in writing. Be sure to take a look at the tapestry, recounting the story of wise Njáll, heroic Gunnar, and the rivalry between their wives, in painstaking detail and colourful thread. The centre is open daily from 15th May to 15th September, 9:00-18:00, and from 16th September to 14th May, weekends from 10:00-17:00, or by arrangement.

Stopping for lunch (which must be ordered in advance) at the Saga Centre is part of the experience. The decor of the hall is an homage to the Viking Age, all rough-hewn benches and exposed beams, and the soup, bread, and coffee are deliciously warming. With the long tables and the low lighting, it’s easy to imagine yourself a part of the saga. Other lunch options include Eldsto Art Café and Bistro, Gallery Pizza, and the nearby gas station — or, in fair weather, picnicking outside.

From here it becomes necessary to go off the beaten path. It is a short ride east along route 261 to the purported site of Hlíðarendi — watch for the red-and-white church to your left. This is where Gunnar, the saga’s most admired character, took his final stand. It is here that the view so entranced the hero that he chose to stay in Iceland, and face certain death, rather than to survive in exile. For this stop, bring a copy of Jónas Hallgrímsson’s poem ‘Gunnar’s Holm,’ one of the most arresting depictions of this scene. Gazing at the landscape, it is easy to see why Gunnar’s rejection of exile has become an iconic part of the saga. 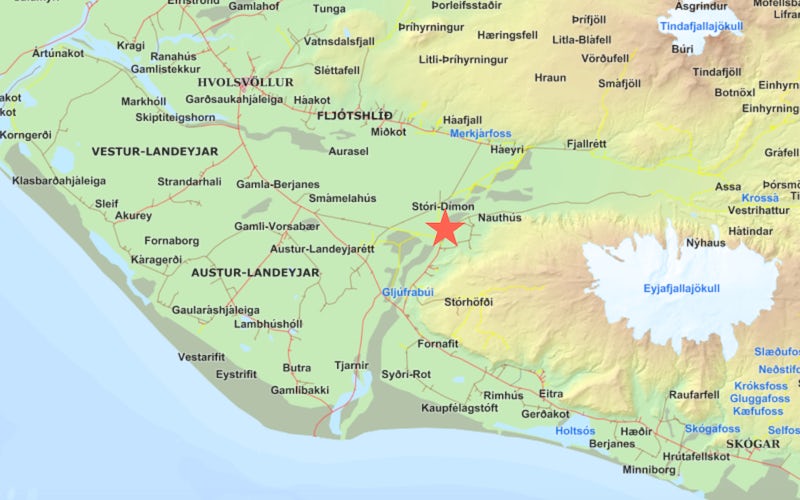 Stóri-Dímon's location on a map

Following this, take route 261 to route 250 (Dímonarvegur), and take a hike to the top of the hill Stóri-Dímon, above Markarfljót. This is the place where Skarphéðinn, Njáll’s eldest and most tempestuous son, ambushes and kills several of his enemies. Now it stands peacefully above the landscape, rising starkly from the plain surrounding it. At 178 metres, it’s a short hike, but with all the crevices and crannies in the rock, it’s easy to see how Skarphéðinn and his companions hid until the last minute. Go while there is ice on the nearby rivers, and it will look just as it did before the deadly fight. A crisp winter day affords magnificent views from the top.

The climactic scene occurs at Bergþórshvoll, with the burning of Njáll’s farmstead. Continue down route 250, turn left on route 1, and take a left on route 253 (Bakkavegur). After the mountain, the quiet houses and fields may seem anticlimactic — modern farms and a guesthouse have replaced the ruin of Njáll’s and Bergþóra’s house. It’s the most stunning contrast between the saga and the present, and while the views from Hlíðarendi and Stóri-Dímon are more dramatic, there is a sense of denouement in seeing the fields restored to peace after their turbulent history. Of course, with enough people, it is possible to re-enact the drama, though we do not recommend taking this too far.

Sadly, some of the final saga scenes depict the Battle of Clontarf, near Dublin, making them a little difficult to reach. If you’re taking a stopover in Iceland en route to Ireland, it’s certainly a good follow-up! Otherwise, your tour ends with a return to Reykjavík, the fire of the sunset taking the place of the flames in the saga. And so, in true saga fashion, ‘here we end the trail of Burnt Njáll.’