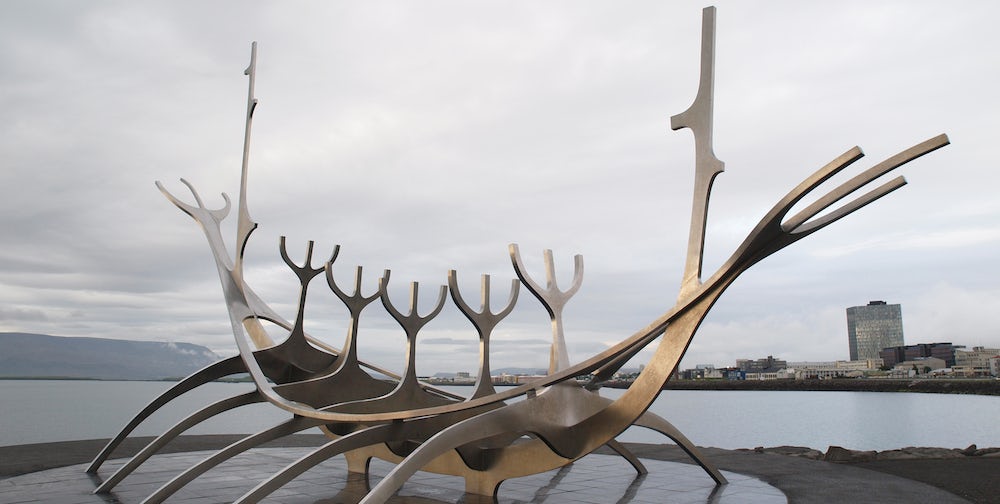 Most people that travel to Iceland don’t make long stops in Reykjavík. If you can tear your eyes from the beautiful mountains surrounding the city, you will notice that downtown Reykjavík is literally covered with outdoor art.

Here we suggest some must-see outdoor art evenly spread out over the greater downtown area. Follow this guide and you’re sure to see both some great art and parts of the city you otherwise might not.

1.  Memorial to the Unknown Official 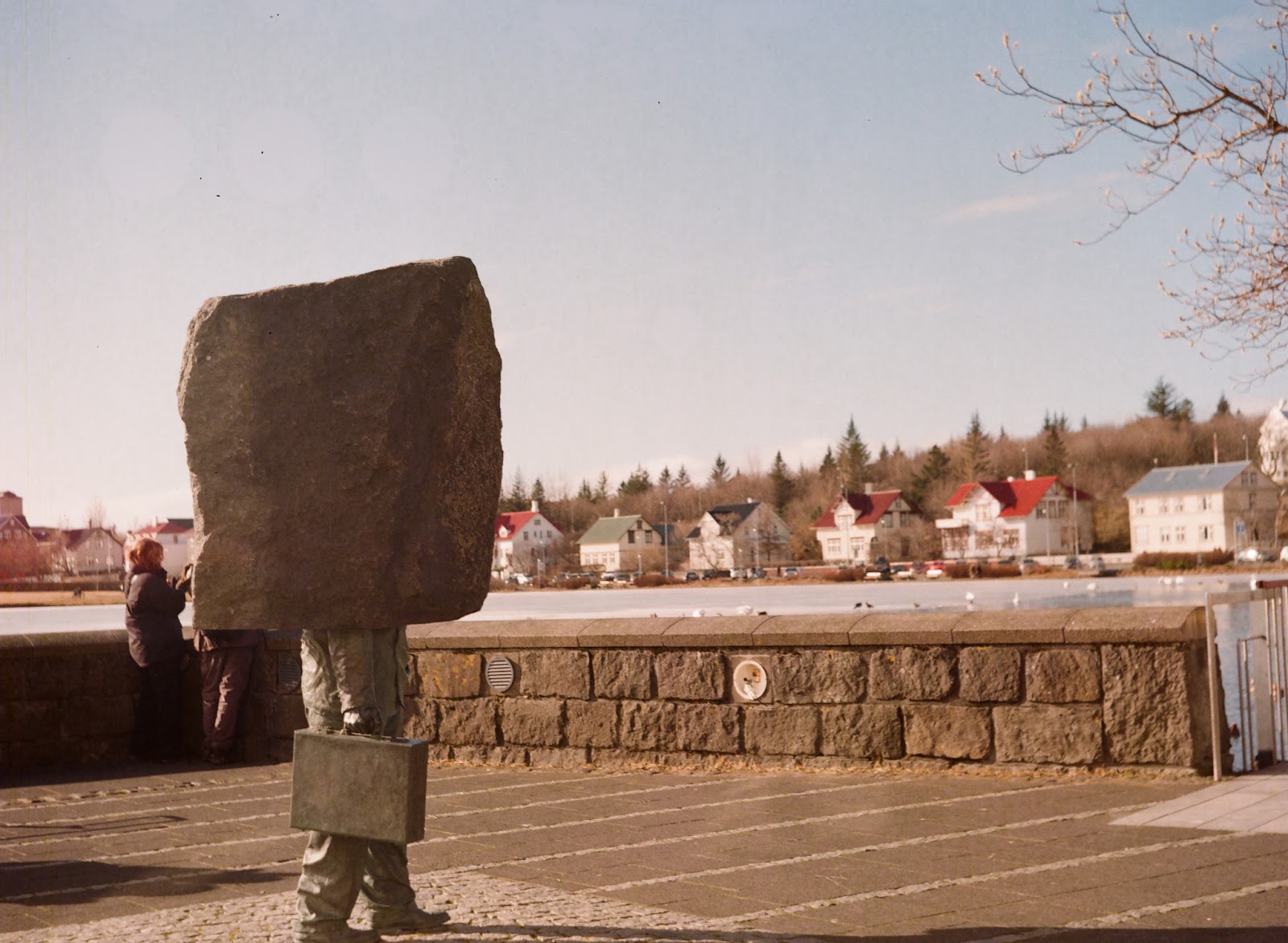 This beautifully ironic sculpture is dedicated to all those nameless officials and bureaucrats that keep society running. Recognizable only from his suit and suitcase, the entire upper body of the subject is left unhewn from the rock – who remembers the faces of bureaucrats anyway?

What else can I see around there? Check out world-renowned sculptor Bertel Thorvaldsen’s 1808 sculpture of Adonis. The Greek legend stares out over the pond, every bit as self-content as you would imagine him to be in real life. If you are looking for something more current, Santiago Sierra’s powerful Memorial to Civil Obedience can be found right outside parliament, where just about every single protest in Iceland takes place. 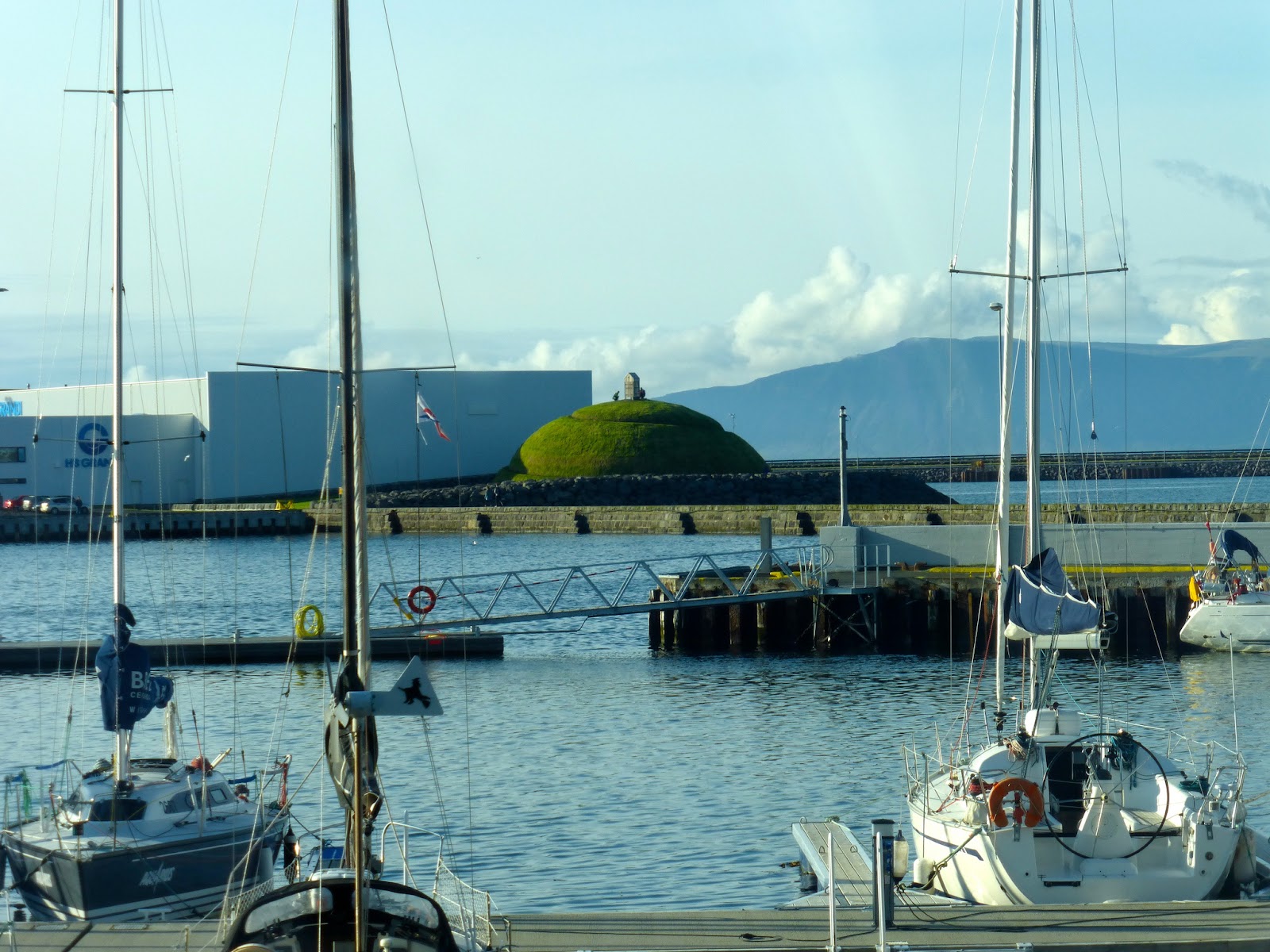 The Hill towering over the old Reykjavik Harbour. Flickr/Claire Cox

The Hill is not really a hill, but an oversized hummock (or hillock, depending on who you ask). On the smaller scale, hummocks are one of the most prominent things of Iceland’s landscape – these tiny ubiquitous mounds of grass often go unnoticed. Ólöf Nordal’s interactive and eco-friendly sculpture lets you climb 8 meters (26 feet) to the top, and rewards you with a great view of Mount Esja, Harpa and downtown Reykjavík.

What else can I see around there? Sigurður Guðmundsson’s Heimar í heimi (Worlds in a World) was commissioned by video game producer CCP, most notably responsible for massive online game Eve Online. It features the usernames of all active players minutely edged in metal and caused some stir when rival players were caught vandalizing the sculpture, scratching each other’s names from the surface. 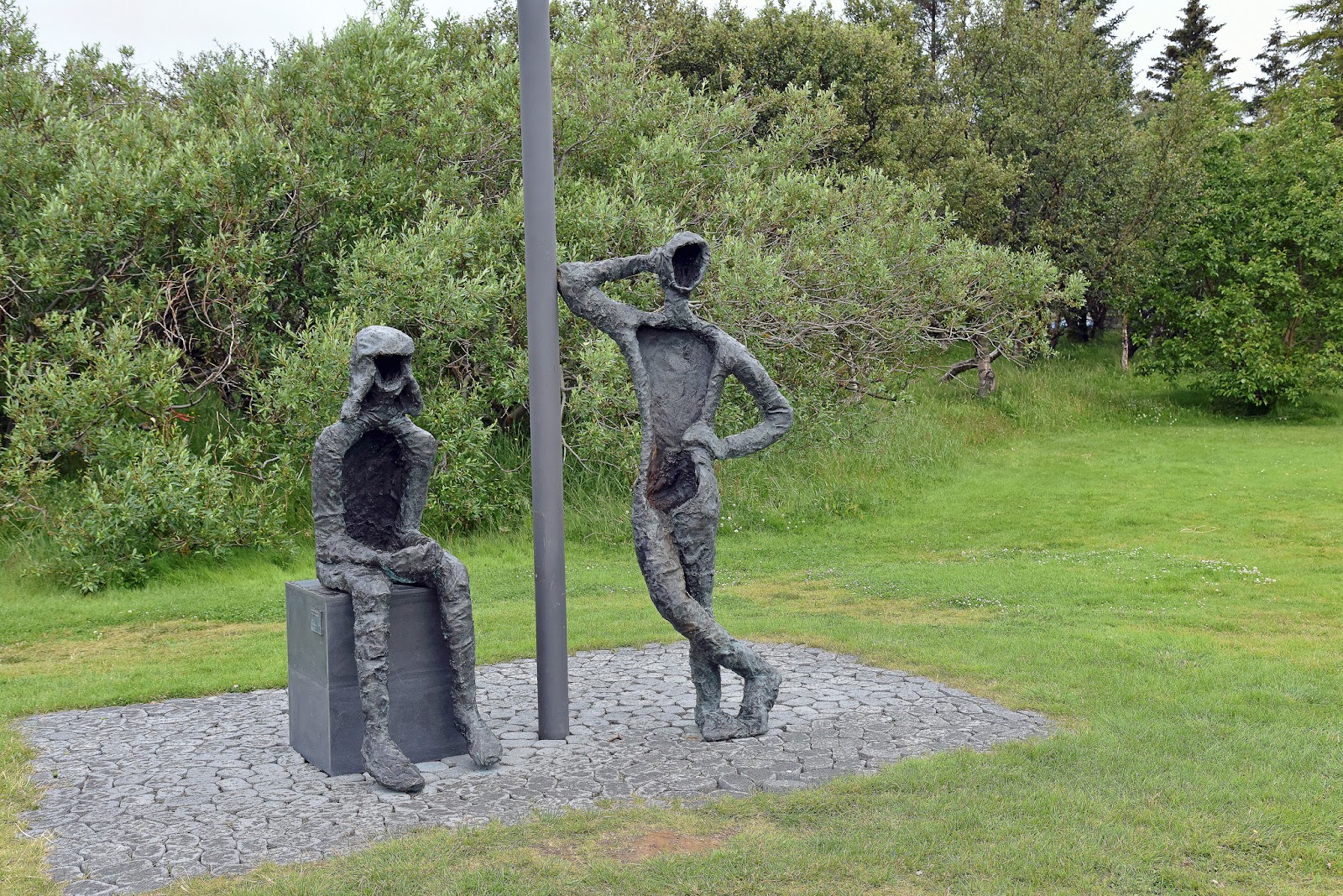 The Pearl Necklace is a collective of various sculptures made exclusively by women sculptors. The sculptures were gathered together and installed on the southwest bank of Tjörnin pond in 2014.

The most noteworthy of the sculptures is The little mermaid by the renowned sculptor Nína Sæmundsson. It is inspired by folktales about a mermaid that sang beautifully to entice sailors fishing close by. Some might argue that this very folktale was the inspiration for H.C. Andersen’s tale of the little mermaid, later made famous by Walt Disney.

The mermaid is actually a replica since the original sculpture was blown up on new year’s eve in 1960. This brutal vandalism caused outrage amongst Reykjavik’s inhabitants and the authorities decided not to replace it any time soon. Fifty-four years went by until it was replaced, when the Pearl Necklace was inaugurated in 2014.

What else can I see around there? If you walk alongside the west bank of The Pond, heading towards down town Reykjavik, you’ll come by a nice little sculpture of a man sitting on a public bench. This particular man is the poet Tómas Guðmundsson, one of Iceland’s greatest 20th century poets. He is often dubbed “The poet of Reykjavik” as the city is often the main topic of his poems. 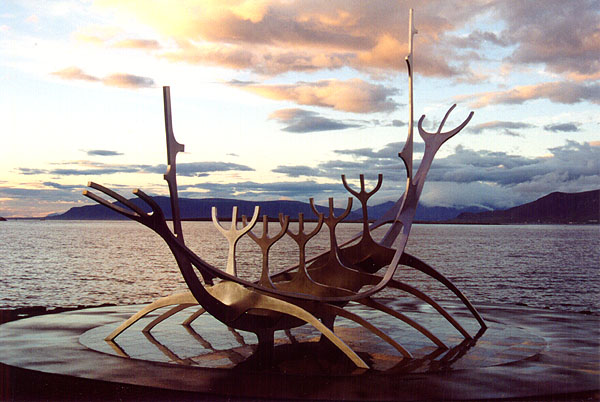 This majestic skeleton of a ship stares out to sea, always as if it was about to embark on a long voyage. It has in recent years become a favorite with tourists, both because it is conveniently located close to downtown Reykjavík, and because it offers some of the most spectacular photo opportunities in the whole city: With the Sun Voyager in foreground, and Harpa and Mount Esja in the backdrop, the vivid colors of the midnight summer sunsets, or the northern lights in winter, are truly a great sight.

What else can I see around there? The city of Berlin recently donated a vibrantly decorated piece of the old Berlin Wall to Reykjavík, and there is no place more appropriate than Höfði, one of the most historically relevant places in Reykjavík: It was the venue for Reagan and Gorbachev’s 1986 meeting, often mentioned as a major catalyst for ending the cold war. You can find Höfði a short walk by the seaside from the Sun Voyager. 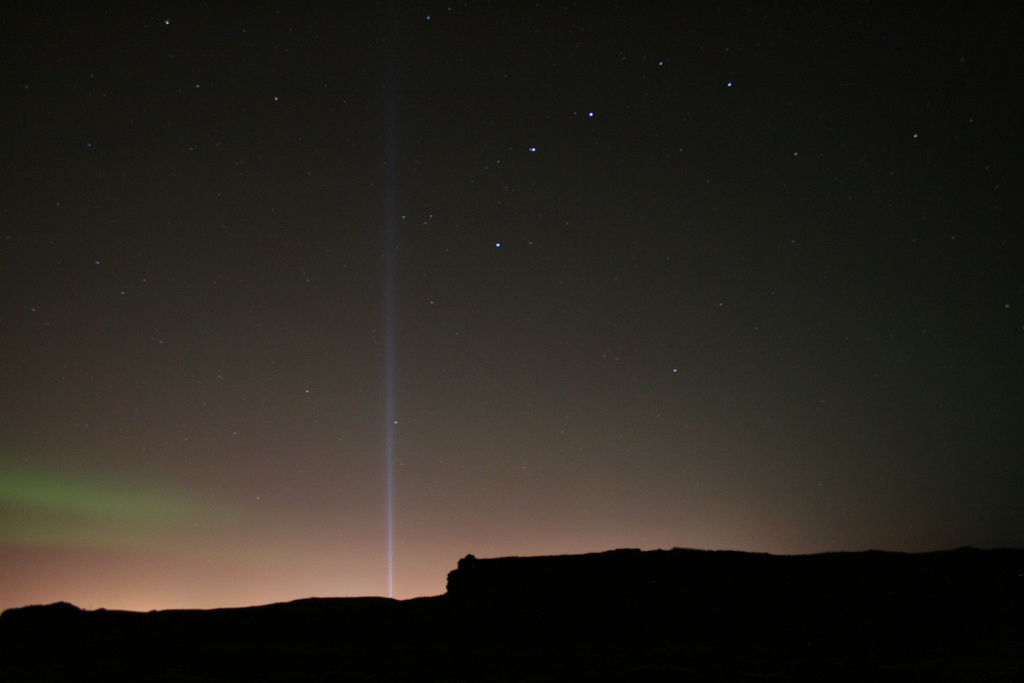 Seen up close, Yoko Ono’s Imagine Peace Tower resembles a wishing well, with the words “Imagine Peace” inscribed in 24 languages. During the winter months, when it is dark enough, it emanates a strong pillar of light, that can be seen from all over the city. It is a call for world peace, with all of  Lennon and Ono’s undying zeal.

You can explore the piece by yourself or book a special Imagine Peace Tower ferry tour.

What else can I see around there? Viðey is also home to Richard Serra’s 1990 sculpture Áfangar (Stepping Stones). It is a homage to Iceland’s iconic columnar basalt formation and as is usually the case with Serra, towers above everything in its surroundings, in this case the empty fields of Viðey. These solid rock pillars offer a great counterpoint to Yoko Ono’s more impalpable pillar of light.

Ásmundarsafn is a museum dedicated to Iceland’s own Rodin, Ásmundur Sveinsson. The museum itself is fairly small, but the museum grounds are covered with some of his most impressive work, and free to anyone to wander around in. Most of his sculptures are variations on or distortions of the human form, and in his more abstract work the organic curves feel as they could spring to life at any time.

What else can I see around there? Go to Klambratún (sometimes called Miklatún). Klambratún is a nice public park where you can find various sculptures. If you are walking from Ásmundarsafn to Reykjavik city center, Klambratún is on the way. 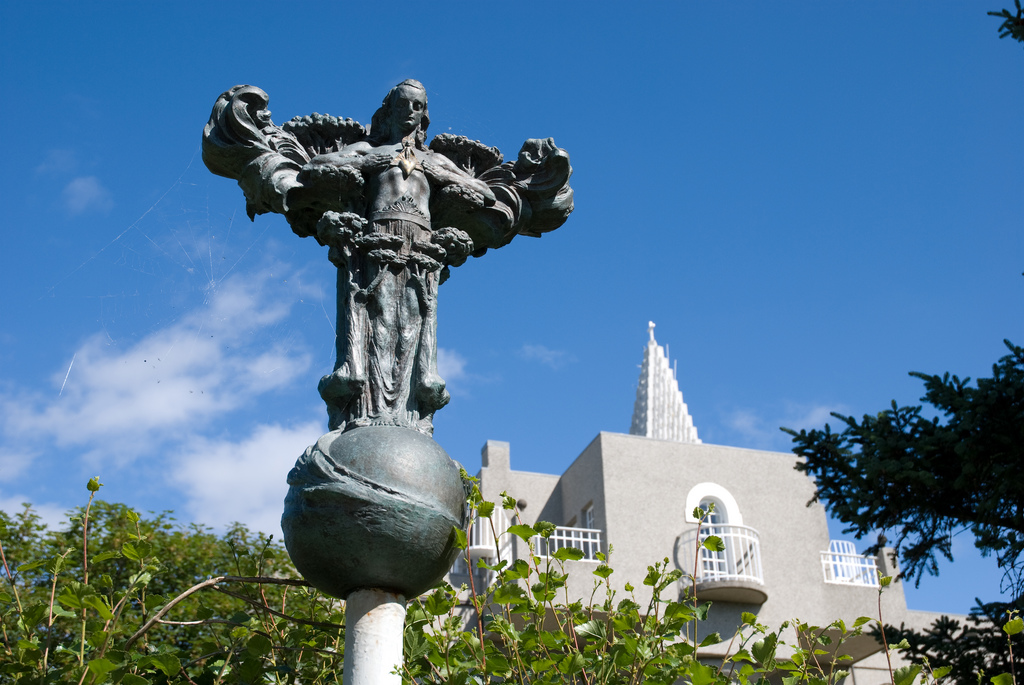 A rather dramatic piece by Einar Jónsson. Hallgrimskirkja's tower in the background. Flickr/Thomas Quine.

Einar Jónsson’s style is something truly unique in Icelandic culture. Most of his work is from the early 20th century and echoes the hypermasculine styles of art in Nazi Germany or Fascist Italy. Strong form and structure are decorated with impeccable detail and the sense of drama is almost tangible (and admittedly sometimes over the top).

The subjects follow suit and are usually taken either from the Icelandic sagas and Norse mythology or from the Bible. The sculpture garden is located behind the Einar Jónsson Art Museum, right next to Hallgrímskirkja, and is open to all visitors.