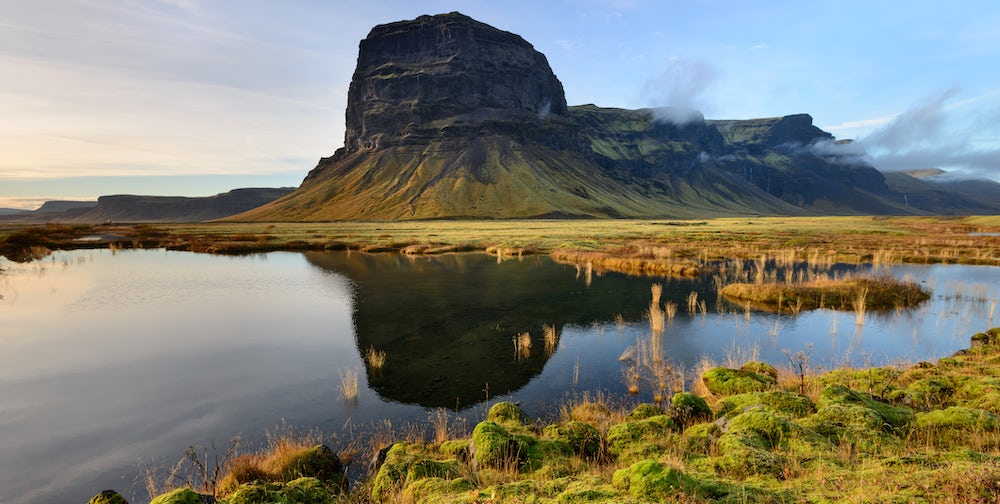 Don't miss out on these stunning attractions if you're in the Kirkjubæjarklaustur area, in the southeastern region of Iceland.

Kirkjubæjarklaustur is a town of only 120 inhabitants, situated by the Ring Road in southeast Iceland. This tiny little town is the only densely populated area in the region, Vík is the closest town to the west (42 miles away) and Höfn to the east (127 miles away).

For this reason, roadtrippers often make a little pit stop in Kirkjubæjarklaustur to fill up the gas tank and get some refreshments before continuing driving the Ring Road.

Kirkjubæjarklaustur is, at least in historical terms, quite remarkable. The name of the town, which is often shortened to “Klaustur”, translates roughly to “Church Farm’s Monastery”. For those who are familiar with Iceland’s history, it might seem odd that a town is named after a monastery, as the settlers of Iceland were pagan Vikings.

But in fact the Vikings weren’t the first settlers of Iceland. Before the Norse settlers arrived in Iceland, a small population of Irish hermits is said to have lived in the area that’s now Kirkjubæjarklaustur. During the Norse settlement, the Christian inhabitants supposedly banned all pagans to set foot in Kirkjubæjarklaustur. A Benedictine convent was founded at Kirkjubær in 1186 and it was active until 1550, when Icelanders converted from Catholicism to Lutheranism.

The nature surrounding Kirkjubæjarklaustur is interesting as well and you notice stark contrasts of the landscape wherever you look. To the east, there’s the largest glacier in Europe, Vatnajökull, and to the southeast there’s the greatest sand plain in Iceland, Skeiðarársandur. The surrounding area has been marked by volcanic activity. Two of Iceland’s fiercest volcanoes are located not too far from Kirkjubæjarklaustur, the former one is Katla in Mýrdalsjökull glacier and the latter one is Lakagígar in Vatnajökull glacier.

Lakagígar (also called Laki) erupted in 1783. The eruption lasted for months and killed several million people throughout Europe. Some have concluded that this disastrous eruption was probably the deadliest volcanic eruption in history.

If you want to know more about the rich history and nature of Kirkjubæjarklaustur, I suggest you visit the town’s official website.

Like I already told you, there are a lot of interesting sites worth exploring in Kirkjubæjarklaustur. Here are my personal favourites: 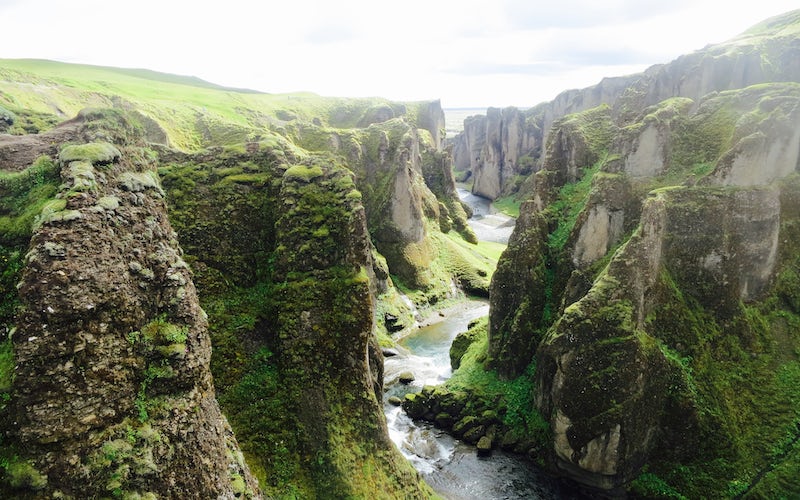 Fjaðrárgljúfur is a 1.2 miles long and 330 ft. deep canyon, formed around nine thousand years ago, at the end of the last Ice Age. There’s a river that flows through the canyon called Fjaðrá. The canyon isn’t exactly in Kirkjubæjarklaustur but it’s just a few minutes drive to the west.

Although Fjaðrárgljúfur is located only 2 miles away from the Ring Road, it’s not completely accessible by car. You will have to park at a parking lot and then there’s a short hike that leads you to the canyon. The hike is very easy and takes you through a very lovely scenery. 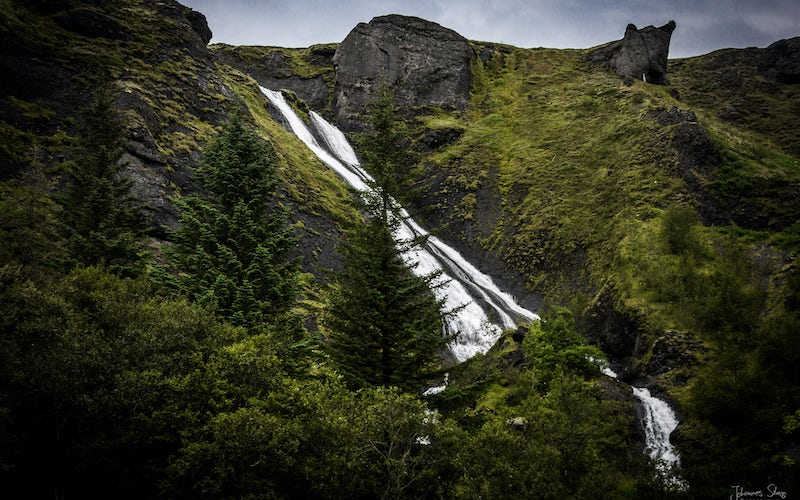 “Sisters’ Falls” are probably the most famous highlight of Kirkjubæjarklaustur. The falls are located in the middle of the town and can easily be seen from the road.

It’s possible to hike along the falls and all the way up to the edge of the mountain, which I highly recommend doing. The hike takes around 10 minutes and is not demanding at all.

When you’ve reached the top of the hill, you’ll come across a serene lake called Sisters’ Lake. According to the legend, nuns from the Benedictine convent I told you about earlier used to bathe in the lake and one time, when two of the sisters were bathing, a hand holding a gilt comb arose from the water. The two nuns tried to reach it and then mysteriously disappeared. 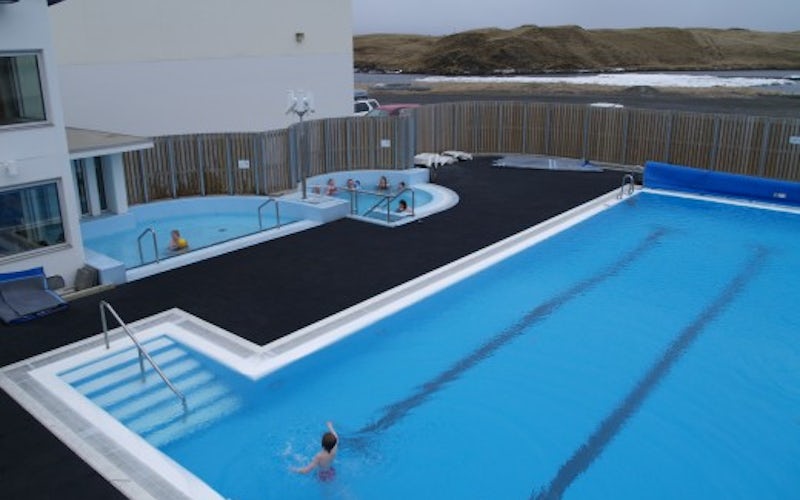 Those who have traveled around Iceland probably know that you can find outdoor swimming pools in almost every little village in the country. I can honestly not think of a town in Iceland that doesn’t have one.

The swimming pool in Kirkjubæjarklaustur is very decent – it consists of two hot tubs and a pool. There’s a small slide for the kids too.

I had trouble finding it when I went there the other day and my first impression wasn’t great, to be frank. It turned out to be a very nice pool, and there’s a beautiful view over a small waterfall in the mountain next to the pool. 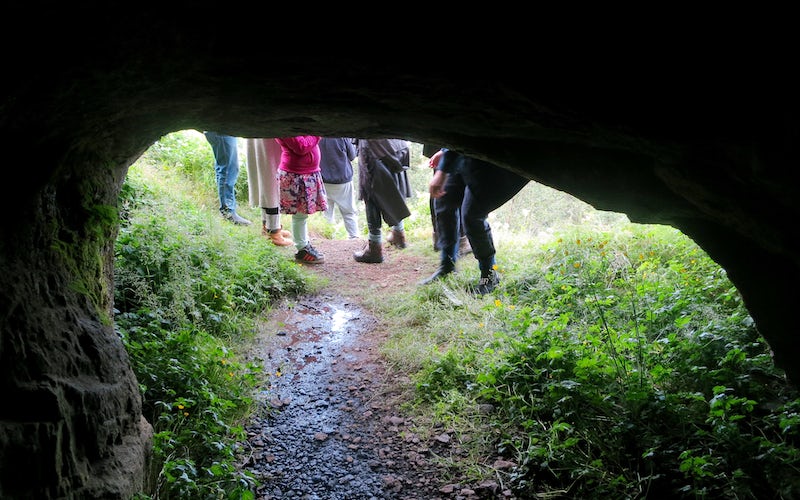 Sönghellir is a cave, located just a couple of metres from the Sisters’ Falls. You can take a small detour while hiking up along the falls to visit the cave. The area is very well marked so you’ll find the path right away.

“Sönghellir” translates to “Cave of Song”. The name is also connected to the nuns – they are said to have held choir practices inside the cave.

I dare you to follow the nuns’ example and sing loudly while exploring the cave! 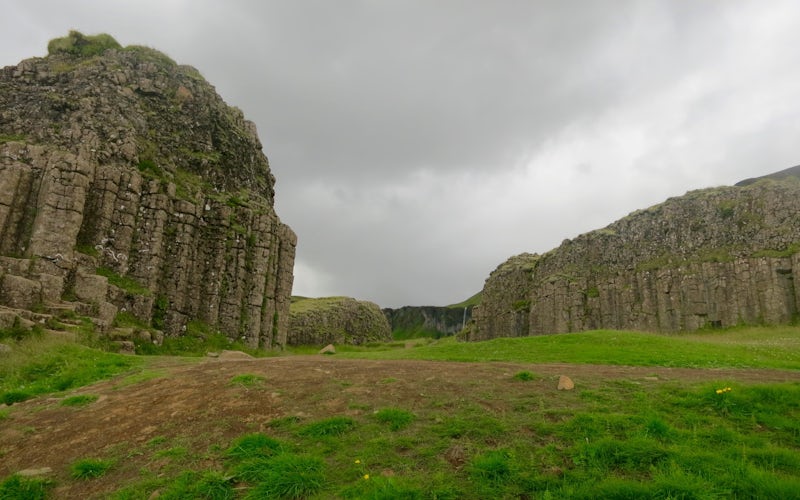 Columnar basalt is quite common in Iceland and if you pay close attention to Reykjavik’s architecture you might see resemblance to this gorgeous natural phenomena. 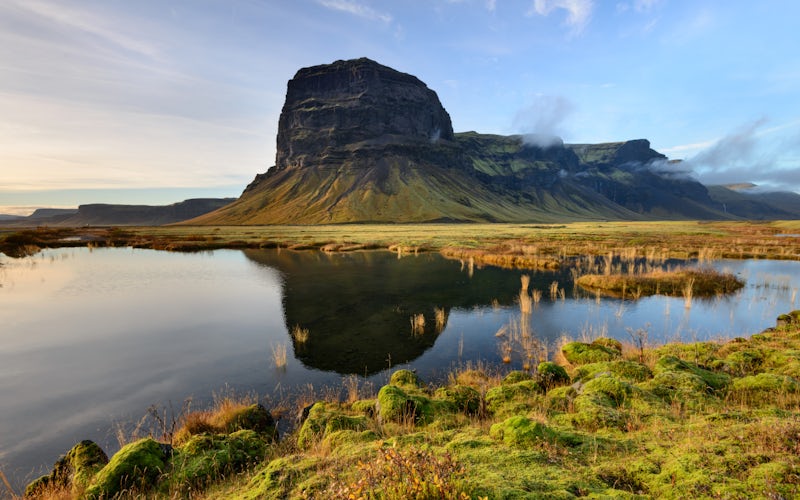 I really felt I had to mention a cliff called Lómagnúpur, although there’s no specific place you can park and see it up close and take pictures. In my opinion there’s really no need to since it can be seen very well from the Ring Road.

Lómagnúpur is known for its stunning beauty and it has a place in the Icelandic Sagas too. Those who are familiar with Njáll’s Saga might remember when Flosi, one of the characters, dreamed that a giant walked out of a big crack in the cliff, holding an iron staff in his hand. This dream was in fact a bad omen, but since I don’t want to spoil the main plot of this fascinating piece of literature for you I will not go into details here.

Some of you might be thinking about whether it’s possible to hike Lómagnúpur. I haven’t done it myself but I know it’s possible. You will have to hike it from the side that’s not facing the road and the hike takes 7–8 hours, even though the cliff is only 2200 ft. tall. You can check out this trail if you’re planning to conquer this majestic cliff.

Fjaðrárgljúfur: A Gorgeous Canyon Made Famous by Justin Bieber
Story