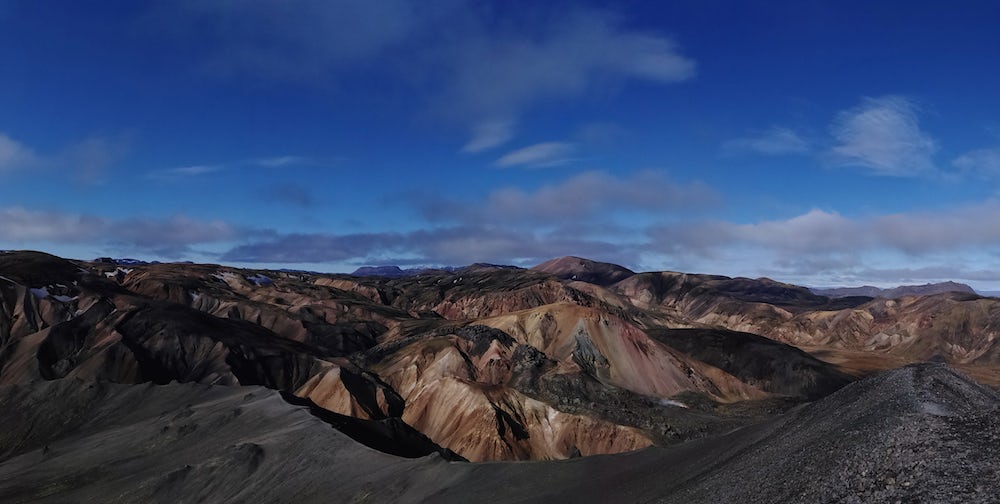 Landmannalaugar is a unique and remote hiking destination in the southern Icelandic Highlands. It has been considered by many to be the most beautiful place in the world. The region is characterised by psychedelic rainbow coloured mountains, steaming hot springs and geothermal pools ideal for bathing.

Landmannalaugar is a mountainous hiking destination nestled within Iceland's Fjallaback Nature Reserve. It is part of the vast desert Highlands, an area covering the centre of Iceland - the most remote and untouched region of the country. I spent three days in September, at the end of the hiking season, exploring the mountains around the campsite, and over these three days experienced three seasons of weather. 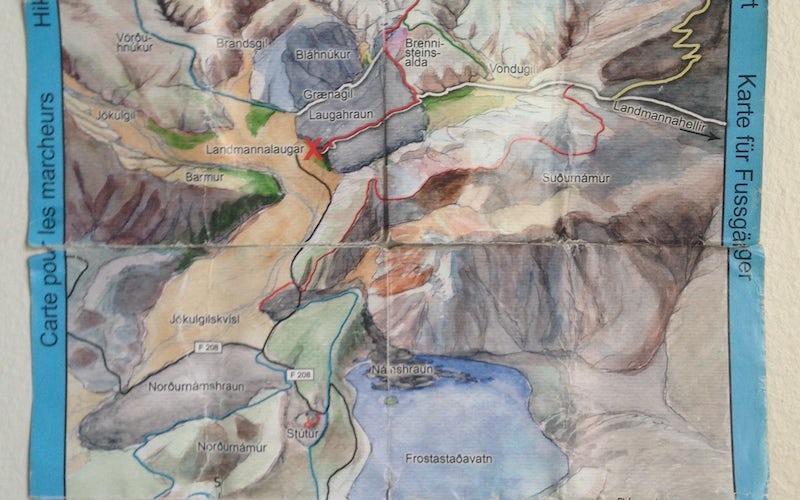 Map I used during my visit

The night before I go to Landmannalaugar I dream about the mountains. Barren earth that stretches over everything, plants that grow close to the ground. Black sand settled over so many years.

I am in Landmannalaugar for three days. The road from Hella into highland is long and winding and flat and deep wild black. Red mountains push out of the earth. F roads zig zag and weave through space, and we follow. Only four by fours can traverse this terrain, the long bumpy and winding roads that lead into the heart of Iceland. The landscape here is wild and black and alien, a dark desert that extends forever, rising sometimes up into mountains and then curling ancient lava. Here is the primordial start of things, a land that remembers its origins in volcanic fire.

After two hours, arriving at the Landmannalaugar campsite, we are welcomed into a land where sun highlights mountains in golden shaking light. Today Landmannalaugar looks like the Australian outback, a desert land, with golden yellow mountains lined up in every direction. The earth is streaked in colour; pink, blue, green, red, brown, deep black, yellow, orange. 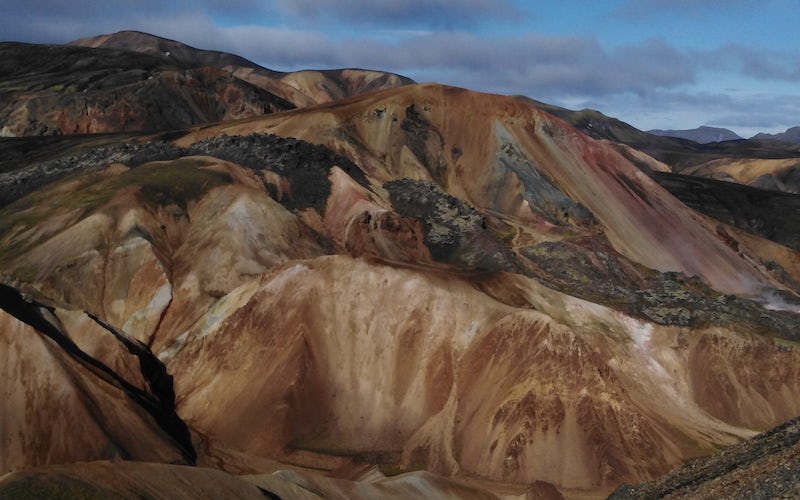 We walk the beginning of the Laugavegur trail, through strange black lava fields that under the sun become a part of the barren desert land. Approaching the edge of Laugahraun the earth flattens out into a vast deep valley that is encircled by immense mountains. Brennisteinsalda always sits at the edge of my peripheral, like a fleshy pink animal releasing steam, with huge rocky growths like horns.

We decide to climb her and approach from the West. The ascent is steep and slow, but at the mountain’s summit is unravelled a divine view; in every direction, and extending outwards, mountains gather like resting mammals. Strange colourful land runs over all these shapes, stretched tight like skin. 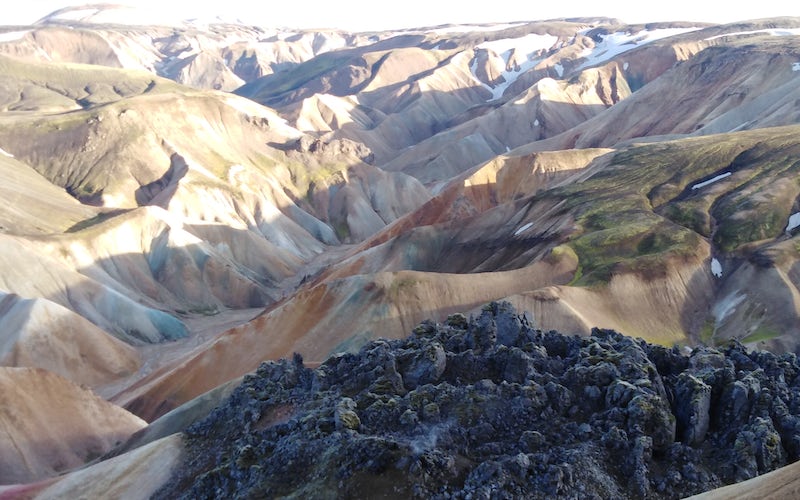 View from the top of Brennisteinsalda, over the Laugahraun lava field and surrounding mountains 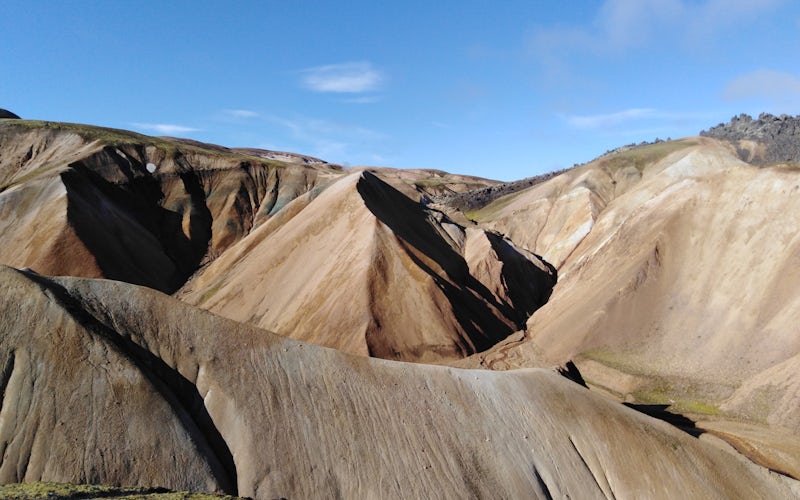 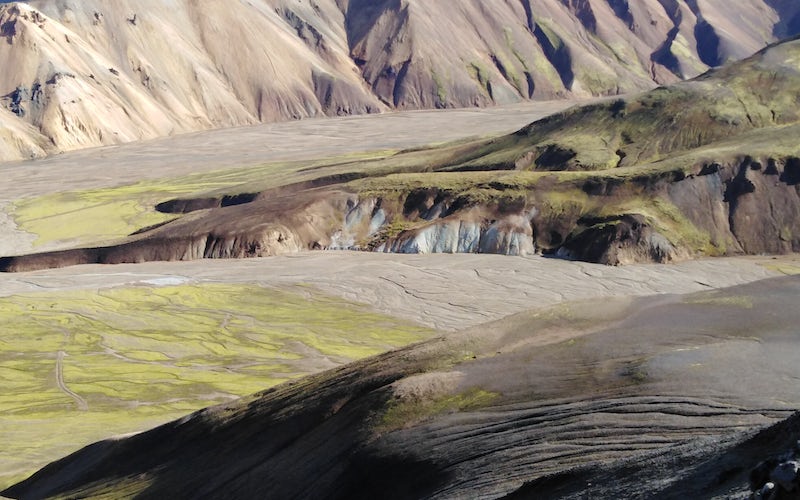 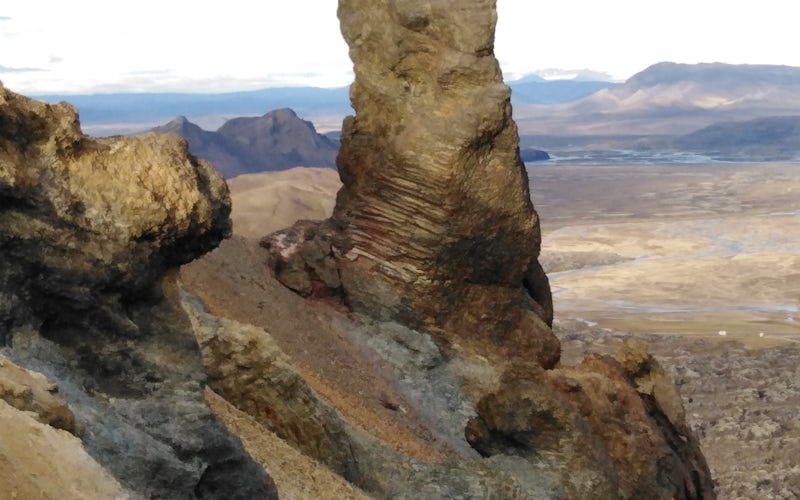 Climbing down we rejoin the Laugavegur trail, and pass pink and orange hot spring regions like wounds in the earth that hiss steam and bubble over. 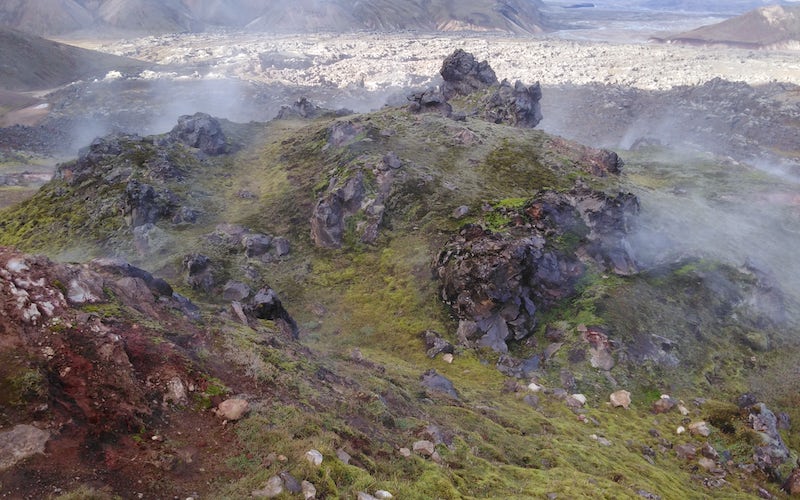 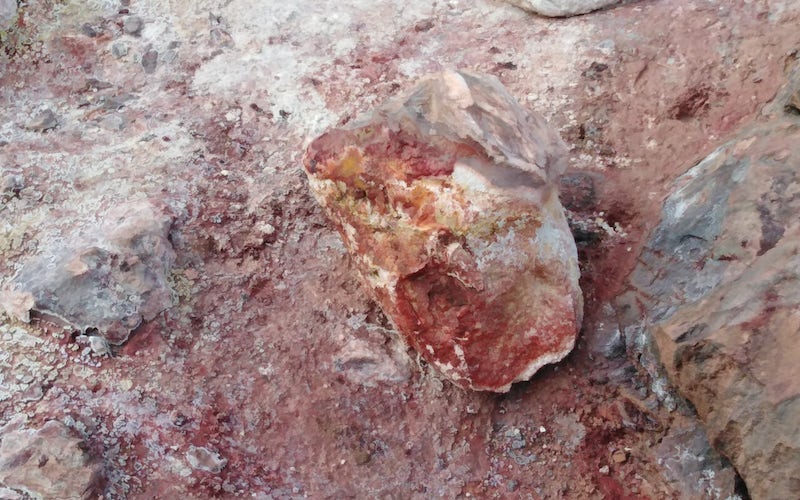 The emerging night drifts in with a soft green aurora. Floating in the hot spring, beneath the stars, I am aware of profound mountains all around, breathing steam in the dark. Weary travellers arrived in off of the backs of mountains gather in the hot spring to drink beer and rest and heal their muscles. I lay my head in deep green moss and melt into steam.

Over night a dense heavy mist has rolled in off of the highlands and submerged everything.

The mountains take on a new sensation, of deep mist with shapes emerging. Ancient green lines run over everything like tendrils coming out of coal.

Today the air is full of water and the colours are changed. It feels darker, denser. To move is to push through air and get soaked in rain.

Through the mist I approach Grænagil.

Horses walk in lines along the mist, preparing for the Rettir. 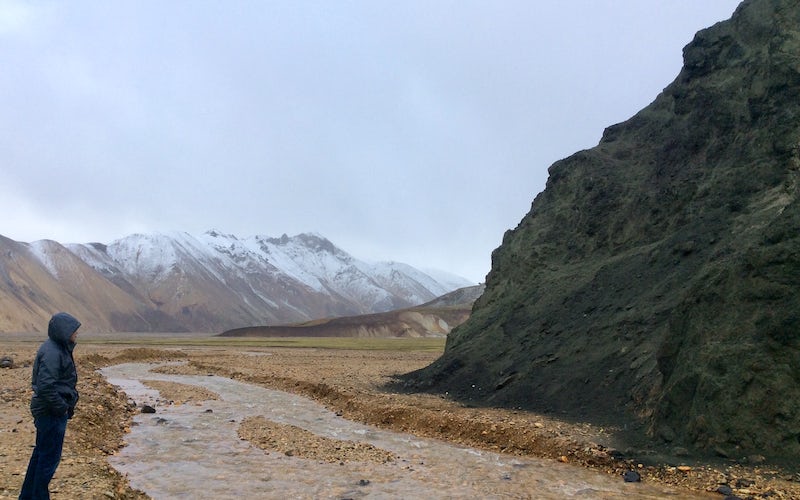 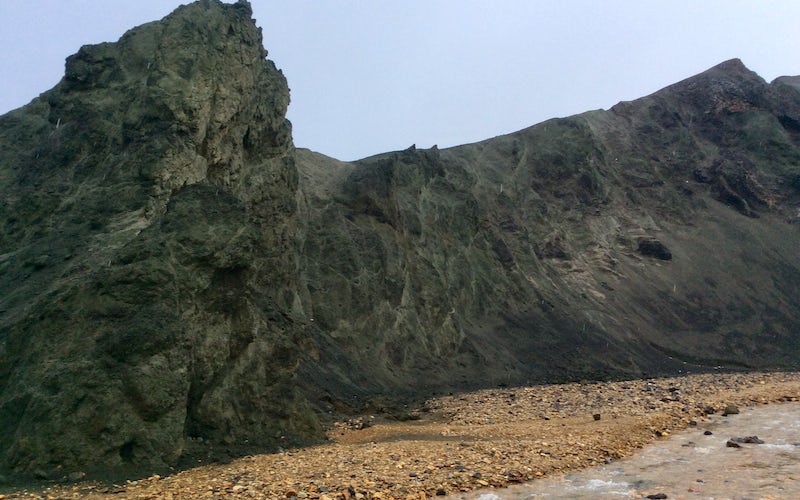 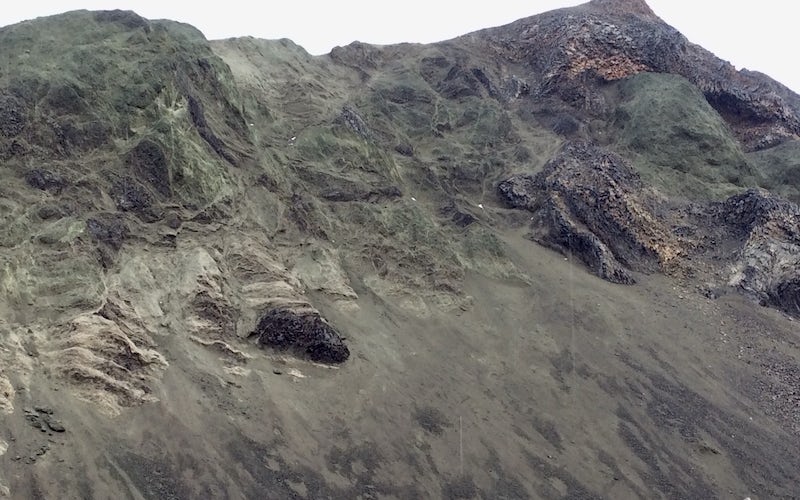 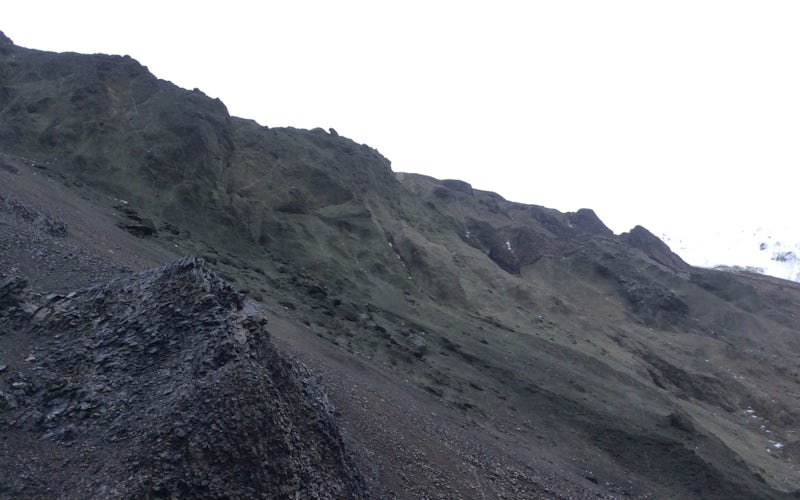 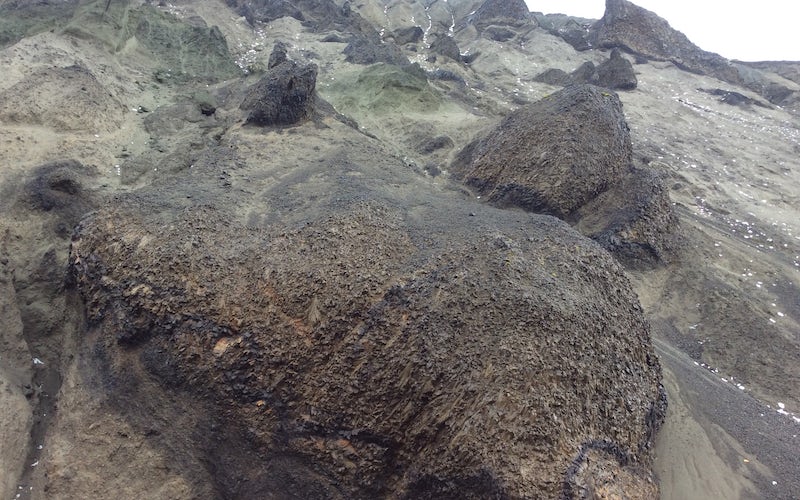 Looming out of white mist, Grænagil’s monumental green walls push out of the earth, zig zagged and undercut with green scars. Ancient wounds healed over like marks made two thousand years ago, like cave paintings in the mist.

The mountainside looks like something ancient risen from deep beneath the sea, pulled strangely into daylight. Shining glacial ice is revealed at times, pushing outwards from beneath layers of shifting grey and green sand, revealing something of the whiteness underneath.

The path guides me through green then blue, brown, and grey up towards Laugahraun. The strange black lava field once again unravels, distorting space and time in its unearthly hellish way. I climb upwards through sculptural black form, over holes bored deep into the earth and points reaching wildly out.

The pink blue green yellow volcano again looms ahead of me. I climb onto her back from out of the deep black lava. A black horned goat stands swaying in the immense wind. Up here is mist, total silence, and vast space. 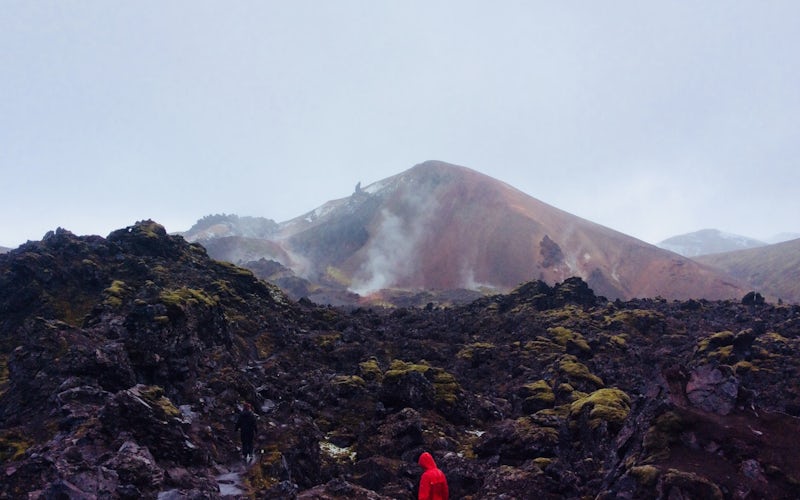 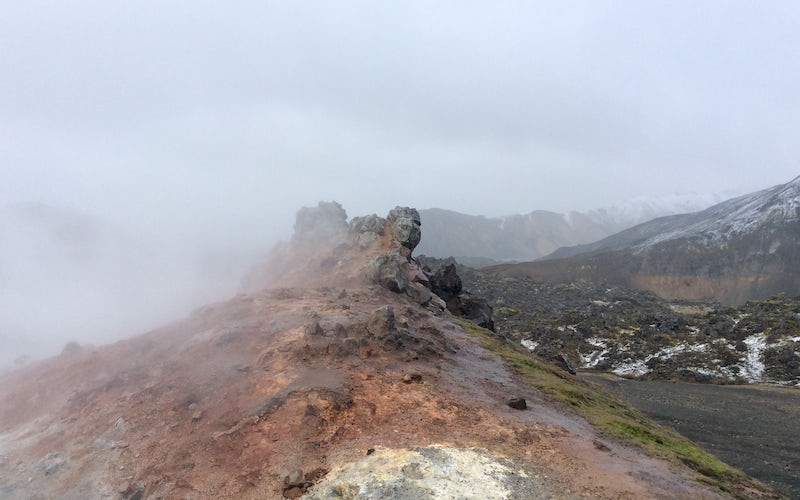 Hot spring activity at the bottom of Brennisteinsalda

As I climb her peak the wind picks up, howling and wrapping tendrils around and over that push me sideways. I try to force my way onwards but furious hail pushes me back. I long to reach the summit and experience again the magic view of sleeping mammal mountains, so push against the hail, onwards, upwards. From my immense height I see no other hikers, only the solitary swaying goat who regards me with wild alien eyes. Hail fires sideways from powerful alive winds and pushes me down to the ground. I can walk no further, and resign myself to defeat.

Brennisteinsalda has taken me in, tasted me on her tongue, and spat me out.

Back at the campsite

That night is cold and shimmering. My sleeping bag zip breaks and cold seeps in and the wind runs fingers through the campsite.

I again sense their profound presence - the mountains crouching round. Colour of vibration, speaking in form, hunger of lava. There is always more to unfold. The sensation of the land all around, pressing in. Hudulfólk in the sands.

Landmannalaugar has transformed into a strange silent white place.

Preparing for the Rettir, horses walk in lines across the campsite, over the snow. It is winter now and the land has passed through three seasons in three days. I drift in the hot spring, watched over by huge white mountains.

Today is the last day of the season, and the final bus prepares to return to the ring road. I say goodbye to the highlands, yearning already for my eventual return. 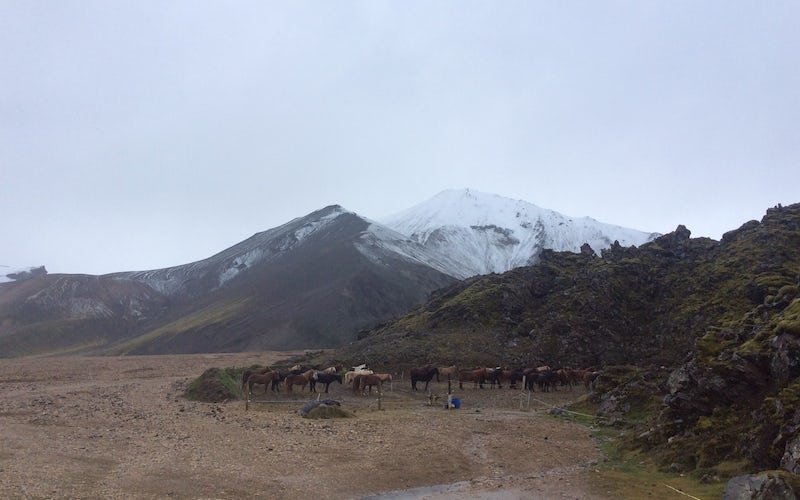 Horses waiting in the snow for the Rettir

What is so special about Landmannalaugar?

Landmannalaugar is remarkable because of its otherworldly hot spring activity, which colours earth pink and blue and releases steam upwards, its majestic and strange mountains, and its wild desolate hiking routes, taking you into Iceland’s heart. It is situated within the Highlands, in the Fjallabak Nature Reserve. The area’s mountains and earth are naturally streaked in rainbow colour, ranging vividly between pink, blue, green, yellow, orange, green, grey, and black. The Highlands, making up the central area of Iceland, are the country’s most remote part, and a paradise for hikers. Landmannalaugar is one of the most accessible and popular destinations within this region. It is bordered by the Laugahraun lava field, a very unique landscape that was formed during a volcanic eruption in 1477. Different hikes lead from the campsite around and through the lava field, offering a chance to explore its unique hellish formations.

The Rettir is the annual sheep and horse round up that happens all over Iceland in September. I was at Landmannalaugar at the end of the hiking season, so watched people gather on horseback at the campsite to begin the yearly job of searching for and bringing in all the lost sheep and horses from the region. Every year there are many farms all over Iceland where anyone can come and watch the rettir, and join in with the massive job of finding, bringing in, and identifying sheep.

How many hiking routes are in the area?

There are many hiking routes in the Landmannalaugar region, of varying lengths and difficulties. It is very easy, and I feel necessary, to spend several days in Landmannalaugar to experience all of the beauty and variation abundant here. The 40 mile/64 km Laugavegur trail from Þórsmörk (‘Thor’s wood’) is the most famous multi day hike in Iceland. It was named by National Geographic as one of the most beautiful trails in the world. This hike can also be joined with the one to two day Fimmvörðuháls trail between Þórsmörk and Skógar. Combining Laugavegur with Fimmvörðuháls will bring you all the way from the ring road to the heart of the southern Highlands, by foot, and take just under a week, depending on speed.

Other long routes that are possible from Landmannalaugar include the three to four day Hellismannaleið hike to the base of Hekla, an active Highland volcano surrounded by lava fields and desert lands. For those with less time or hiking experience, there are many shorter trails within the region. The two hour circle route from Landmannalaugar, through Laugahraun lava field, and up the Brenninsteinsalda (‘Sulphur Wave’) volcano, is a very popular and interesting route, one described in this article. Another popular short hike leads from Landmannalaugar up Mt. Bláhnjúkur (‘Blue Peak’), and takes one hour. A four hour hike leads to the Ljótipollur crater lake (‘Ugly Puddle’). There are many options in this region.

How do I get to Landmannalaugar?

To get to Landmannalaugar you need to cross into the Icelandic highlands. F roads do lead here, but they go through river crossings, and are passable only by using four by four vehicles. Throughout the summer months, regular buses lead into this region, from Hella, Mývatn, Skaftafell, and Reykjavík. It is also possible to hike on foot from Þórsmörk, Landmannahellir, Skógar, Hrauneyjar, Hólaskjól, and other highland regions. I have listed some nearby mountain huts below. Do not attempt the drive into the Highlands without an appropriate vehicle, as this can be dangerous.  It is possible to cycle to Landmannalaugar, but this should only be undertaken by experienced mountain bikers. Some buses do allow bikes on board. There are also organised horse riding tours to and around the region.

What facilities are at the campsite?

There is a Landmannalaugar mountain hut that houses seventy eight people over two floors, where anyone can stay for nine thousand ISK. It has a kitchen and running water. There is also a large bathroom area at the campsite with many indoor showers and toilets, and space to hang wet clothes and camping equipment. A warden is at the Landmannalaugar grounds all year round, and can be contacted by phone at +354 860 3335. The wardens live in a separate house on the campground.

It is also possible to camp in tents and use the facilities, but the ground is very gravelly, so tents have to be held down with rocks. The weather can get very cold and wild at any time of year, so if you intend to camp make sure to bring appropriate gear.

There is also a hot spring at the campsite, nestled in the foot of the mountains, where hikers can rest their weary bodies, and let the natural hot water heal after long journeys. Landmannalaugar actually means ‘the People’s Pools’. 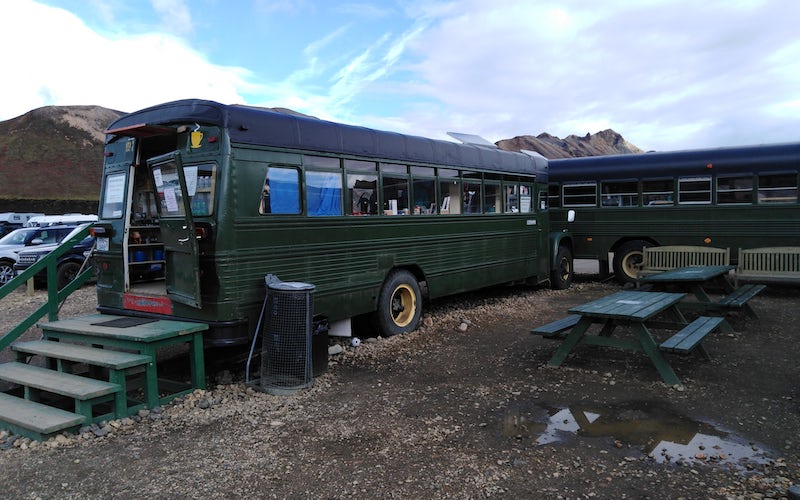 Mountain huts that are within hiking distance to Landmannalaugar: 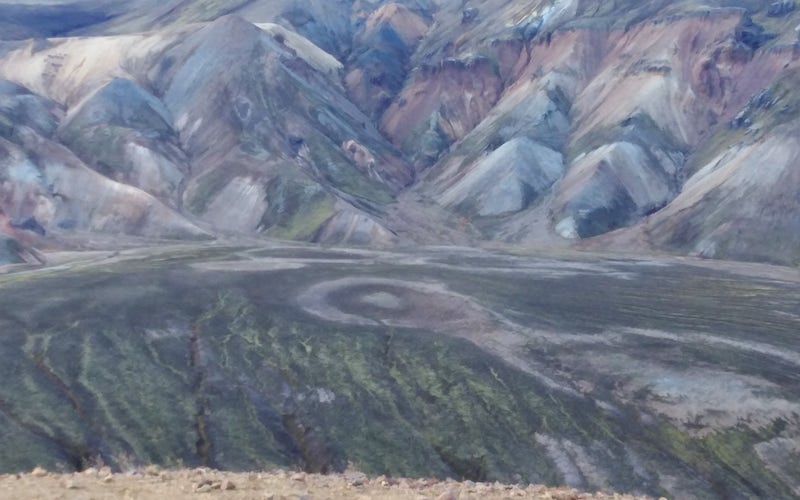 I sense their profound presence, the mountains crouching round.

This land that echoes itself, that pushes in every direction, and unravels.

And Brennisteinsalda, that great pink and blue volcano crouching down, ancient Japanese steam unfolding and releasing, one day she will stand up and walk.