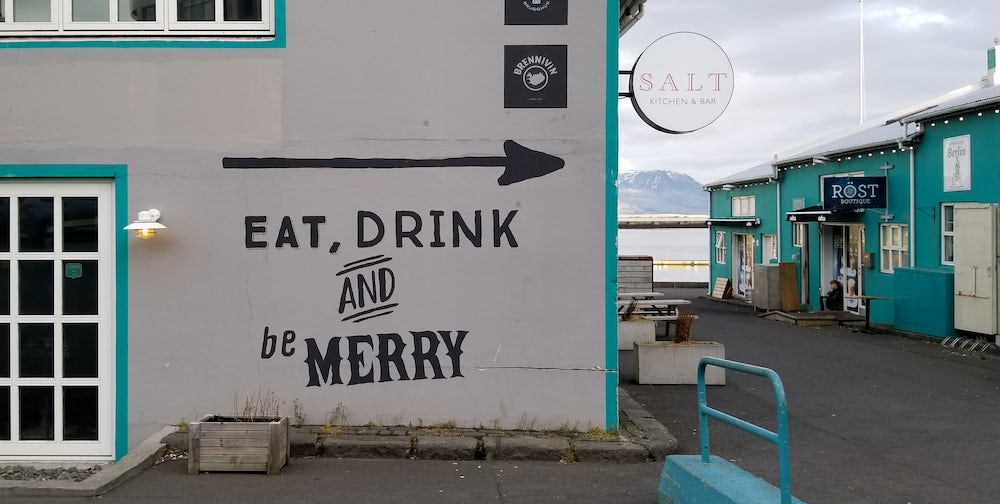 An Introduction to Icelandic Drinking Culture

Want to take part in the iconic Icelandic drinking culture, but not sure where to start? Here’s a quick guide to the alcoholic beverages you can expect to encounter during your travels.

When I first traveled to Iceland, I drank a lot of Reyka vodka. Truly, it’s lovely stuff. Since moving here, though, I’ve definitely been enjoying the rest of Iceland’s spirits. One of the best parts of traveling, after all, is immersing yourself in the great food and drinks you don’t generally experience in your own home. You may have noticed that Iceland is a bit chilly and the weather can be brutal, and in the wintertime the days are short and dark. What better way to spend a day inside than with some mates and a pint? Let’s break down your options, so you don’t get overwhelmed at the pub. 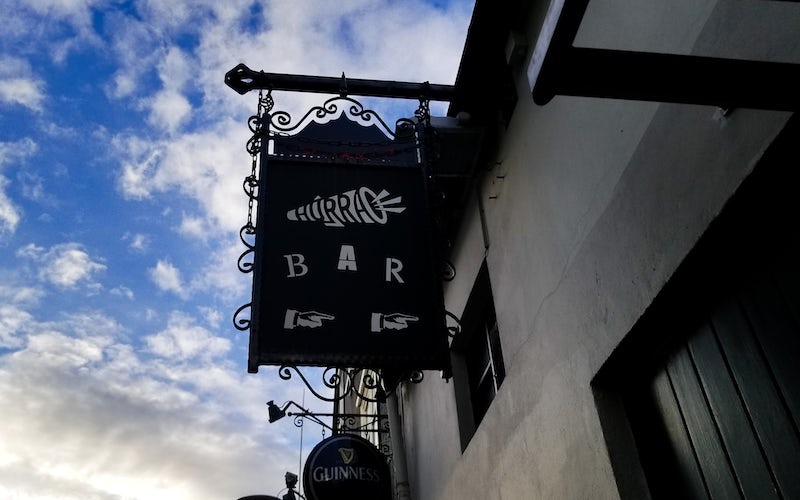 First, a bit of background – Iceland actually had a short but total prohibition on alcohol in the early 1900s. Nowadays, the drinking culture may seem a little different – in my hometown in the United States, for instance, getting drinks in the middle of the week is a constant occurrence. Here in Iceland, most of the partying happens in the weekend… in fact, you may have heard of the famous nightlife here in Iceland. 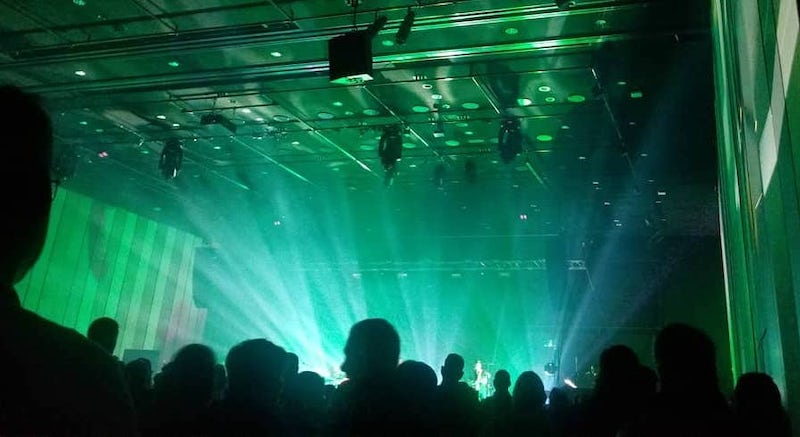 Don’t miss out on the clubs and bars while you’re here – there’s always live entertainment somewhere, be it jazz or a DJ or a comedy night, and Reykjavík is relatively small city, so many spots are within walking distance from each other. While I feel far safer here than in other cities, of course you need to drink responsibly, and definitely don’t leave your drink alone while you’re out. And, of course, never drink and drive. Also, you may find that people are drinking outside in public. It is absolutely important to make sure to not cause any trouble, be a public nuisance, or leave your trash on the ground. Also, keep in mind that bars and clubs may not want you bringing your open containers into their establishment, so always comply with the rules. Finally, the legal drinking age in Iceland is 20.

So now that that’s all mentioned, how about we get to the fun stuff? While you’re here, definitely don’t miss your chance to try these specifically Icelandic spirits. 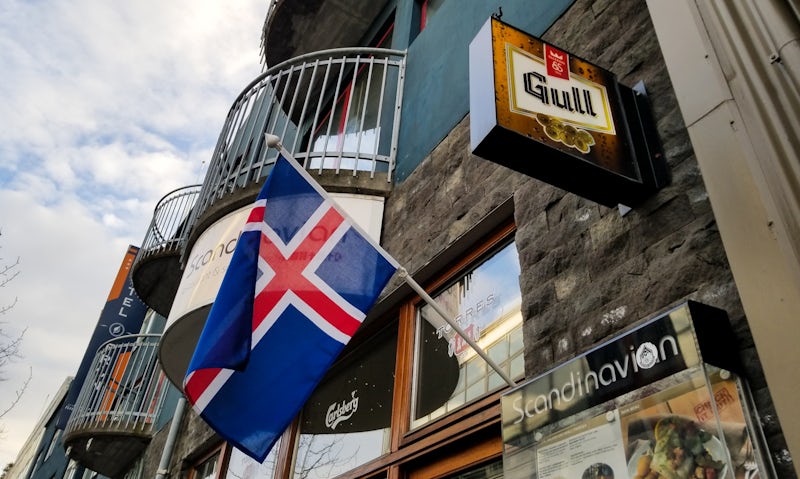 Let’s start with the most extensive type, shall we? If you’re not into beer, maybe skip ahead to the next section… this is going to be a long one. Iceland loves beer, and the brewery scene is bustling.

Though the complete prohibition only lasted a few years, beer was actually banned in Iceland until 1989! Have you heard of Beer Day? Celebrated nationally on March 1, this holiday marks the end of Prohibition. Nowadays, the country has a vibrant beer culture, full of microbreweries and craft selections. In fact, there are simply too many beers to list here – but I can offer a quick overview. Also, as a note: while you can certainly buy other beers here, why not take the opportunity to buy a specifically Icelandic brew?

The major breweries include Einstök Ölgerð. You can visit their brewer’s lounge in Akureyri and taste some of their celebrated ales, including Icelandic White Ale, Arctic Pale Ale, or their Toasted Porter lager, to name a few. They also offer seasonal brews, such as a Doppelbock, a Winter Ale, and a Berry Ale.

In the South, you can find Ölvisholt brewery near Selfoss, where you can visit a tap room and their brewery. Year round they offer Skjálfti lager, the Belgian style witbier Freyja, pale ale Sleipnir, Skaði ale, Móri red ale, and Lava stout. As you can tell, a lot of these names are quite interesting – you can check out their website for some great info on which mythological beings each drink was named for! They also offer a wide range of seasonal beers, from the IPA Forseti to the Hel winter porter, among several others. 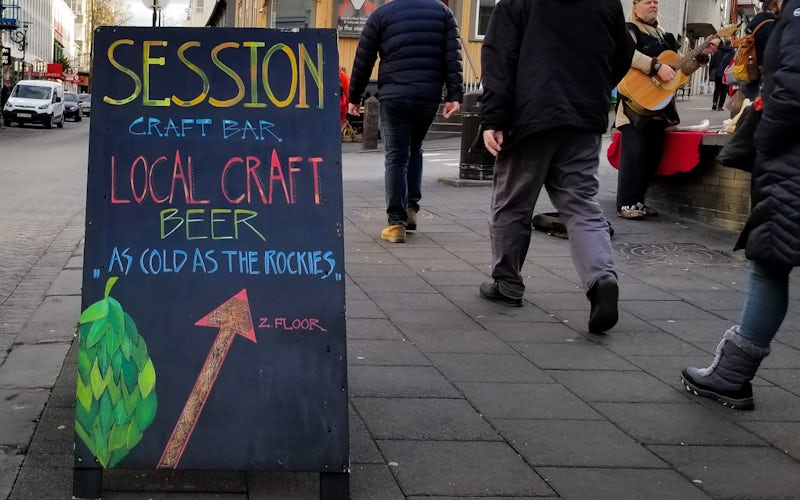 Borg Brugghús is another brewery which offers an incredibly wide range of craft brews, right here in Reykjavík. This award-winning company uses local ingredients and draws inspiration directly from Icelandic culture – you can check out their website for an overview of their options.

Heading back North, another micro brewery is Gæðingur, located on a farm in Skagafjörður. If you’re in Reykjavík, check out Microbar at Austurstræti 6 to try some of their brews, as well as other companies’, including Steðji, Ölvisholt, and Kaldi. See here for more information. 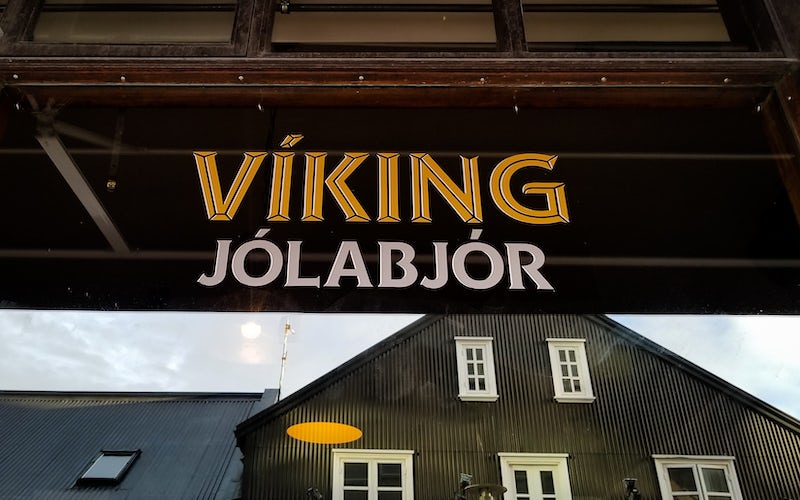 In my own experience, whenever someone has bought me a beer, the go-to has seemed to be Víking Gylltur or Víking Lager. Brewed in Akureyri, Víking is probably one of the most common beers sold here. They sell mostly lagers, though they also have a stout option as well as the occasional seasonal special. Egils Gull, another lager, is also an extremely popular choice.

Interested in seeing a brewery? You can visit Ægisgarður at Grandi, and also Bryggjan’s Beer and Brewery. Also, there are plenty of beer tours, including this walking tour, Cheers to Reykjavík, and the Reykjavík Beer Tour. Like I said, you have plenty of options! Not into a walking tour? Did you know there’s actually a beer spa? Located at Árskógasandur, Eyjafjörður in North Iceland, this is a totally unique experience… yes, you get to soak in warm beer, which is supposed to be beneficial for your health. You also get to enjoy a drink – not the tub water, of course! 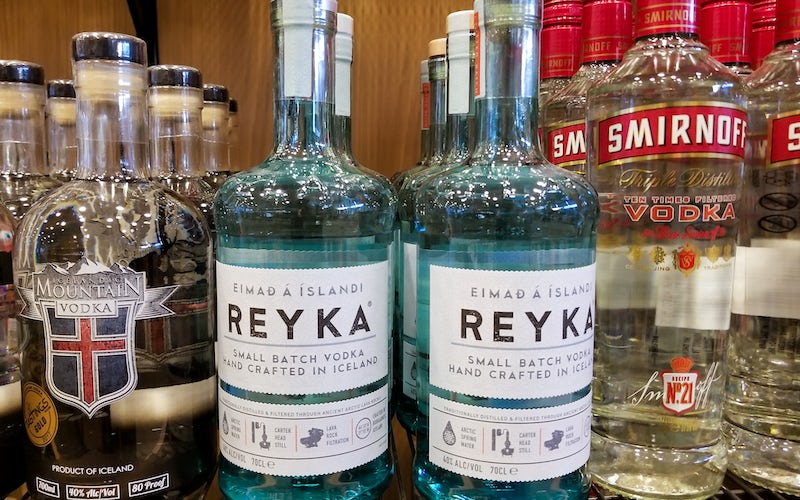 To start off this section, I’m going to highlight Reyka vodka. It is, quite honestly, the best vodka I’ve ever tasted. Easily drank straight, this crisp vodka is award winning and an environmentally friendly option, as their distillery is run completely by geothermal activity. Really, I do recommend trying this, as it is quite lovely – and that’s coming from a whisky drinker.

Now, let’s move on to your other options! 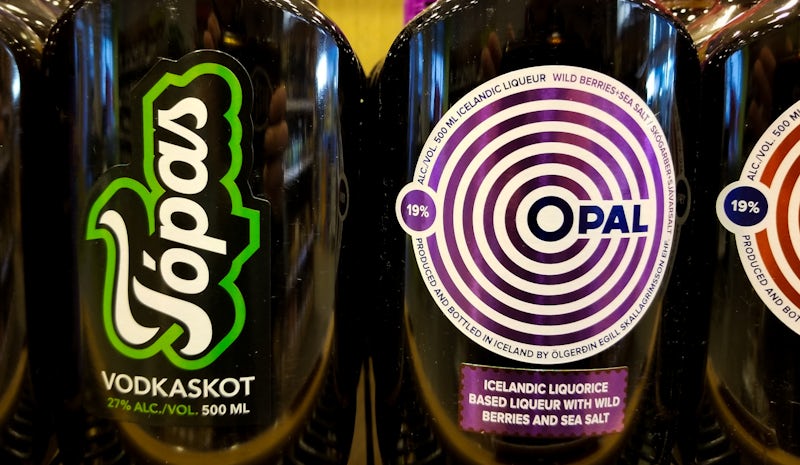 The first time someone bought me a shot in Iceland… ah… let’s just say, I was not prepared, and made a fool of myself. That shot was Ópal, and I was assured afterward that it tastes “just like candy!” not like “medicine!” which is what I was shouting.

Alright, alright, I did not grow up in an area that loves liquorice quite as much as Icelanders do. While I certainly had to acquire a taste for this (let’s be honest, this only took one night!), if you are a fan of liquorice candy then you’ll definitely enjoy these shots. Also, they have quite a warming taste, which is nice on a cold and windy night in Iceland. Another popular liquorice vodka option is Tópas, by the way! Like I said, by the end of the night I’d been converted into a fan, and I can really say that this is a distinctly Icelandic taste, so even if you’re not a liquorice fan, it’s worth a shot. Get it?

Whisky fan? Me, too. Flóki is the country’s only single malt whisky. They are family-run, founded in 2009, and use only local ingredients. You can also visit the Eimverk Distillery in Garðabær, where they also produce Brennivín and gin. Tours are made by appointment and include a tasting, all for 2.990 ISK per person. Check out this article for a more extensive look at Flóki’s whisky!

When I mentioned that I was writing about Icelandic alcohol, a good friend of mine quickly shared her woes that she couldn’t find birch liqueur where she lives abroad. This earthy alcohol – either as a liqueur or schnapps – is very popular and distinctly Icelandic. Called Björk, meaning birch, or Birkir, you can find these drinks all over the country, and it is difficult to miss – that bottle with a twig inside? Yep, that’s it. They are produced by Foss Distillery, whose wish was to bottle the experience of an Icelandic springtime evening. How poetic is that? These bottles, too, make great souvenirs for friends and family, as they’re very pretty, with little birch twigs inside.

Like björk and birkir, Fjallagrasa moss schnapps is a uniquely Icelandic beverage, created with – you guessed it, that famous Icelandic moss. Did you know there is also moss tea?

Literally translating to “burning wine,” Brennivín is definitely an iconic Icelandic spirit, referenced in pop culture worldwide and readily found in bars and liquor stores across the country. This is a schnapps that tastes a bit like anise, due to the main ingredients of caraway and cumin. Yep, more liquorice flavor! Often taken as a shot on special occasions, this is actually also a drink Icelanders take on Þorrablót, a wintertime festival. It’s also the well known companion drink to the infamous Icelandic fermented shark dish, hákarl – but you can skip the shark, of course. The bottle is pretty iconic with beautifully crisp black and white label design, and tough to miss in liquor stores or duty free shops, so grab a small bottle to try while you’re here. 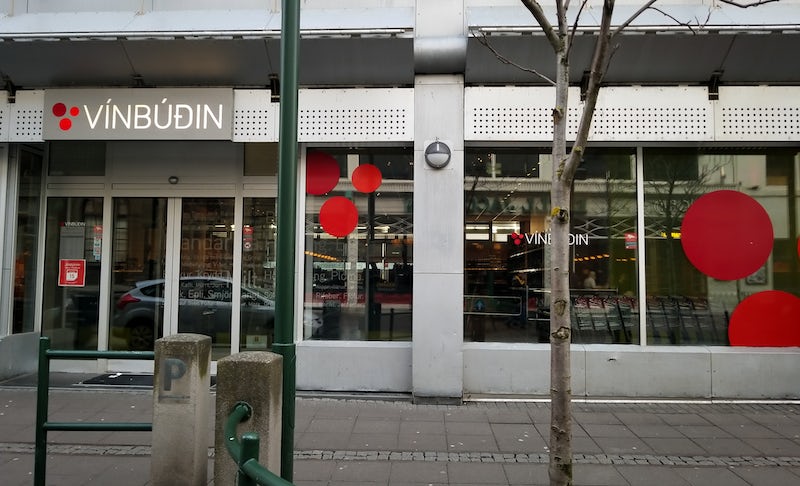 A great way to try out a bunch of these liquors without investing in a proper bottle is to visit a duty-free shop in Keflavík airport when you land here. They often sell a variety of sample-size bottles for you to pick and choose from… these also make great souvenirs. On that note, be prepared in that alcohol in Iceland is extremely expensive. Take advantage of duty free shops, perhaps, while you’re in the airport! If you’re looking for a liquor store for anything with an alcohol content over 2.25%, your only option here is Vínbúð. Sprinkled throughout the country, this is the state-owned liquor and tobacco shop. Here is a list of their locations and opening hours throughout the capital city and the countryside. As a note, they are closed completely on Sundays, so plan accordingly if you want to grab something! You can also use their website to request certain liquors be sent to your local branch via their online store, which is convenient. 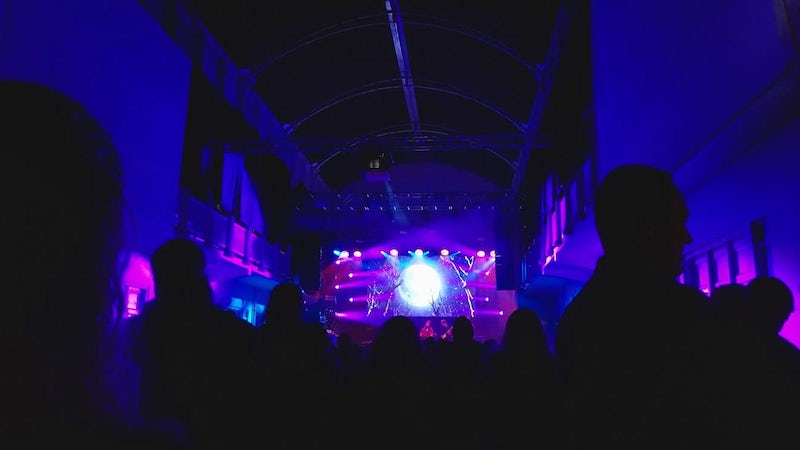 Okay, I can’t finish this article without reminding you again to drink responsibly, for the sake of yourself and others. Also, be sure to hydrate, after all this drinking and dancing! As always, don’t waste your money (and implicate the environment!) with bottled water here in Iceland – the water from the tap is pure and delicious, and free.

So there you have it – a quick glimpse at the wonderful world of Icelandic alcohol. While you’re here, be sure to give some of these a shot (or two)!

A Guide to the Reykjavik Nightlife
Story