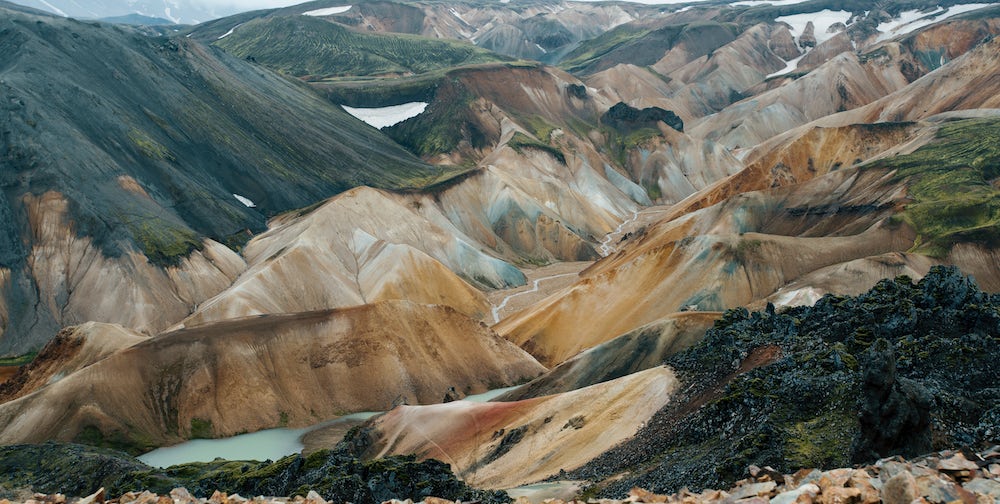 The Highlands of Iceland: A Guide for First-Timers

The Highlands of Iceland are a magical place. Here's a guide for those who are curious about this remote and unique area.

The Highlands of Iceland cover most of Iceland’s interior. This part of Iceland is not inhabited and is classified as ‘wilderness’.

The Highlands may be rough and inhabitable, but in fact some of Iceland’s most splendid sites are found in the region. Most of Iceland’s glaciers are located in the Highlands, but you can also find some gorgeous volcanoes, black deserts, glacial rivers and waterfalls, geothermal areas and hot pools in the area. There are also some amazing hiking trails in most parts of the Highland area.

The Highlands cover 40.000 square kilometres of the country, which is a pretty large part of Iceland’s total size. This means that you probably won’t be able to explore the area in its totality while you’re in Iceland. You will have to plan your time carefully and research which parts of the Highlands are the ones that appeal to you the most.

In this article, I will tell you about the most beautiful attractions in the area and I will provide you with some practical information as well. Traveling in the Highlands can be a bit of a hassle, so I advise you to prepare well and do some thorough research before you start your journey. 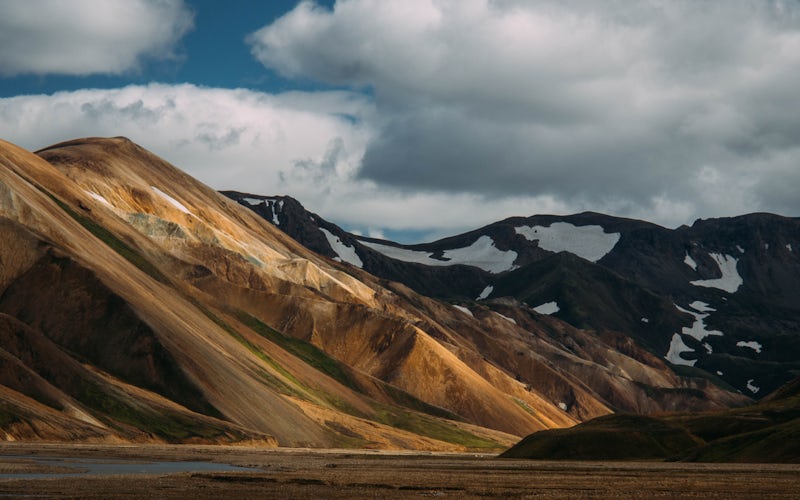 Some of Iceland's most splendid natural wonders are found in the Highlands. Unsplash/Steve Parfitt.

When is the best time of year to explore the Highlands?

Winter
During the winter, most of the Highland roads are impassable for regular cars. This means you have to drive a so-called super-jeep if you want to be able to navigate the area during the winter. In the spring, many of these roads are closed for all traffic (they are fragile while the frozen soil is slowly melting) and if you disobey, you might face penalty.

If you’re eager to go on a winter-journey to the Highlands, you can check out various guided tours to some of the most interesting spots in the area. Here are a few ideas.

Summer
The roads are usually open during the summer months but since you frequently have to cross rivers (there aren’t many bridges in this vast area), you will have to drive a proper 4x4 vehicle. This article explains the basics of driving in the Iceland Highlands.

Most people choose to visit the Highlands during the summer. It’s not just due to practical reasons; the Highlands are significantly more beautiful and picturesque during the warmer months.

Most hiking trails are impassable during the winter because of heavy snow, so summer is the only option for avid hikers. 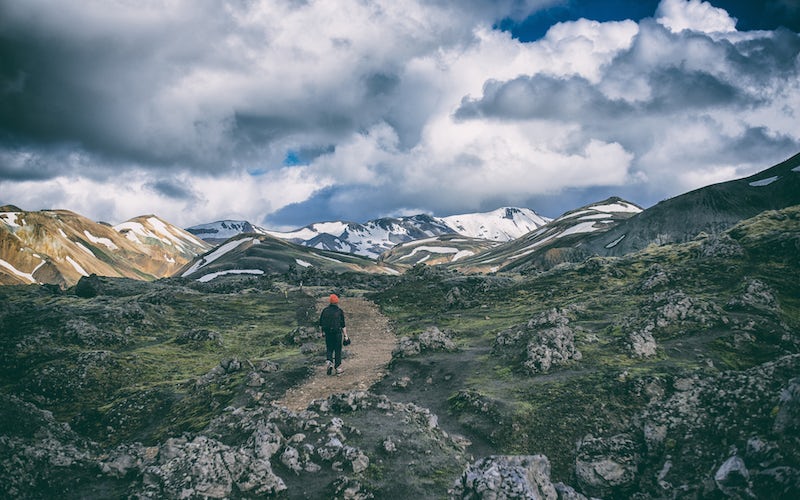 A hiker in Landmannalaugar on a summer's day. Unsplash/Jonathan Pie.

Where can I stay?

There are (almost) no hotels in the region, so don’t expect to book your accommodation through a regular booking site. If you’re not camping, you will have to stay in mountain huts which can be found throughout the area. These mountain huts are either owned by Ferðafélag Íslands or Útivist and you can book them through their websites.

A map of campsites can be found here. 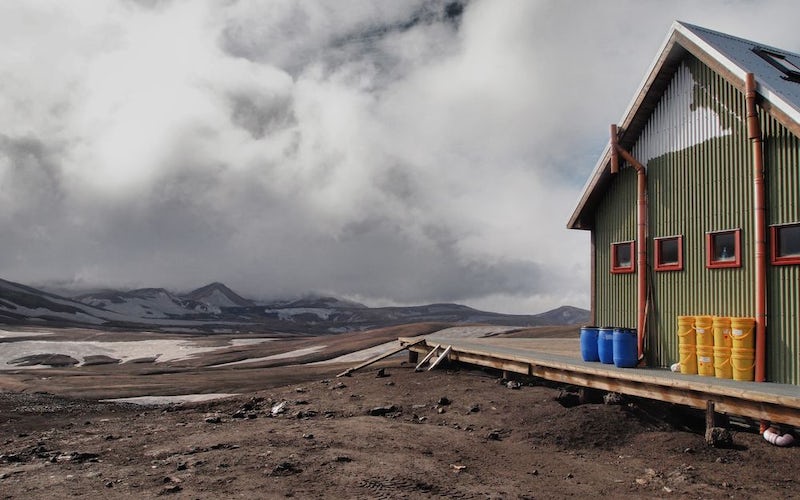 Temperatures in the Highlands are significantly lower than in the lowlands, due to the high altitude. The difference in temperature can be huge, so by all means do not assume that you’ll be experiencing the same weather conditions on your Highland-adventure as you did in Reykjavik. The best forecast in my opinion is the Norwegian meteorological institute, www.yr.no. They are usually pretty accurate.

The temperatures in the Highlands rarely go above 50 degrees F (10 degrees C). It’s usually pretty windy up there too (not always though), so you have to dress in layers and bring a hat, a scarf and some gloves with you. The temperatures may drop below zero during the night.

Some of the most magnificent natural wonders in Iceland are located in the Highlands. Make sure that you visit Landmannalaugar if you’re a hiker, Kerlingarfjöll if you love geology and Askja/Víti if dark and mysterious places spark your curiosity. 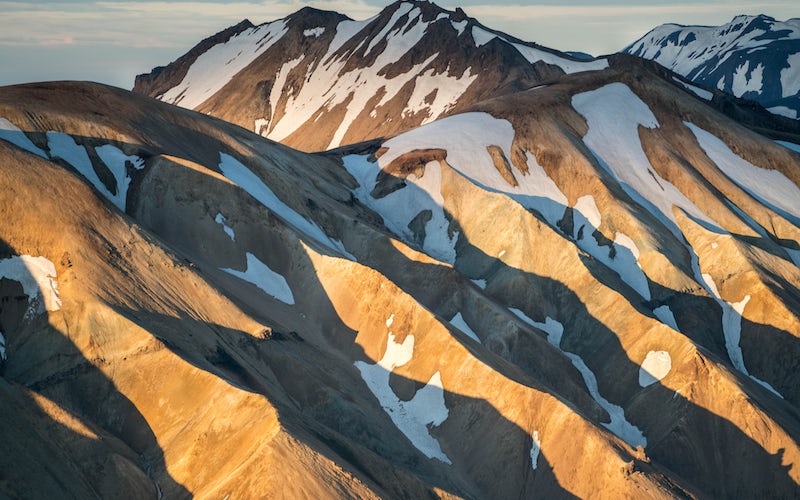 Landmannalaugar is a gorgeous place, known for its colourful scenery and geothermal activity.

Landmannalaugar is the starting point for the Laugavegur trek, the most famous multi-day hike in Iceland. Because of that, there might be quite a large number of visitors in the area.

The highlight of Landmannalaugar, apart from the breathtaking scenery, is a huge warm geothermal pool which is perfect for bathing and even swimming. There are no facilities by the pool but most people don’t bother and undress on the deck by the pool. The pool is visited by over 100,000 people each year, according to a book called Thermal Pools in Iceland.

Landmannalaugar is a perfect day tour from Reykjavik for those who want to catch a glimpse of the Central Highlands of Iceland. 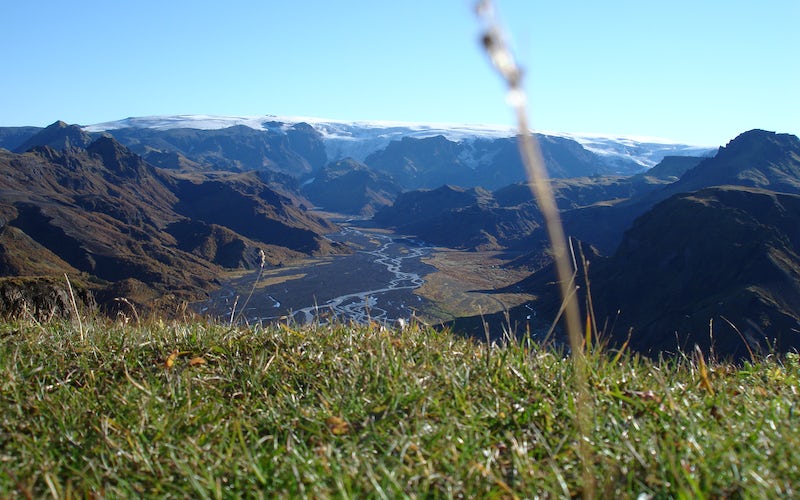 Thorsmork is a mountain ridge, located in south Iceland. The name literally translates to “Thor’s Woods”, referring to the Norse god Thor. The Thorsmork area is an extremely beautiful destination combining characteristics of the Icelandic Highlands, black sands and lush woodlands.

Thorsmork has attracted Icelandic families for years and I bet that many Icelanders have sweet childhood memories of camping with their families in the area.

Thorsmork is also a paradise for hikers. There are countless trails in the area, including the world famous Laugarvegur Highland Trek . It’s also the finishing point (or the starting point if you walk from north to south) of the Fimmvörðuháls Trek. If you are interested in hiking Fimmvörðuháls Trek as a one-day trek, here's a helpful article . 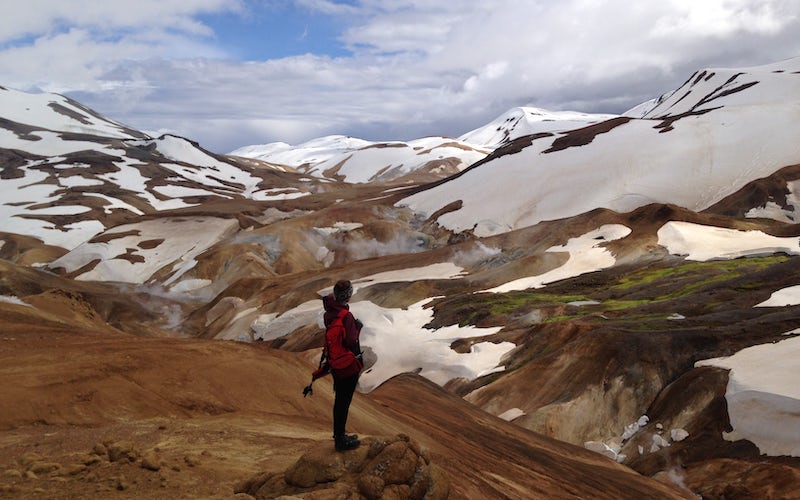 Look at these colours! Wonderguide/Nína.

Kerlingarfjöll is a rhyolite caldera complex in the Highlands of Iceland, not far from the Kjölur Highland Route. Since it’s a geologic hotspot, the area is surrounded by active volcanoes and natural geothermal pools.

Besides the geothermal activity, Kerlingarfjöll’s most distinct characteristic is its colorfulness. The reddish surface of Kerlingarfjöll stems from volcanic minerals.

There are numerous hiking trails in the Kerlingarfjöll area, some of them are even marked. The longest one, The Circle Route, is a 47 km (30 miles) long trail that takes you around Kerlingarfjöll. There are huts on the way so you won’t have to camp along the way unless you want to. Other hikes are shorter and doable in just one day.

Kerlingarfjöll used to be a ski resort but the ski lift has been closed down. The facilities still remain and it’s possible to book accommodation there. There’s a restaurant in the area, cooking facilities and a camp site. 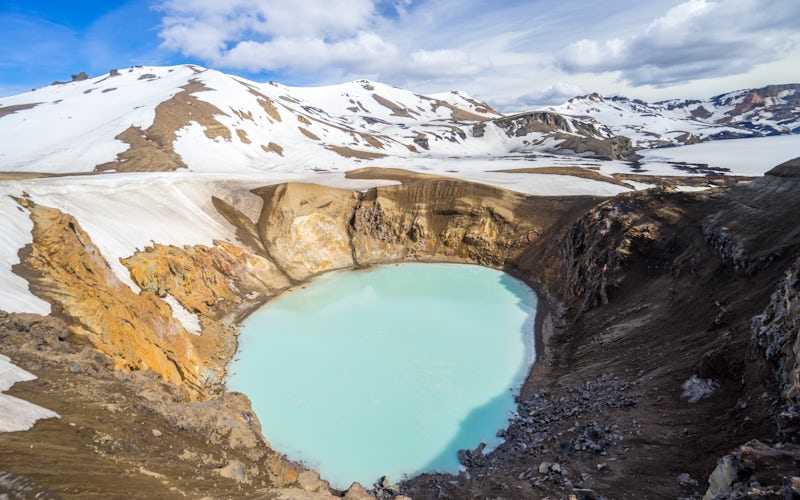 Askja is a series of calderas, remotely situated in the Highland area north of Vatnajökull Glacier. The calderas are a part of a larger volcanic complex called Dyngjufjöll Mountains.

The most notable feature of Askja is the deep blue lake in the middle of the caldera. The lake, called Öskjuvatn, is Iceland’s deepest lake. The Öskjuvatn Lake was formed in Askja’s most recent volcanic eruption in 1875.

One of Askja’s calderas, Víti, is an explosion crater filled with sulphuric geothermal water. Despite being hazardously hot in some places, the Víti pool is popular amongst natural bathing enthusiasts.

Askja, and the surrounding Dyngjufell mountains, is without a doubt one of Iceland’s most awe-inspiring (some might even say “scariest”) places in Iceland.

In the year 1907, two German geologists, disappeared without a trace after having spent some days researching in the area. They were supposedly sailing on the Öskjuvatn Lake when they disappeared, but their bodies were never recovered.

The fiancée of one of the researchers, Ina von Grumbkow, decided to head to Askja to search for her sweetheart, and she wrote the following words in a guest book near the lake:

“Only a few mortal beings are as fortunate, as these two, to dwell in such a magnificent grave as this majestic and bright lake is. Only kings require eternal residence in their grave, where they are laid in earth. Do the kings enjoy greater peace where they dwell in the burial sites at El Escorial or the tombs of the pyramids? Here, genuine peace is omnipresent, in bright summer days and dark winter moments – age after age.”

After her this graceful good-bye, von Grumbkow returned back home after an unsuccessful search for the two researchers.

The area is very remote and not very easily accessible. If you have a 4x4 vehicle, it's very interesting to drive around the area. There are also some hiking trails near Askja, for the most adventurous travelers. 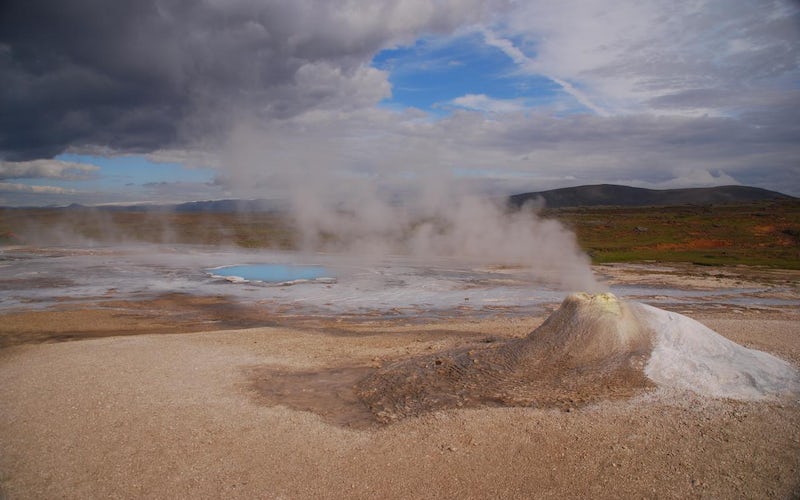 Hveravellir is a gorgeous geothermal area in the Highlands. Magnificent colours, hot springs and a geothermal hot pool is what attracts most visitors to Hveravellir. A significant number of those who visit the area are hikers that are hiking the Kjalvegur hinn forni trail, that starts in Hveravellir and finishes at Hvítárvatn.

There's a camping ground and several huts in the area, so accommodation should not be a problem if you want to spend some days in Hveravellir. If you're driving the Kjölur route, Hveravellir is also a good pit stop. If you need more info about this Highland-gem, check out Hveravellir.is. 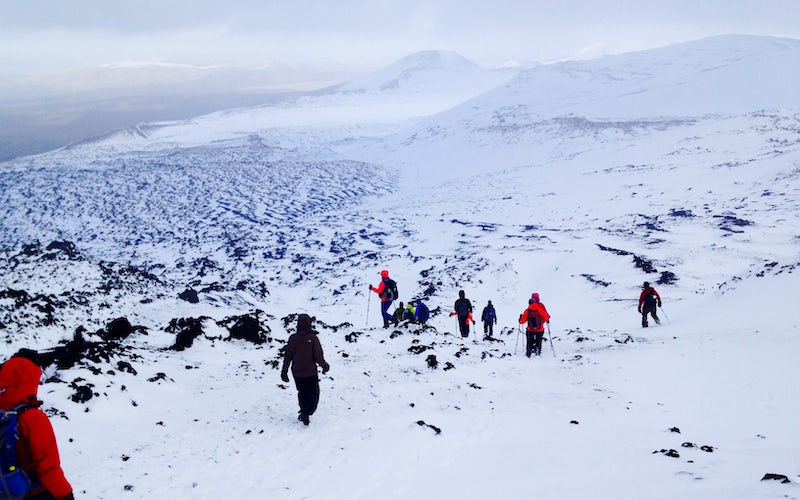 Mt. Hekla is one of Iceland’s most mysterious volcanoes and also one of the most active ones. The last time Hekla erupted was in 2000 and since she usually erupts in every fifteen years or so, we’re currently waiting for her to burst.

Hekla is a volcano often associated with myths, superstition and magic. This 1419 m (4,892 ft) tall stratovolcano has inspired artists and writers for decades and during the Middle Ages, Europeans believed that the "Gateway to Hell” was to be found on the summit of Hekla. It was also believed that witches gathered together on the snowy hills of Hekla and the black ravens that flew over the mountain tops were thought to be devils in disguise.

In 1750, the first men reached the summit of Mt. Hekla. These courageous hikers were two scientists, Bjarni Pálsson og Eggert Ólafsson, and their aim was to disprove the world famous theories about the entrance of Hell being on top of the mountain. Needless to say, they did not find the “Gateway to Hell”.

Hekla is definitely not amongst the most popular mountains to hike in Iceland. The weather conditions are usually harsh near the summit and the road to the foot of Mt. Hekla is rough and not suitable for all cars. Hekla’s volcanic activity may also be discouraging for some hikers.

If you’re looking for an amazing multi-day hike in Iceland, you should definitely check out the hiking trails in the Highlands. It goes without saying that the Laugavegur hike should be on every hiker’s bucket-list, but there are several other hikes in the Highlands that are also worth checking out:

How to Drive in the Icelandic Highlands
Story