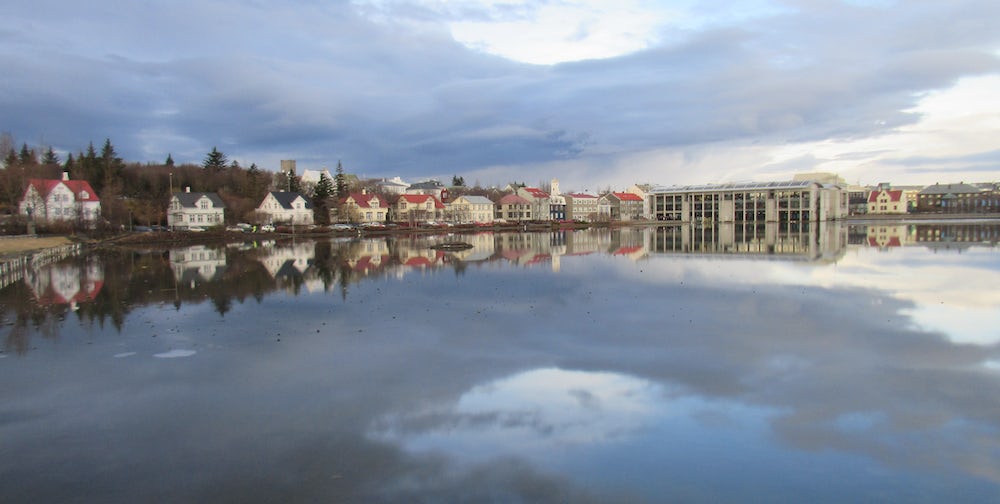 The stunning and the strange combine in the buildings of Iceland's capital. A walk around the downtown area shows off some unusual designs and hidden gems of Reykjavik's architecture.

A city’s character is bound up in its architecture. Whether it’s Oxford’s ‘city of dreaming spires’ or the ‘concrete jungle’ of New York, the first impression comes from its buildings. In Reykjavík, this often means corrugated metal, concrete, and the ever-present Hallgrímskirkja.

Reykjavík’s architecture, especially its building materials, can be spectacularly hit or miss. Grey concrete-block houses form a sharp contrast to the grandeur of Harpa, Hallgrímskirkja, and Perlan. Between these extremes, however, are the buildings that embody Reykjavík’s character: taking in trends and influences, and responding to them with the materials at hand. These buildings are alternately historic, modern, and quirky — and all show the creative powers of designers through the years.

Strolling through neighbourhoods can give you a sense of architectural styles, but it’s usually more fun to learn about the buildings that you can enter for yourself. Most of those listed below are accessible to the public, and with one exception, located in or near the downtown area.

To speak in favour of concrete is a guaranteed way of raising a sceptical eyebrow, but several buildings around the city manage to use the material in a way that is surprisingly graceful. The café and music venue Hannesarholt, at Grundarstígur 10, is an example of concrete made beautiful. Built near the turn of the 20th century for Hannes Hafstein, First Minister of Iceland, its light-grey walls and curving roof retain a nostalgic elegance. 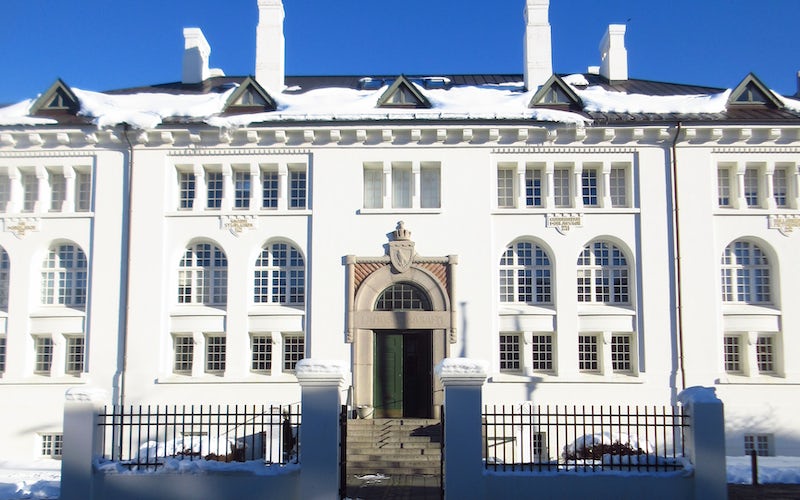 The Culture House, pictured above, is of a similar time. The whitewashing of concrete appears to have been in vogue at this point, perhaps due to the striking effect it has in the sun. Bistro Sólon, on Bankastræti, adds an artful touch, with upper-storey roses carved along the roofline, blooming gold on a clear day. The 1905 tower-topped Gimli, on Fríkirkjuvegur, catches both the morning light, and the curious eye. The current headquarters of the Reykjavik Arts Festival, it overlooks a large-scale outdoor chessboard, as well, built at the same period. The chessboard is open to the public; the building is not. 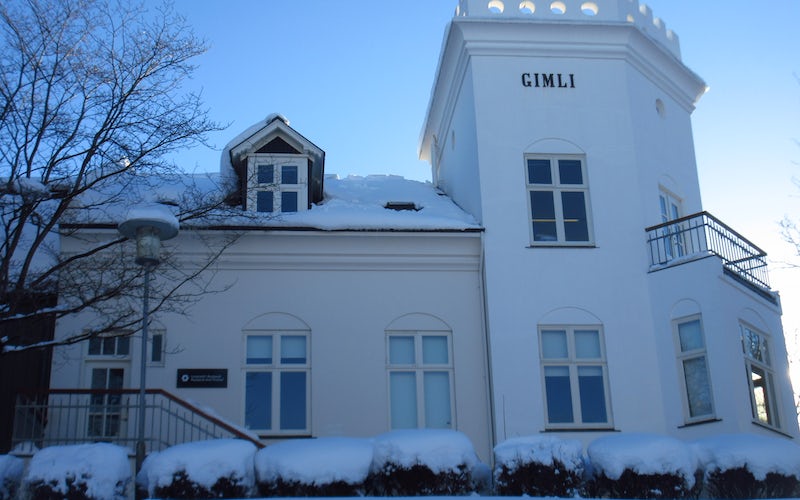 The Nordic House, on the other hand, is Scandinavia at its most modern. Situated on the University of Iceland campus, its restaurant on the lower level looks over a small pond, the deep-blue walls atop it jutting upwards. The Finnish architect Alvar Aalto designed the Nordic House to echo the shape of the nearby mountain range, using glossy ceramic tiles. Along with the restaurant and library, it hosts regular cultural events in all of the Nordic languages. It too takes the sun into account — the windows allow for good light throughout the main floor. 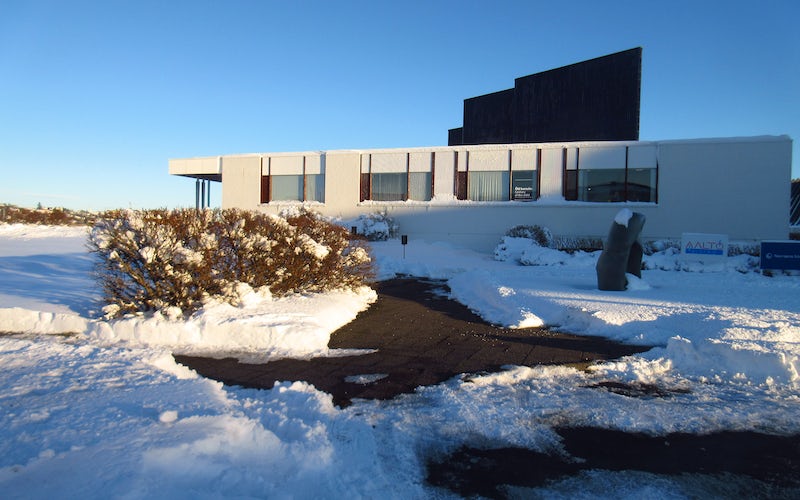 A slightly longer walk along the northern shore will lead you to Seltjarnarnes, the municipality just west of Reykjavík proper. It’s impossible to miss the rooftop folds of Seltjarnarneskirkja, designed by Hörður Björnsson in 1989. It appears almost to be made of origami, and the paper-white roof gleams under the sun. 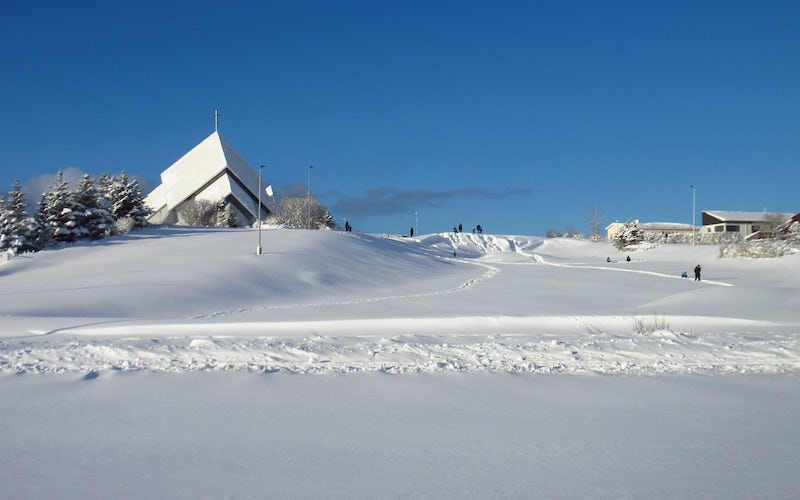 The best advice for architecture-seekers in any city is to look up — because sometimes, when you look at a building, it looks back. At the corner of Posthússtræti and Austurstræti, glancing towards the rooftop of the Café Paris (now undergoing renovations) allows for a sight worth seeing.

On the highest storey, carved into the white-grey wall, a façade showing what appears to be a scene of transportation looms over the street. Two men stand in the centre, one holding a paper and the other a spear, while pack horses carry their burdens. 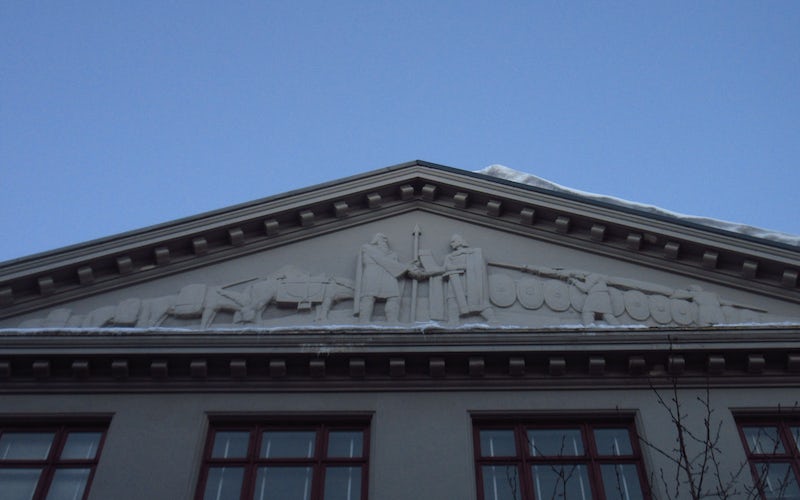 Right across the street, on the same corner, a face scowls forth grotesquely from the archway above the bar and restaurant Apótek. It’s not menacing, but nor is it friendly; the way it leans on one outstretched hand is even comical. The tower and weather vane rising over it gives the impression of whimsy, perhaps an architect’s sense of humour. 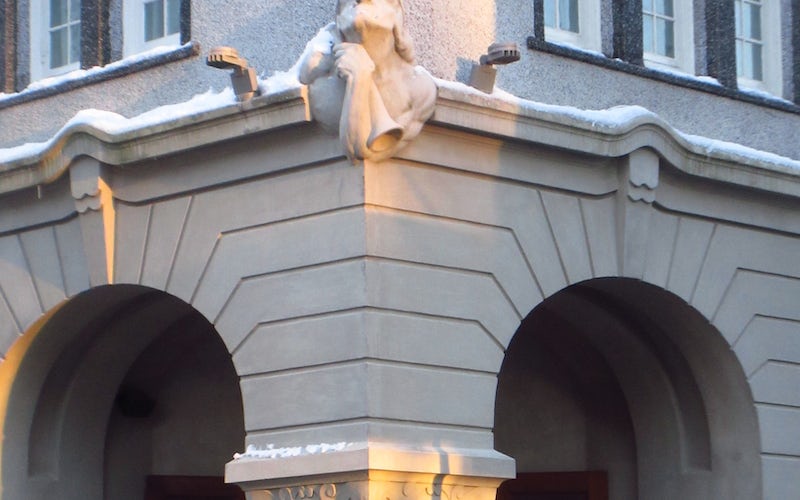 Nearby, the square Ingólfstorg closes off the western end of Austurstræti. It is surrounded by souvenir shops, restaurants, and hotels, but it would be a mistake not to look up before stepping inside. One of the more elaborate examples of Reykjavík rooftop sculpture lives atop the red building at the north side. Four large birds of prey stand symmetrical guard, while in the middle of the roof a Viking ship displays its colourful shields. 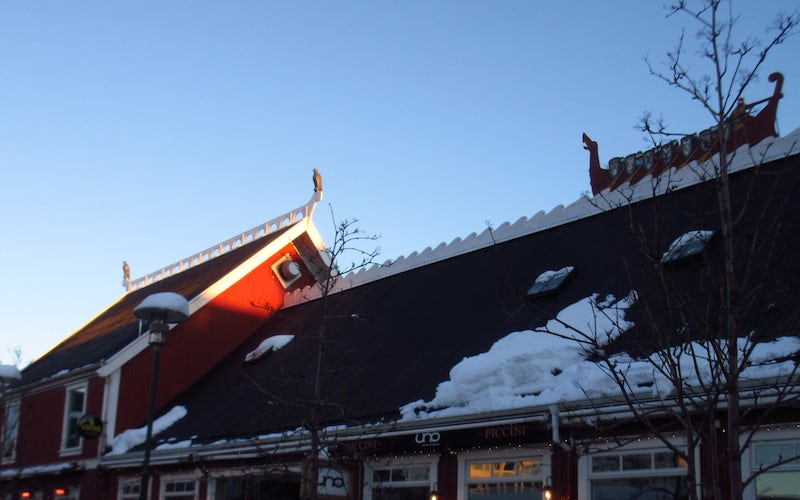 A typical feature, throughout Reykjavík’s history, seems to be the small upper-storey balcony. Aside from doubtless being a handy place to take a breath of fresh air, this is also highly decorative, often painted in a complementary colour, and either emphasizing or derailing the symmetry of the whole.

Many buildings along Laugavegur, the main shopping street, and near the pond, also show off small towers or gables. Keep your eyes up — it’s the best way to see the interesting parts of buildings. 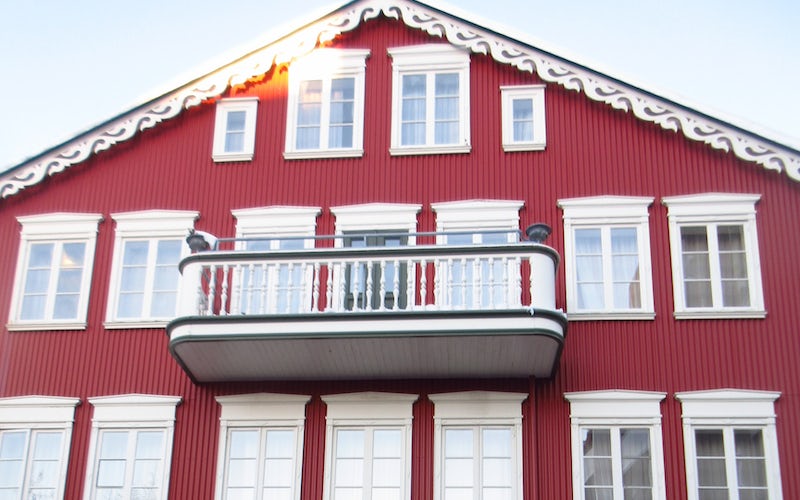 Finally, some of Reykjavík’s best sights are those that serve a unique function, or tell an unexpected fragment of its history. Part public art, part architecture, they bring out some of the city’s unique character. The three mentioned here can be easily found downtown.

Starting from Ingólfstorg, turn left on Aðalstræti. Underneath the awnings of a parfumerie and a café, the sidewalk is interrupted by the raised platform and pump that are all that remains of an old well. This is Ingólfsbrunnur, formerly one of the main watering holes of the city. It was also one of the greatest sources for news — the boys sent to fetch water each day would exchange sundry gossip and goings-on as they worked. 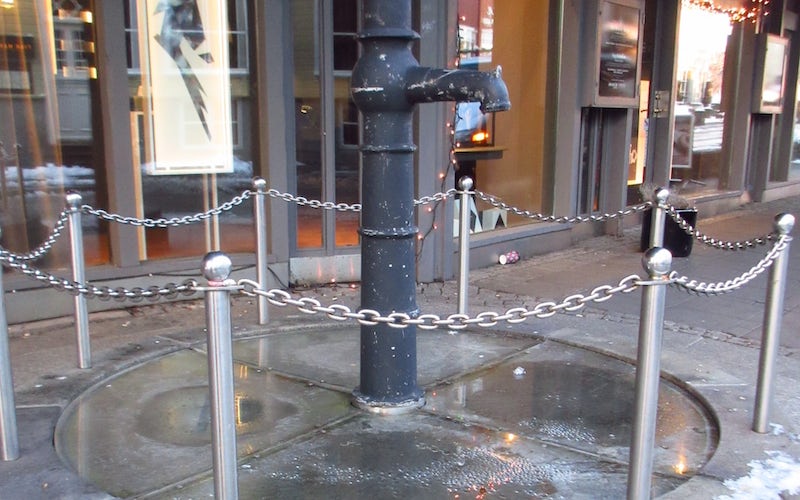 Today the gossipy clamour of waterfowl at the pond, Tjörnin, is probably the nearest equivalent. Walking past Ingólfsbrunnur, continue along the road and you will shortly see the water, surrounded on all sides by walking paths.

Among the statues of famous Icelanders and mythical creatures that line these trails, near the bridge that divides the pond in two, stands a diminutive white-washed tower, topped with a terrace. This is Hljómskálinn, the pavilion built in 1923 at once as a centrepiece to Reykjavík’s first public park, and as a music venue. It was thought that musicians could play on the roof when the weather allowed, and the Reykjavík Brass Band still use the building, sending their notes out over the honking of geese. If the pavilion looks as though it grew there naturally, that is because it might as well have — it was built around the same time that the trees nearby were planted. 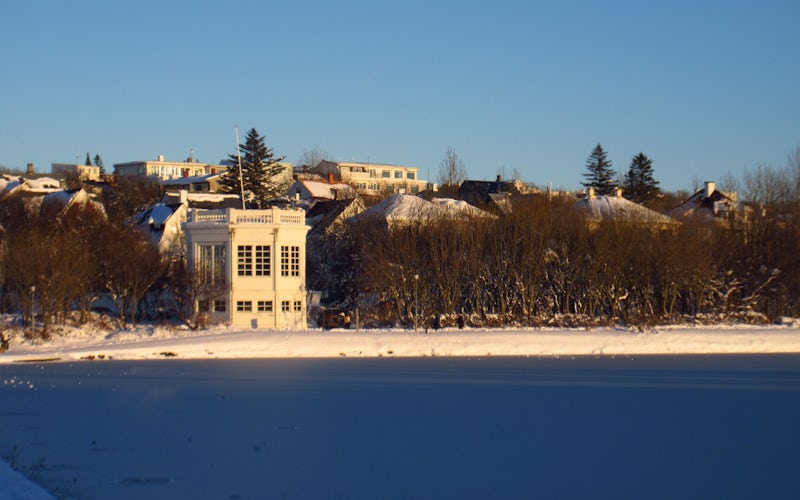 On the opposite side of the pond, the windows of Ráðhúsið (City Hall) gleam over the water. An unmissable building itself, it possesses a particularly unusual feature: namely, a living wall on the northern side. Covered over mainly in native mosses that can survive cold and wet conditions, it gives an otherwise concrete and glass construction a more organic and colourful appearance. Built by Icelandic architects Studio Granda, it’s now in its 30th year, and still green.

The main building materials are still corrugated metal and concrete, the main style of house still a fairly ordinary shape. But a closer look at some of the architectural treasures and oddities of Reykjavík reveals a rich history, some impressive innovation, and a few rather unique minds.

As you explore Iceland’s capital for the first time, keep an eye out for these quirks, take a detour to the Nordic House or Seltjarnarneskirkja, and remember to look up!