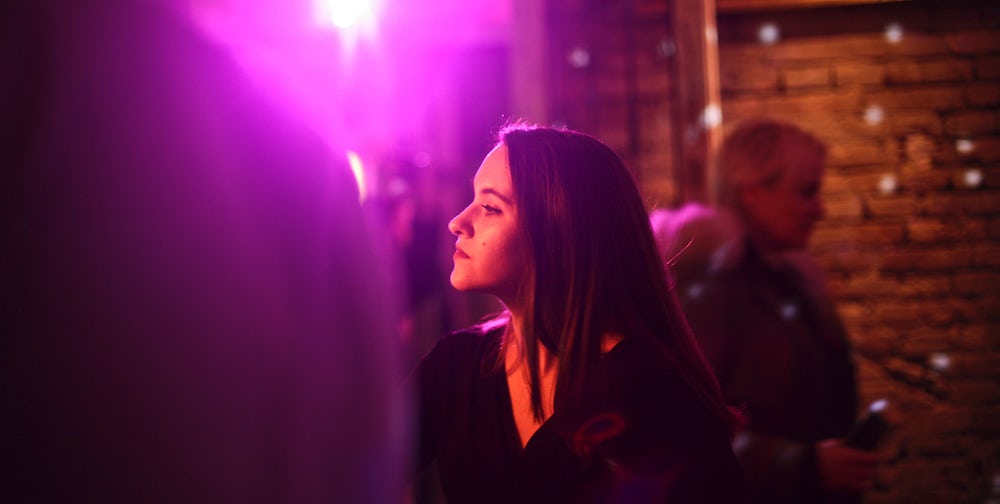 A Guide to the Reykjavik Nightlife

Reykjavik, the capital of Iceland, has a surprisingly vivacious nightlife scene. Here's what you need to know in order to find the bars and clubs that most appeal to you and some good advice for the unacquainted.

Frequently, travelers from abroad ask me about the best bars and clubs in Reykjavik. I always have a hard time answering that question since everybody’s taste is different. Hence, in this article I will feature diverse bars that appeal to different types of people. I will also talk a little bit about the nightlife “culture”  in Reykjavik and discuss the most important DOs and DON’Ts when it comes to the party scene of the capital.

I will focus on late night partying and not talk a lot about happy hours. I will save that topic for later.

Top bars to start your evening 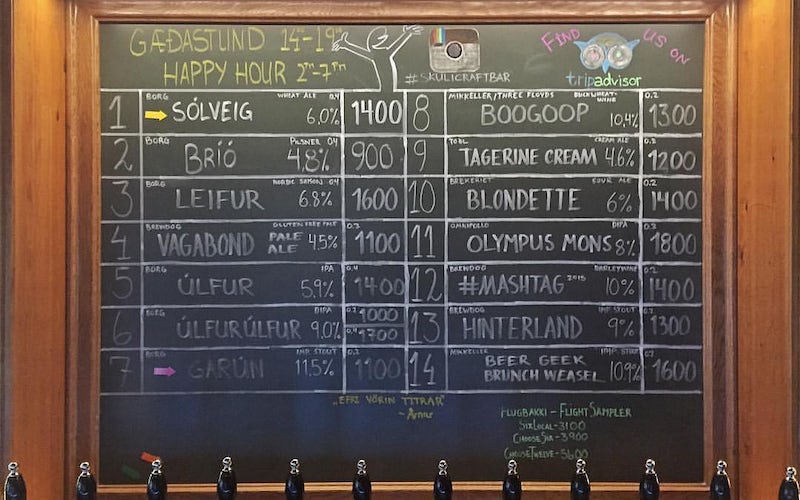 Skúli Craft Bar is a fairly recent addition to the craft beer scene in Reykjavik. Although Skúli is a pretty small place, the selection of locally brewed beers is very large. Skúli Craft Bar is located by a little square where you can find one of my favourite food trucks in Reykjavik: The Bao Bun Truck. The Bao Bun Truck is run by the owners of Skúli, so you are actually allowed to buy a couple of bao buns and snack on them inside the bar. 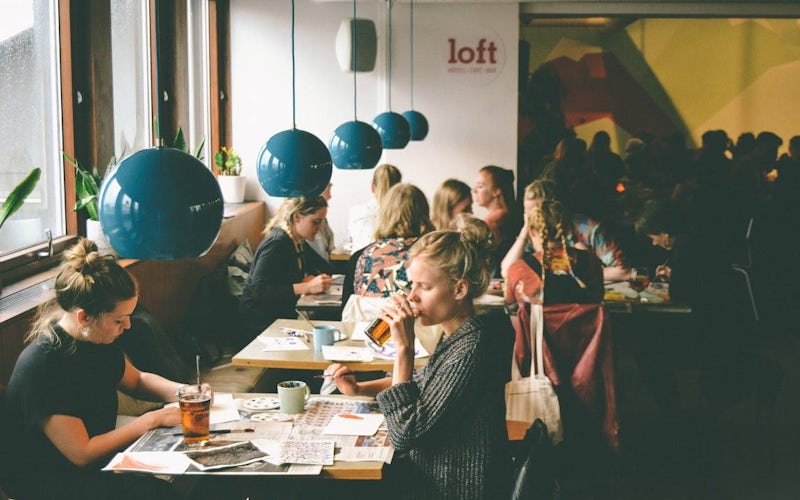 There are various events that take place at Loft. This pic was taken at a water coulouring night. Photo: Loft@Facebook.

The bar at Loft Hostel is one of these spots that are always lively and fun, especially early in the evening. Although Loft is a hostel-bar, the crowd is a mix of tourists and locals. Events are commonplace at Loft Hostel and they are usually free. The balcony is perfect for smokers and those who prefer drinking and socializing outdoors and there’s a fußball-table for those who like playing games better than talking or dancing. Check out the Loft Facebook-page to see upcoming events. 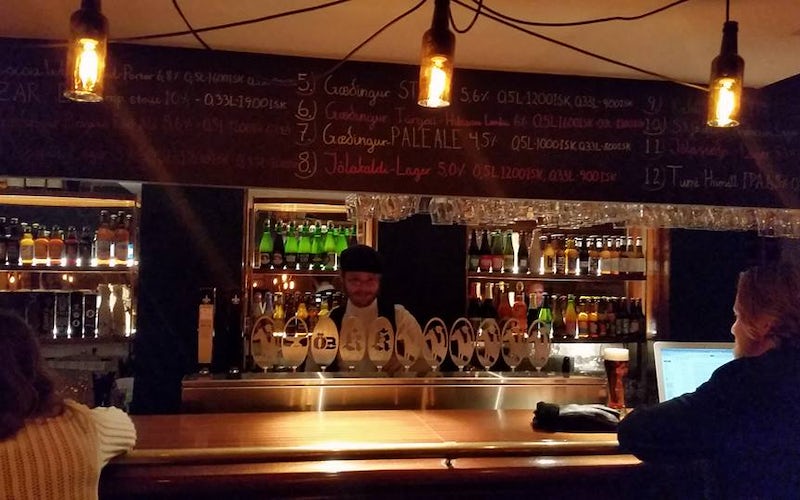 Micro Bar is a craft beer located in a basement just two steps away from the Ingólfstorg Square. It has a pretty decent selection of craft beer, knowledgeable bartenders and board games that you can grab. At Micro Bar, the focus is on good bear instead of nice decor, so If you’re looking for fancy interior and stylish atmosphere, you should perhaps opt for a different place. 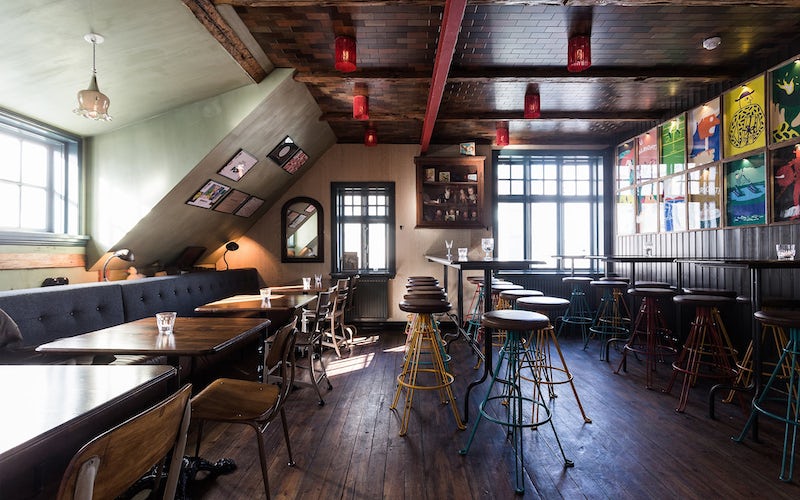 This hidden gem is probably my favourite place to sample craft beers in Reykjavik. Mikkeller is a Danish micro brewer, known for a creative approach to brewing beer. Mikkeller & Friends has a huge selection of super interesting beers on tap, so I recommend that you order a few small beers to be able to try out different flavors. The beers are not cheap, but an interesting beer-tasting experience is guaranteed.

Address: Hverfisgata 12 (on the top floor) 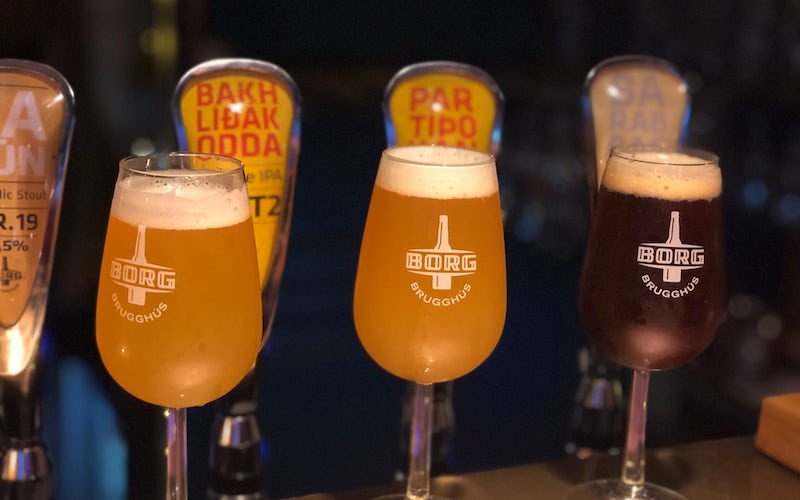 Kaldi Bar is a charming little bar that is extremely popular with locals. The beer is good and the place is usually very crowded. It’s often difficult to get a table, but if you manage to do so, I would definitely stick around for a few drinks. My favourite beer they offer is the Norðan-Kaldi, which is a malty dark-amber ale. The regular Kaldi is also pretty good. 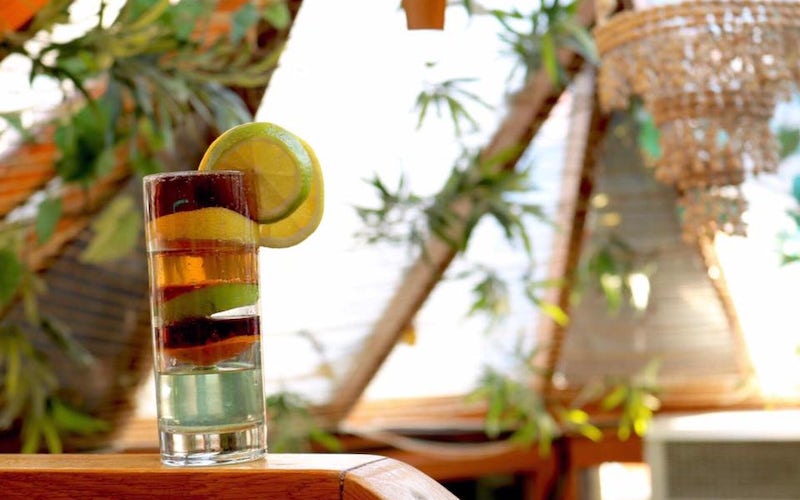 The tropical vibe of Bar Ananas attracts both tourists and locals that fancy fruity cocktails with umbrellas in them. There’s absolutely nothing tropical about Reykjavik, so it’s pretty refreshing to step into Bar Ananas and pretend that you’re in the Bahamas.

Top bars to spend the rest of the night 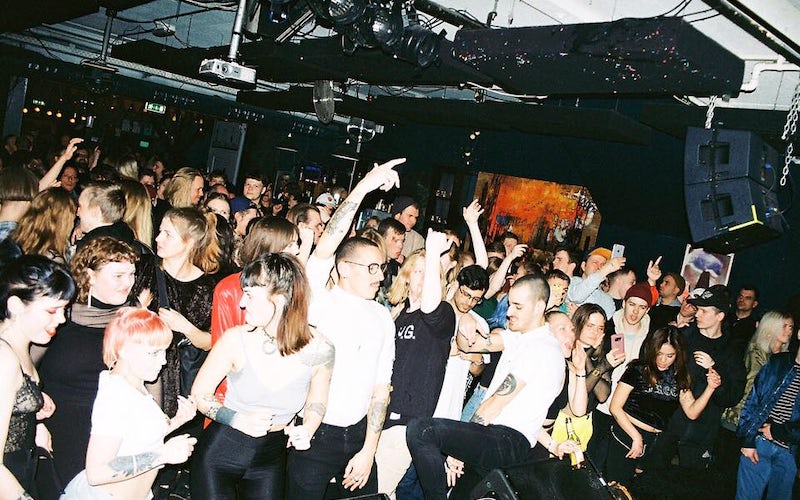 Húrra is a good pick if you want to party with a crowd of hip Icelandic youngsters. Although Húrra is definitely one of the coolest bars in town, the atmosphere is friendly and inviting. Show up late in the evening, dance your butt off and leave early in the morning after.

Opening hours: Closes at 6 am on weekends. 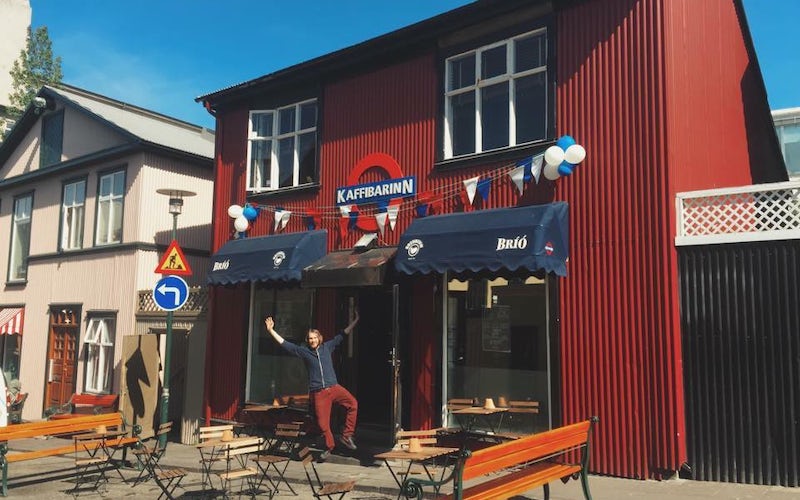 In Reykjavik, bars come and go. It is very likely that the favourite bar from your last trip to Reykjavik is simply gone when you return a couple of years later. Kaffibarinn, however, has succeeded to stay in business since the early 90s. It has never gone out of fashion during its lifetime and I think it’s safe to say that Kaffibarinn is the most iconic bar in Reykjavik. For a long time, Kaffibarinn was owned by Iceland’s most famous movie director and during that period, Damon Albarn was a regular at the bar.

If I were to recommend one place that epitomizes the Reykjavik nightlife, it would be Kaffibarinn. Arrive shortly after midnight and leave after closing time, around 6 am.

Opening hours: Closes at 6 am on weekends. 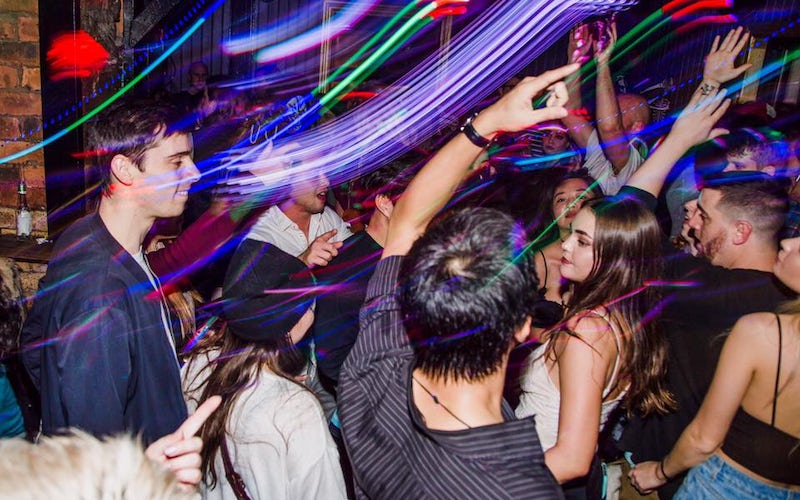 Kíkí is a straight-friendly queer bar, located on the corner of Laugavegur and Klapparstígur. The crowd is a mix of young locals and tourists, the music makes you wanna dance and the drinks are pretty cheap. You should definitely check out Kíkí if you just want to have a fun time.

B5 is where snooty university students go to have fancy drinks and dance to pop hits. Although they claim that they are just going there to have a good time, their ultimate goal is really to find somebody as snobbish as themselves to go home with and eventually have children with.

If you’re looking for a glamourous night out, opt for B5. Just make sure you change into something nice before you go because you will look like an idiot if you wear your Gore-tex pants and hiking boots. 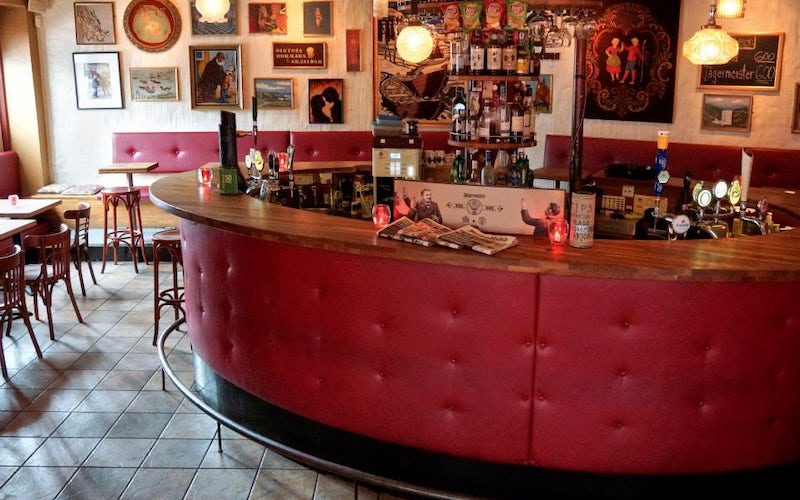 The interior of Ölstofa Kormáks og Skjaldar is far from being stylish. But who cares? Photo: Olstofan@Facebook.

Ölstofa Kormáks og Skjaldar is a laid back tavern, mostly attracting Icelanders in their forties. If you’re more into having fun conversations than dancing, Ölstofan is a pretty safe bet. You’ll probably meet all kinds of interesting people there that are eager to have a chat over beer.

Bars you should avoid altogether

Usually, there is a troubadour performing at this Danish-inspired tavern. I just think that is super annoying, so I cannot recommend this place unless you like mediocre musicians performing songs that are a total cliché.

Boston used to be a trendy bar attracting a stylish crowd. Now, it’s incredibly shabby and full of sleazy people. The last time I went there, I had the worst red wine I’ve ever tasted, served in a dirty glass. The toilets are messy and and the drinks are crap. Just don’t go there.

Putting Lebowski Bar on the blacklist may spark some controversy since it is actually very popular among tourists. If you like to go to touristy places, then that’s fine. If not, you should definitely go someplace else.

At what time does the “party” start?
Traditionally, the nightlife starts extremely late in Iceland. People really don’t start partying until after midnight. I think this is due to fact that having drinks at the bar is very expensive, which encourages people to have drinks at home with friends before hitting the town. However, it has become more common in the recent years to have a drink early in the evening and even call it a night before midnight.

How should I dress?
That depends on where you’re going. It’s definitely considered normal to go to bars casually dressed, but I would avoid wearing outdoorsy or sporty outfits. Leave the fleece sweater and rainproof outerwear at your hotel. You will feel silly wearing that kind of clothes at a bar in Reykjavik.

Let’s say I wanted to hit on local boys or girls. What do I do?
Well, I don’t really have the answer to that. Just don’t try too hard. Be friendly and interesting and don’t drop any pickup lines. Although I can’t speak for all Icelandic women, I would say that you should try any kind of chivalry since you don’t really see that a lot in Icelandic culture. Gender equality has come a long way in Iceland, which means that if you’re a guy hitting on a girl, you should just try to treat her as an equal. And if you’re a woman, don’t be afraid to hit on guys – there’s no stigma around women hitting on men.

What if my hotel is located far from the city center. Is there any other transport than taxis?
Yes, there are some night buses running during the weekends. Check the routes out here.

The Best Street Food in Reykjavik: A Local’s Guide
Story