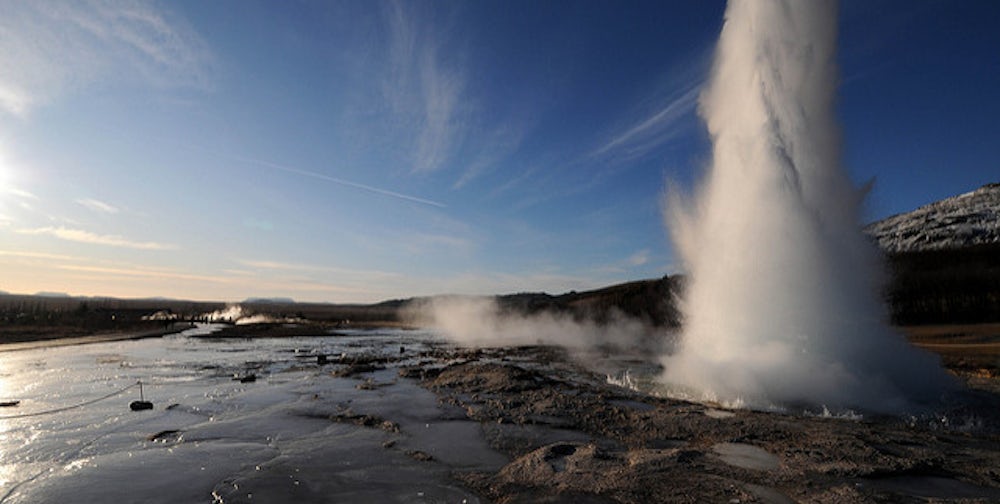 The Golden Circle: 4 Ideal Stops on the Way

If you haven't heard about the Golden Circle day tour in south Iceland yet, you'll hear about it soon! Here's a little article for those who intend to drive the Golden Circle route themselves want to make interesting stops on the way.

The inlands in the southwestern part of Iceland are characterized by green fields, farms and summer houses. The region is famous for being an ideal agricultural land and since it’s just a short distance from Reykjavik it is a popular destination for the city’s inhabitants to escape the urban lifestyle.

This is area is also home to the Golden Circle , which is a popular tourist excursion, commonly presented as a day tour out of Reykjavik. The Golden Circle is basically a trip between three of Iceland's most stunning attractions: Gullfoss Waterfall , Geysir and Thingvellir National Park . 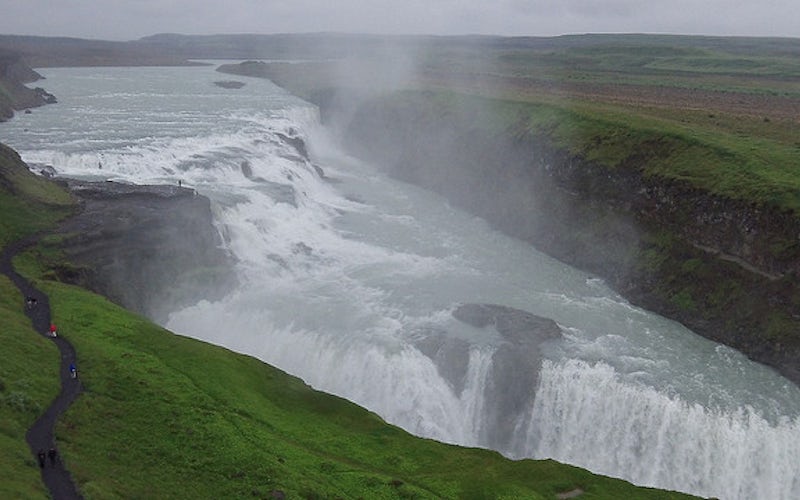 Gullfoss Waterfall in the summertime. Photo/Flickr. 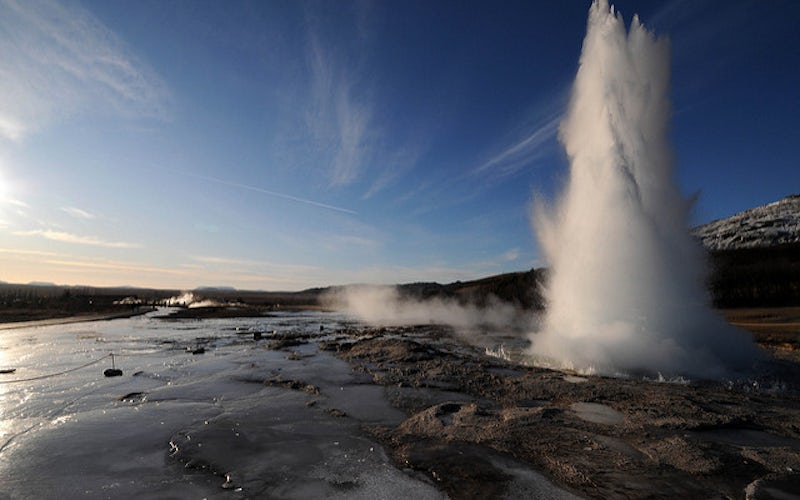 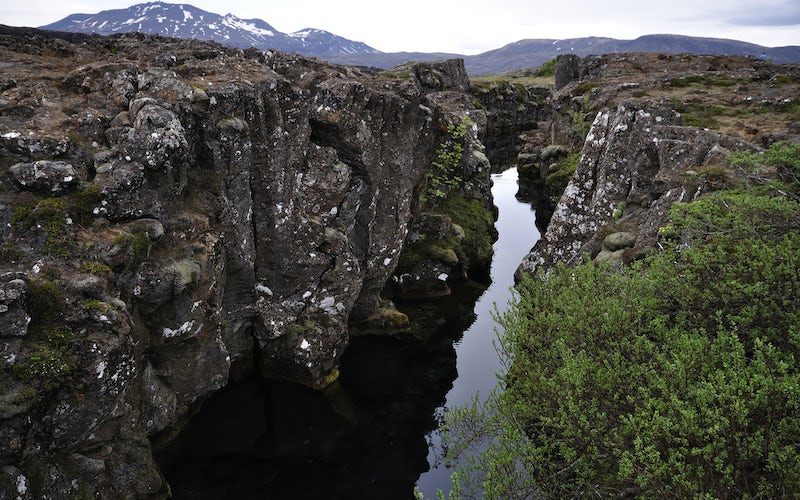 If you choose to ignore the ubuiquitous Golden-Circle-day-tour-advertisements from bus companies and drive the route yourself you have the advantage to plan the trip according to your comfort.

The fact that the inlands of southwest Iceland have so many great things to offer, besides the Golden Circle, surprises me every time I leave home for rural adventures. I am not just talking about the nature, I am also referring to other things like restaurants, museums and other places I didn’t know that existed.

Here’s my selection of five wonderfully unique places in the countryside of the southwestern part of Iceland that serve as ideal detours for those who are driving the Golden Circle themselves.

The main focus at Friðheimar is tomatoes. Tomatoes are grown at the greenhouse and they are also the main ingredient in all the meals served at the restaurant.

The owners of Friðheimar are also horse farmers so there are usually plenty of horses wandering around in the back yard.

When I went to Friðheimar I tried both the tomato soup and a tomato based pasta dish—ravioli, to be precise. Home made bread was served with the meal and some delicious pesto as well. There was an abundance of fresh basil and tomatoes served with the food so for a moment I felt like I was sitting at a restaurant in Italy.

The restaurant is only open for lunch, you can make reservations here . 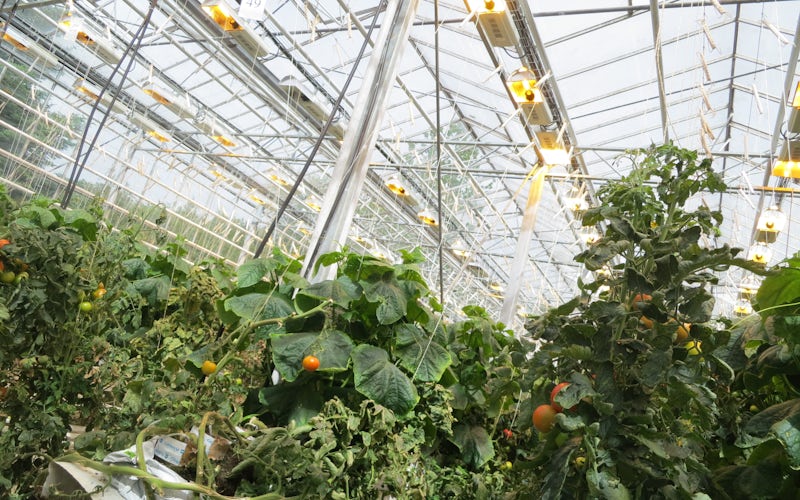 Tomatoes growing in the large greenhouse of Friðheimar. Photo/Wonderguide 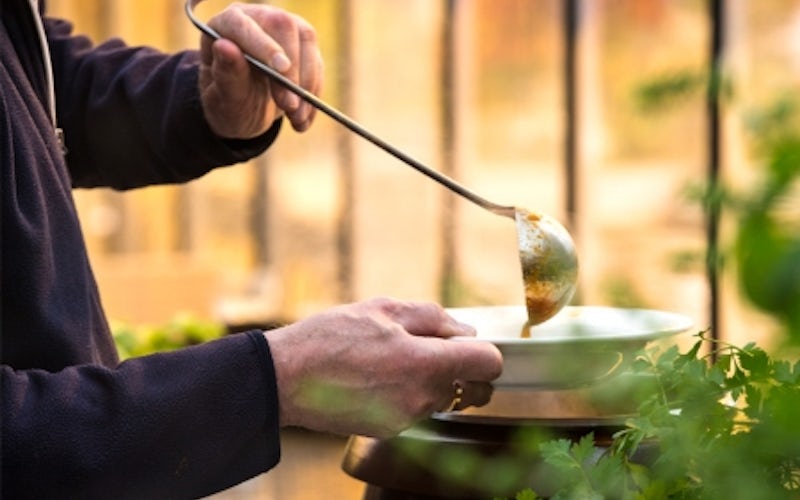 The tomato soup is made from local tomatoes. It's definitely worth trying. Photo/Courtesy of Friðheimar 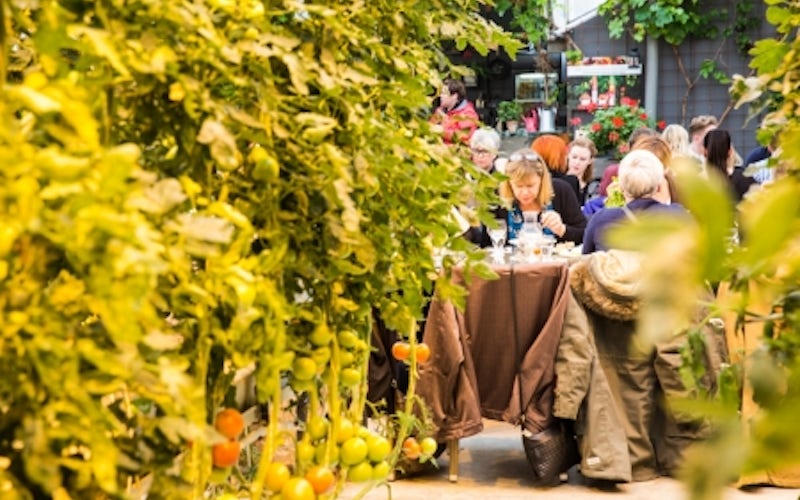 Lunch is served! Photo/Courtesy of Friðheimar 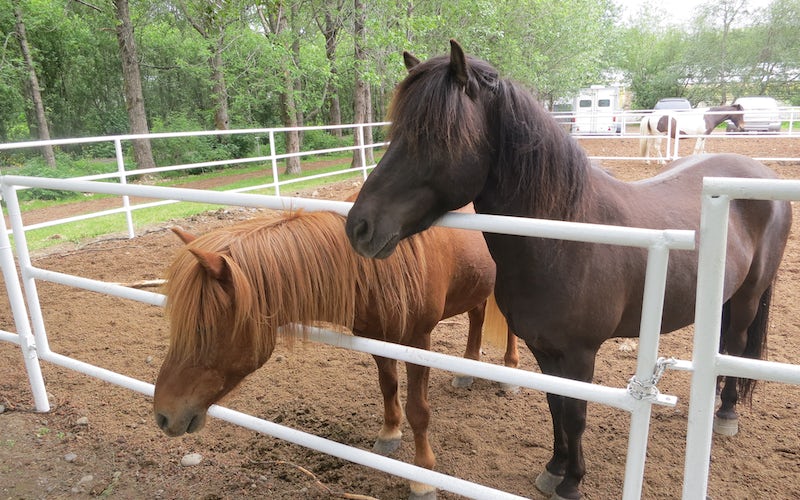 I said hello to these fellas outside of the greenhouse the last time I was there. Wonderguide/Nína

Sólheimar is a sustainable village in Iceland’s countryside. It was established in 1930 with the aim to create a small community for people with special needs and give them the opportunity to maximise their potentials.

Today, Sólheimar  Ecovillage consists of residential houses, a church, a gallery, a café, a sculpture garden, a swimming pool and other facilites for residents and visitors alike.

I have been to Sólheimar several times. There’s an unusual charm about the village and usually when I visit I'm craving to stay longer.

If you decide to visit Sóheimar, make sure you visit the boutique where crafts and artworks by the residents are sold. There are also frequent exhibitions at the gallery where the residents show their finest works. There are regular events at Sólheimar church, so you check out the schedule if you are planning on going.

There is an organic farm at Sólheimar and a great café serving high quality food and cakes and some great coffee. And the swimming pool, small but nice, is open to all visitors. 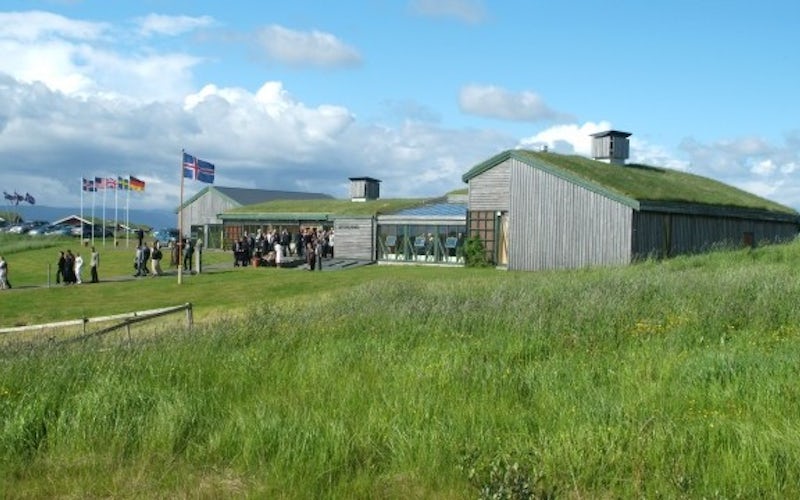 Laugarvatn Fontana is a warm pool and a spa in the small village of Laugarvatn. The village has for a long time been famous for its steambaths, which are now the main attraction of the Laugarvatn Fontana. The steam is completely natural since Laugarvatn is situated on a so called “hot spot” and the baths are heated by natural geothermal water (like most pools in Iceland).

The Fontana was established only a few years ago. The facilites are superb and soaking in the warm pool is extremely relaxing.

The Fontana is located just metres away from the bank of Lake Laugarvatn and there’s actually a small wooden walkway from the Fontana to the lake, for those who are courageous enough to jump into the cold water.

If you are hungry after the soak, you can visit a local bakery selling “hverarúgbrauð” which is basically a rye bread baked with geothermal steam! 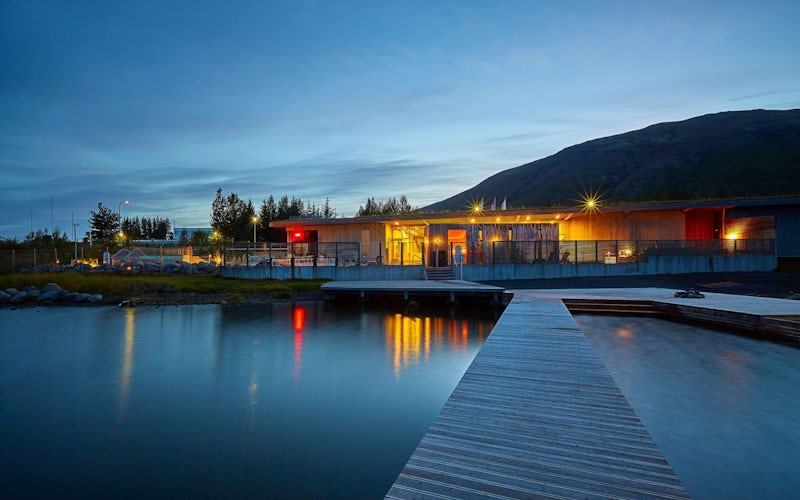 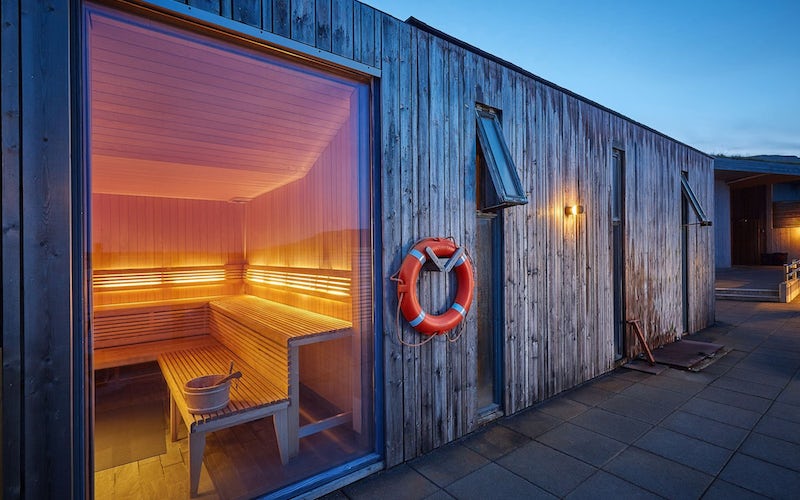 Last summer I stumbled upon a fantastic restaurant/ceramic studio called Bragginn . Its location, near to Flúðir , is probably one of the countryside’s nicest spots with a gorgeous view of two of Iceland’s most famous volcanoes: Hekla and Eyjafjallajökull.

Bragginn’s aim is to serve fresh food from local ingredients. My brunch plate included fresh eggs, home grown rhubarb and strawberries, Icelandic barley and tons of herbs and vegetables from the garden.

The brunch came with coffee served in a beautiful ceramic pot, crafted at the studio, and a glass of rhubarb soda. This fizzy rhubarb drink was delicious so we decided to buy a bottle of home-made rhubarb syrup to make our own rhubarb soda at home.

Bragginn wasn’t crowded at all. I had never heard of the place before and its location is quite remote. I recommend that you visit Bragginn in good weather since it’s simply wonderful to enjoy the meal sitting outside on the porch while you gaze at the volcanoes. 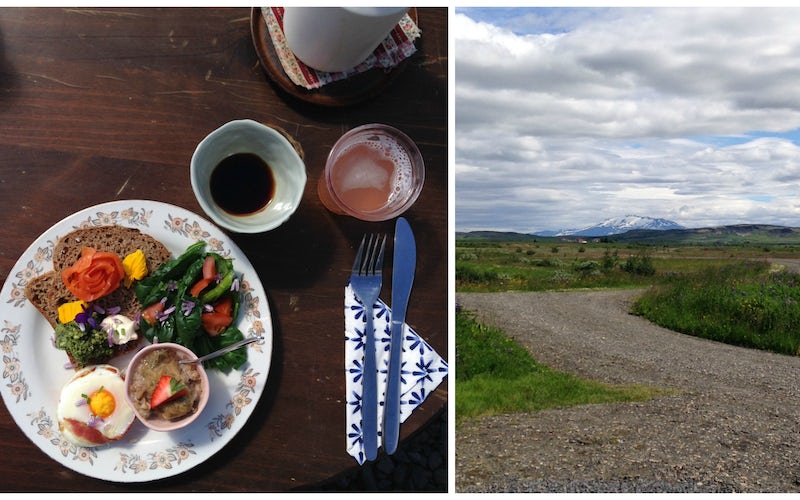 The epic Icelandic bruch platter, coffee and rhubarb-soda. Eyjafjallajökull on the right. Photos/Wonderguide 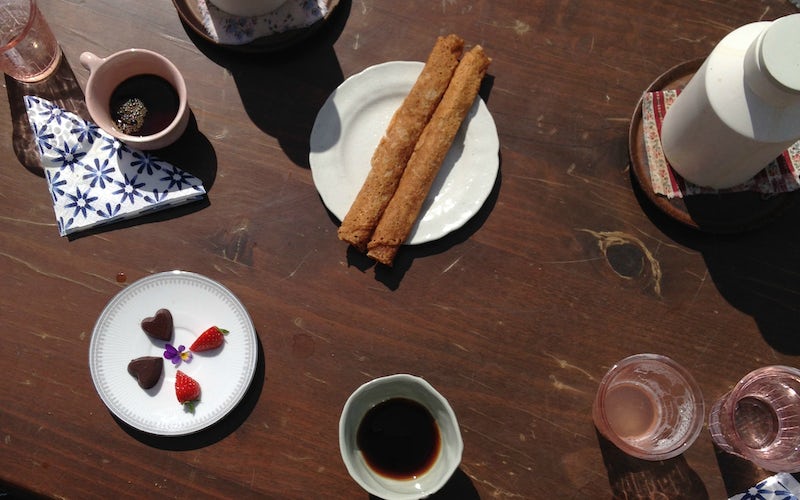 I felt I had to mention the Secret Lagoon as well. I didn't put it on the list though, since I actually haven't been there yet.

The Secret Lagoon is a natural geothermal spa near to Flúðir. Facilites were built there a few years ago so you have to pay an entrance fee.