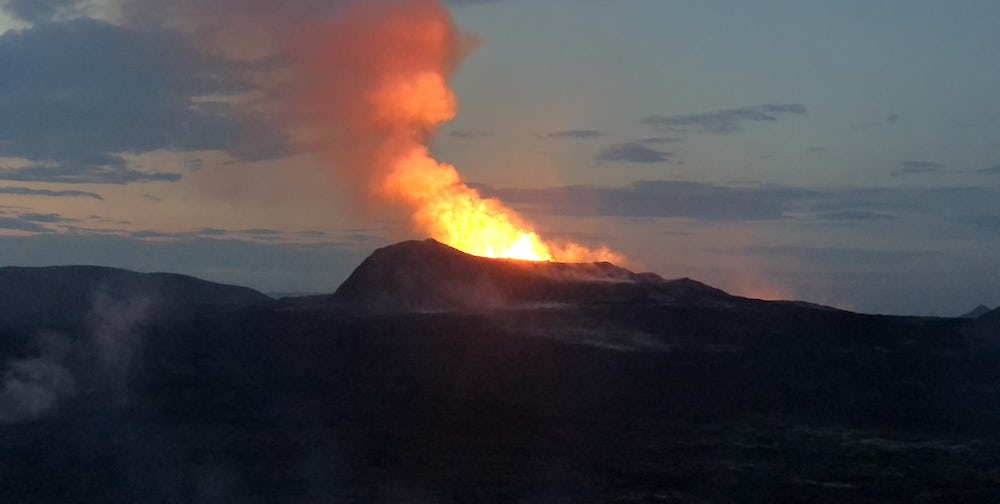 Everything You Need to Know before Visiting Fagradalsfjall Volcano, Iceland

The Fagradalsfjall volcano has attracted thousands of people since it started erupting in the spring of 2021. In this article, I will share a few tips to make sure you get the most out of your volcanic experience. Enjoy!

In the 19th of March, 2021, an eruption started in the southern part of the Reykjanes Peninsula, roughly 20 miles from Reykjavik. Due to a series of tremors that had started in the area some weeks before, the eruption was anticipated. Many people were extremely excited about it, mostly due to the closeness of the volcano to the capital city. If you're lucky enough to be in Iceland, read on to find out more about the magnificent Fagradalsfjall eruption.

Within a few hours from the start of the eruption, people started flocking to the volcano to see it with their bare eyes. It soon became clear that the eruption did not pose any serious threat to the towns nearby, and that it would be relatively safe to walk up to the fissures to witness nature in action. 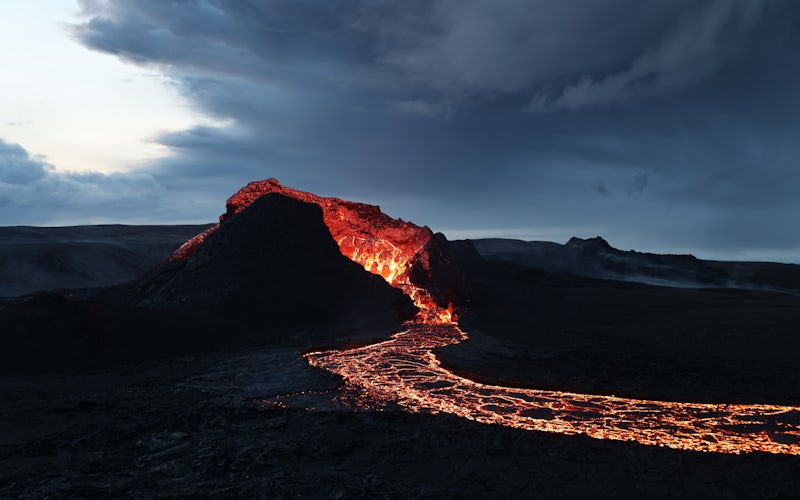 The volcanic eruption in Fagradalsfjall has been ongoing for five months now. It has evolved somewhat during that period, and the activity of the current craters varies from day to day.

I had been planning to go and see the eruption for some time, but one night in July when I could actually see the volcano pretty well from Reykjavik (meaning, it was pretty active that evening), I finally decided to go. 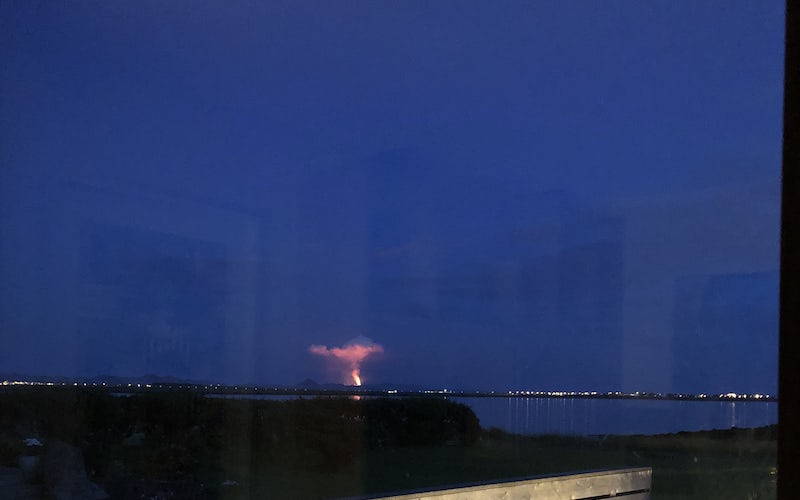 The eruption seen from a living room window in Reykjavik. Wonderguide/Nina.

We drove to Grindavík and then onwards to the parking lot by the volcano (the route is depicted on the map below). We could choose from two different walking paths and decided to take the one that goes to the left when the main hiking path splits into two. It took us around 30 minutes to hike all the way to the top of a mountain adjacent to Fagradalsfjall which offered splendid views of the crater. During the hike, we could also see huge fields of hardened lava from the eruption in Geldingadalir.

The view at the end of the footpath was absolutely gorgeous. We stayed for almost an hour, absolutely mesmerized by the beauty of the eruption. It was so magical, and surely beyond what I had hoped for (nota bene, my expectations were quite high). July is a bright month so it wasn‘t dark although we showed up around 11pm. 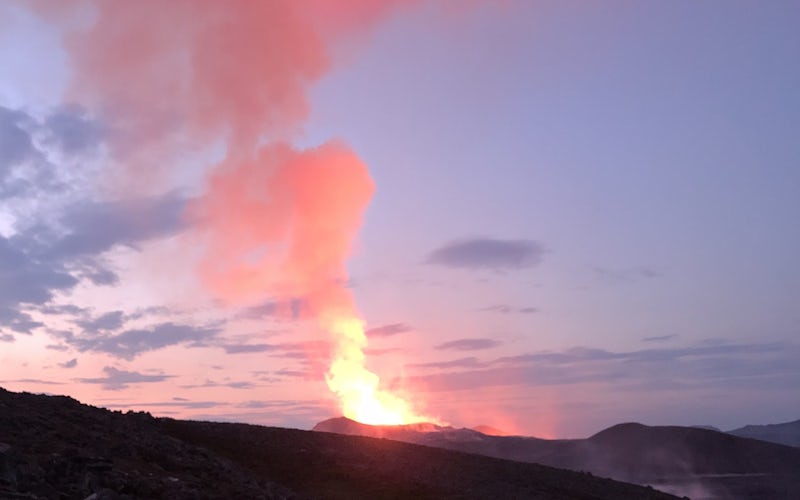 The eruption at dusk. Wonderguide/Nina. 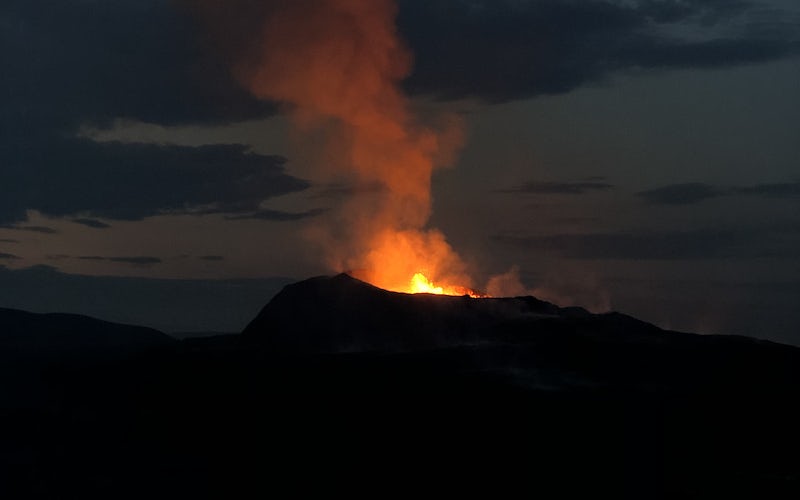 This one is taken a bit later in the evening. Wonderguide/Nina.

I think dusk is probably the best time of day to view the volcano. Be sure to carry a cell phone with a flashlight or a headlight since the footpath is not lit up.

The footpath is better than I had expected, but the hike is quite steep at times. Dozens of people have broken their legs during the past months, particularly during the decent. Hence, I advise you to be extra careful and to wear suitable shoes, preferably hiking boots. Also, make sure you‘re wearing suitable hiking clothes. Bring a bottle of water and some snacks, just in case.

The conditions might have changed from the time that this article is written, so make sure to find up to date information. An erupting volcano does not abide any rules; new fissures keep opening up in the area and lava keeps emerging from the current craters. In fact, the first hiking path paved in the area was eventually flooded in lava in June. So you never know what is going to happen to the current hiking paths. 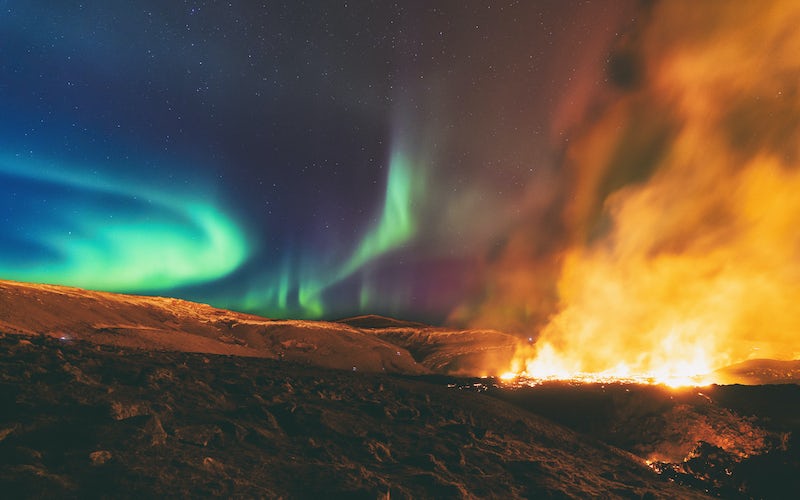 During wintertime, the northern lights may show up at the eruption site. Unsplash/Jonathan Pie.

Is it dangerous to go up to the eruption?

If you are cautious, it should not be dangerous. Here are a few safety tips:

When will the eruption be over?

Nobody knows. According to scientists, there is a possibility that it might go on for a couple of years. However, there is also a chance that it will come to an end much earlier – even within a few weeks time.

When is the best time to go see the eruption in Fagradalsfjall?

As previously mentioned, the activity varies from day to day. You can monitor the eruption here. In my opinion, you should not plan which day of your trip you are going to see the eruption. You should rather keep your schedule flexible and head straight out of town when the time is right.

Is it possible/advisable to bring the kids along?

If they are still tiny, you can bring them in baby carrier. The path is not suitable for strollers or pushchairs.

What facilities are in the area?

There are no facilities in the area. Bring your own snacks and pee before you leave the house! However, there is a short drive to a nearby town called Grindavík if you desperately need something.

How do I get to Fagradalsfjall?

Drive from Reykjavik to Grindavík. From Grindavík, take road 427 which takes you towards the mountain. In five minutes or so, you will reach the parking lot.

Hike To The Active Volcano
Experience·$94

Hiking Keilir: A Peaceful Escape on a Volcano
Story